It was just a normal morning. Big Onion and I had to work so we both dragged ourselves out of bed before dawn, bundled up against the freezing temps, and headed out for morning chores in the frosty dark.

Groggily, I fed each of the rabbits, refilled their hay and water then set to work milking our two new momma goats, Eve and Amelia, while Big Onion busied himself feeding the poultry and the rest of the goat herd.

I was just finishing up feeding Amelia when I heard Big Onion calling to Rialey. She wasn't with me in the milk room which was odd in itself. Even weirder that she wasn't with him either. A few minutes later, he peeked his head in the milk room to tell me that Rialey was running back and forth along the pasture fence while a wild cotton-tailed rabbit was just sort of sitting there looking at her.

I finished up with the girls then followed him around the back of the poultry pens to see Rialey running up and down the fence line and making the whining, yelping sounds of a very upset farmdog. We spent a moment amazed at how calm the rabbit was acting despite the crazed dog and gawking humans standing less than 10 feet away. We tried to explain to Rialey that not all rabbits are hers and called her away to go and quickly check on the sheep before heading in.

On the way back from our visit with the sheep, we saw that same rabbit. This time it was hopping around the goat yard. It only took a second for us to realize that that wild rabbit was looking way too fat and fluffy. Right then it hit me. Jane (Jane Doe, ha ha) had been working on a small hole in the back corner of her pen for a while. When I fed her, I assumed she was just hiding in the small crate we keep in the rabbits' pens to make them feel more like they have a den in which to hide.

One quick glance into the pen, and I confirmed that that "cotton tail" we had been oo'ing and ahh'ing over in the neighbor's field was in fact our very own, very pregnant rabbit on the loose. No wonder Rialey had been throwing such an unholy fit! One of "her" bunnies was out of place!

I quickly put Rialey out of sight so that she wouldn't give chase and stress out the poor mother bunny any more than necessary then grabbed the fishing net we keep on hand for just this occasion. Big Onion and I managed to herd the doe into the milk room where she hid under the shelving there. Rabbits have surprisingly poor vision so I placed the net over one opening while Big Onion shooed Jane in my direction. In just a few minutes, she had hopped her way right into the net where I was able to scoop her up and into my arms. 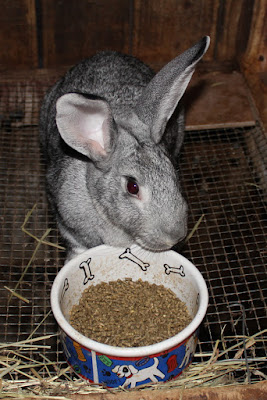 We got her settled with fresh food, water, and hay in an empty pen until we could repair her escape hole then had a hardy laugh at ourselves as we finally headed back up to the house for not being able to tell the difference between a fat rabbit and a wild hare in the early morning light. Next time maybe we'll actually listen to the dog!
Posted by Kaela at 8:53 AM 1 comments