Our not so lucky Clover

Right now we are keeping the boy and girl goats separated so we alternate who gets access to the big pastures in the back. This morning it was the girls' turn so I grabbed scoop of corn and called the girls and Rialey to follow me across the bridge. Once Rialey and I had all the lady goats, I closed the gate and tossed the corn. Rialey knows the drill by now and was ready when the sheep came flooding over the hill to try and steal the goat ladies' breakfast. She chased them back over the hill, across the second pasture, then up and through the gate to the third pasture then headed back to my side.

On a whim I decided to take a walk out to the third pasture to check on things. Rialey did her usual happy lap around the second pasture then bounded through the gate and into the third ahead of me. She was running and sniffing and generally enjoying being a farm dog. She ran over to the ponds. On hot days she likes to take a plunge and cool off, but this morning the frost had just melted from the grass so I was surprised when she dove out of site down to the water in the first pond. Oh well, she's never been bothered by the cold so I let her do her thing while I continued my walk.

Pretty quickly I realized something wasn't quite right. I could see the big, poofy fluff of her curled tail sticking up above the brush, and it was vibrating like she was trying to catch something. Concerned that maybe she'd tried to take on a snake or other vermin, I headed over to find Rialey trying her best to grab and pull something up and out of the water. On closer inspection I realized it was Clover, one of our lambs. Clover was one of a set of twins born on Saint Patrick's day. She and her sister, Coleen, never did get very big and seemed always to need deworming. I guess when the flock rounded the corner by the edge of the pond little Clover got knocked in. 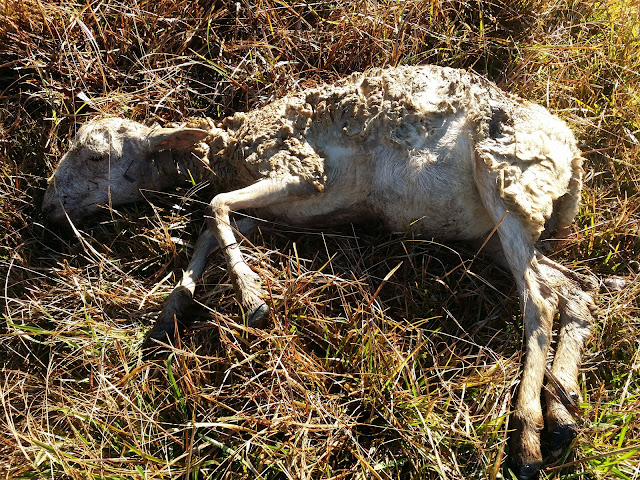 I told Rialey to back up then pulled the lamb out of the water. She was a soggy, muddy mess! She felt very warm and was breathing heavily like she had been running so I knew she hadn't been in the water very long. 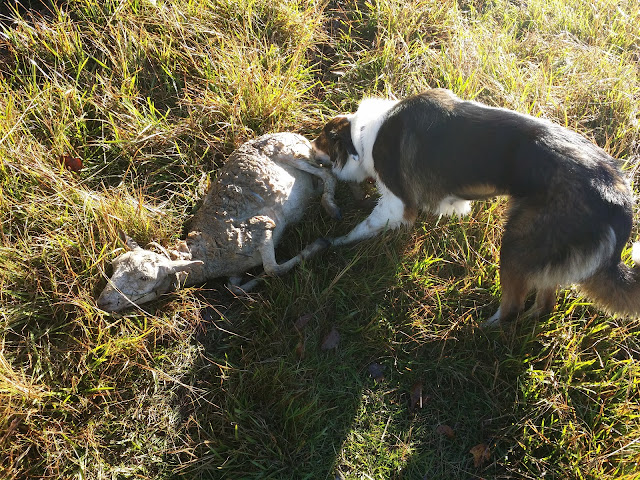 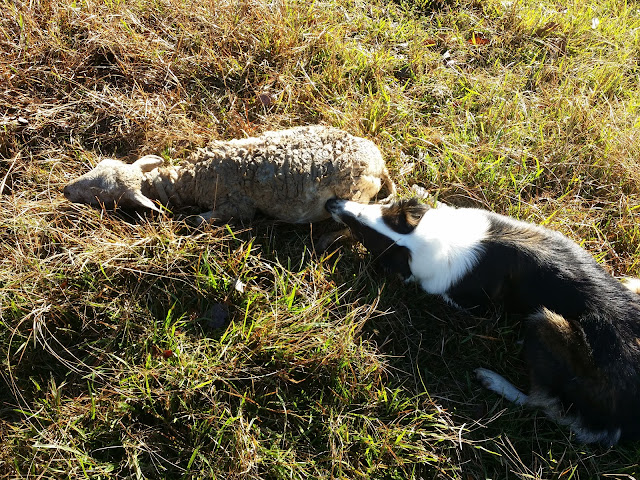 Rialey immediately set to work licking the sodden, pathetic creature and pulling the debris from her coat. The she started trying to get Clover up by grabbing big mouthfuls of her wool and attempting to pull her to her feet. I knew that Rialey's attentions weren't go to work so I called her off and put her in a down stay a few feet away. Once a lamb goes down, they will just lay there and seemingly wait for death. No amount of poking, prodding, or pulling will get them to their feet. The best thing to do is back off and usually the little one will get up on her own once she thinks the danger has passed. 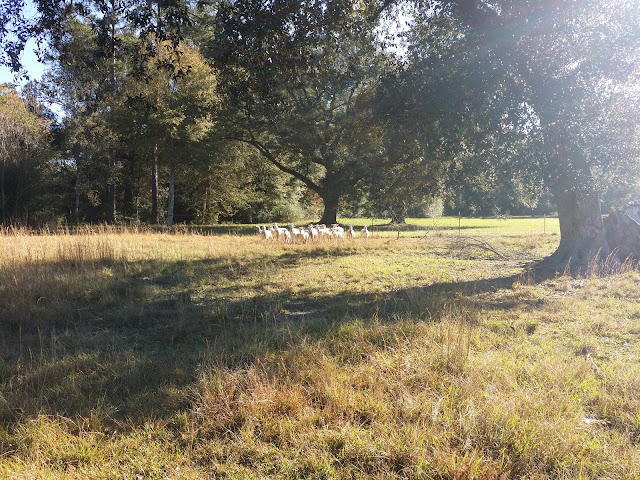 The rest of the flock were not to far away so Rialey and I left Clover to warm up and dry in a sunny spot while we went back to finish chores. 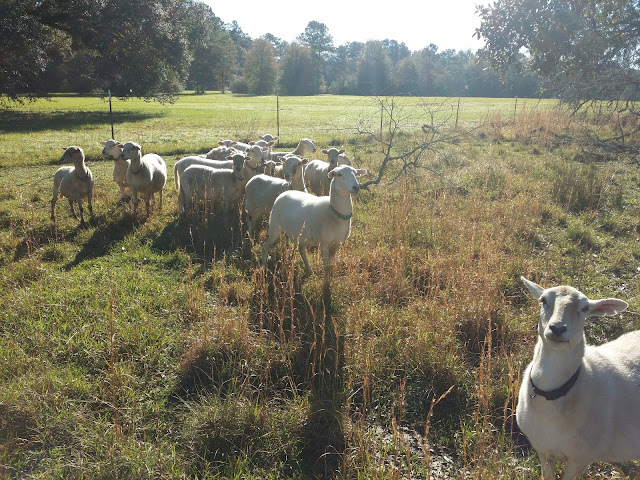 Halfway thru morning chores I decided it might be a good idea to give the weakened, stressed out, lamb a little energy boost so I mixed up some molasses and vitamins and headed back out. I was encouraged to see that Clover was no longer in the spot where we left her, but when I called over the flock she was not with the group. 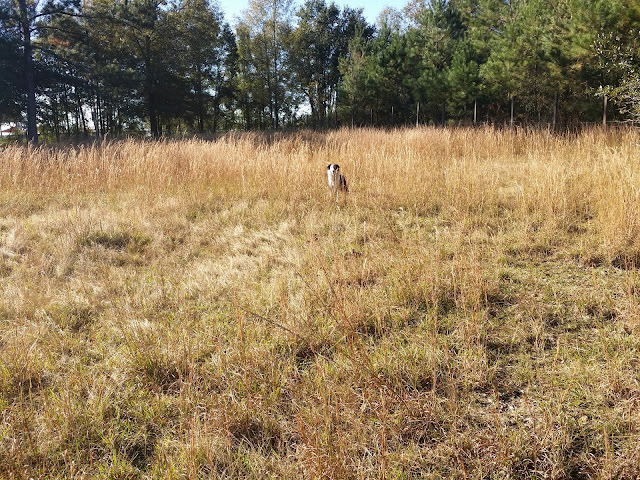 We backtracked to where we left the lamb, and I asked Rialey to 'hunt it up.' She took off like a shot following a scent trail! I was so excited that she seemed to be on the right track until Ry dropped face first to the ground and started rolling in some god-know-what smelly patch that she was delighted to have found.

Eventually we made our way to where the flock was grazing and again I asked Rialey to search for the lamb. Don't ya know, she actually found the little one laying down in a tall stand of grass not far away! 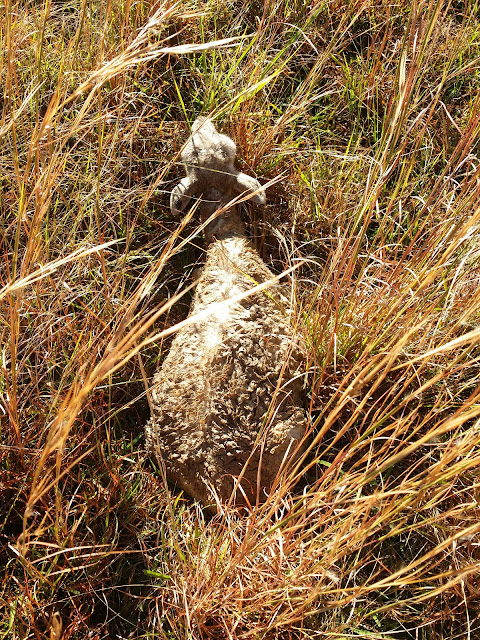 I gave her a couple syringe fulls of my mixture and moved her into a more accessible and sunny location. We left her again to recover and hopefully get back on her feet. 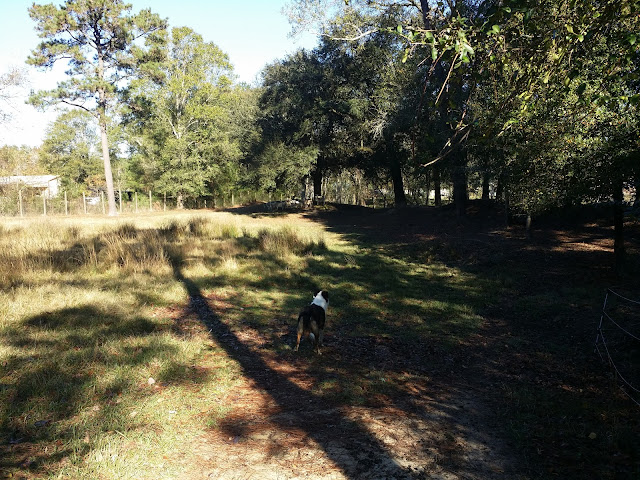 I had Rialey move the flock back to the pasture near where we left the little one to encourage her to rejoin the group then we headed back up front to finish chores. We let the boy goats out of their pen, fed the rabbits, and released the poultry to free range for the day. Once everyone was taken care of, we headed back one more time to check on miss Clover.

Once again she had moved from where we left her. This time Rialey knew just what to do. I asked her to find the lamb, and she dropped her nose and started very obviously following her tracks. Though the tall grass, across the pasture and back up again, Rialey never lost her trail. Every once in a while she would throw a glance back in my direction like. "Well? Are you coming?!" When I saw her fluff of a tail stop in the tall grass and her head pop up to look back at me, I knew she'd found Clover for me again!

The lamb was looking a little more alert, so we decided to leave her for the day to warm up and get her strength back. Obviously she was able to get up and move around so I suspected that she would be fine. 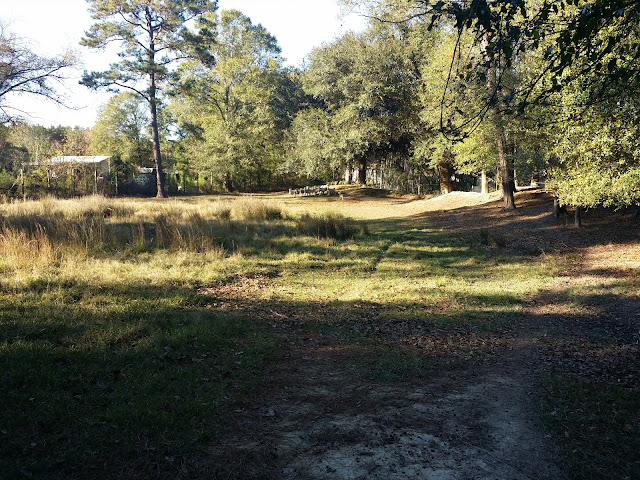 This afternoon we went out for one more check on our errant lamb. I put Rialey in a down stay and called over the flock. Unfortunately, little Clover was not with the group. I called my trusty farm dog and we once again set to work finding the lamb. Rialey dutifully checked every place we'd found Clover this morning before dropping her nose and starting to search. I was about to give up hope when I saw the pup give two giant leaps into the chest high grass then I heard her give a loud "WOOF!"

I bounded through the grass to find that sure enough she'd once again found that lamb! I gave Rialey tons of praise and a handful of treats. Clover was just laying there while Rialey did her damnedest to get her up. At least at this point she was mostly dry and holding her head up and looking around. I called Rialey off and stood there trying to decide what to do now. Was she so weak that she could only get up and stumble around then fall again? Should I bring her up front so that we could watch her more closely? She was way too heavy for me to carry all the way back up front. On the way out I'd noticed that some evil animal had disconnected the fuel line from the four wheeler...again so that wasn't an option. While I stood there contemplating dragging the garden cart all the way back there and looking out over the field, wouldn't you know that lamb popped up and took off at a run across the pasture!

Guess she wasn't that weak after all! Rialey and I kept our distance, but I let the dog gently herd the lamb back up to where I knew we'd left the rest of the flock. She is that tiny dot in the above picture rejoining the group. Hopefully she is finally recovered from her ordeal of the day, and we won't have to do any more lamb tracking. 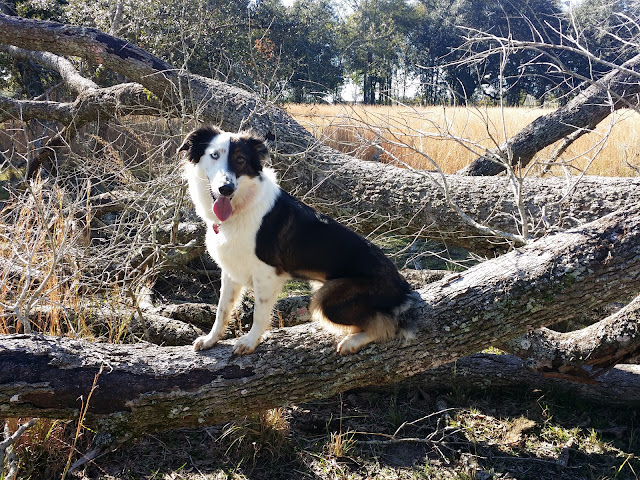 I am thankful every day that I have an awesome farm dog at my side whenever I step foot on out the farm. Without this dog, that lamb would surely have died in that pond and there was no way I would have found her over and over again hiding in the brush. Today Rialey showed the skills that make English Shepherds such indispensable farm assistants. She went from herding sheep, to caring for a lamb in danger, to tracking her when she was missing. That's my good girl!
Posted by Kaela at 3:39 PM 1 comments