It's been a heck of a long time since I posted anything, but I thought I would jump right in with a little story from this morning on the farm. My mother is currently visiting. She came out to give me a hand with morning chores this morning. I was wearing Elliot on my back since he's just old and mobile enough to cause himself great bodily injury if left unattended in the house for more than five minutes

We'd taken care of the mule and all the goats that live up front by the house. We were out at the barn, and mom had gone out back to let the birds out when I heard a weird sound. It was the call of a sheep in distress or discomfort. I wheeled around and immediately spotted a sheep on the ground. A closer look revealed that it was Emily, one of last year's lambs, and she was pretty obviously in labor. I could just see the white tips of a newborn lamb's hooves peaking from her backside. This was a real surprise because we were pretty sure we were done lambing for the year. We figured Emily was just a bit to young to catch during breeding season. Apparently we were wrong.

As I watched, she got up and laid down again, alternately pushing and resting. I could just see the two little hooves and a nose appearing and disappearing again as she pushed. I called mom to come quick so she wouldn't miss this lamb being born. We stood and watched and waited, but momma wasn't making any progress. The stuff hanging from her backside looked suspiciously dry, like she'd been pushing quite a while. She was looking very tired, and I was pretty sure we would have a dead lamb on our hands if it had been stuck as long as I suspected.

I decided to intervene. It was pretty obvious that this lamb was trying to come out with its front legs tucked back. It's front legs and nose were trying to emerge at the same time which jams up the shoulders and makes it a lot harder for them to pass through the birth canal, also called an elbow lock. I'd seen it before in the goats. I got Elliot out of the carrier and handed him to Mom. I knew I would have to chase this ewe as she was one of our least tame ladies, and I really didn't want to stress her any more than she already was. I moved slowly and after a short chase, I was able to grab a back leg and then the rest of her. I carefully and gently laid her down on her side and used a knee to keep her from getting up and running off again.

At this point, Emily had sucked that baby back up and almost out of sight. I waited a few seconds for another contraction for the feet to emerge then slowly pulled one leg and then the other forward. It took quite a few pushes for the nose and mouth to emerge again. I hadn't felt any resistance or movement from the lamb as I pulled so I was sure we were dealing with a stillbirth at this point, but to my surprise and delight I saw that wet little nose twitch and the little tongue move! It was alive!

Momma pushed and I pulled those legs with one hand while carefully pushing back her vulva with the other. That baby was stuck but good! It took what seemed like forever, but eventually little eyes then ears emerged then the whole rest of the lamb sprung free! Momma laid flat out and closed her eyes, totally exhausted. The lamb hadn't even fully cleared her back end, but she did not care. I let her rest for a bit while that wet bundle of limbs that was the newly born lamb flopped around in the dirt trying to get it's bearings in this giant new world. 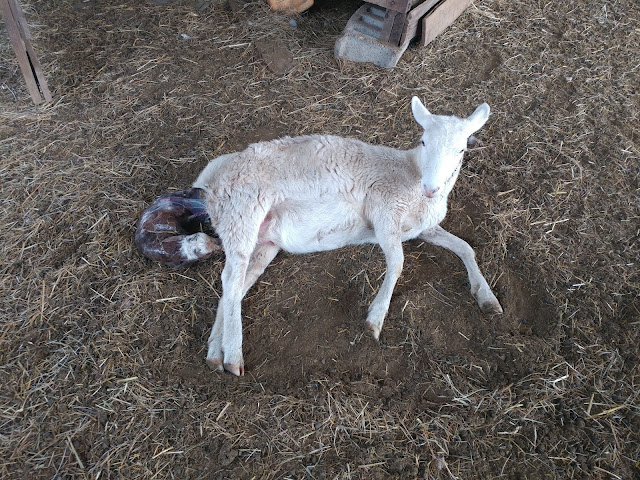 Eventually Emily came around and started talking to and cleaning her baby. Once she was on her feet, I got her and the lamb penned up in an enclosed area where no one could bother them with some fresh food and water. It was only after all was said and done that I thought to check the sex of the little one. It was a male, and a pretty one too. Dark brown with a mottled white face and small splotches of white on his body. We decided to call him Finnian. It wasn't long before he was on his feet and looking to nurse. We left mom and baby to do their thing. 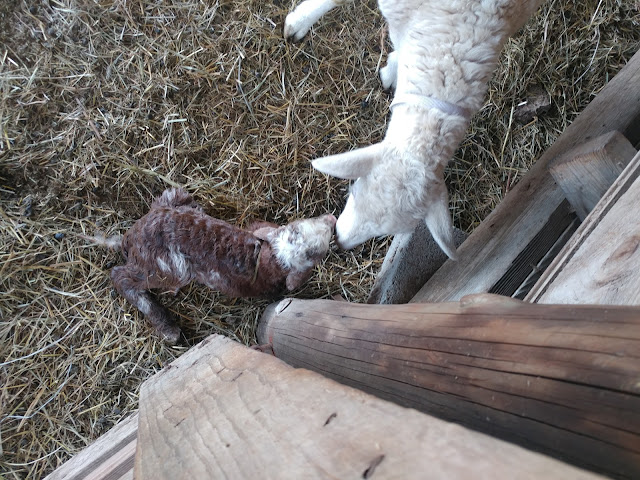 That evening little Finnian was nursing great and hoping around like little fool, and mom was happy to get some extra grain and hay for all her hard work.

It occurred to me that this not the first or even the second birth that Elliot has witnessed in his short life. This kid is going to grow up knowing exactly where babies come from in very graphic detail, and I think that's pretty cool. 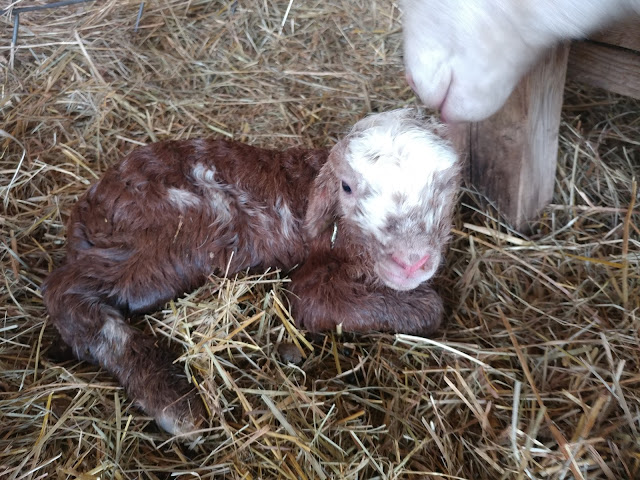