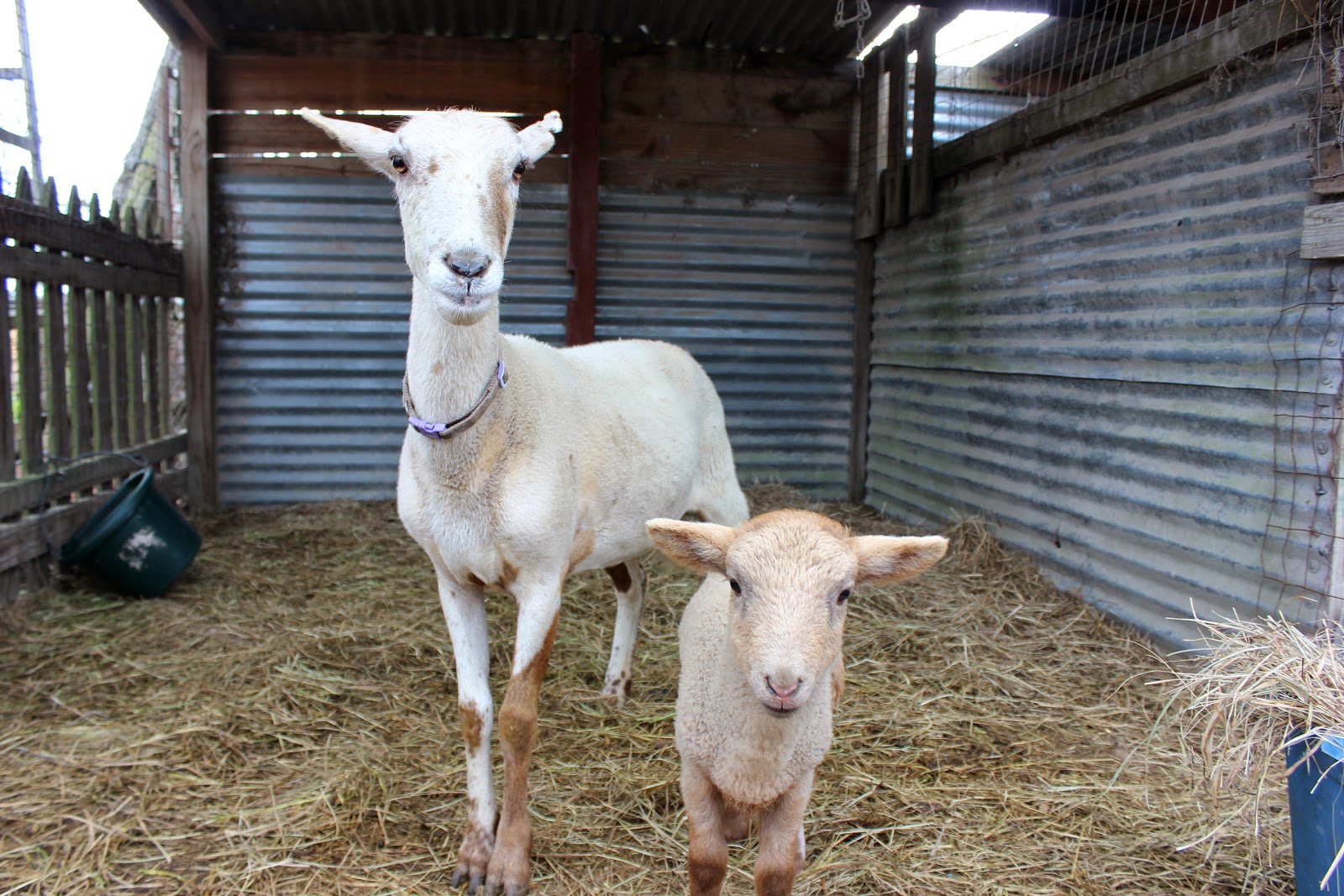 Everyone keeps asking us, "How's Buzz?" "How's that poor little sheep who got stuck in the fence?" I've been meaning to update everyone on the "little" guy, so here's the buzz with Buzz...

By the hairs on her Gwenny chin-chin 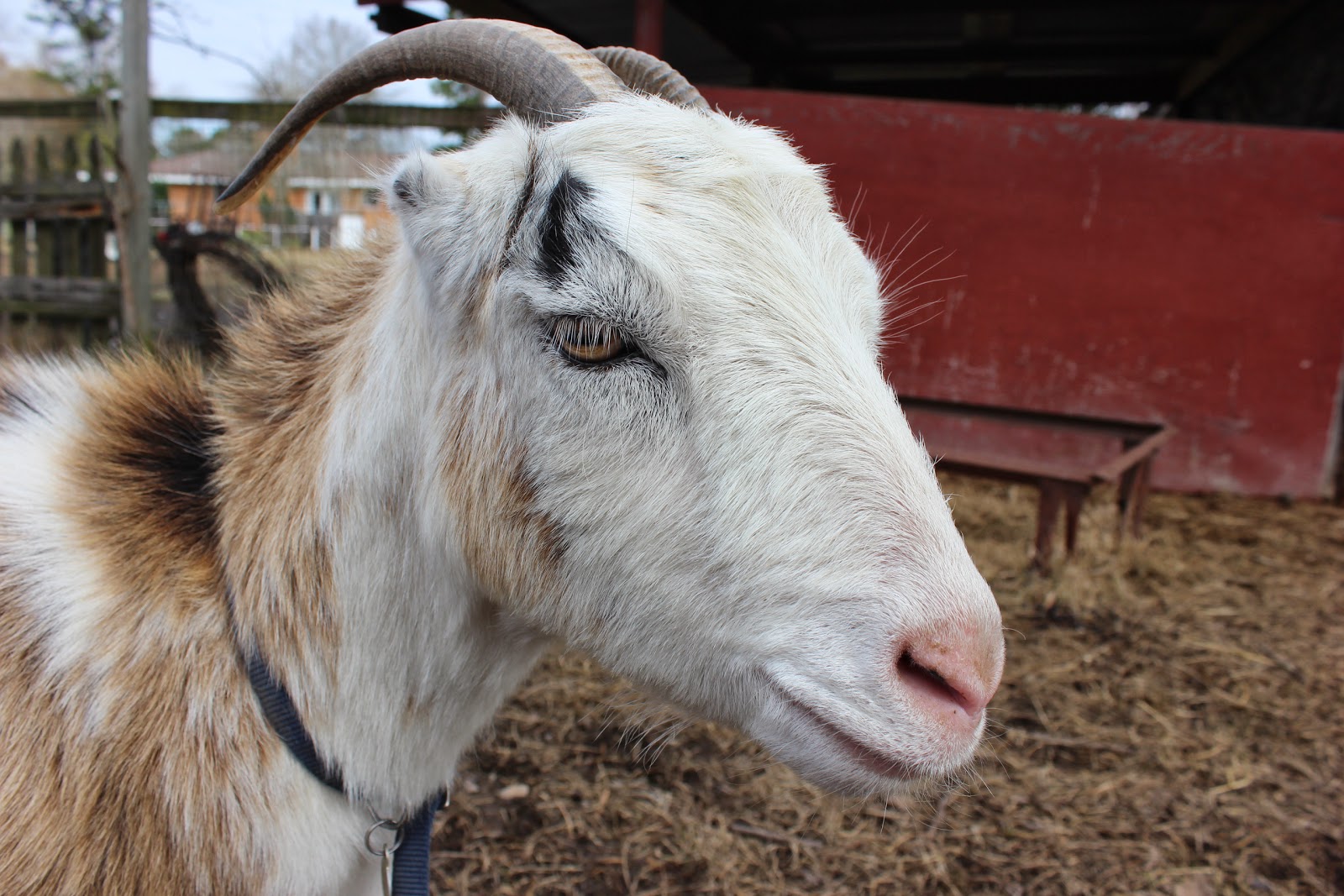 Our little Gwen is becoming a Lady! 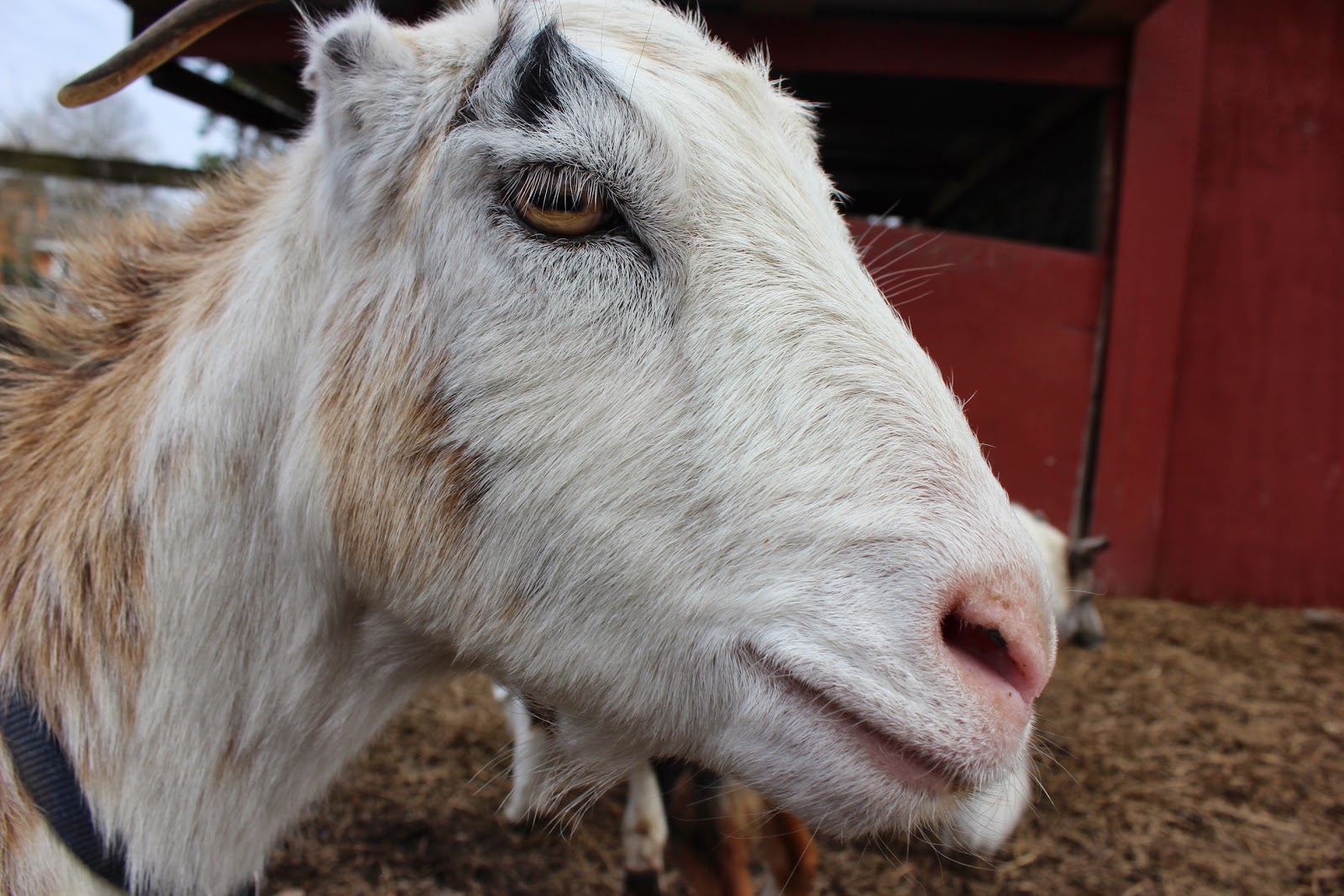 Look what just sprouted on her chin! 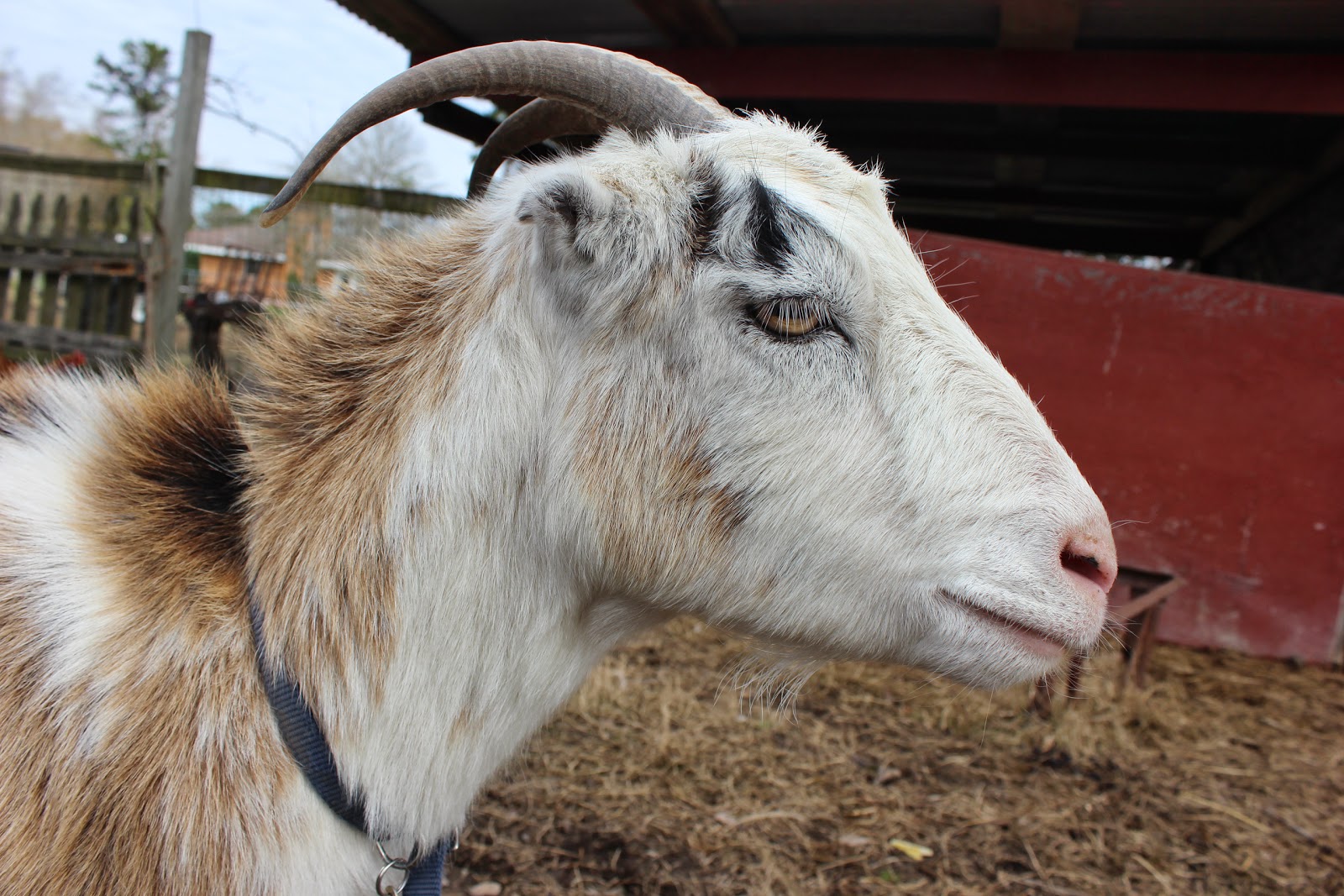 Her mother, Josie, has a pretty fantastic beard. Not all breeds of goats have beards, but we were hoping Gwen would grow one herself some day. We try not to make too many teenage boy with new whiskers comparisons. She is less than amused by that kind of talk. 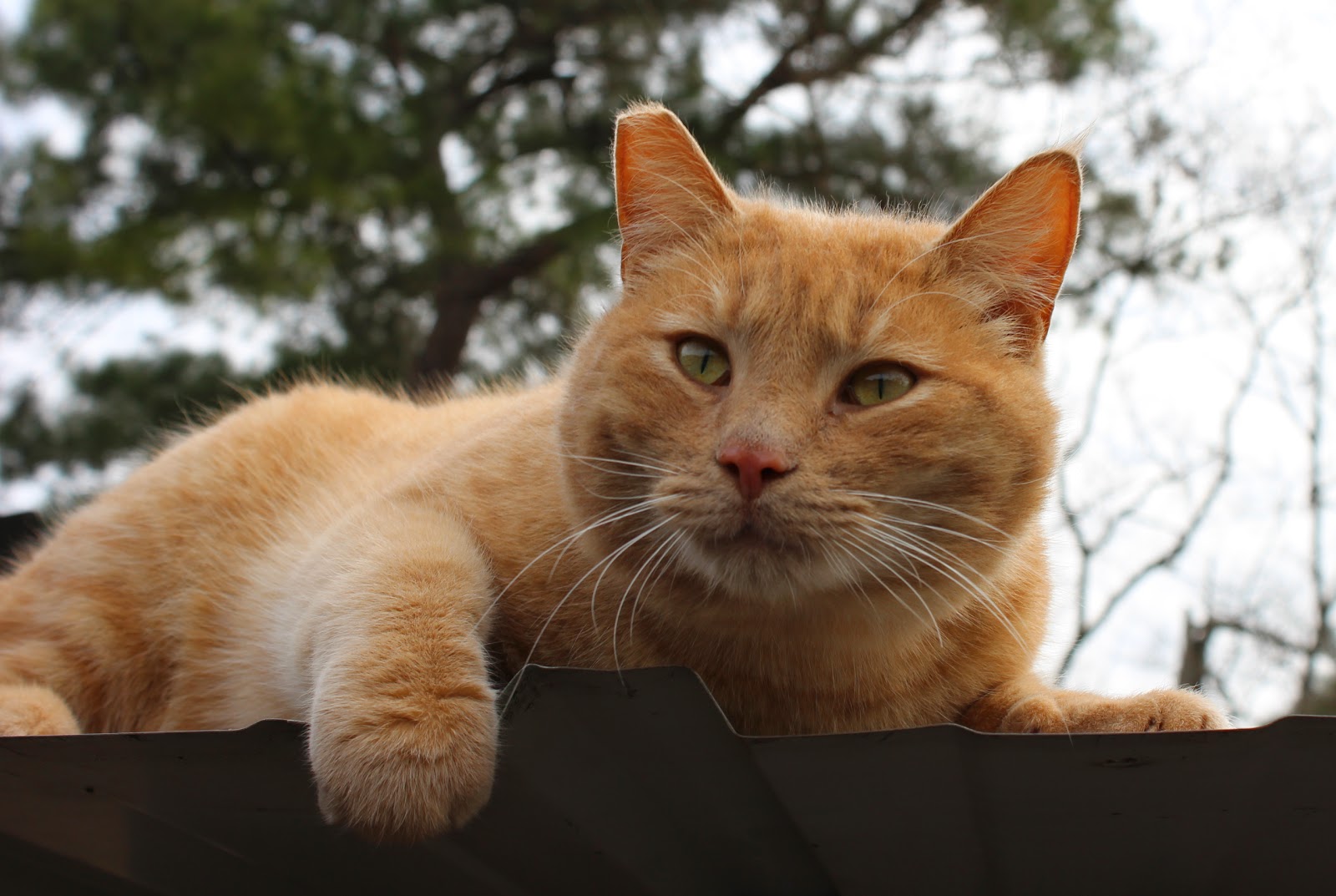 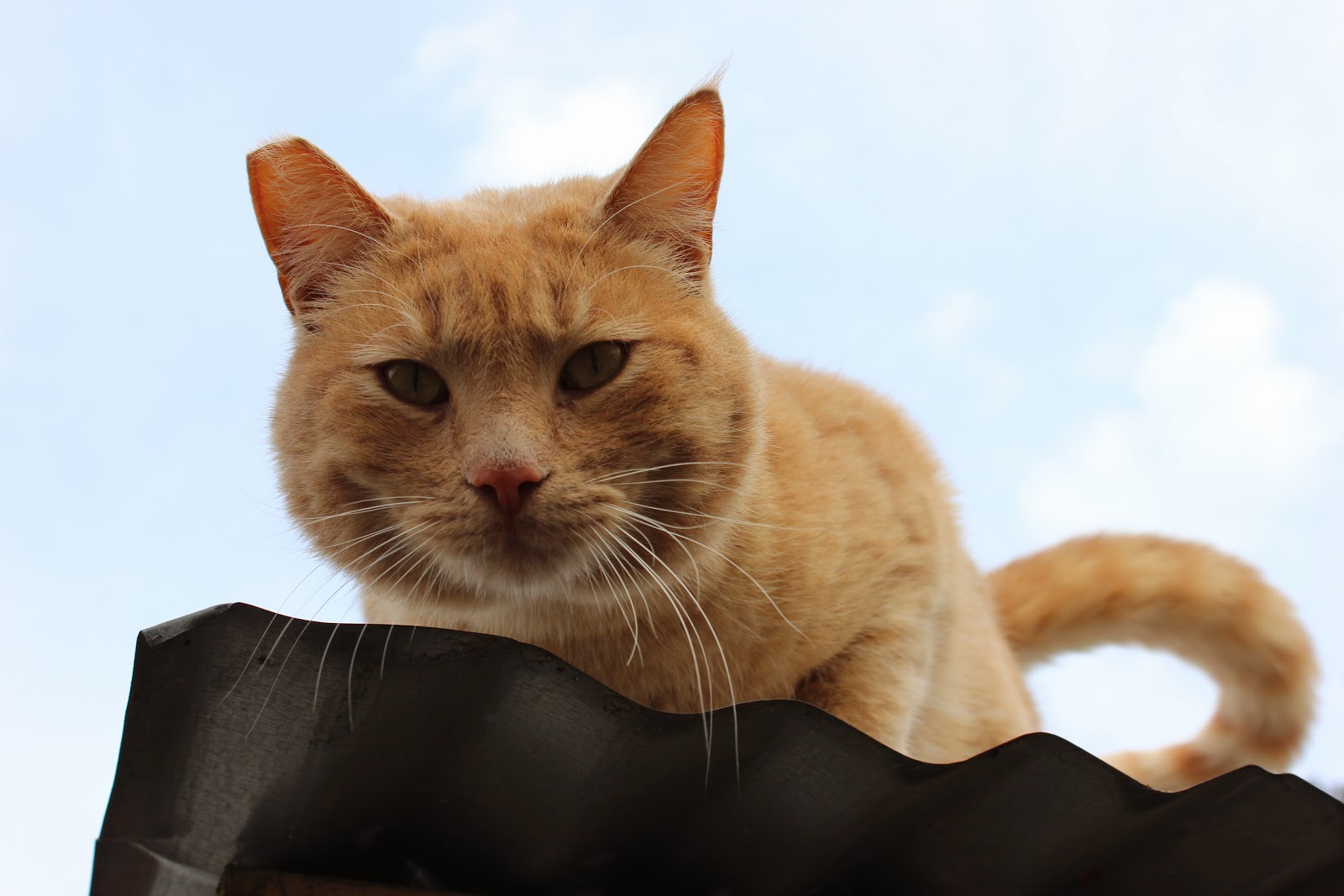 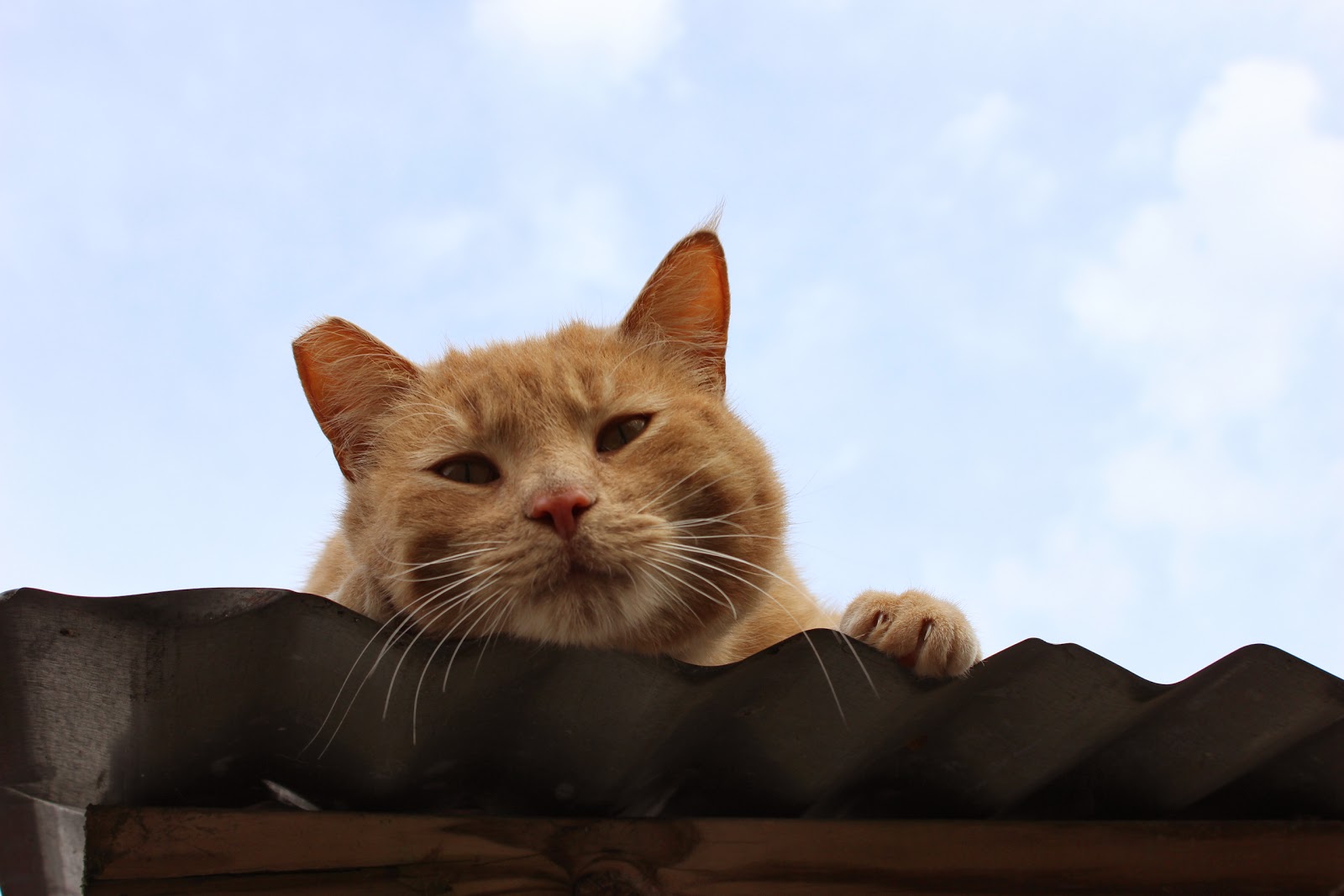 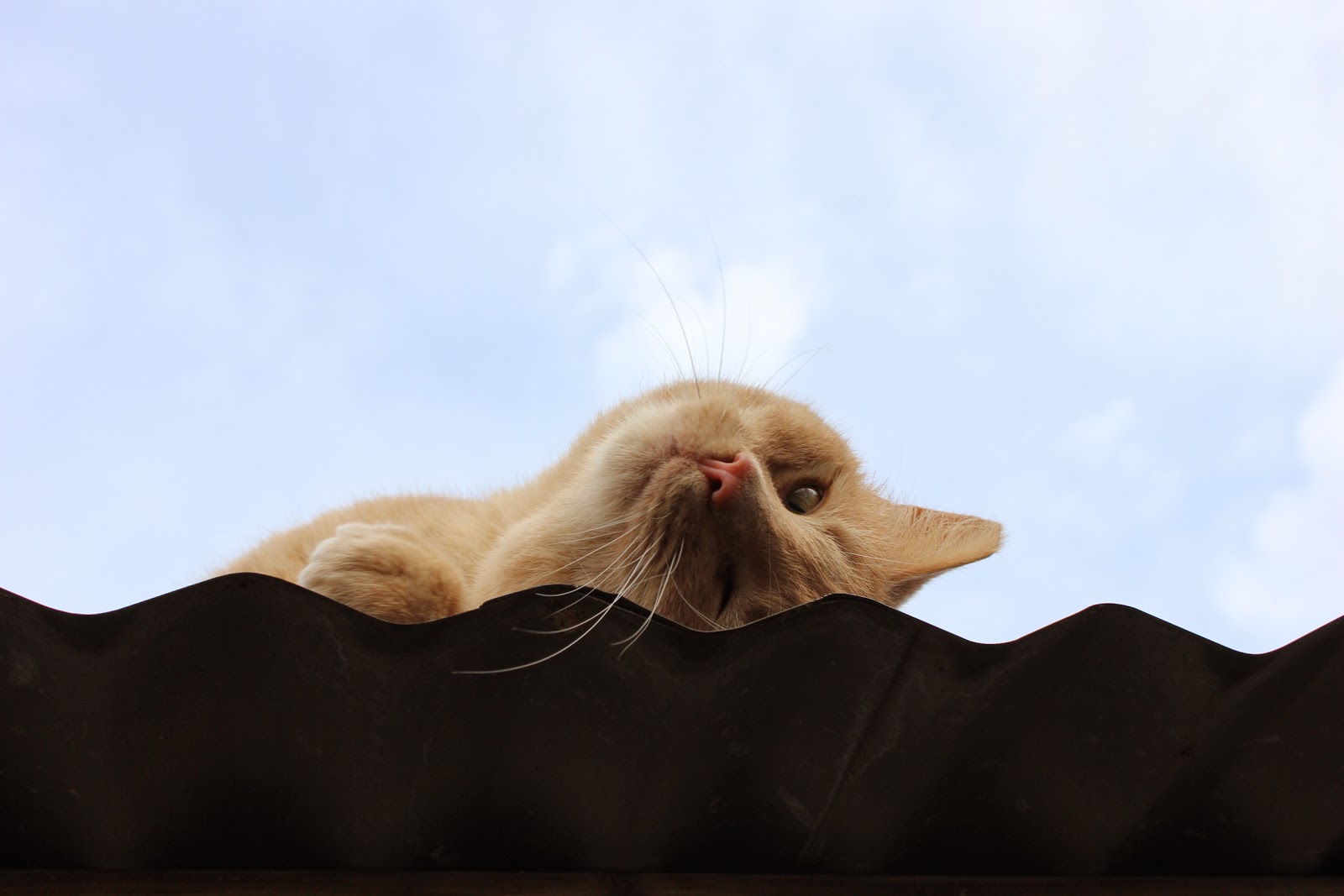 Our barncat is a goofball, but I have to say that we have not found any evidence of rodents at all since he came here! Thanks Blaze!

Email ThisBlogThis!Share to TwitterShare to FacebookShare to Pinterest
Labels: blaze 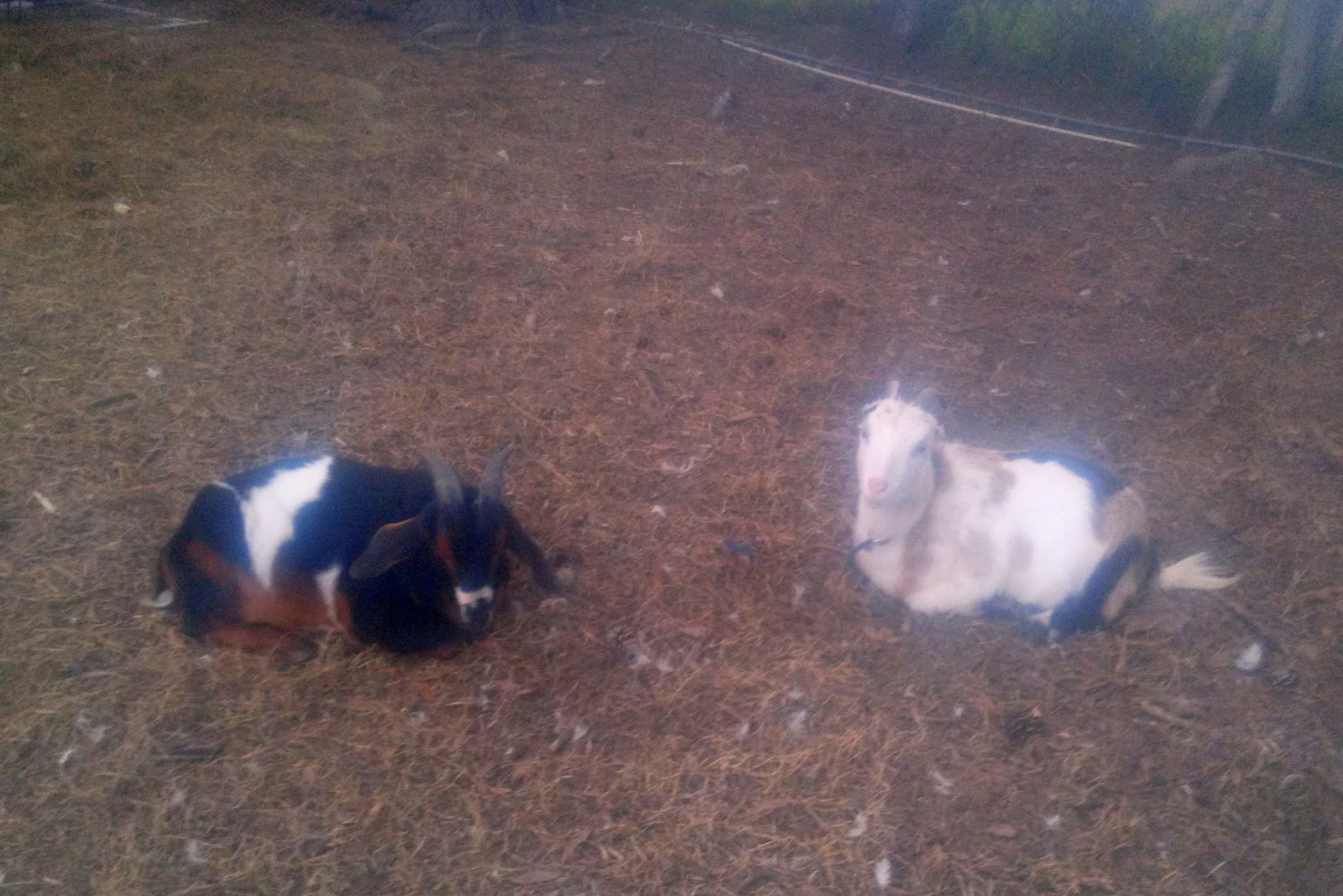 I should have known when I went out for chores one night and Luciano was hanging out with Gwen that something was amiss. You see, Luciano and Amelia are virtually inseparable. They are rarely more than a few feet from one another, but I was busy doing the usual evening chores, putting birds and feeding bunnies. By the time, I got around to feeding and milking goats, it was already getting dark. It was then that I noticed that Amelia was not with the group.

I grabbed a flashlight, called the two dogs, and headed toward the back pasture. I had a feeling I knew where I'd find her. I started calling her name as soon as I got out to the back pasture. I could just barely hear her calling back in the distance. I followed the sound and the instincts of my trusty farmdogs and soon enough we came upon one very unhappy goat. 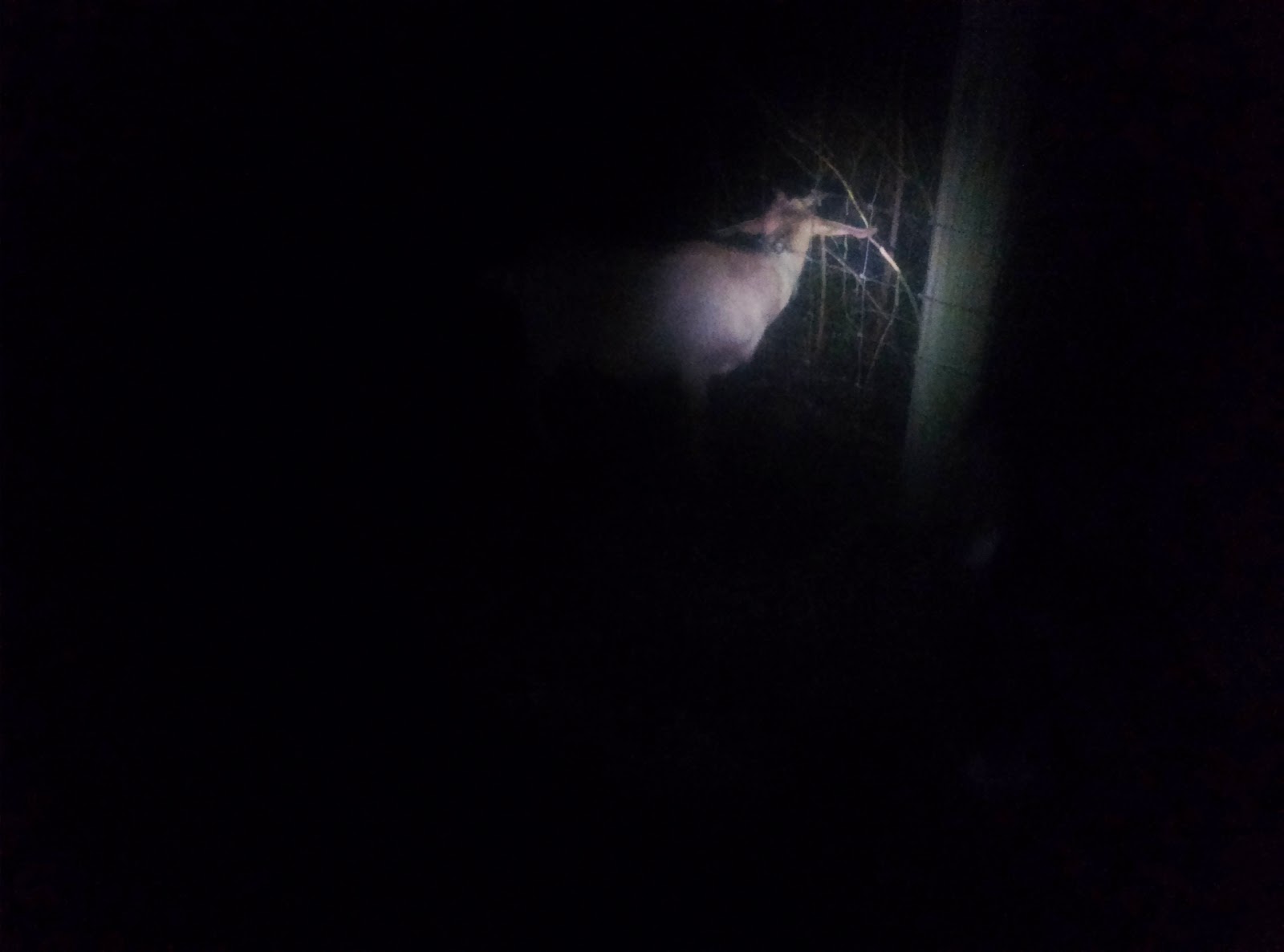 Sure enough. There she was with her fool head stuck in the fence...again. 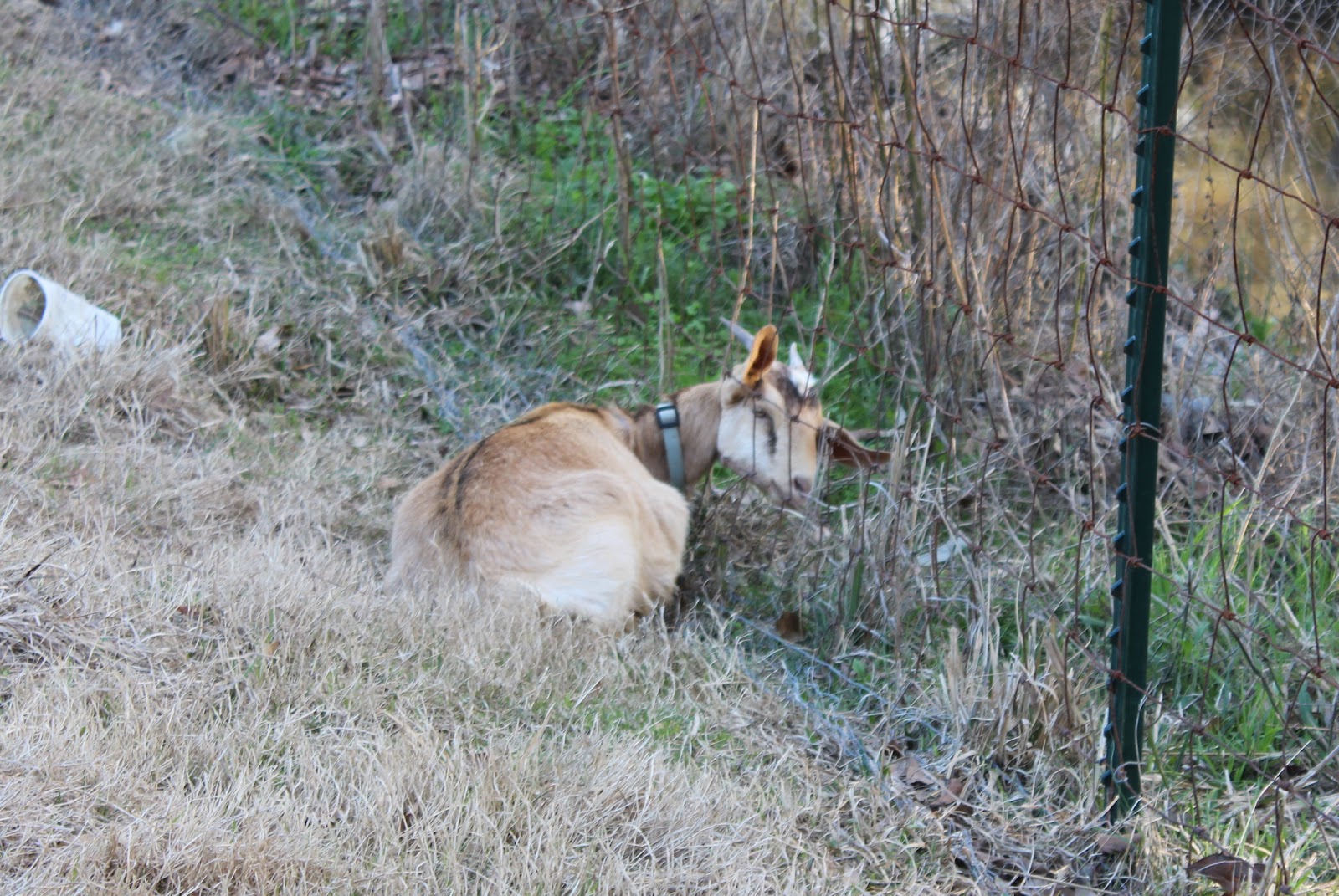 Getting her head stuck in fences was beginning to be a full time career for this little genius. On the day these pics were taken, Amelia managed to get her head stuck in the SAME fence four times! In fact, I decided to tack up a layer of chicken wire on top of the existing fencing to keep this from happening and Amelia stuck her head through the fence and got stuck AGAIN not 10 feet from me! 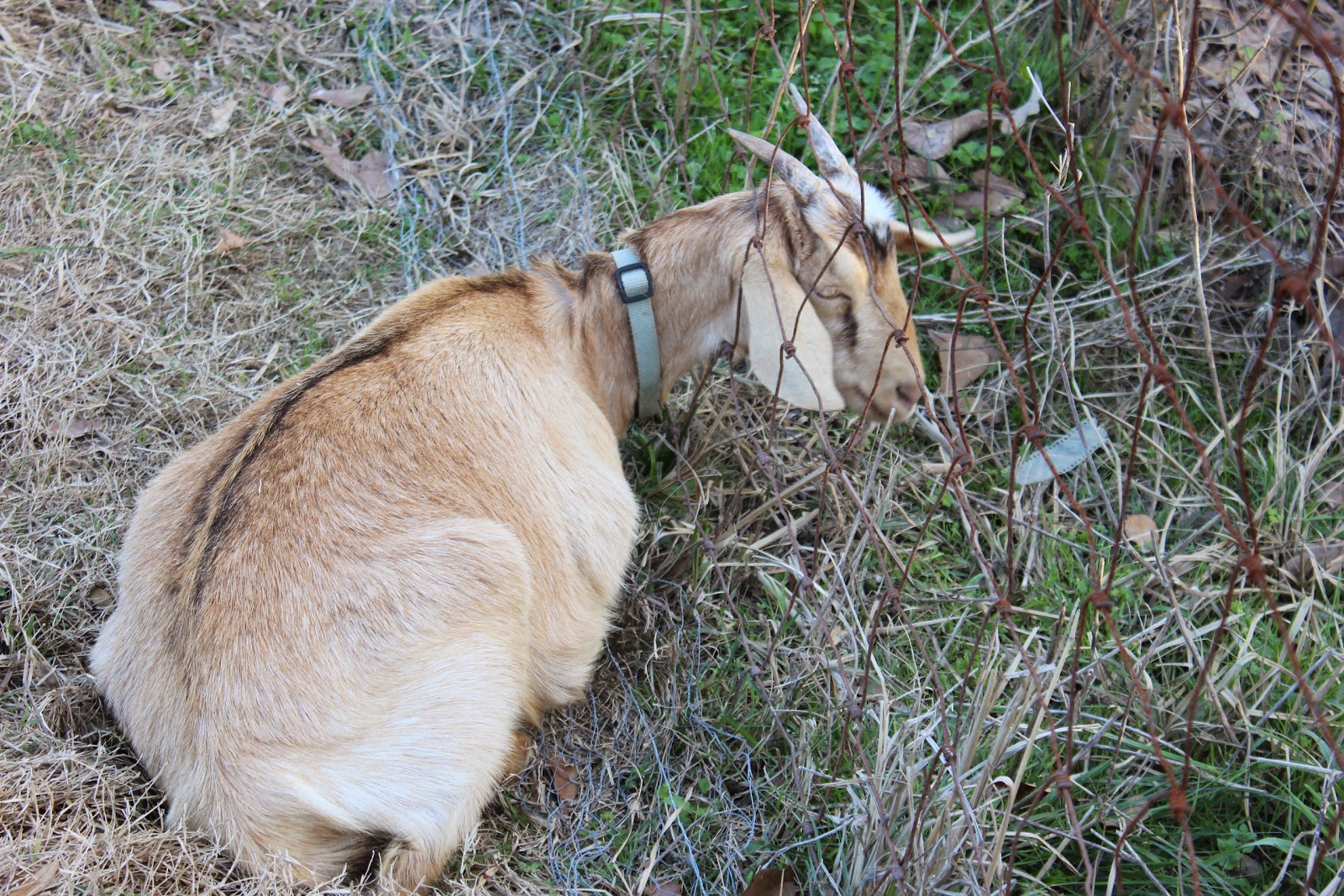 We used to think that Amelia's mother, Thea, wasn't too bright because she was disbudded incorrectly. When goats are very young, some people will burn off their horn buds using what is basically a soldering iron. If held on too long, it can cause the brain to heat up and be damaged, but it seems Thea came by her smarts the honest way, though, because her daughter shares that particular trait in spades. (Actually, one of the arguments FOR disbudding is to avoid having the goat get stuck in fences.)

After a while of this foolishness, we decided to take action. 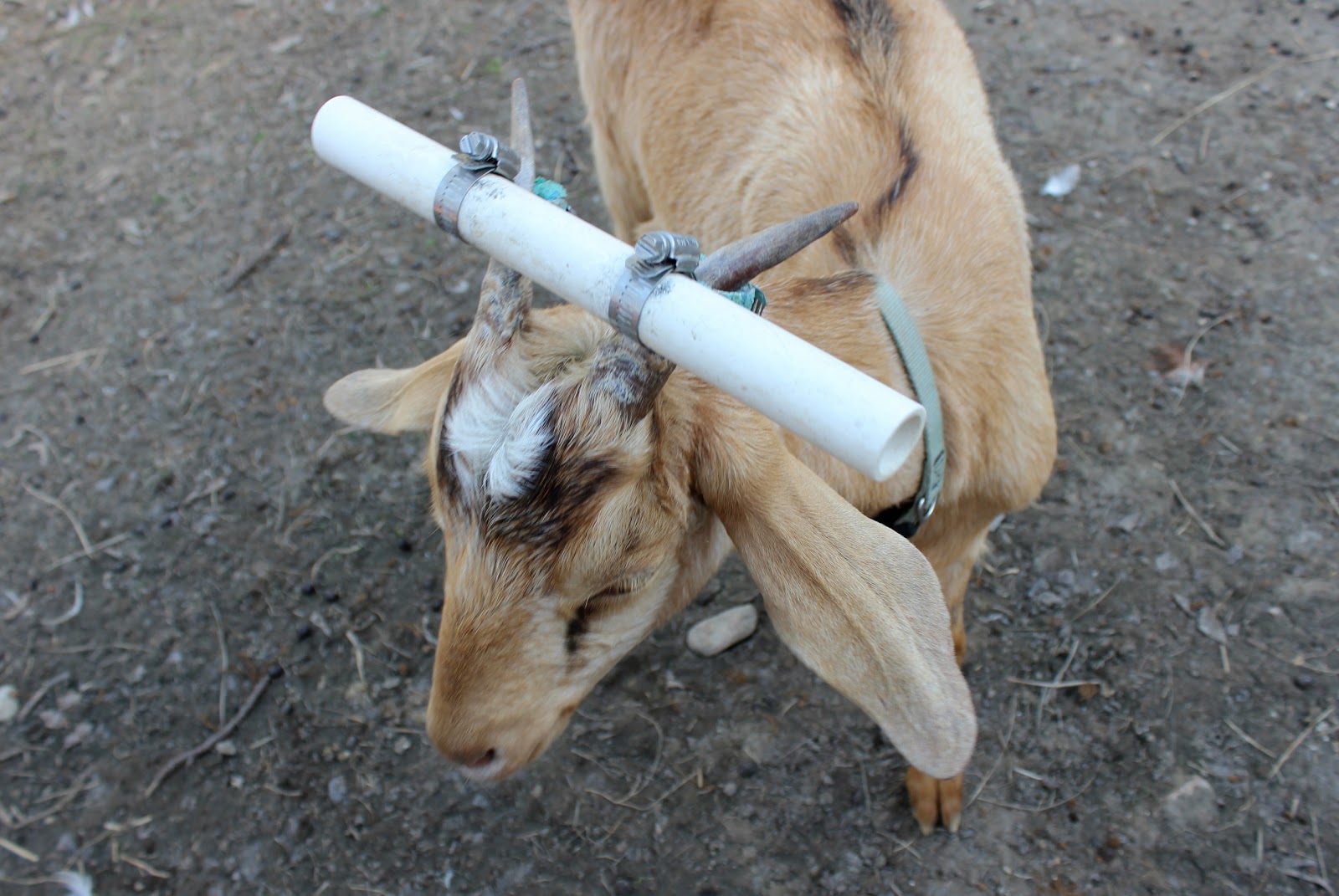 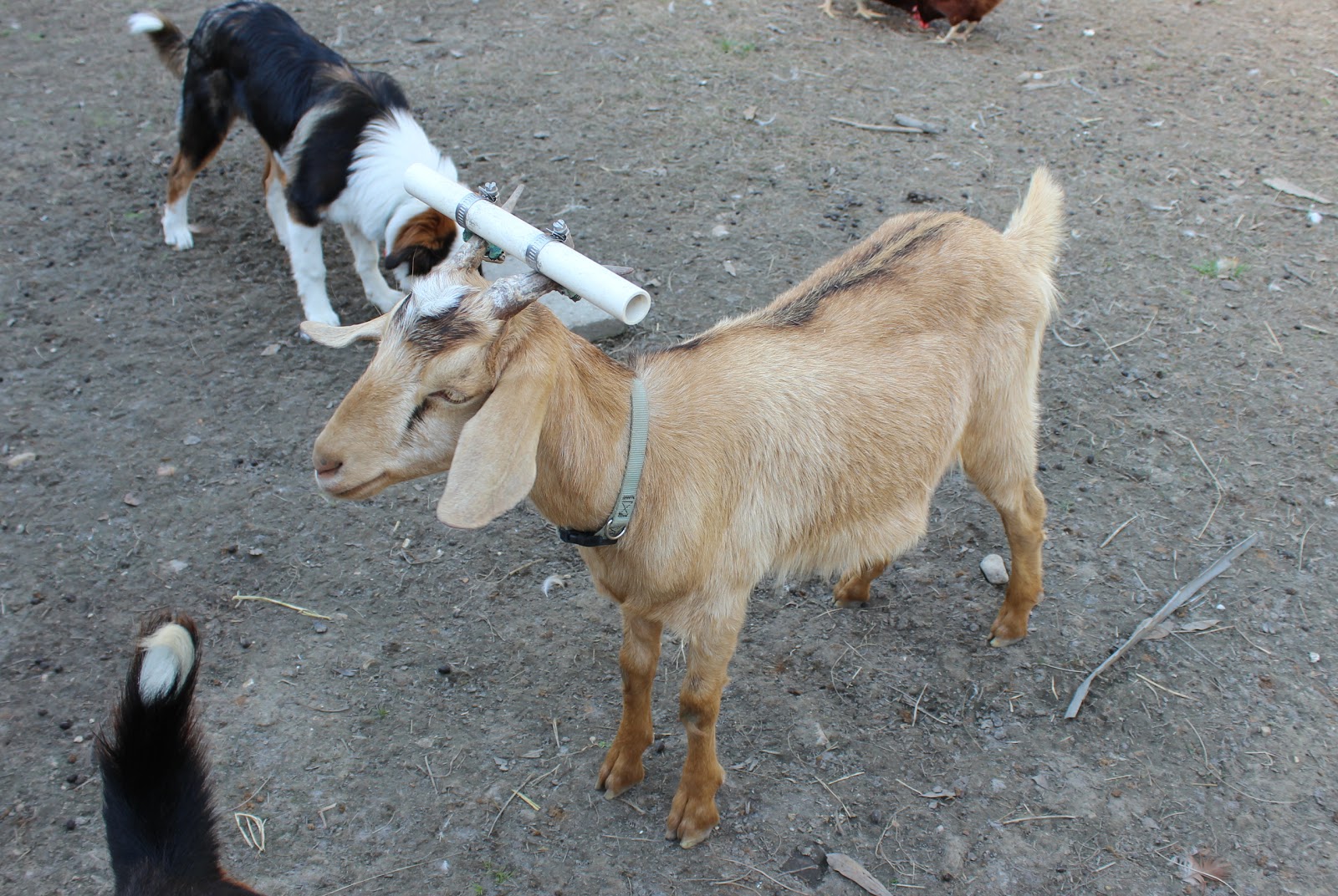 Here is Amelia in her dunce cap. It is simply a short length of PVC held on loosely with hose clamps. We also wrapped the clamps in vet wrap to keep them from rubbing her horns too much. 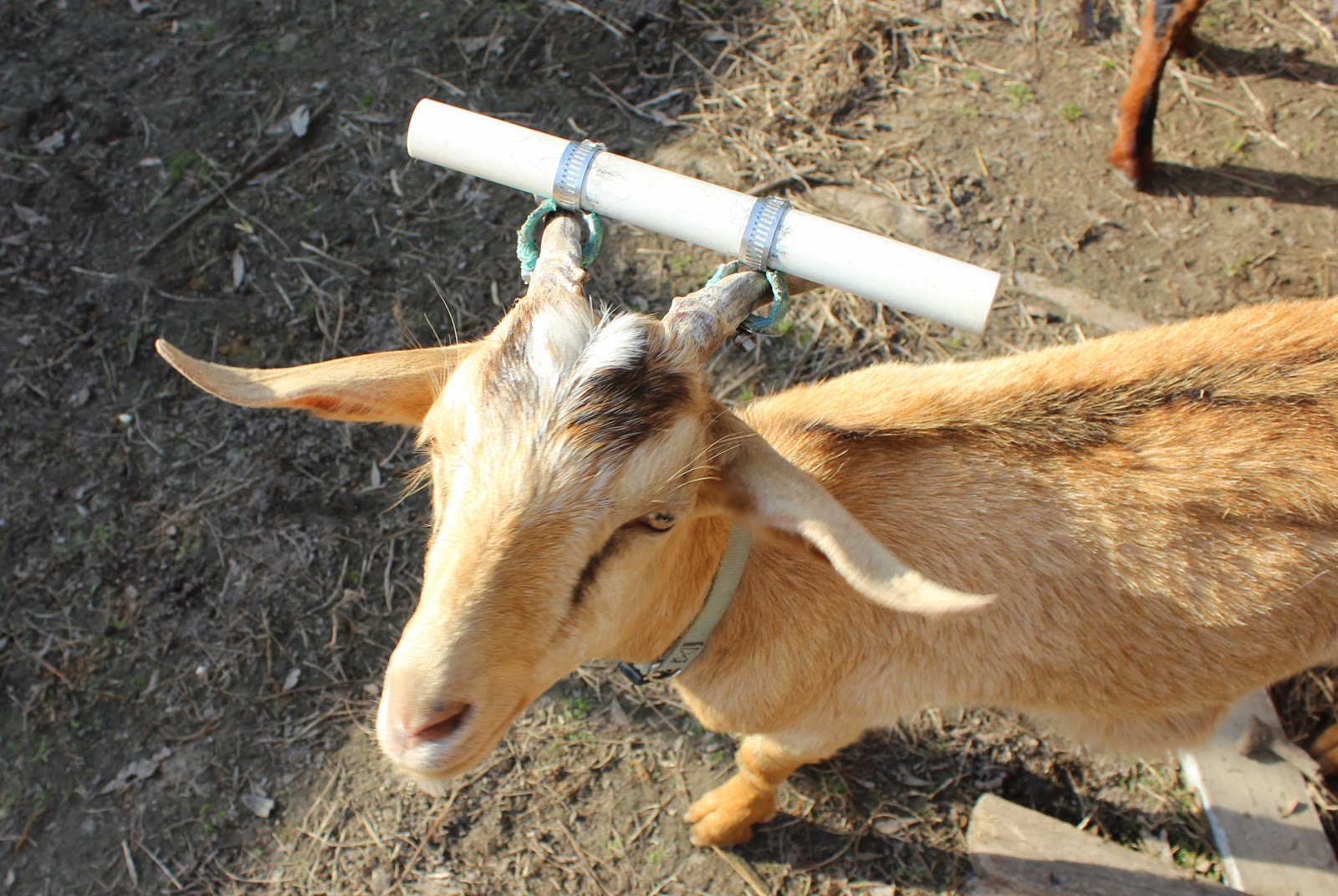 Aside from a lot pointing and snickering from the other goats, it doesn't seem to bother Amelia in the least and so far, she had not managed to get herself stuck in a fence since she starting wearing her special head gear. Hopefully, if we keep this on her for a few weeks, she will learn that her head no longer fits in those small opening in the fence and quit trying. Also, pretty soon her horns will grow out to a point where they won't fit either. 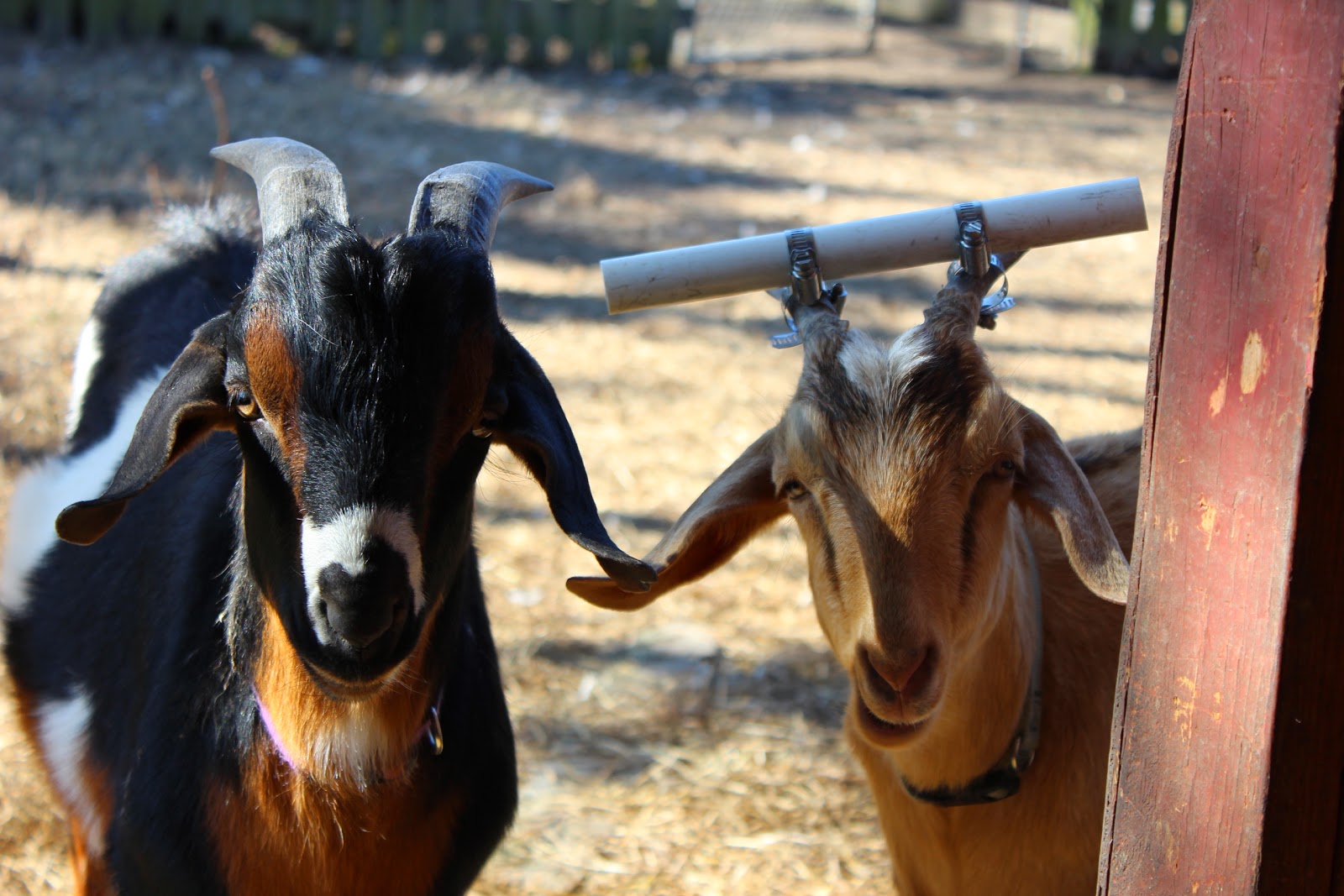 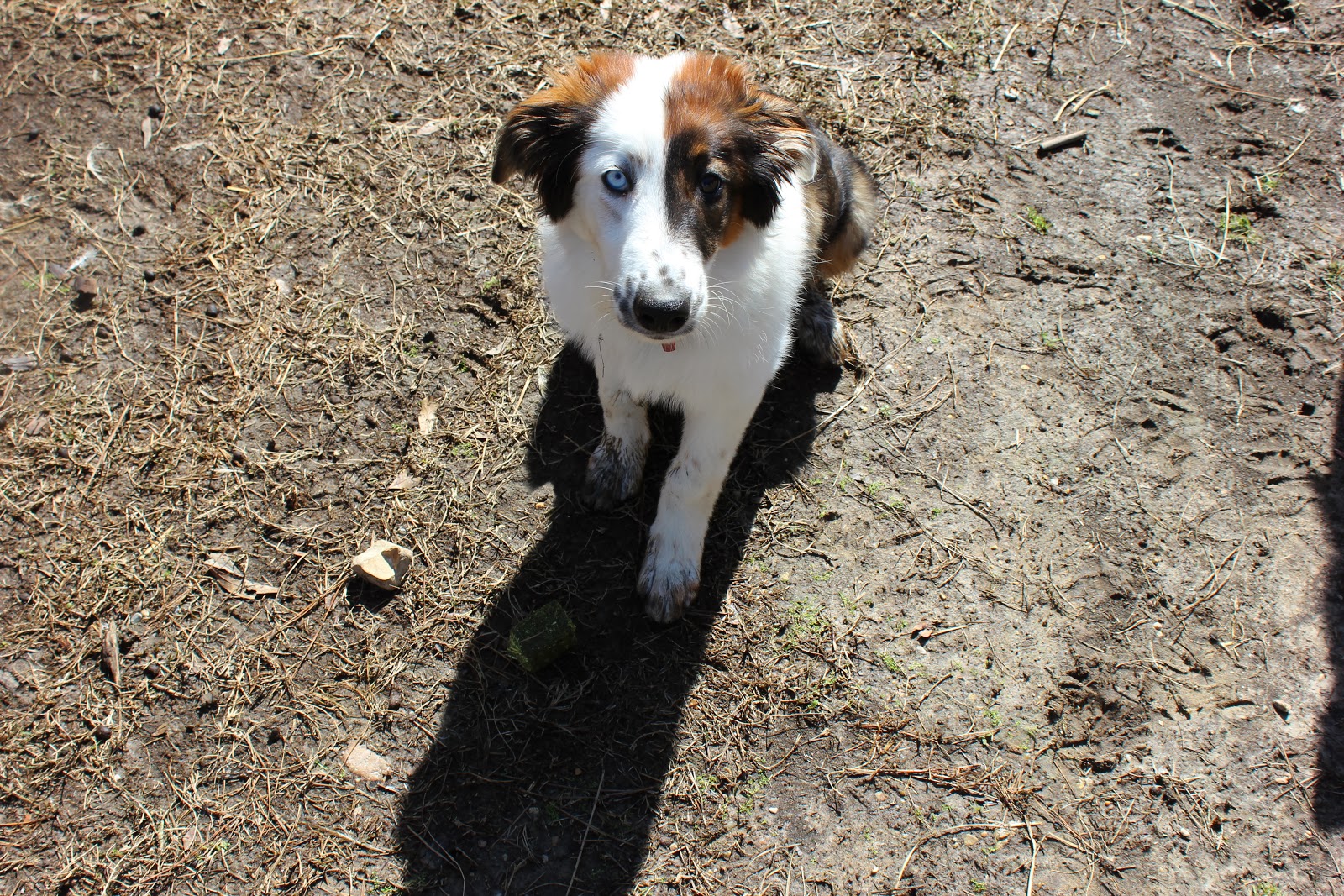 "Hey Rialey, why are we out of alfalfa cubes?" 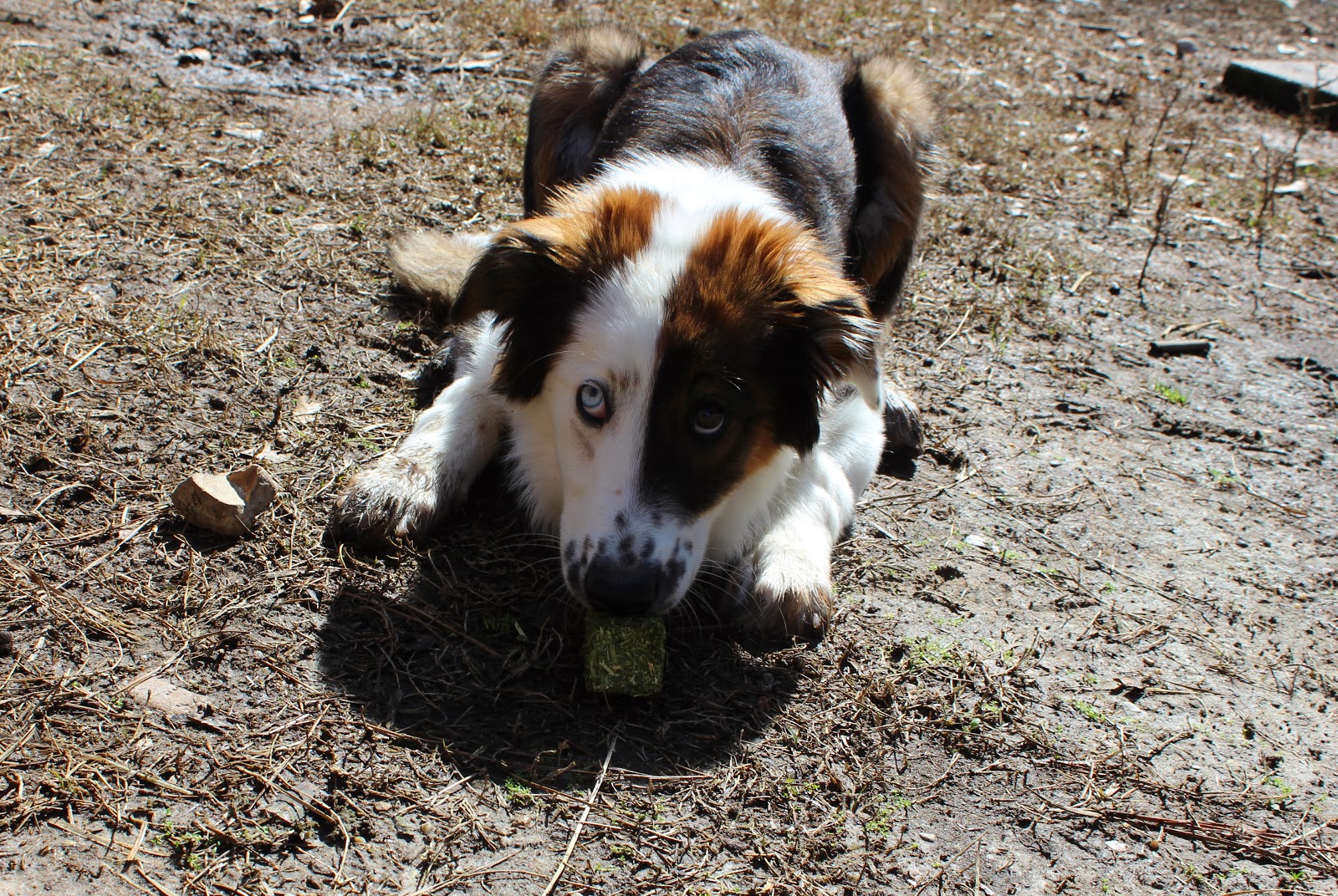 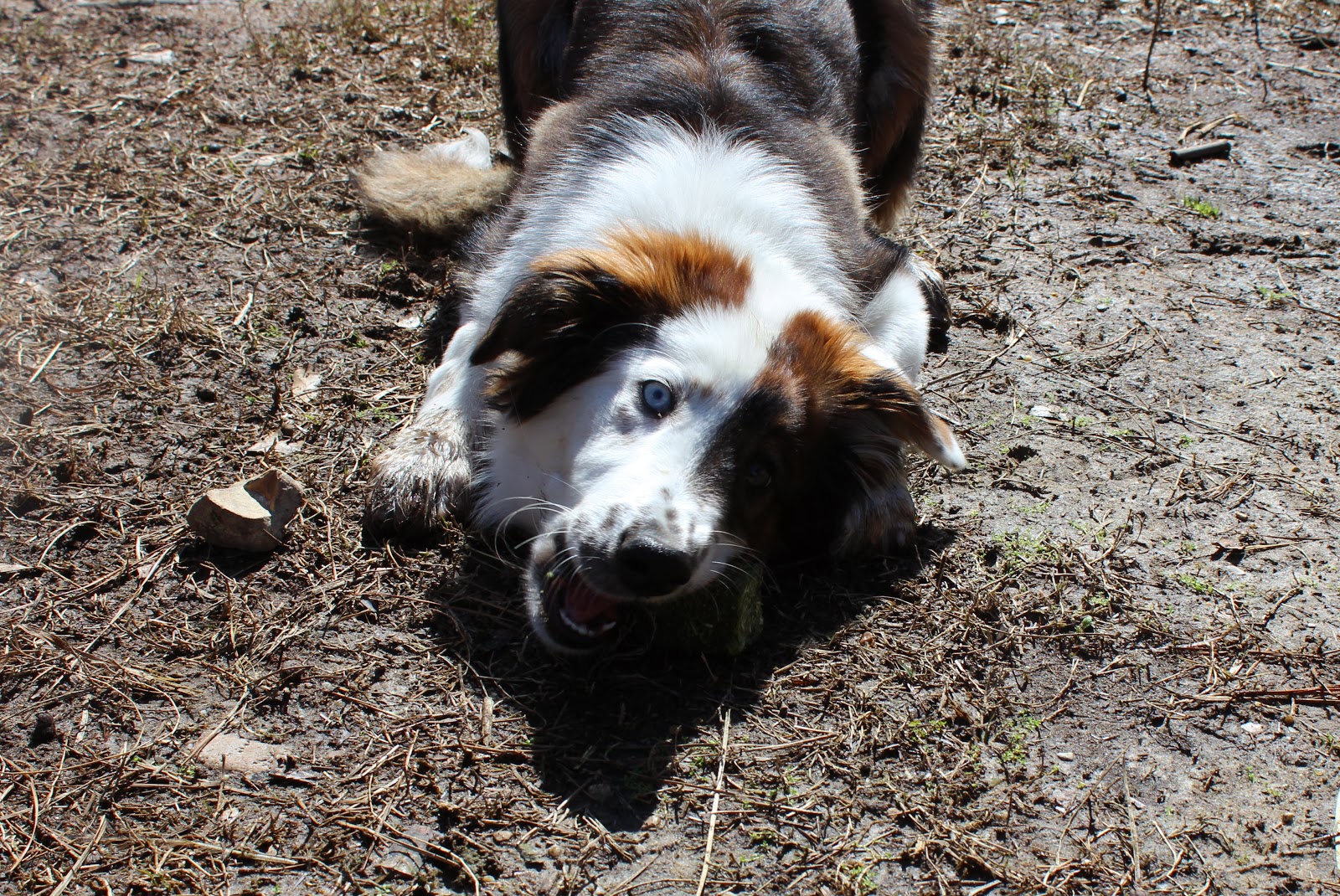 "But these square, green dog treats sure are tasty!"
Posted by Kaela at 9:20 AM 0 comments

Email ThisBlogThis!Share to TwitterShare to FacebookShare to Pinterest
Labels: rialey

Just thought I'd share some pictures of this pretty little girl.... 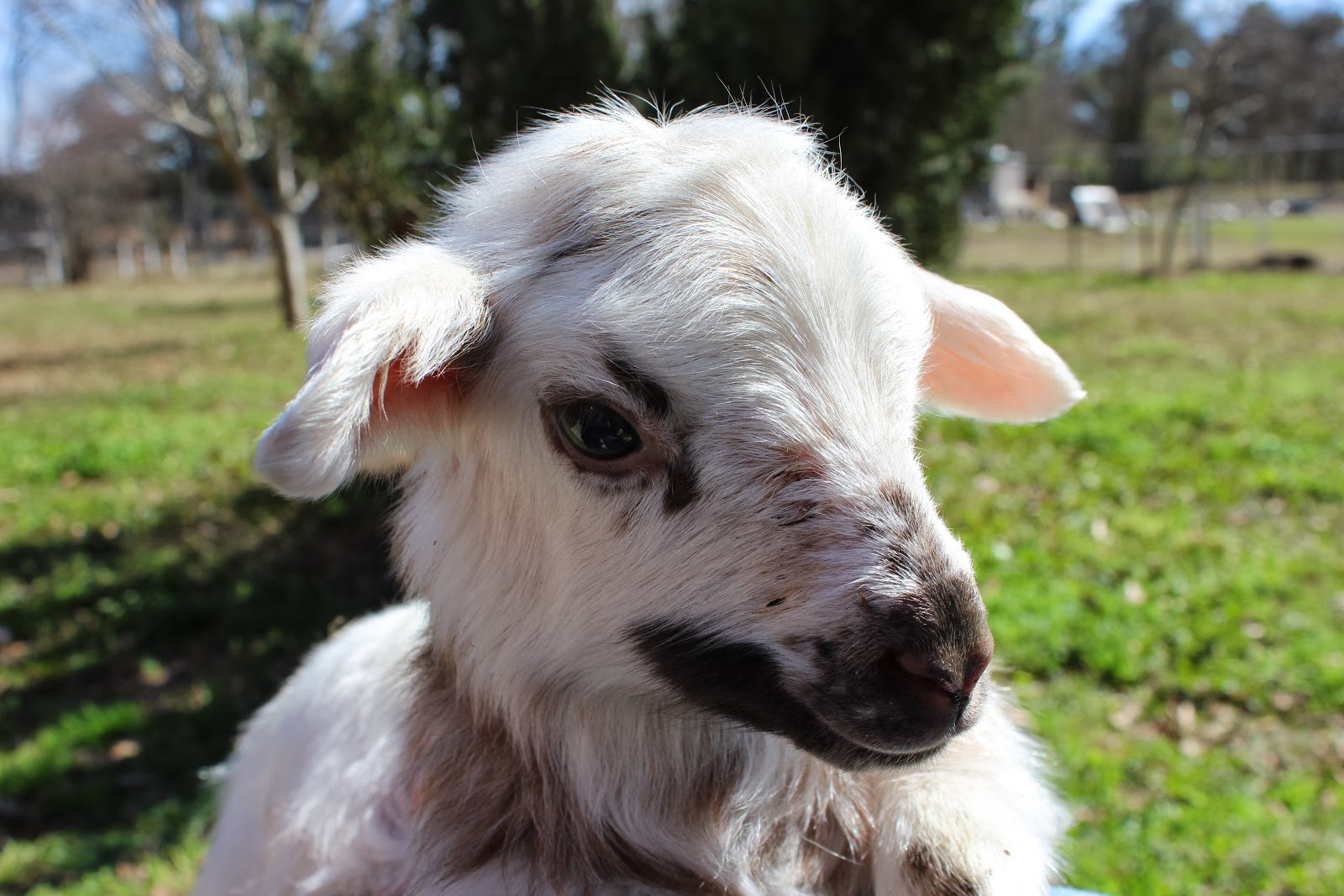 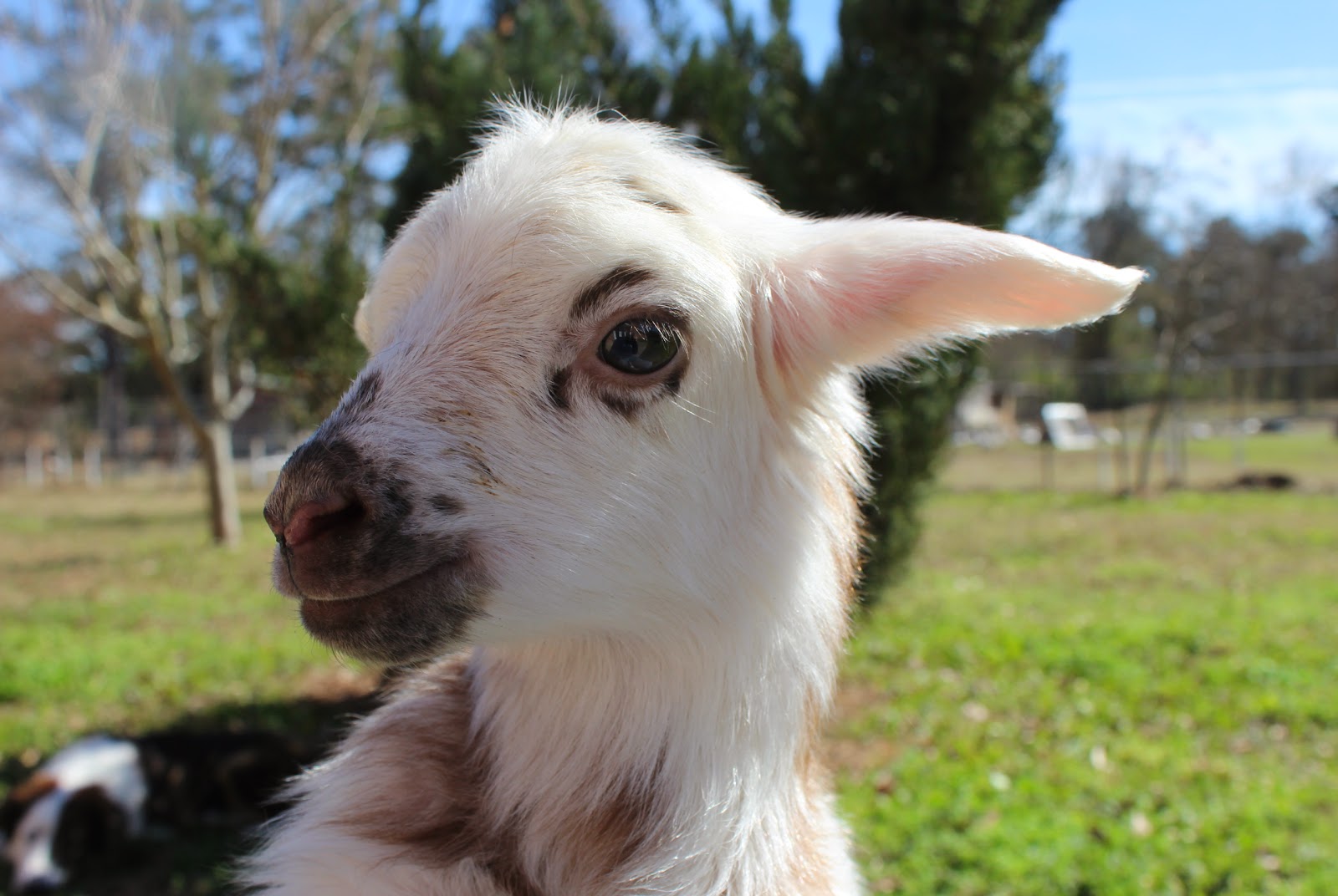 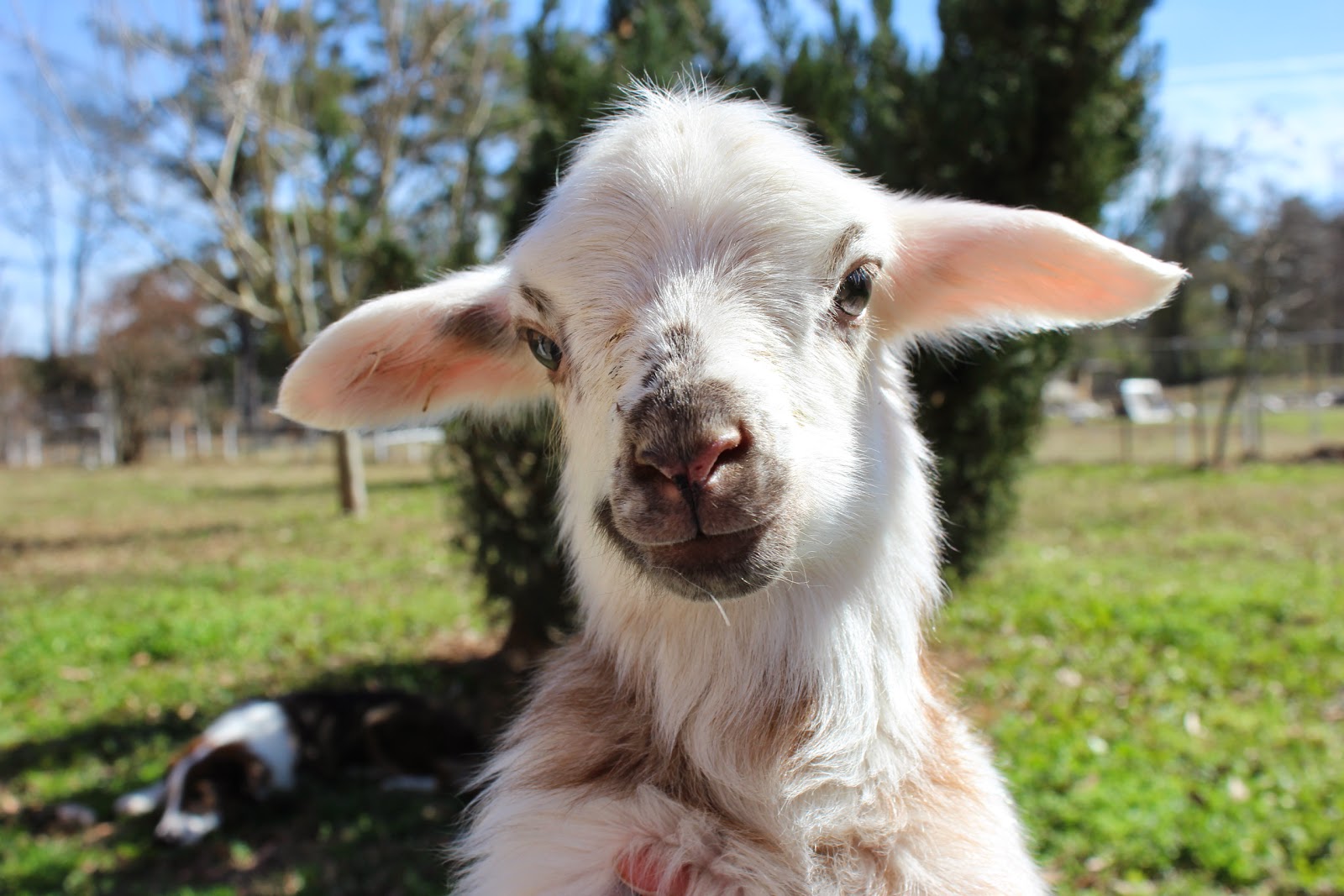 We had a really funny moment with this baby one morning a few weeks ago. I had dumped a scoop of feed in the goat yard for the sheep. Well, the whole flock went rushing in, including Basil's mother, Fancy. Poor little Basil got separated from her mother in the scrum and ended up outside the goat yard confused and calling out for her lost mother.

I stood back and waited to make sure mother and daughter got back together. Instead, Patch who is Fancy's mother and therefor Basil's grandmother came back out and stood by the distressed lamb. 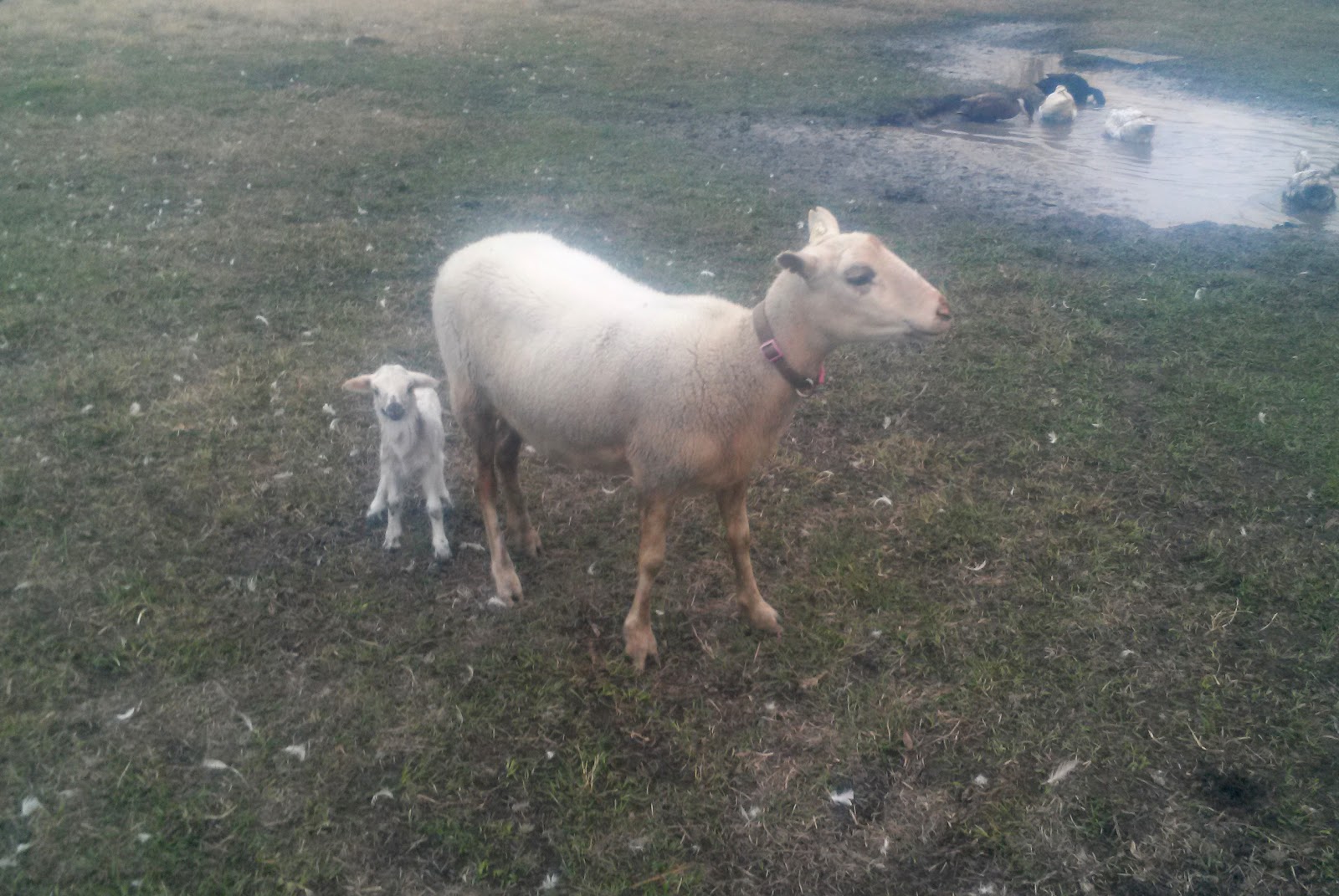 I swear you can see Grandma rolling her eyes here thinking, "Where is that daughter of mine? She needs to come get her kid!" Eventually, Fancy realized her daughter was missing and came out to claim Basil from Patch, but I have to imagine that Patch had a few choice words on proper parenting for her wayward daughter!
Posted by Kaela at 12:16 PM 2 comments 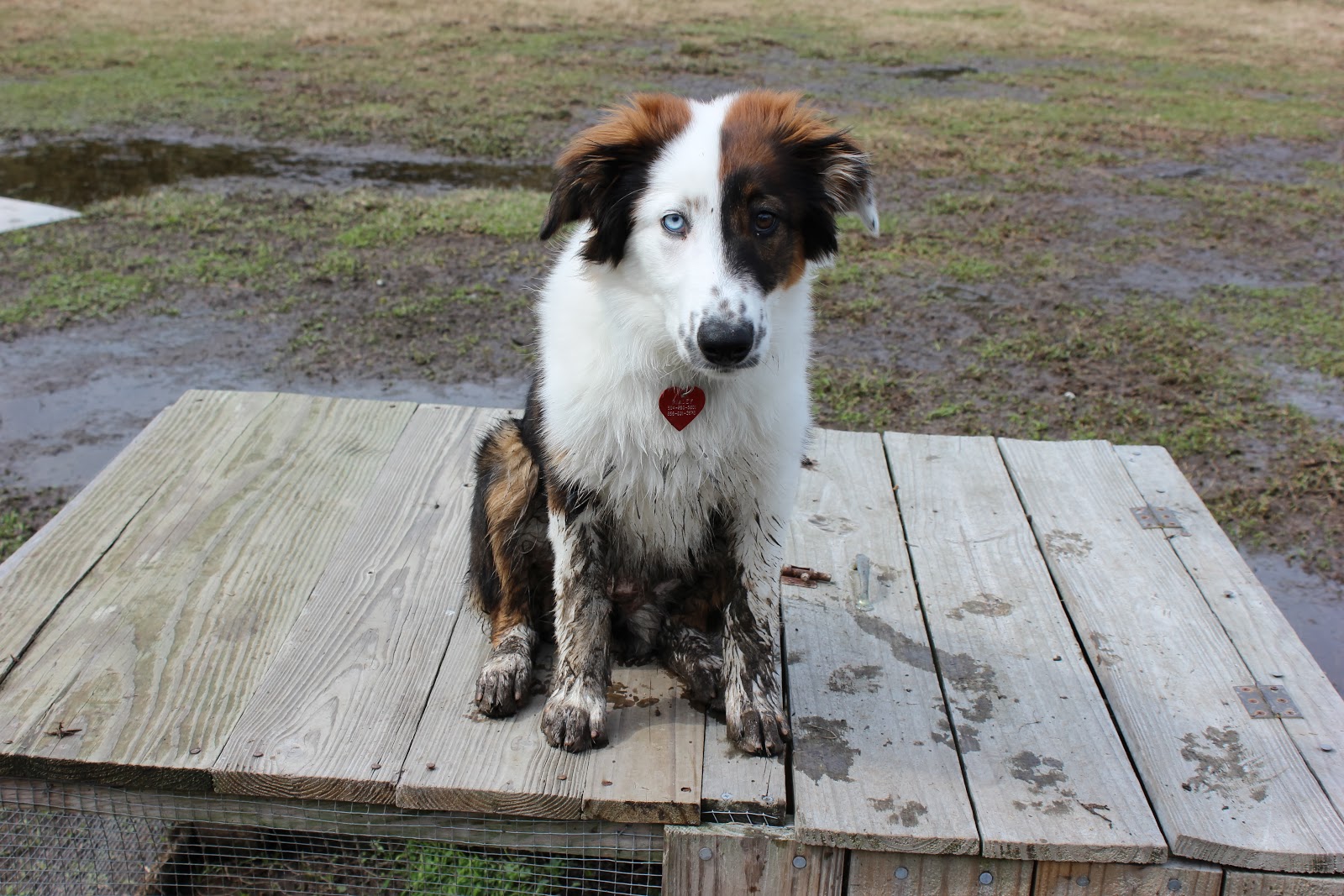 We finally have a little break from the rain so the fields and pens are just starting to dry up. These pics are from a week or two ago. Thank goodness Rialey is not phased much by mud and water. We certainly have a lot of it around here. 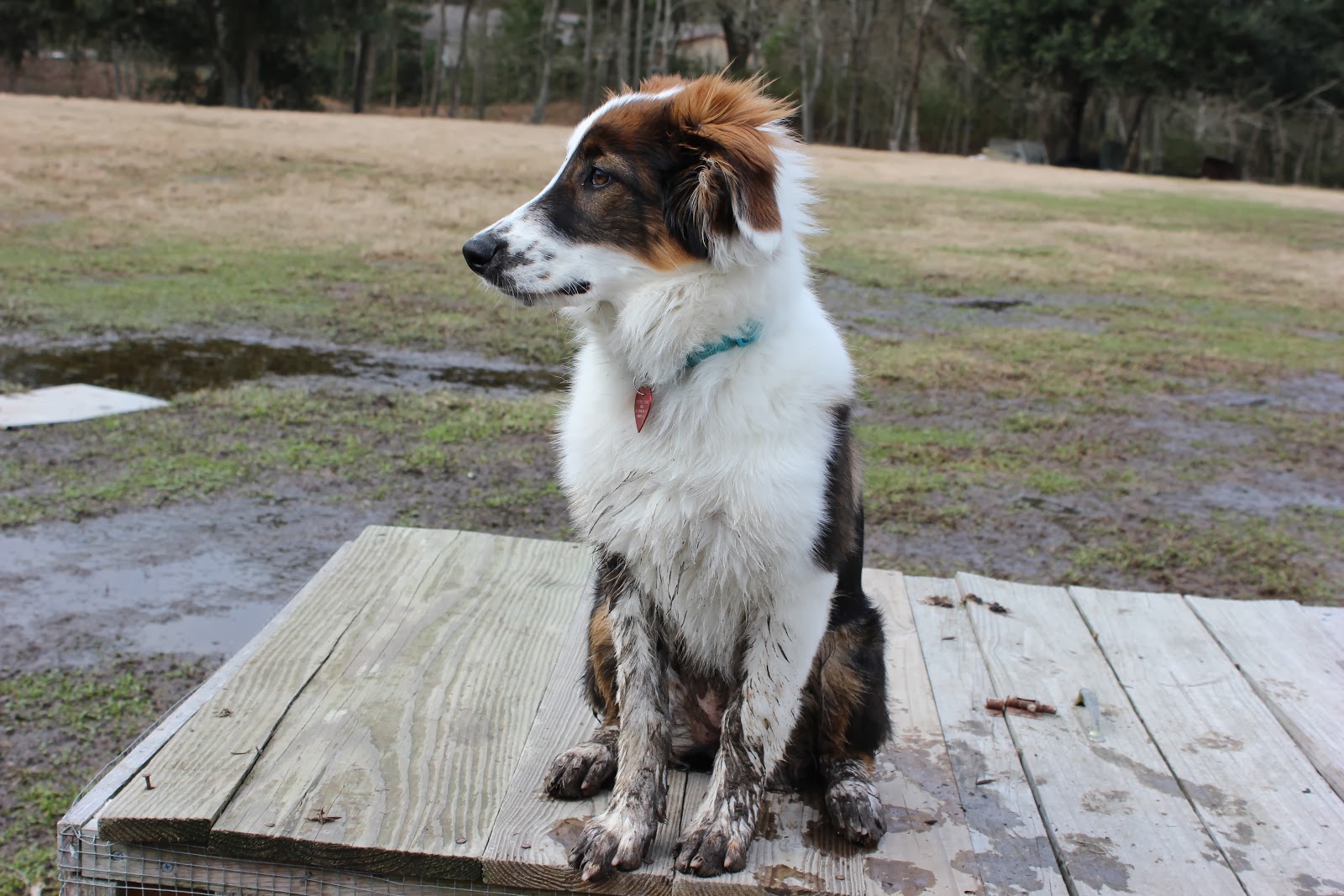 It's hard to look dignified when you are soaked up to your elbows. 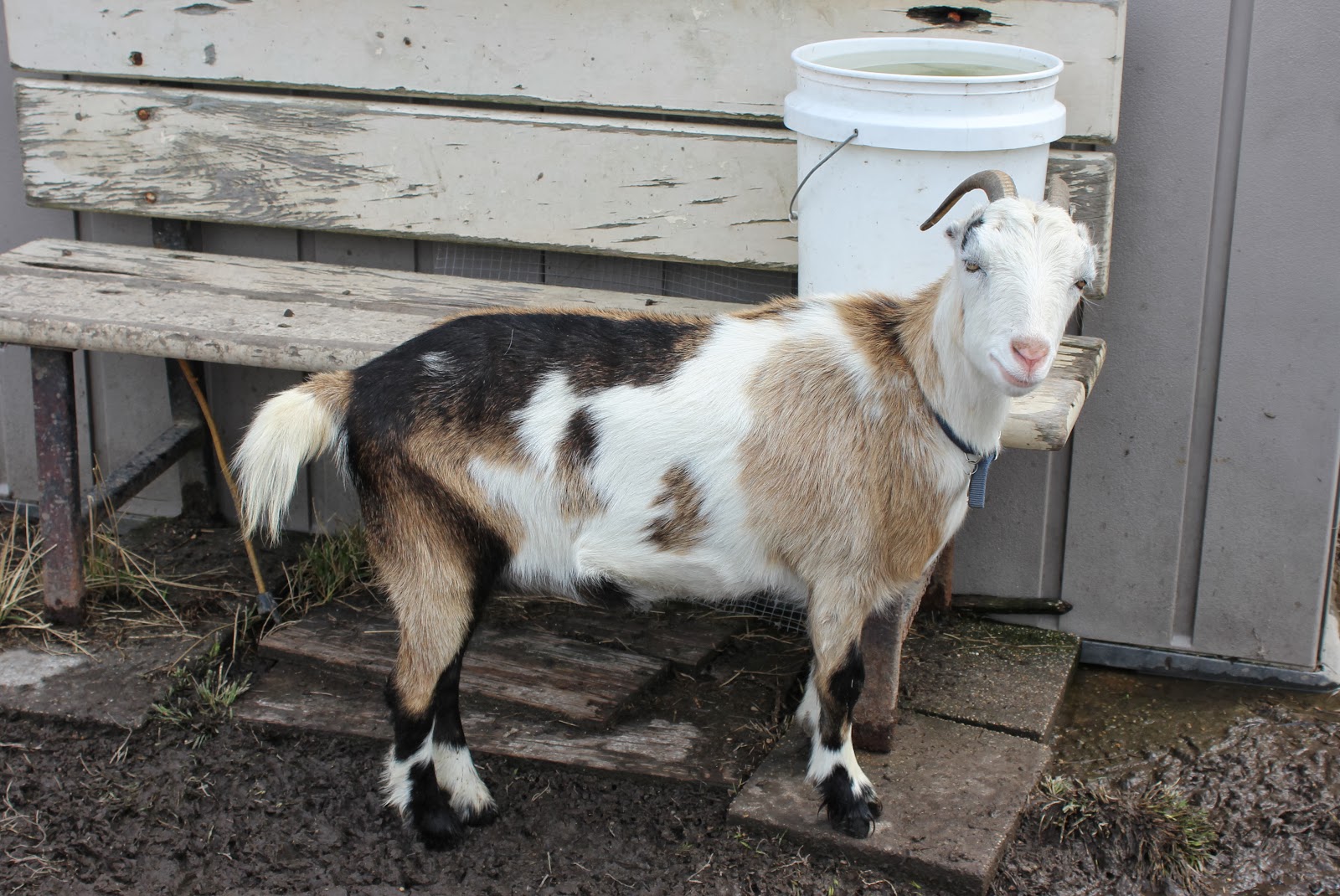 As usual, Gwen is less than amused.
Posted by Kaela at 4:43 PM 0 comments

I had every intention of draping the goats with beads yesterday and taking some fun Mardi Gras pics, but the weather was so gross both the goats and myself preferred to stay indoors. Sorry! Let me at least wish everyone a belated Happy Mardi Gras!

Even through this nasty, cold winter, we have been doing very well with egg sales. We have a wonderful group of customers who are happy to purchase every egg we can produce. With that and the fact that some of our girls out there are looking at their third year of laying in mind, we decided to invest in some new egg laying hens for the future. 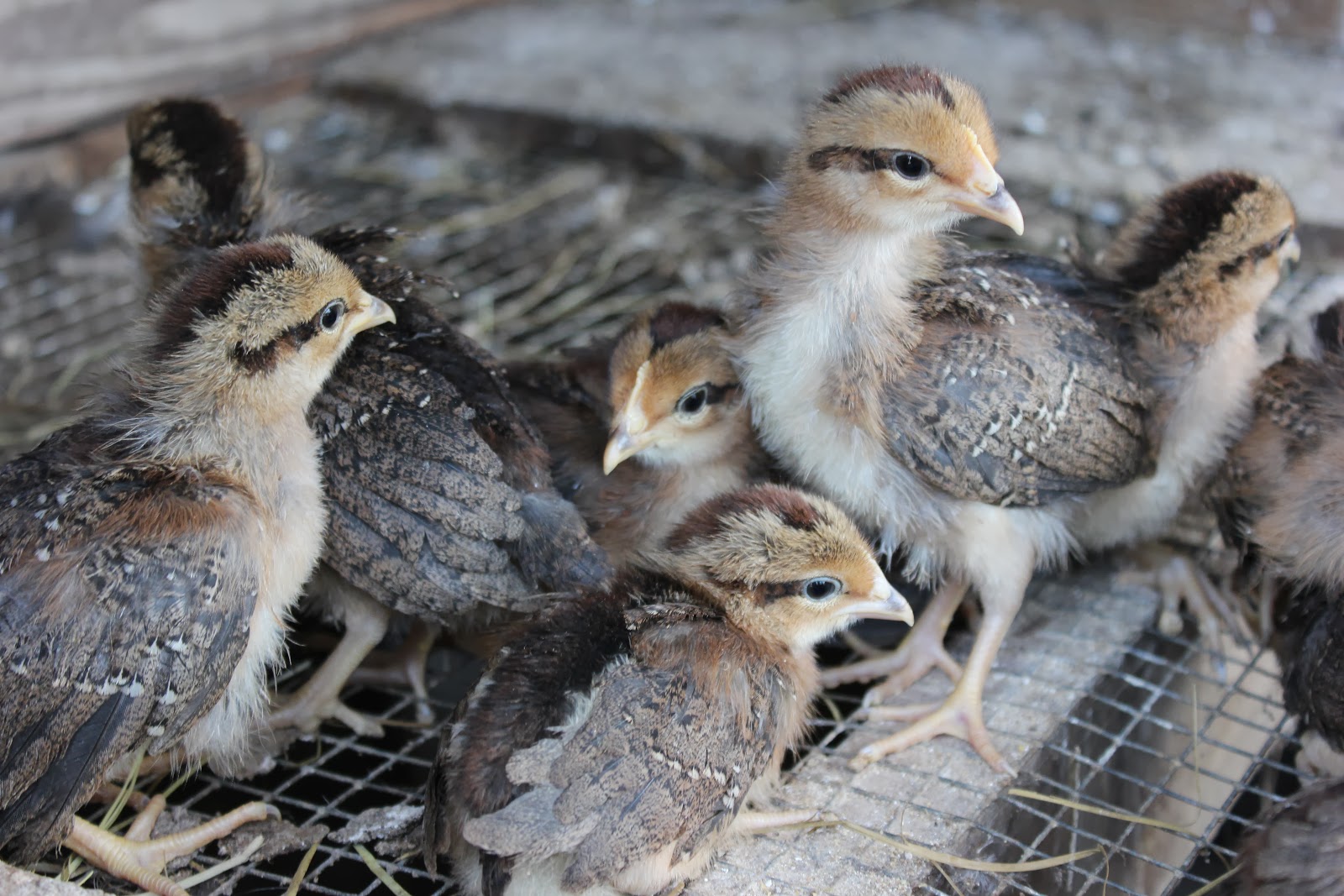 These pretty little gals are brown leghorns. They are supposed to be one of the best egg laying breeds out there with the bonus that they don't tend to interrupt their laying with trying to sit on a nest. They also lay large, white eggs which will add a little variety to our current brown layers.

We were lucky to find them at our local feed store and so far they are all healthy and growing like gangbusters. They seem a little more high strung and spooky than most of the chicks that we have raised in the past. Hopefully they will settle down as they age and in a few months we'll be able to add their contributions to our cartons!