Our goat milk situation was looking rather bleak. Our only two goats in milk right now are CAE positive, and this disease just destroys a goat's milking ability. Josie is down to one pathetically small milking a day, and Thea, despite being a Saanen, only gives us a little over a quart a day. The younger girls are not ready to be bred yet (not that we have a buck to breed them around anyway!).

Big Onion and I had just started talking about looking for a new adult goat to add to the herd when an ad popped up in our of our facebook groups for a LaMacha doe for sale who was IN MILK. She was a reasonable price and just a little over an hour away from us. The owners said she was just a little too big and headstrong for them to handle.

We packed up my Element with the usual livestock moving gear: a tarp covered with hay and shavings and an x-pen set up to keep the animals from trying to climb into our laps or knock out the back window and headed out to meet this big doe. 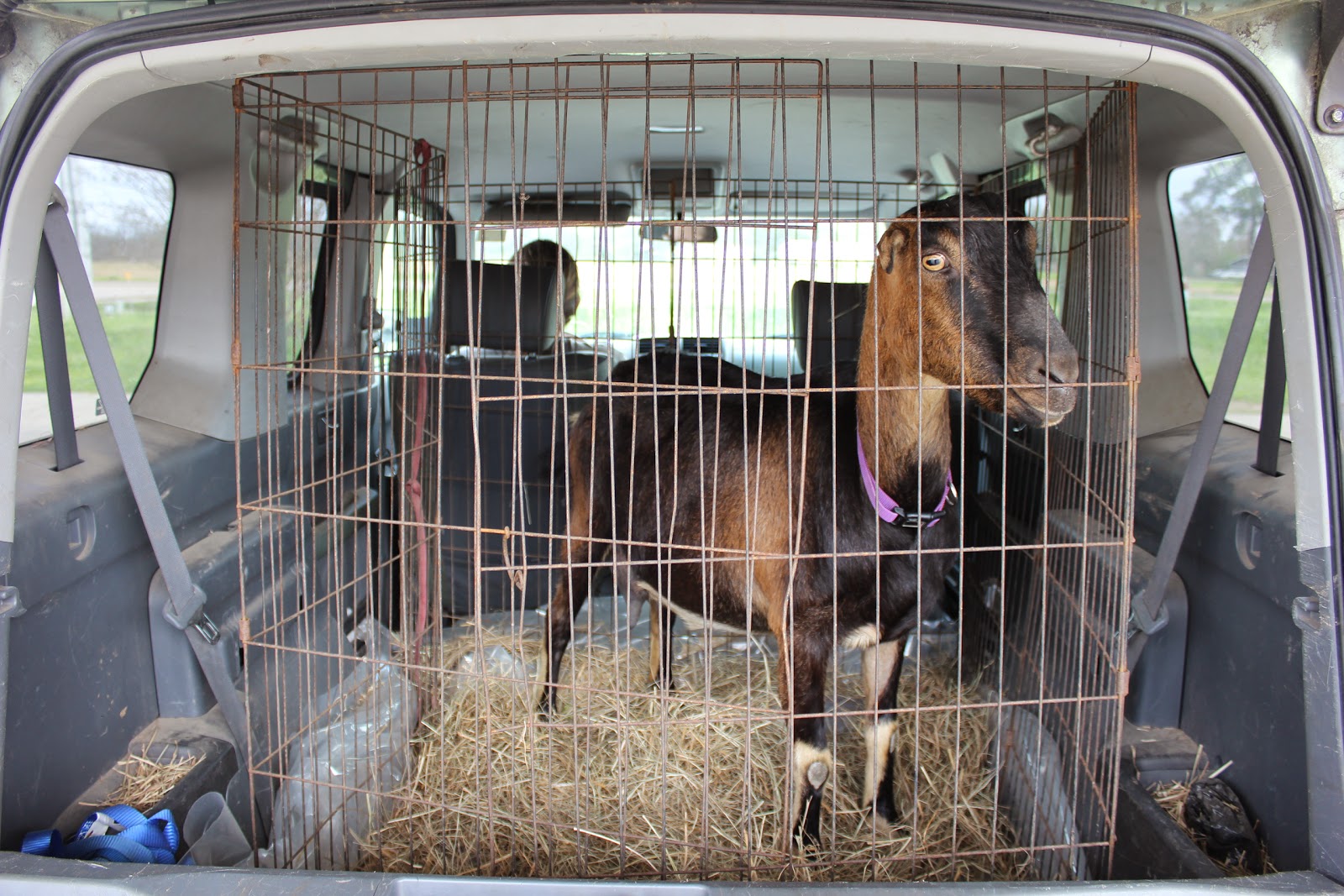 Her owners had a small, family farm with sheep, goats, cows, and kids. Many of their goats had kidded recently, and it was time to thin the herd a bit. They had a bunch of adorable little nubian-eared kids running around! I swear I didn't once try to sneak one under my shirt and into the car...really!

Helen, the LaMancha doe we had come to meet, had just had quadruplets a month before. Two had already been sold and the other two were being bottle fed. After a great visit and some minor goat wrangling, we loaded the big girl into the car and headed home. 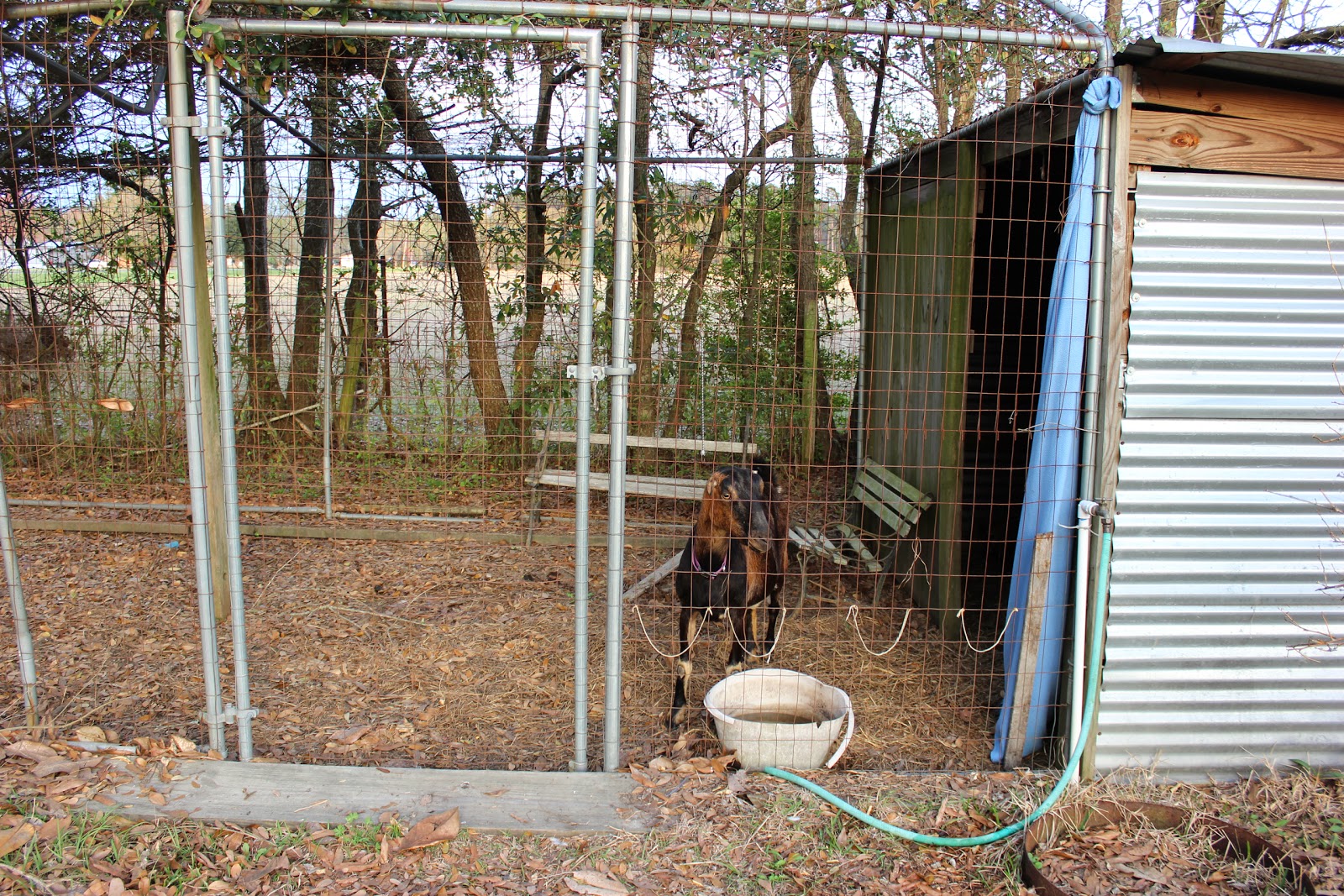 We have learned the hard way that quarantining any new animal that comes to the farm is very important so Helen spend her first week or so here living in the backyard pen away from the other goats. Her previous owners had already wormed her the day we picked her up, otherwise we would have done that as well to kill any worms she carried and keep them from spreading to our herd. 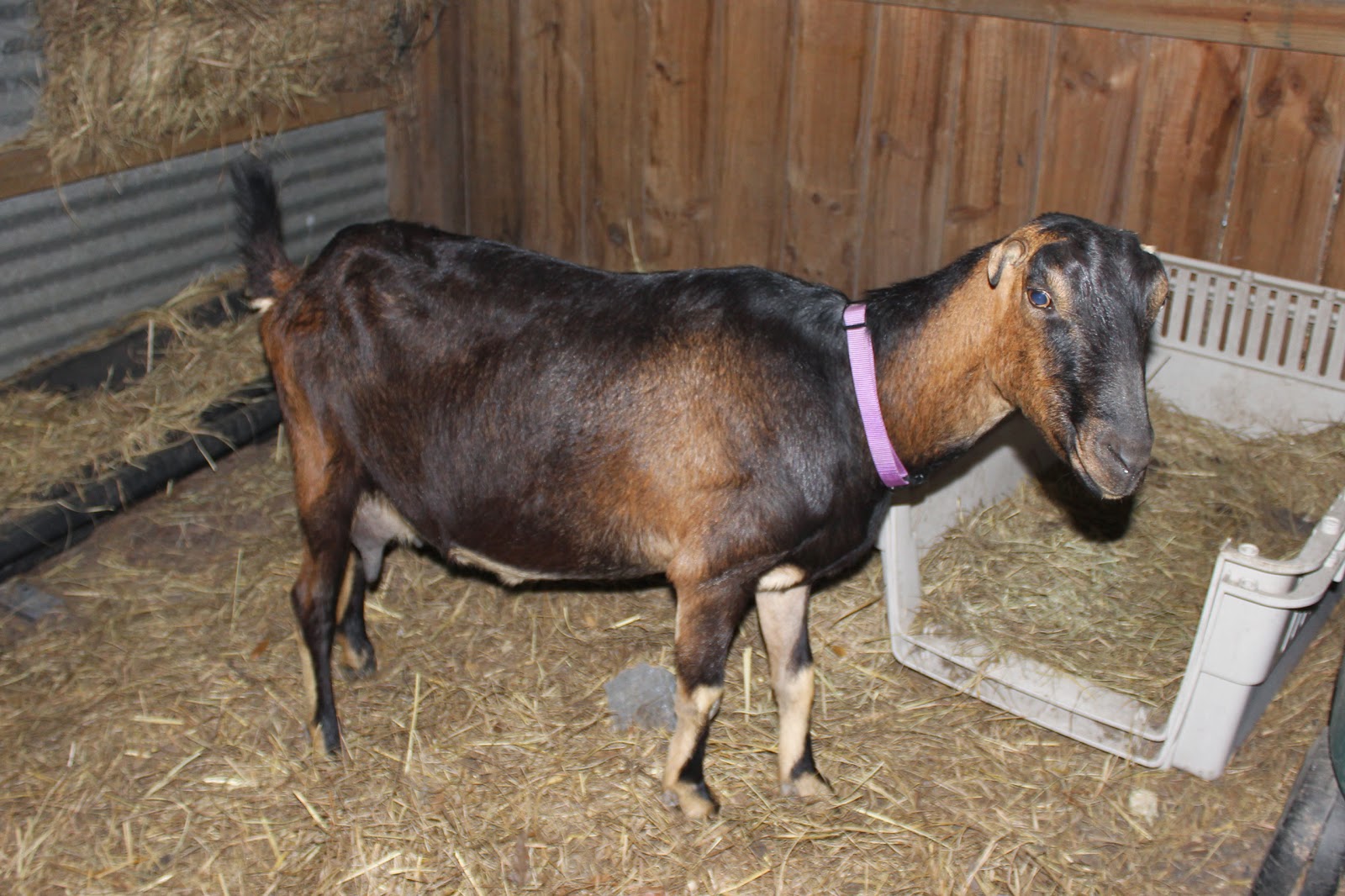 The only problem with the backyard pen is it has no milk stand. Helen surprised us by jumping right up onto an old cart we had in her pen and being a perfect angle for milking from the get-go. Boy does she make more milk than our current girls! She is also very sweet and people oriented. She loves being around us and getting lots of scratches. 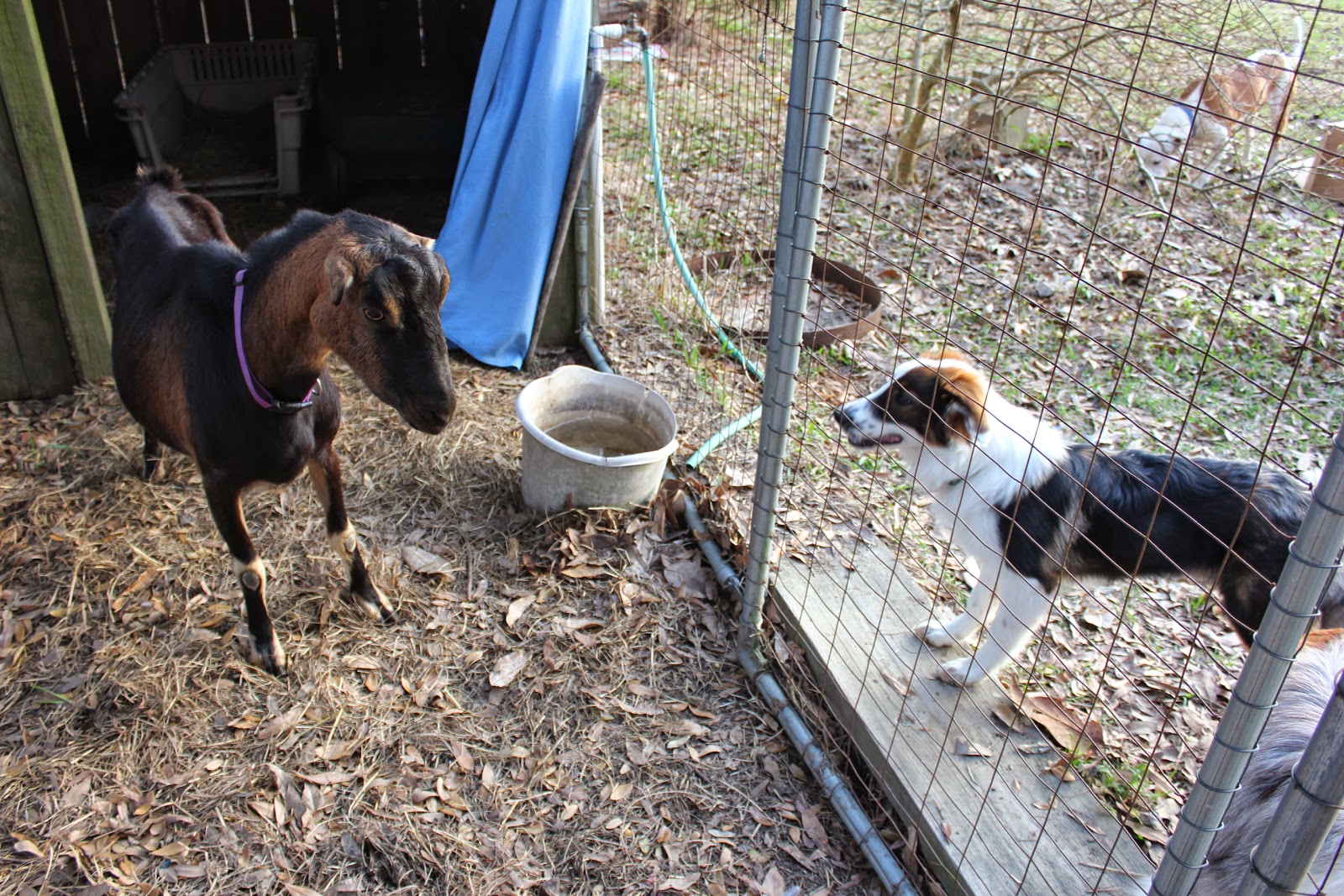 Although she was great for milking, she is definitely one headstrong goat. She does not lead by the collar well and if she decides there is some place she wants to be, she just goes no matter who is in her way. She is also very wary of the dogs. I thought she was just afraid of them until she gave poor Rialey a serious headbutting! Don't worry, the puppy is fine and even gave Helen a good nip on the shoulder (her first grip!) in retaliation not long after! 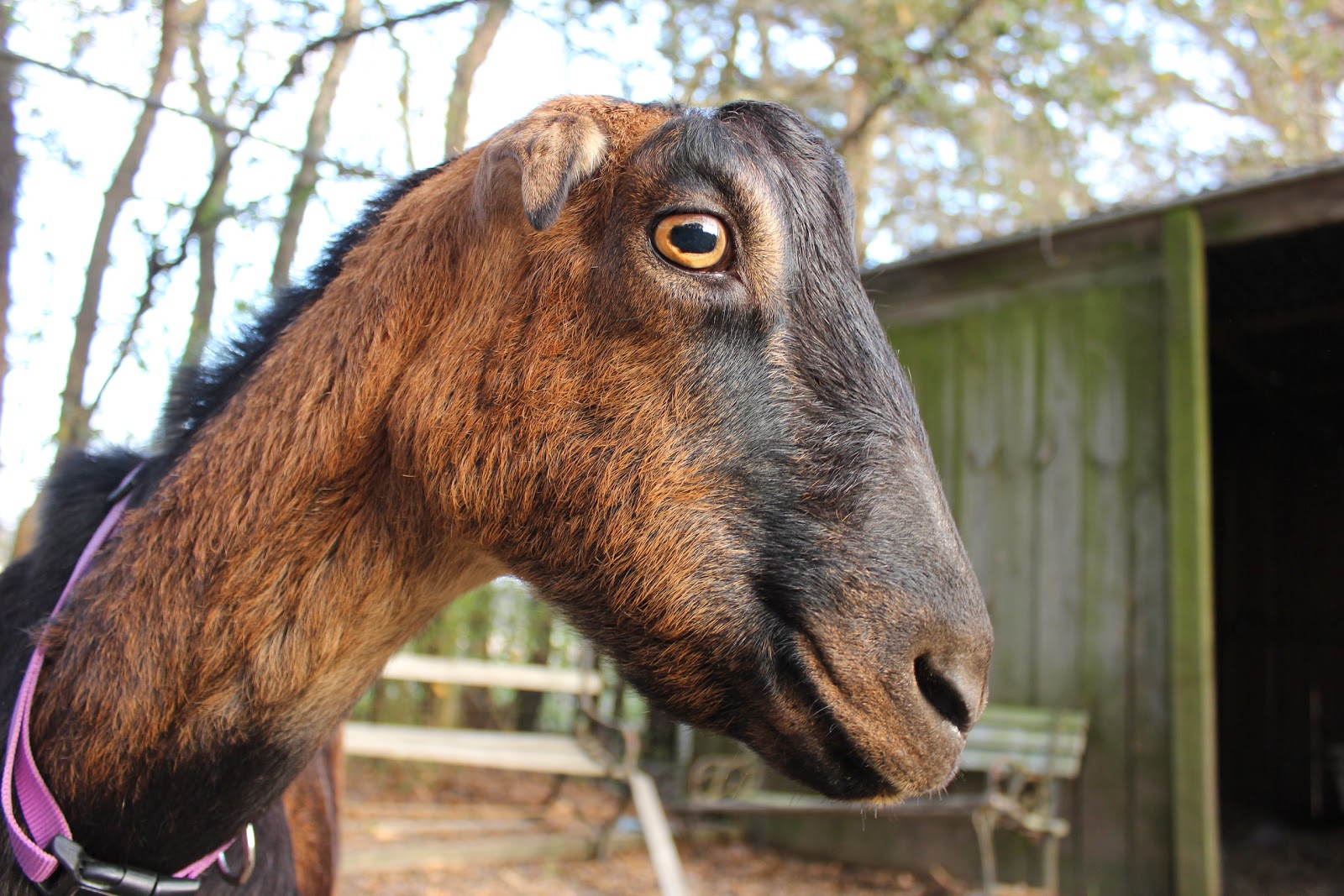 Helen is a pure bred LaMancha with those silly still little 'mancha ears and no horns. I think this makes her look like she has a tiny alien head. Right now we are trying to decide whether to change her name. Helen seems like much too polite and demure a name for such a big, tough doe.

I'm leaning towards Nancy or Eleanor. What do you guys think?
Posted by Kaela at 6:45 PM