All along I've said that Elliot is a very middle of the road baby. He's not the kind of easy baby that sleeps through the night and endlessly amuses himself during the day. On the flip side, he's also not the kind of baby who required endless rocking and walking the floors.

With him, it almost always boils down to just two things, gas and naps. As he's gotten older and I've learned what in my diet causes him issues, the gas has become less and less of a problem. I mean he still toots like a grown man on taco night, but the gas doesn't cause the same kind of pain and suffering for all of us. 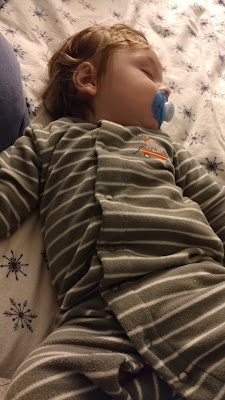 This just leaves naps. From the beginning, Elliot was not a great sleeper. He's not terribly difficult to get to sleep. If the timing is right, few minutes of walking and bouncing and singing boring songs usually does the trick. The problem is that he doesn't stay asleep. If left to his own devices, during the day he will nap for about half an hour at a time. My mother has solved this problems by spending many, many hours holding and rocking and soothing him into sleeping for 2-3 hour stretches. This has the advantage of getting him the hours of sleep he should have, that he needs but the disadvantage that little boy has never learned to sleep on his own. Plus his Mawmaw won't be around forever. Pair this with the fact that he was sleeping snuggled in the bed with me at night, and we have a baby who just cannot sleep on his own. 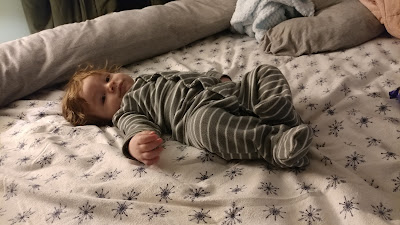 We've started working on it. During the day, we are trying to put him down for naps and at night he is sleeping at least part of the night in a pack and play next to the bed. Night time is working pretty well (I'm slowing recovering from baby snuggle withdrawal), but so far he cannot nap for more than about 20-30 minutes without waking and crying. The pediatrician says this is a very common time for sleep regression anyway. He says no matter what we do, things should get better in the next couple months. For the sake of our cranky kid and my unfolded laundry, I sure hope so!
Posted by Kaela at 11:03 PM