This year has been really bad for us with predators. It seems every time we dispatch one, another shows up. Every time we secure one pen, something finds a way into another. Something is picking off our poultry, and nothing we do seems to stop it. We are not in a place right now to get a livestock guardian animal, but the possibility has been discussed at length. Right now, we believe we are battling a fox who likes to tunnel into the poultry pens and make off with our birds in the night. It even made off with our beloved little Cynthia.

One morning a few weeks ago, Rialey was keying in on one chicken, a little silver laced wyandotte hen. She seemed to have a number of loose feathers on her chest, but she was running around with the rest of the birds and eating normally so I didn't think much of it. That evening again Rialey pointed out this hen and tried to make it clear to me that she had a problem that needed my attention.

When I finally got my hands on the girl after she gave me quite the run for my money, I took a good look at her chest. It was bad. Way worse than I expected considering how normal she was acting. Something had ripped away the skin on her neck and chest and part of her crop was torn open. The crop (sometimes called the croop or craw) is a small, muscular sac that connects the esophagus to the rest of the bird's digestive track. It is where chickens store food that is waiting to be digested. I could actually see part of the corn that this hen had for breakfast through the hole in her chest.

Not having it in me to put down such an active, seemingly normal bird, I set her up in a pen inside the poultry house with her own food and water. I was hoping that perhaps she could heal enough to close up the hole and be ok. The next morning we noticed that she had drunk her entire waterer and when we refilled it, she started chugging down the water again. After watching her for a few minutes we realized that while feed seemed to be staying in, all the water this poor hen tried to drink would just dribble out the hole in her neck. Despite this, our girl was still full of life. I mixed up some vitamin water and syringed it directly into her crop then Big Onion held her upright for a while so that the liquid would be absorbed.

That night since the hen was still seemed bright and active we decided it was time to take action. Again we didn't want to put down a bird who was obviously so full of the will to live. We decided the best solution would be to try and close that hole. If they can avoid infection, chickens can heal from a surprising amount of surface tissue damage, but this girl would certainly dehydrate and die if she couldn't keep in the fluids. We did a little research and gathered supplies and prepared to do some at home surgery. 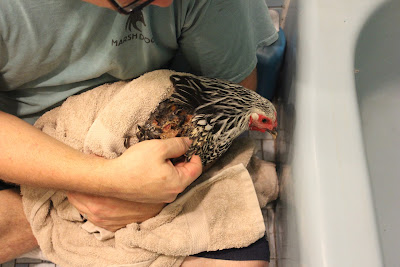 Big Onion wrapped the hen in a towel and settled down on the bathroom floor. I started by cleaning the whole area as best I could of the crusted blood and food then scrubbed it with a surgical solution. There was a lot of excess tissue so first I trimmed away anything that looked like it was already dying. This caused a bit of bleeding, but we applied pressure and she clotted nicely. Since the torn edge of the crop had already started healing, I trimmed away a little bit of tissue to encourage it to close back on itself. Luckily I had some old suture material squirreled away for just such an occasion so I set to work stitching the hole closed with small, close together stitches. Working for the vet, I had some experience assisting with sutures, but this was my first time really trying to close something so big.

Here are a couple pictures before and after the surgery. WARNING: These are pretty graphic! 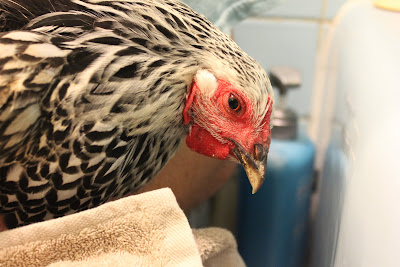 Through all this, our patient never flinched, moved, or made a sound. In fact at one point she fell asleep. We had to rouse her to make sure she was still with us, but she woke alert and clear eyed. Once the wound was totally closed, I cleaned up the area and trimmed away a bit more of the dead tissue. We gave the girl an antibiotic shot to hopefully stave off infection and brought her back out to her pen. Once back outside she started immediately eating and drinking, and to our delight she did not spring a leak! The final job wasn't pretty, and she was still missing a lot of skin on her neck and chest, but if this girl wanted to fight, we might as well give her a fighting chance. 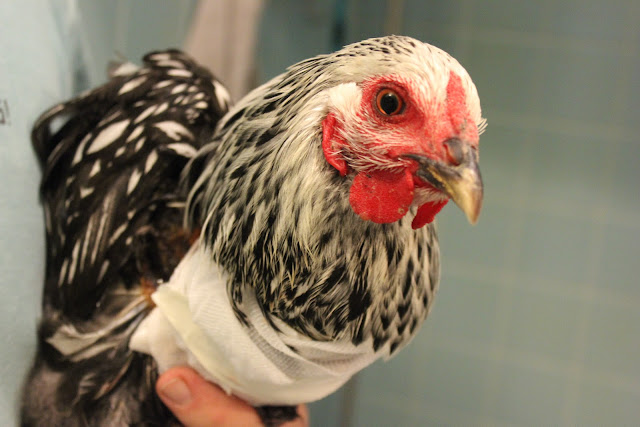 Chickens can be amazingly resilient creatures so we are keeping our finders crossed for this gal's smooth recovery. We don't often name our poultry, but we decided that our brave patient deserved a name. We decided to call her Sally from The Nightmare Before Christmas character with all the stitches. Tis the season and all that.

So far Sally has been healing nicely with no signs of infection setting in. She's eating and drinking and patiently letting us inspect the wound twice a day. We'll probably give her one more shot of antibiotics and keep her contained until that area does a lot more healing.  Hopefully some day in the not too far off future, we'll be putting her back out with the flock to do her chicken-y thing!

Update: I wrote this post shortly after we did the surgery on Sally but never got around to uploading the pictures or posting it. It's been a couple weeks, and I'm happy to report that Sally is doing wonderfully. As I said above, chickens can sometimes heal from surprising amounts of damage and Sally is certainly proving this to be true. We still have her caged, but we've moved her to a bigger enclosure with perch bars and a good view of her friends outside. The wound is almost completely gone with just one spot of scar tissue still sticking out the hole. We've been reluctant to put the girl back out with the group as chickens will pick at anything out of the ordinary on another bird. Plus it is still ridiculously muddy out there. Right now, Sally's biggest problem is that she's mad at being cooped up for so long. For a chicken who literally had her neck ripped open, this is pretty good problem to have!

Here is a picture of the almost totally healed area. What a difference! 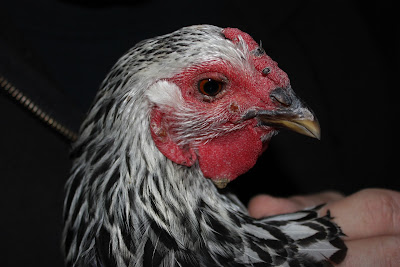