I guess it is fitting to start off this blog with a memorial to the duck that started it all, Mrs. Duckie. 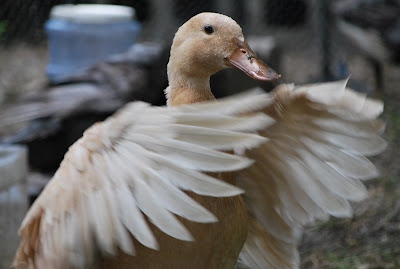 I wanted a group of ducks to practice herding with my Shelties, so during a visit to Luna's breeder in July of 2009 I bought 5 ducks (http://kerath.livejournal.com/317295.html): 3 blue and white Indian Runner boys and 2 Buff Orpington girls. We later found out that one of the Buff ducks was actually a boy, leaving Mrs. Duckie as our sole female duck. She was an incredible layer, laying an egg almost every single day for years. She never even took time off laying in the winter. After I'd had her for a couple years, I decided to try incubating some of her eggs and ended up with 9 ducklings. Mrs. Duckie was the mother/grandmother to over 35 ducklings in her time.

She was very closely bonded with her 2 runner boys, Lionel and Rupert. They barely ever left her sight and if they wandered too far, would come hustling back when she called. 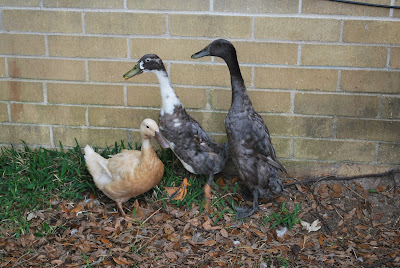 As time went by, the shells of her eggs started to get thinner and thinner. I eventually took her to the local exotics vet who examined the old girl and even ran some bloodwork. His only conclusion was that she had just laid herself out. I guess a duck only has so many good eggs in her. So Mrs. Duckie retired to pet status. We decided she would just live out her years with her runner boys and all her kids and grandkids dropping the occasional thin shelled egg out in the yard. 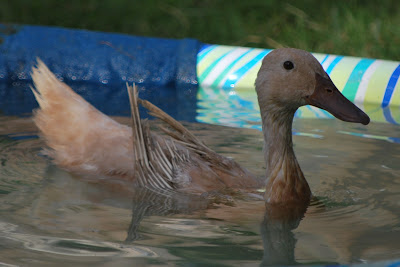 She made the move to the farm without a problem. Loved to go out into the pasture and spend the day grazing. We planned on her dying of old age some day, but the other morning, the Big Onion came in from morning chores and said there was something wrong with the old gal. We rushed back out and picked her up. Part of her wing was missing and the wound looked very nasty. The only thing we can figure is that she was laying too close to the fence and something like a possum or a coon tried to grab her. No bloody, feather strewn scene of the crime or anything.

We gave it a couple of days to see if she would recover. She was a tough old gal, and we'd heard stories of ducks recovering from worse, but she started going down hill fast. Was just laying in one of the nest boxes most of the time. Big Onion did the grim deed while I was at work and buried her in the corner of the poultry yard.

We've had a lot ducks come and go over the years, but every once in a while, you have one that stands out as special and you cannot help but hold a special place in your heart for them. This old gal was sweet and gentle and will be missed.

PS, from Big Onion: I just wanted to add that we would likely not have gotten into duck breeding, which instigated our plans to purchase a farm sooner rather than later, if it wasn't for Mrs. Ducky and her ridiculous productivity. We've bred from her a line of wonderful layers; maybe not the best meat birds, but any duck that lays around 300 eggs per year is certainly worthy of some praise. Rest in peace, good lady. Thanks for getting us moving in the right direction.

Email ThisBlogThis!Share to TwitterShare to FacebookShare to Pinterest
Labels: ducks