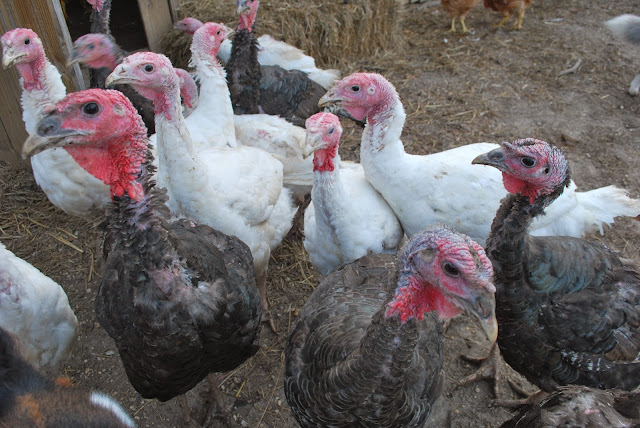 Thanksgiving is just around the corner, and we have already started processing turkeys.

We ended up with about 16 to sell and all are already accounted for. Next year, we will have to increase our numbers again. We have even talked about raising two batches and keeping the first batch in the freezer until turkey eatin' season rolls around. This year we decided to stick to the faster growing broad breasted whites and bronzes. We are hoping that by next year we will have a few of our very own farm bred heritage Bourbon Reds to offer in addition to the commercial breeds.

We learned a couple really important lessons about turkey rearing this year. For one, darker birds really are harder to pluck and end up with a carcass that just isn't as clean and pretty looking as the whites. We also discovered that you get what you pay for with poultry feed. We made the mistake of trying a new brand of feed with the young turkeys that was slightly less expensive and saw an almost immediate halt in their growth. Finally, we learned that giving vaccinations for fowl pox is absolutely essential when raising turkeys. We actually lost a couple of birds to this early on and a few others had to be very carefully nursed back to health. I think the combination of these things resulted in us having smaller birds than we would have liked in the end. 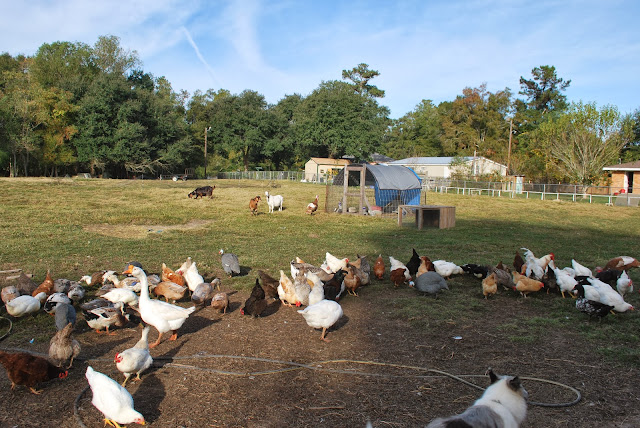 Speaking of Bourbon Reds, our two adult toms must know that it is that time of the year because they have decided to start harassing Luna. Poor Luna is so well trained now not to be aggressive that if I'm not paying attention, those toms end up chasing her around the pasture, feathers puffed and looking ridiculous. I actually saw one of the toms trip on a chicken and do a full face forward tumble while trying to go after the dog. It's hard to look dignified with your big ugly turkey head face down in the dirt!

Don't fret for poor Luna, though. One word from me, and she is more than happy to go after those birds barking, snarling, and pulling out mouthfuls of feathers until those suckers back down. I took the picture above just after Luna read that turkey the riot act. You can see him way back there next to Josie, missing breakfast for being such a jerk. We will probably be processing one of those toms for our own table pretty soon. Hopefully that will help knock the other guy down a couple notches and make life easier for our poor farm dog.
Posted by Kaela at 10:25 AM