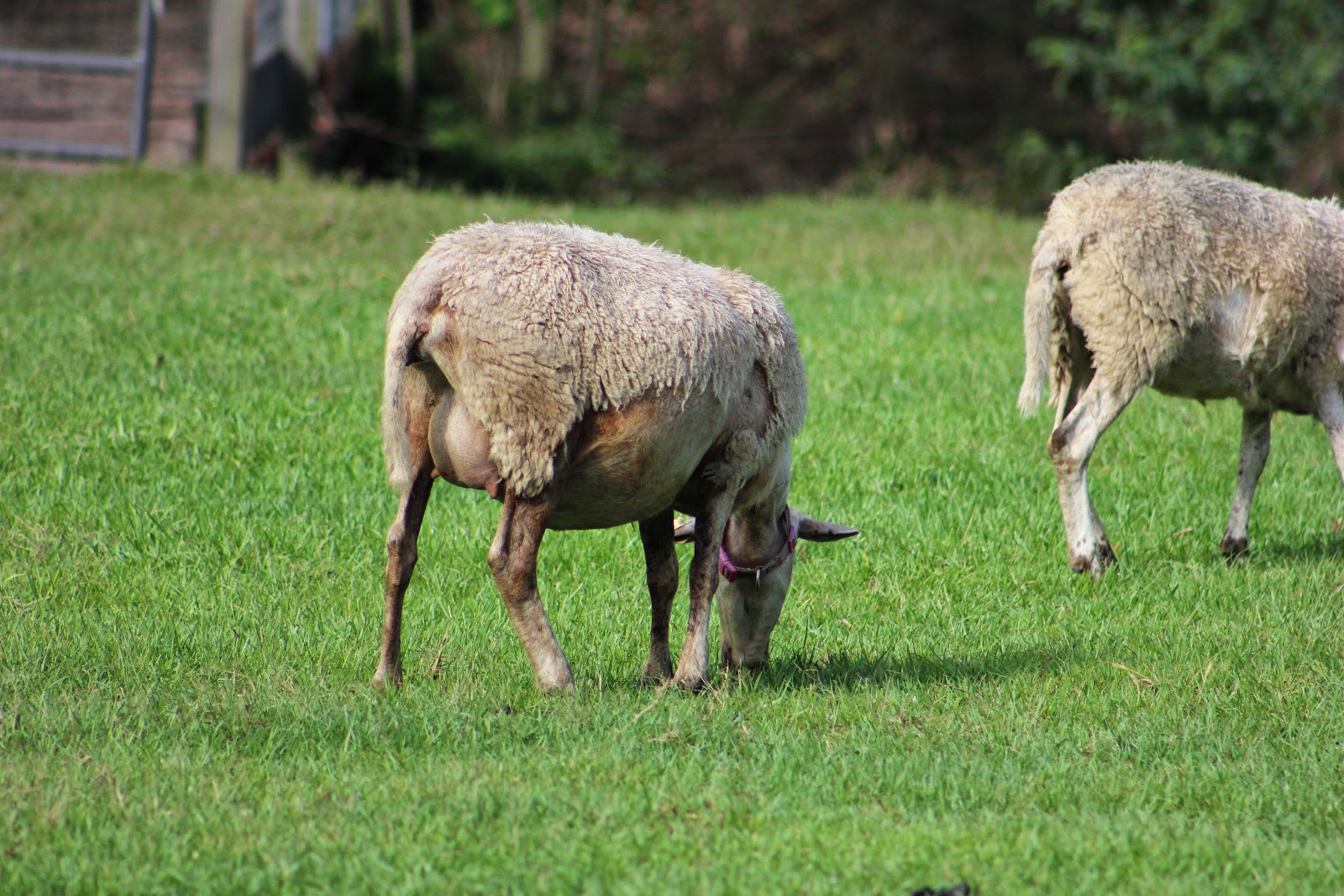 After many weeks (months?) of staring at Patch's big round belly and ever increasing udder, the girl finally lambed last Sunday night/Monday morning. We were sure she by her size that she would have a multiple birth, and she did. Unfortunately, Big Onion found a little ram lamb dead in the covered area where the sheep sometimes like to sleep at night. He looked fully formed but was still wrapped in the amniotic sac. It was hard to tell if he had died before or during the birth process, but either way the little guy didn't make it. I feel bad for not waking and checking on Patch during the night. Maybe we could have saved the little guy, but we'd been waiting so long for Patch to give birth that we didn't know for sure when she would decide to lamb.

The good news is that Patch seems fine and so does her other lamb.... 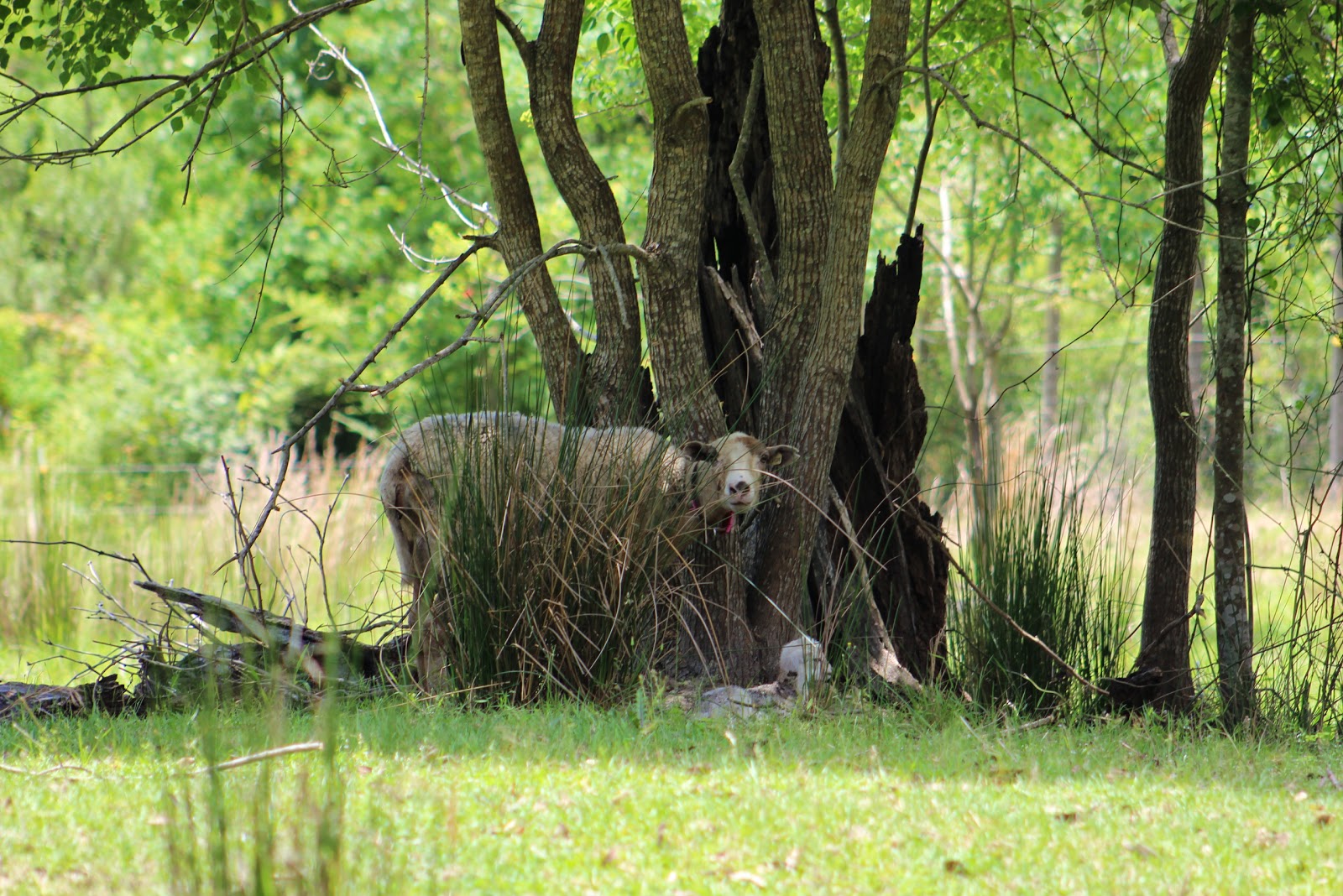 That little spot in the grass is Bruno, our newest lamb here on the farm. 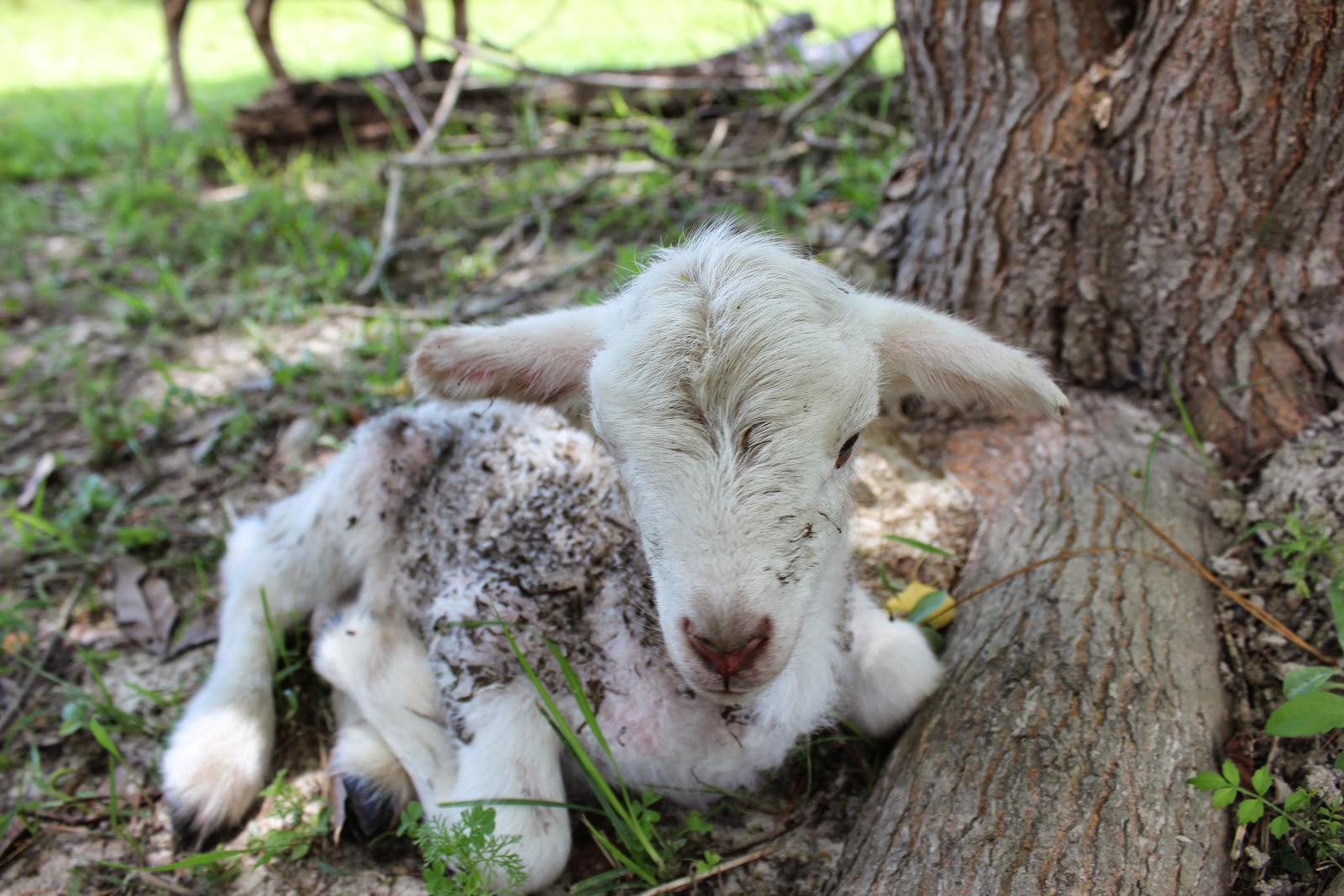 The area where Patch decided to give birth is full of loose dirt so poor Bruno was a bit of a mess that first day. 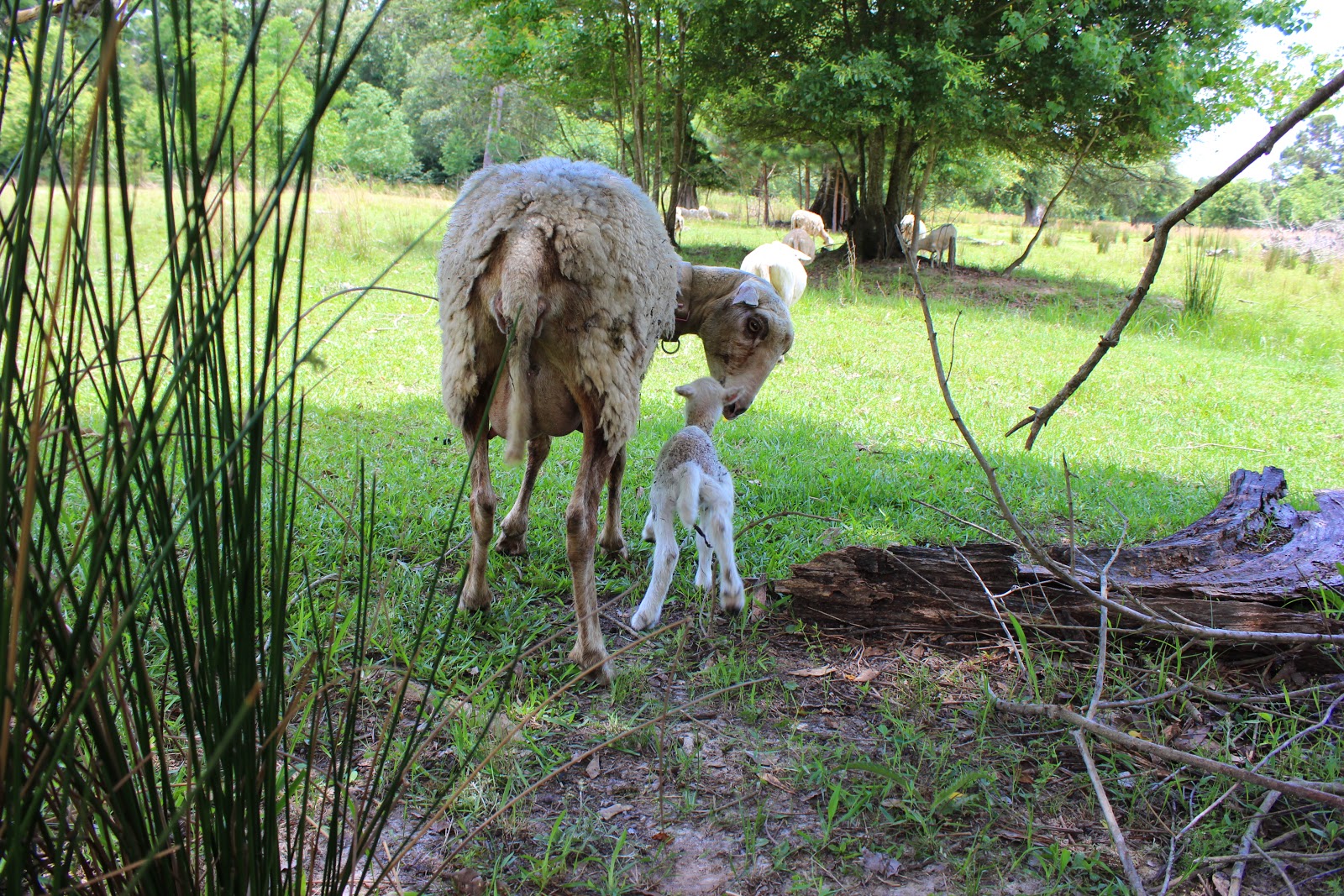 Patch has been a great mother, sticking close to her baby and away from the rest of the flock for the first few days. It is very common for a new mother ewe to keep her distance from the other sheep for a while. I think it helps solidify the bond between mother and lamb. They learn each other's call very well during this time so that if the ever get separated, they are easily reunited with a few calls back and forth. 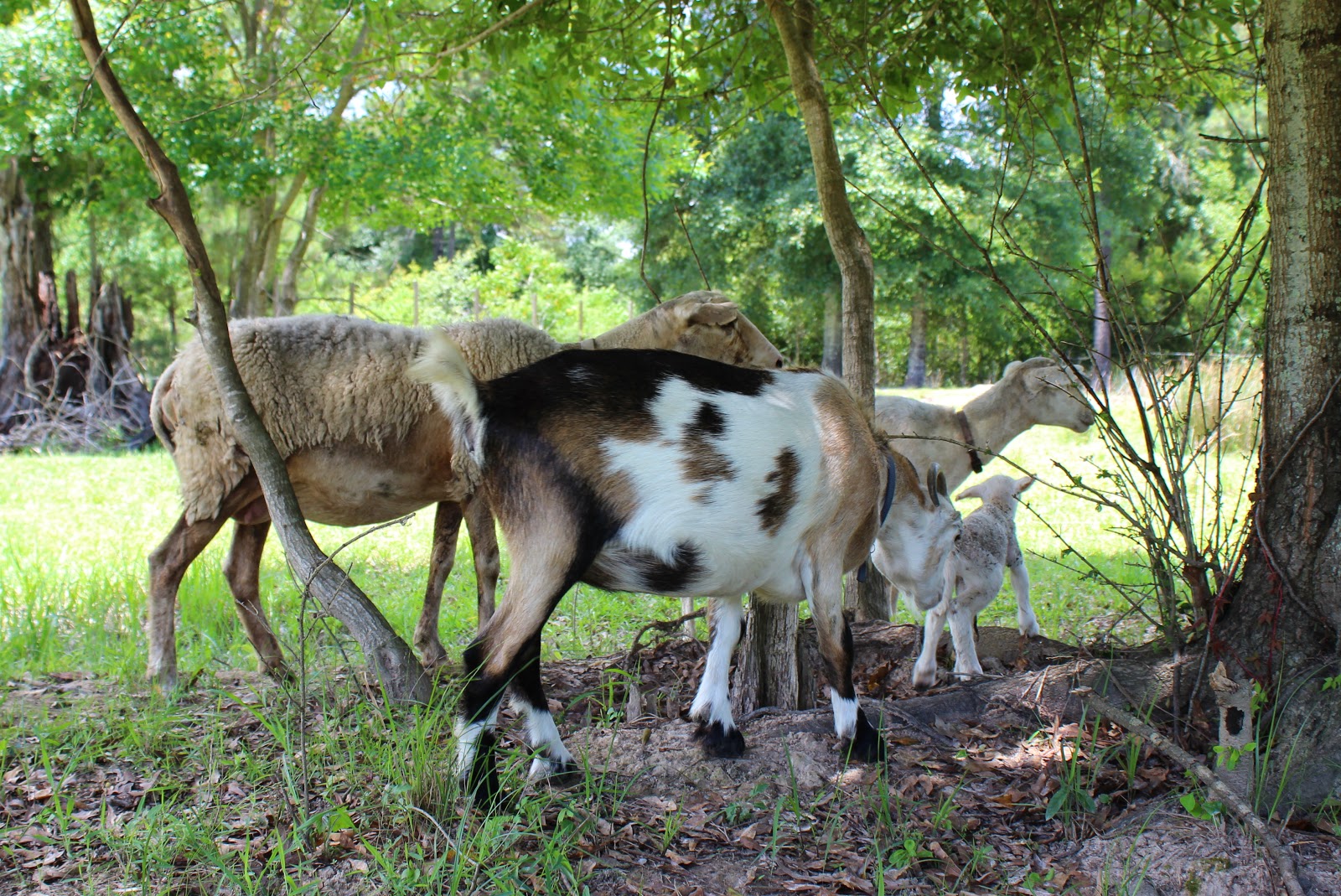 For some reason, Gwen was very, very interested in this new little one. 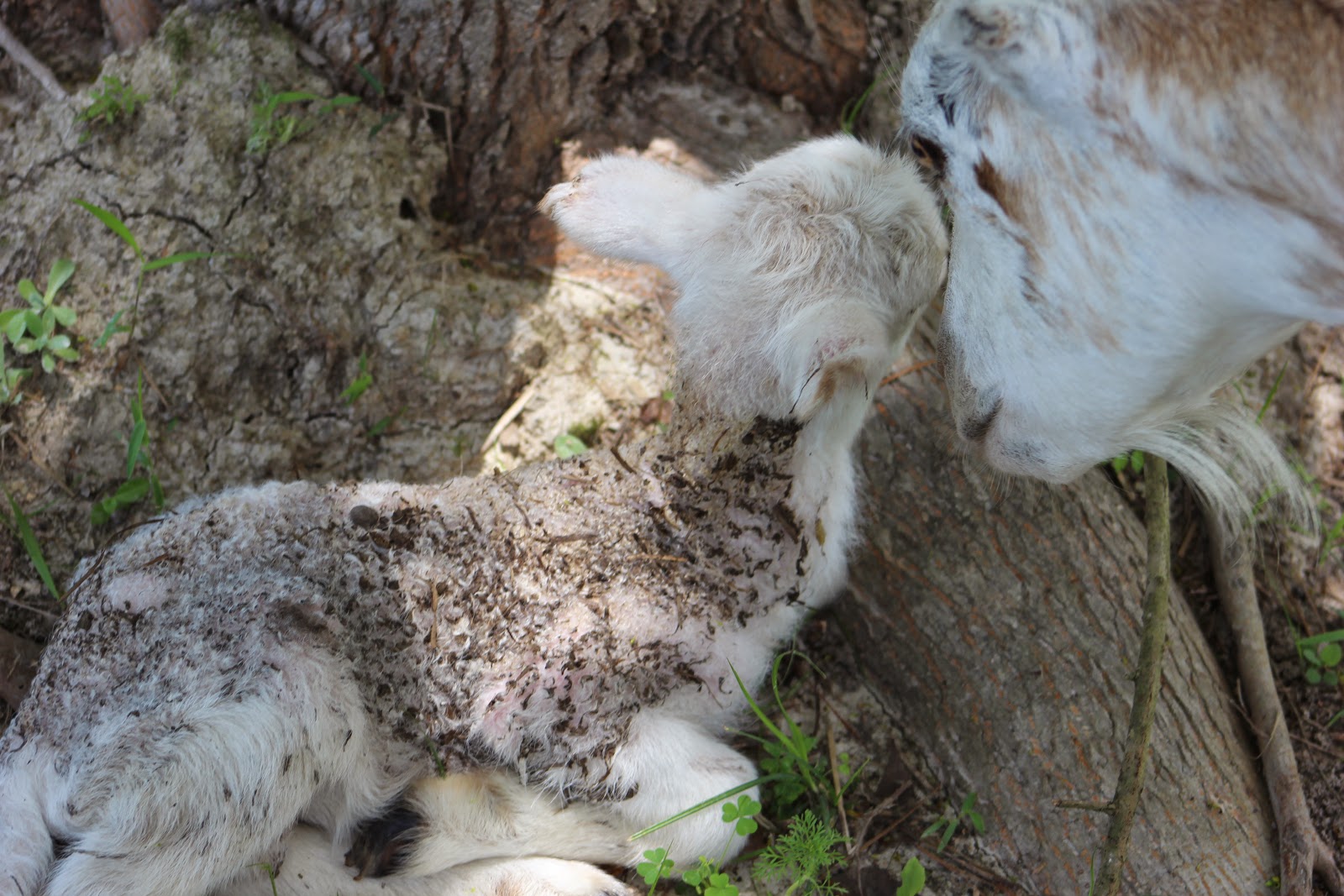 She kept going over to the little one and sniffing him. I guess our little Gwen might be  ready to make some kids of her own. Now we just need to find a mini-goat boyfriend for her! 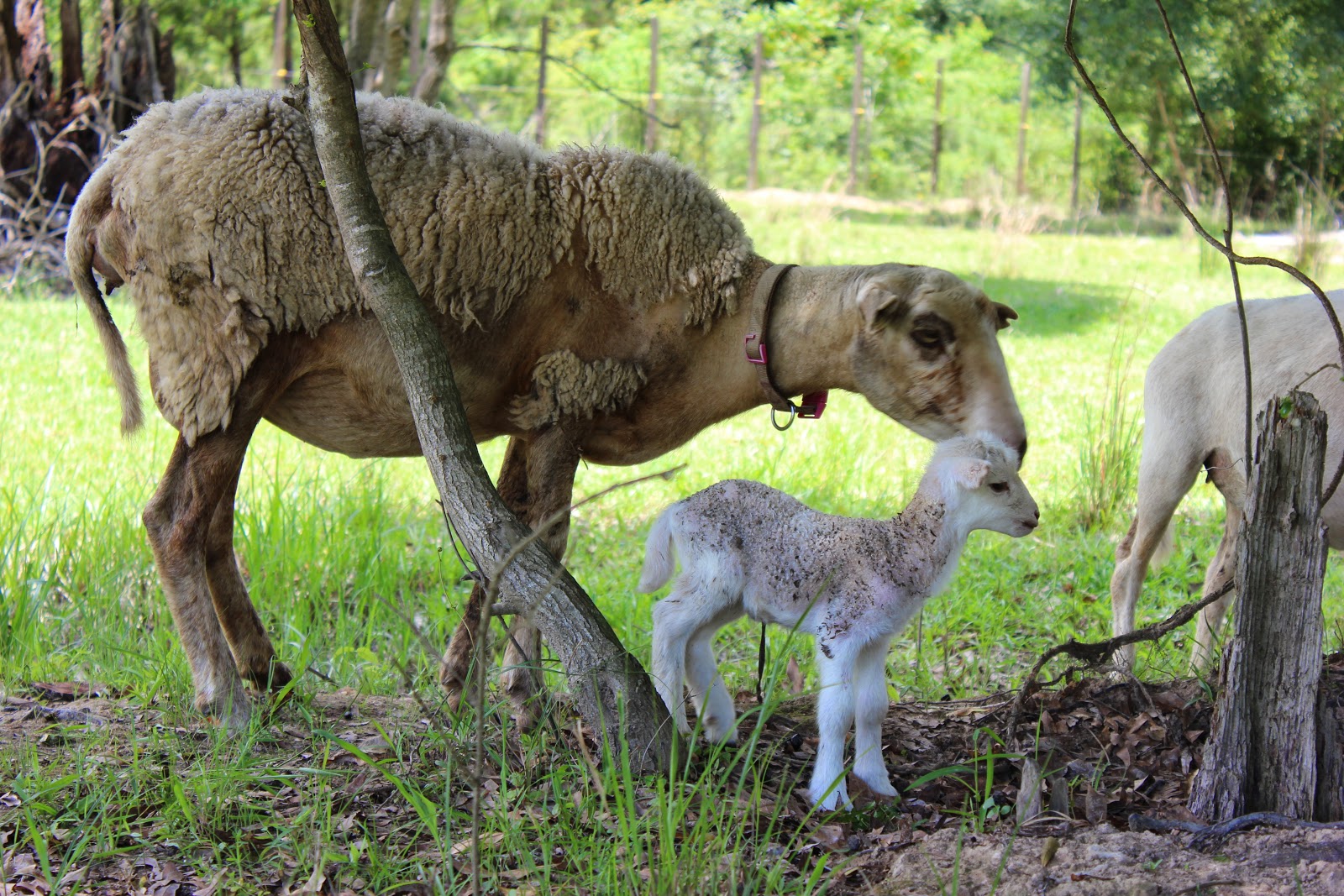 We did run into some trouble with Bruno the first few days of his life. He seemed weaker than normal and by day two it was obvious that his little stools were way softer than they should be. Then he started passing what looked like undigested milk. Not good.

Scours (diarrhea) in a lamb can deplete and kill them very quickly. We tried giving him a dose of Probios, a probiotic paste that usually clears up most loose stool pretty quick, but it didn't seem to help. I was starting to suspect that the little ram lamb picked up some kind of bacteria due to Patch's poor choice of birthing location. 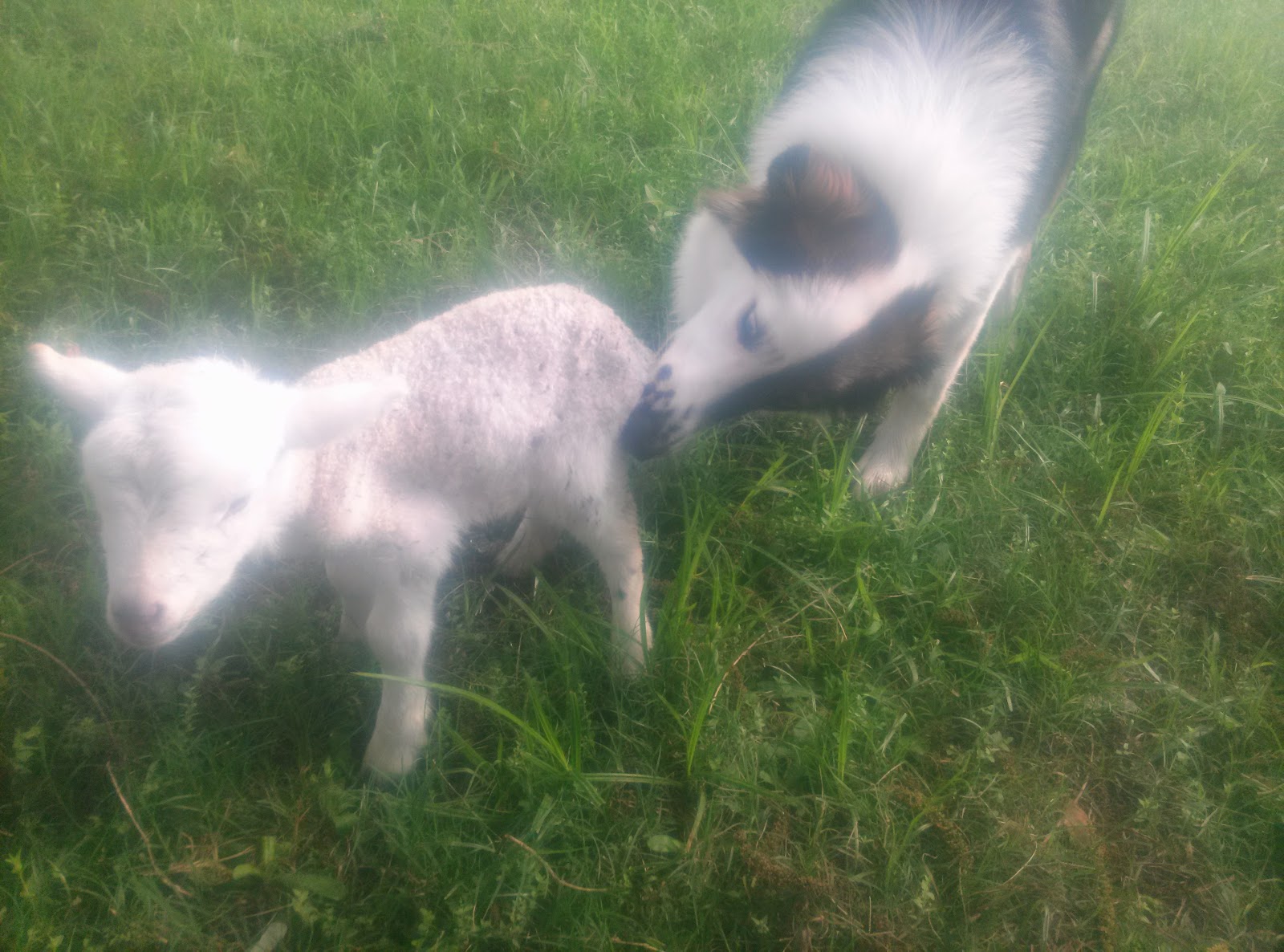 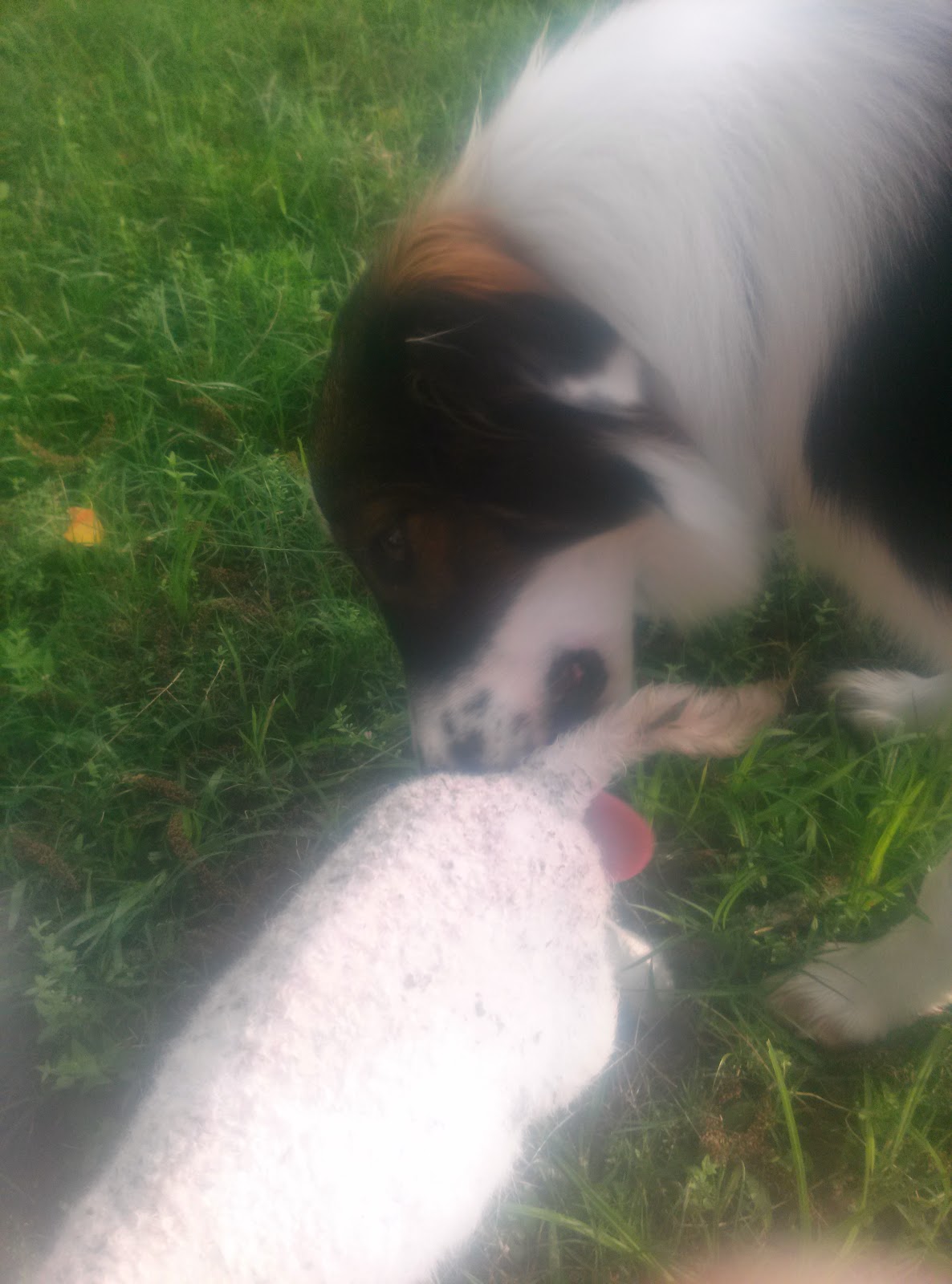 Rialey earned some of her farm dog stripes by alerting me to the problem with the little ram and diligently working to clean him up every time we went to check on him.

It was rather funny because Patch was less than pleased with the "wolf" getting a taste of her baby. She would stand nearby and huff and puff and stomp her feet. Well, I guess that Rialey decided that angry, half-unhinged sheep was a threat to "her baby" and would not let little Bruno anywhere near his mother. Every time he would get up and head in Patch's direction, Rialey would get in his way. If he insisted on going toward his mother, Rialey would gently use her mouth  to redirect him back toward me. I took me three times to call her off that baby and let him go back to his understandably upset mother, and even then Rialey kept her eyes on him any time they were nearby. 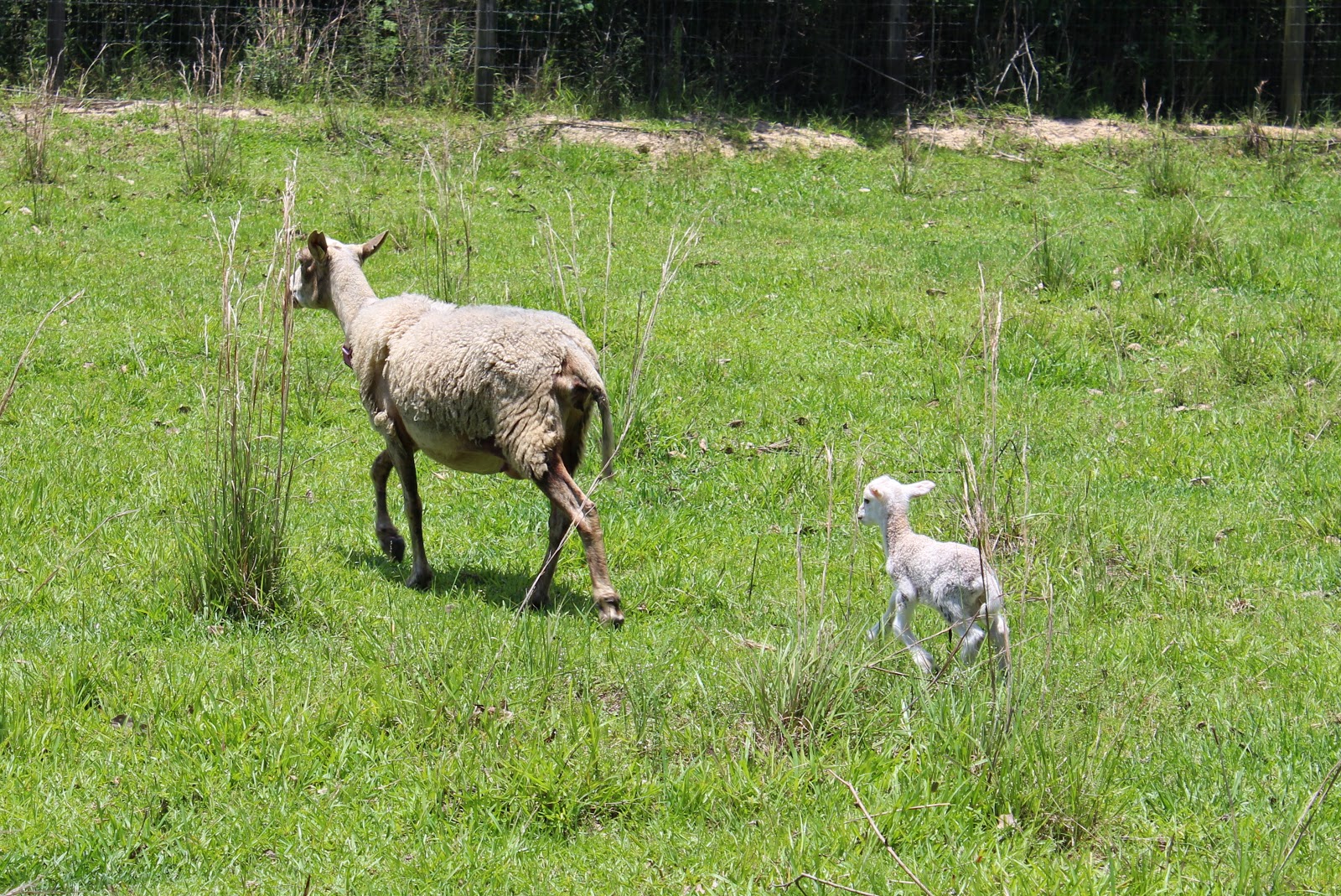 I ended up tube feeding the little one a belly-full of fresh goat milk mixed with goat probiotics, vitamins, and electrolytes  That seemed to do the the trick because by that evening, Bruno was up and running with his mother and making normal lamb poops, and he's been fine ever since!
Posted by Kaela at 5:48 PM