I would like to introduce you to our first lamb.... 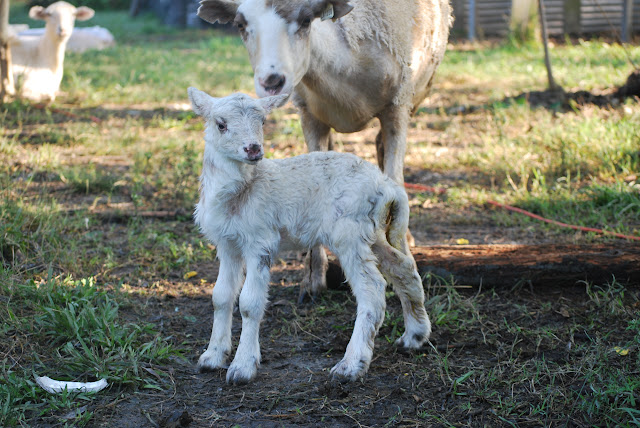 She was born last Wednesday without any help from us. In fact, we got home from work to find her already dried off and on her feet, and since then there has been no stopping her. 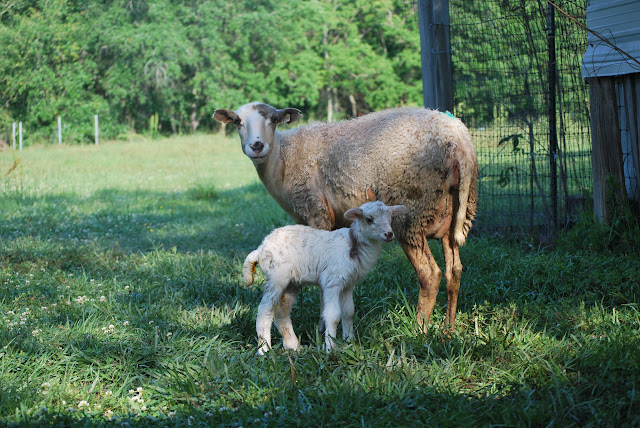 We had a feeling she was coming very soon. Her momma, Patch, has been in milk almost since she arrived and the last couple days before she gave birth she was laying down an awful lot.

Poor thing had a rather rough introduction to the shelties when she was just a couple days old.

Since the lamb was born, I have been using Sonny, our older sheltie, in the evenings to put the poultry away for the night since he is my good obedient boy and won't chase sheep unless I ask. On this particular day, Nova was the first to volunteer for evening duties so I let her come out to help put away the ducks, geese, turkeys, and guineas that had been out doing their free range pasture thing all day. Nova is younger than Sonny and even though she SHOULD have more herding training time under her belt (she was living and working on a small farm before we got her), she is a bit of a goof ball.

Nova walked very nicely out the back gate and down to the poultry pens with me. I asked her to go out and get the first set of ducks to be put away. Well, Nova took a look at those ducks, then at the sheep farther down the field and decided that sheep would be WAY more fun to chase around. She took off straight for the sheep   before I could stop her. I tried yelling a couple times but found that I was wasting my breath. That crazy girl was dead set on herding her some sheeps!

Seeing a tiny black and white wolf heading for them, the sheep took off for the safety of the poultry yard with Nova hot on their heels. Poor Fancy just wasn't up for a full speed chase and soon fell behind the flock. Nova, being the utter ding bat that she is, ran over the poor 2 day old lamb in pursuit of the rest of the flock.

At this point, I was finally able to call Nova off and have her come back to me. Fancy, in the meantime, got back up disoriented and took off at top speed in completely the wrong direction and straight for the last pile of scrap metal I hadn't trucked off to the scrap yard and the creek beyond it!

Now our creek is about 20ft below the level of the pasture and has a rather steep embankment. Fancy heading straight for it had the potential to be a serious problem. Thank heavens our friend A. happened to be visiting. She saw the problem and took off after the lamb while I got the misbehaving sheltie under control.

Fancy ran straight into the scrap pile with a bang and disappeared on the other side. By the time I got there, A. was in full lamb rescue mode trying to head off a very frightened and confused baby right on the edge of the embankment. I called out, "Just grab her!" and A. made a lunge and caught the baby just in time.

We checked her over and found that the poor gal was very frightened but otherwise unharmed. Momma Patch was very very relieved to have her baby returned to her in one piece. 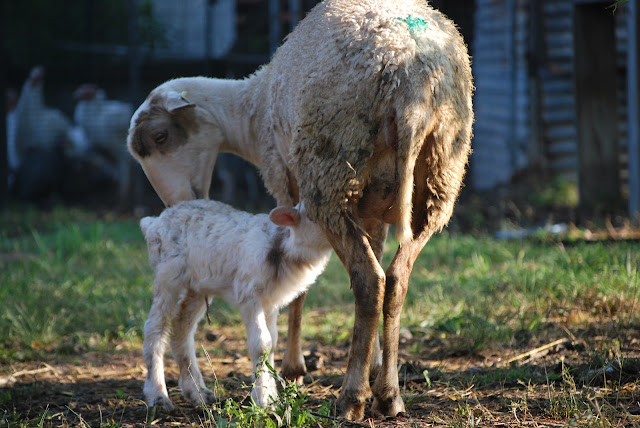