After two trips to the vet, many banamine injections, and some bloodwork, we got some very bad news about our little Mini LaMancha goat, Jenni. 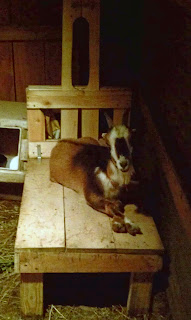 Ever since we got her, she has been holding up her front legs, alternating from one foot to the other. She had a lot of trouble getting up and would walk like a Nazi soldier, goose-stepping with straight front legs and head swaying side to side. At first the vet thought it was laminitis, that her feet were hurting, hence the banamine injections. These didn't seem to help much at all. The next step was steroids, but we weren't sure if she was pregnant, so it was back to the vet for an ultrasound and some bloodwork. 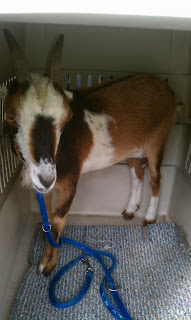 In the meantime, I came across some information about a disease called CAE, caprine arthritis encephalitis. It a virus that usually affects very young goats in the form of deadly pneumonia, but can sometimes show up in older goats as progressive, crippling arthritis. The vet said he had never even seen it in an adult, so didn't even think to suggest this as a possibility. He drew blood for a pregnancy test and for CAE.

Well, the pregnancy test came back negative, but the CAE was definitively positive. In a way, the negative pregnancy test was good news because goats with CAE can pass it on to their young thru their milk. We would have had to separate mother and baby at the moment of birth and bottle raise the kid.

So, we are drying Jenni up so that she doesn't have the extra stress on her body of producing milk all the time. We are trying out some different combinations of joint supplements to see if we can find something to help her get around a little better. We also secured a much bigger area for the girls to live in so that she can get more exercise and eventually be allowed to graze the pasture with the sheep. 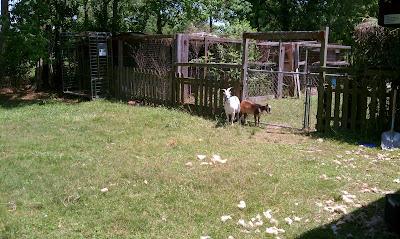 Of course now we are worried that our other goat, Josie, is also carrying this disease. Today, I drew blood from her to send out for the same two tests.

As a side note, Josie was less than pleased with my attempts to steal her blood. She actually got her head turned around in the milk stand and bit me in the face! Thank goodness goats don't have top teeth so my face was unharmed. Must have been a warning shot.