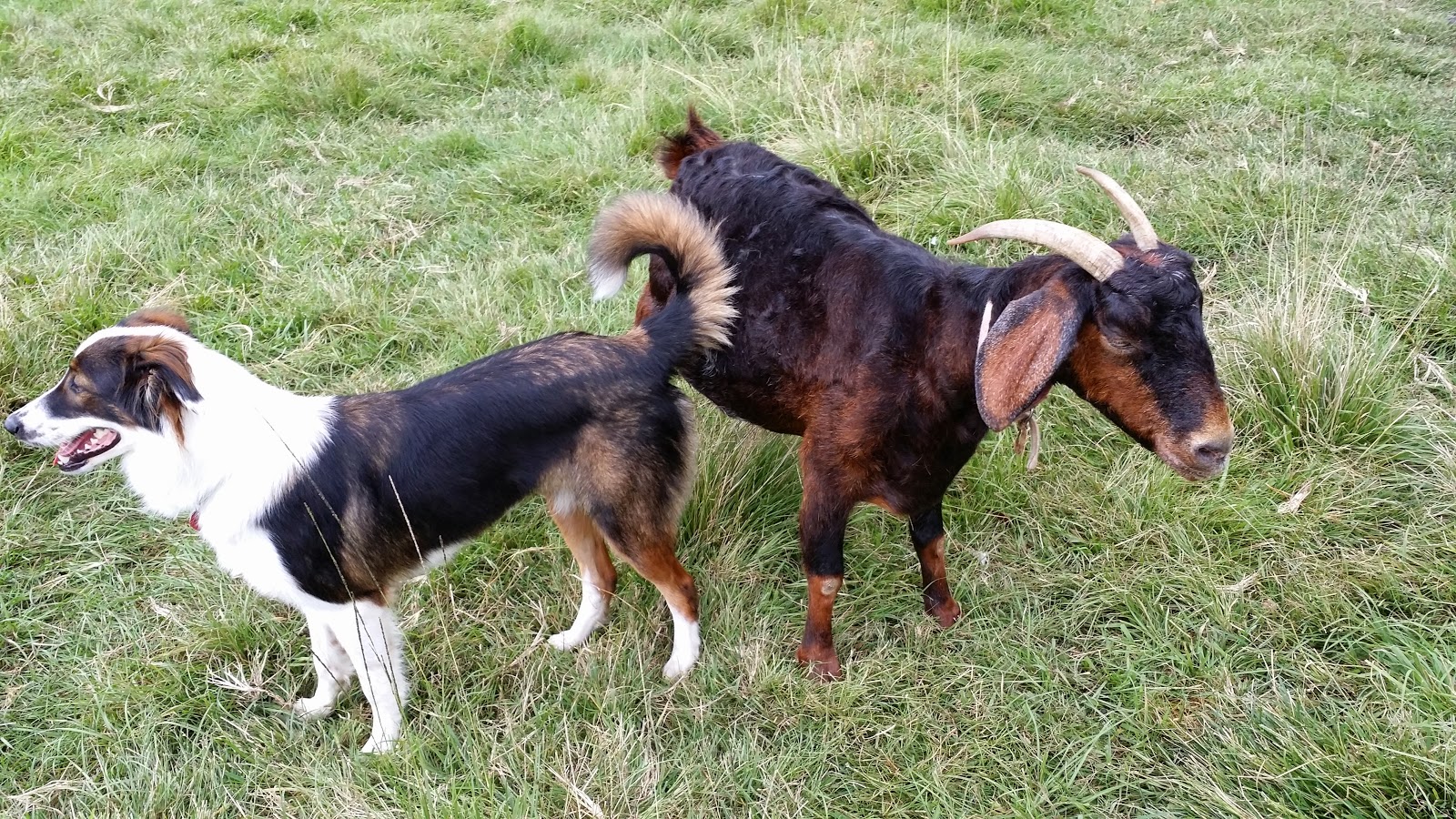 Last Sunday morning after chores were done, Big Onion and I took a walk to the back pasture to take Rialey swimming in the pond. As usual we were accompanied by the entire herd of goats. That morning, I asked Big Onion to check Gertie's color. There was nothing tangibly wrong with her, but she just didn't seem right. He did a quick check of the mucus membranes around her eyes and said she looked normal.

That evening when milking time came around, I gave my usual call of "Ladies!" and all the girls piled into the milk room as normal. Although Gertie was doing her usual jostling with the other girls and reasserting her place as one of our top herd goats, there was obviously something wrong. She had foam around her lips and nose. She was grinding her teeth and moaning a little. There were no signs that she had been vomiting or having diarrhea, but the girl was certainly in some kind of pain.

She still wanted to eat, so I offered her just a handful of hay. She would try to eat it then go back to grinding and foaming and wiping her face on every available surface: her feed bucket, the walls, her daughter Eve's back. After milking, we tried our best to get a look into her mouth to make sure something wasn't stuck somewhere or that she hadn't broken a tooth. We had a heck of a time getting her mouth open, but once we did, everything looked normal.

We gave her a dose of banamine for pain, some baking soda and oil in case she was bloating, and a couple of charcoal pills on the off chance that she had eaten something toxic. We gave the rest of the herd a second look over, but no one else seemed to be having any problems. That night we closed Gertie and Eve into the goat yard so no one would bother them with fresh hay and a bucket of clean water and went to bed.

Early the next morning Big Onion left for work and I threw on my closes from the day before and ran out expecting to find Gert back to her usual self. Instead I found her laid out in the dirt of the goat yard looking terrified and unable to get up. I called the vet and asked them to please come out to the farm as soon as possible. Unfortunately, the only available vet was already on another farm call and wouldn't be free for a couple of hours. My only other option was to try and bring the goat to the vet's office.

I should mention here that Gertie is our biggest and heaviest goat by far. She's actually the biggest animal we have here on the farm weighing in at at least 150-175lbs. Loading her into the back of my car on my own seemed almost impossible, but it had to be done. I grabbed an xpen and some hay quickly and set up the back of my car for livestock transport. I pulled the car into the pasture and backed right up to the goat yard. Luckily, I was able to get Gertie back on her feet and walk/drag her to my waiting vehicle. I managed to get her loaded by lifting one front foot at a time onto the tailgate then heaving her back end up and in.

Once in the car, she fell over again and would not get back up. She was in distress and moaning the whole way to the vet's office. I actually had to pull over at one point during the short trip to put her in a better position and make sure she could breath ok.

When we arrived at the vet's office, we tipped her out of the car and onto her feet. He gave her a thorough exam and decided to pass a tube from her mouth into her stomach and treat Gertie for possible bloat. This was easier said than done has she had clamped her mouth so tightly shut that it took three of us and a pry bar to get her mouth open enough to get the tube in place. In the process, the poor girl bit her tongue rather badly. Ouch!

The vet filled her belly with bloat medication, and we waited and watched her for a bit. Gertie seemed to be improving a little. We loaded her back into my car and I took her home again. On the way home, she collapsed in the car and was making distressed sounds again.

Once home, I got her out of the car and back on her feet. We walked back into the milk room where she seemed to be ok for the time being. I gave her another dose of banamine for pain and went about the normal business of feeding animals and milking the other goats then went inside for some breakfast/lunch. 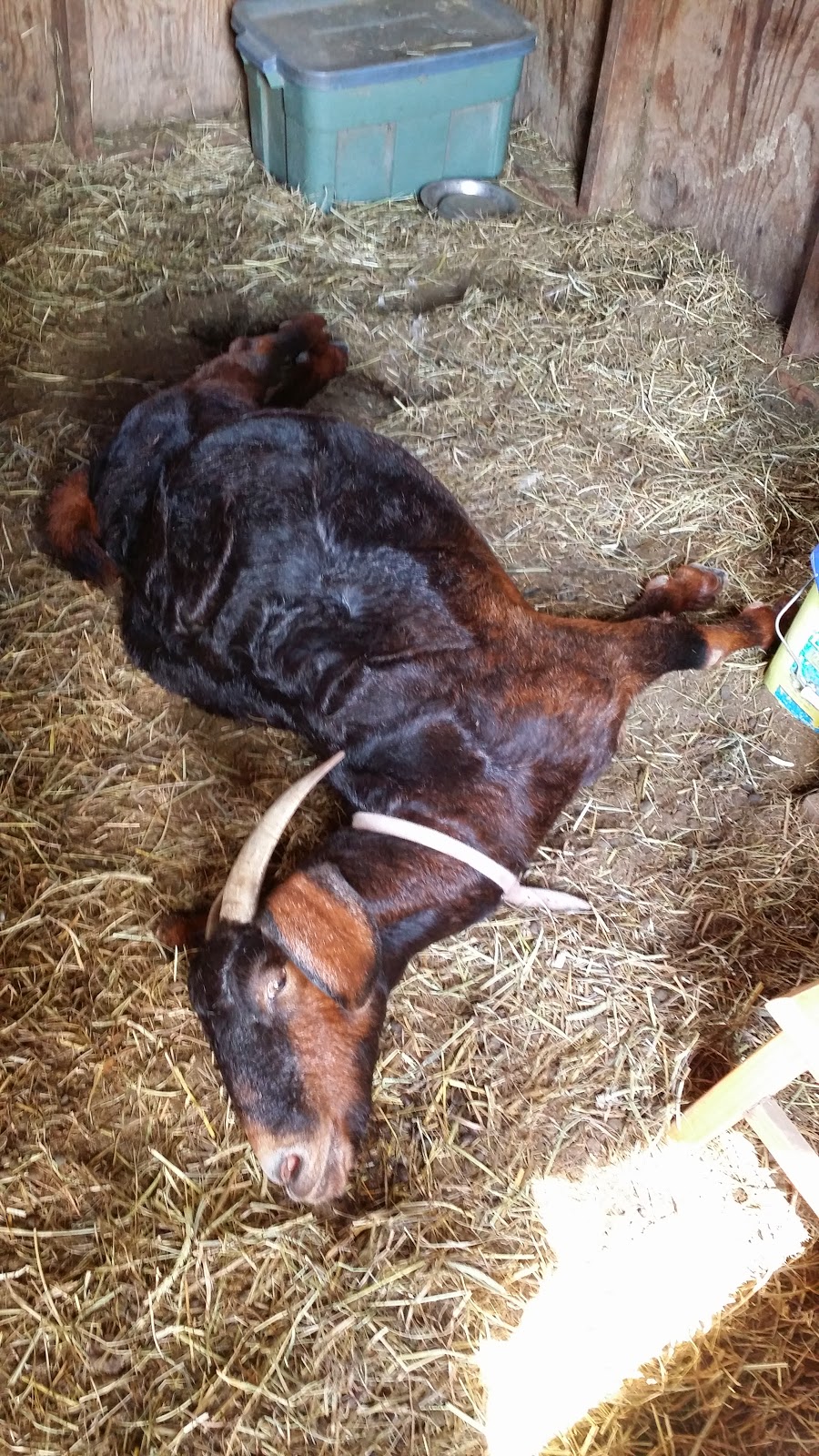 When I went back out to check on Gertie she was once again laid out on her side. Her gut was full of air, her legs were rigid, and she was very upset. By sheer force of will, I got her back up on her feet and massaged the air out of her rumen. I spent the rest of the day in that room with her. She would have these terrible spasms and fall over with her back legs thrown straight backward. I assumed she was having painful stomach cramps. Over and over, I got her back on her feet because if I left her laying down her gut would just fill with air. I ended up sitting on a stool with her leaning into me for most of the day. I gave her more oil to try and combat the gas formation and aloe to soothe her stomach. Nothing seemed to help at all.

She just kept getting worse and worse. Big Onion got home and did all the farm chores while I stayed in that room tending to a very sick Gertie. Once chores were done, Big Onion took over sitting with her propped against him and constant massaged the air out of her gut. As the sun set, she started tilting her head to one side, and the muscle spasms started to get worse. Her entire back was bowed up, and she could not seem to relax it all all. Big Onion brought up the idea of tetanus and I got the vet on the phone at home to discuss the it as a possibility. He seemed reluctant to agree to the idea, but recommended couple treatments that might help her. He also said that if she had tetanus, we would have probably found a wound of some kind that looked nasty and infected. I thought back to a couple weeks before when we had pulled a small piece of metal out of her hoof, but I had checked that hoof since and it was fine.

We gave her the treatments. At that point, we could no longer keep her on her feet, so we laid her down with her head propped as best we could and made a quick run out for some fast food. It just happened to be the date of our first wedding anniversary so our planned fancy dinner got downgraded to the local Taco Bell drive-thru with me still wearing yesterday's clothes and neither of us smelling none too pleasant.

A couple hours after the treatments she was showing no signs of improving. She was in pain and scared and exhausted so we made the decision to put her out of her misery. We'd tried everything we could and we could not let this sweet girl suffer anymore. It was while she was laying there that I found the wound. On the point of her sternum, right between her front legs there was a wound the size of a nickle. It looked like a deep puncture and was obviously infected. It probably happened when Gertie hopped one of our fences some time in the last couple weeks. For a rather short and heavily built goat, she was rather good at going over fences.

I talked to the large animal vet the next morning and we are pretty certain that it was tetanus at this point. The sad and frustrating thing is that this is preventable. There is a vaccine to guard against tetanus that we actually have in our refrigerator right now. We bought it several weeks ago and had not gotten around to giving it to everyone. I guess this is just another lesson that the farm had to teach us the hard way. When it comes to the health of the animals, there is no putting things off until tomorrow.

Our neighbor was kind enough to come with a backhoe to dig a hole on the hillside of the first pasture so that she could be buried here on the farm. I like to think she is still up on that hill watching over her daughter, Eve who is due to have kids of her own this winter. 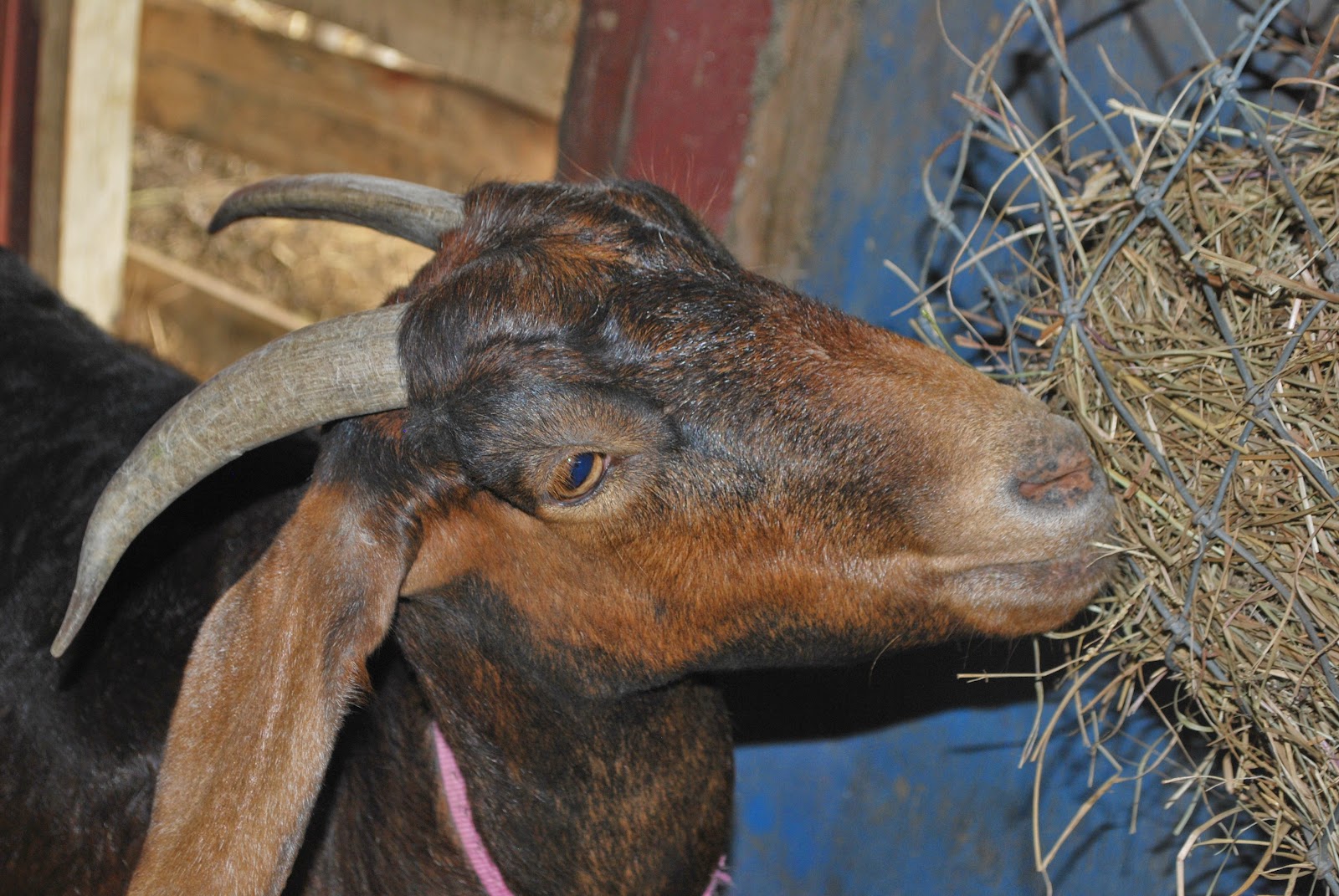 We will miss our sweet Gertrude. She was a headstrong, bossy goat who was always so sweet and loving with us and everyone who visited. She looked like an old dumpy lady with a saggy udder and paunchy sides, but she carried herself like the queen of the herd. She loved to have her neck scratched and liked to stand with her  head pressed into you for attention, the goat equivalent of a hug.