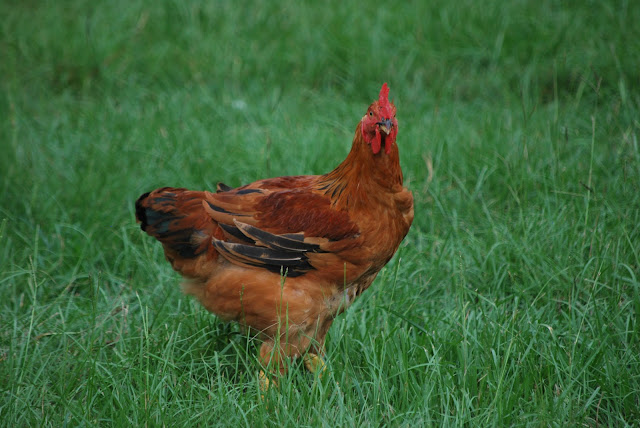 On Sunday we processed about half of our red broilers. I have to say, of all the meat birds we have raised, I think the red broilers are my favorite. They aren't in the least aggressive. They grow at a reasonably fast rate without outgrowing their feathers or turning into fat slobs like the cornish crosses tend to, and they were have happy to go out and forage in the pasture. To top it all off, they looked great when processed with a good amount of meat on legs and chest. Unfortunately, these were hatchery birds that we just grew out. As we have mentioned before, our goal is to have a sustainable flock of meat birds that are born and bred here on the farm.
To that end, on Monday morning, Luna and I decided to sort out the Dark Cornish and White Rocks males that are just starting to reach maturity. Our plan is to keep a rooster from each breed. We hope that crossing that Dark Cornish rooster with White Rock hens will result in fast growing, well muscled birds. We are also keeping a White Rock rooster so that we can make more of the breed in the future. 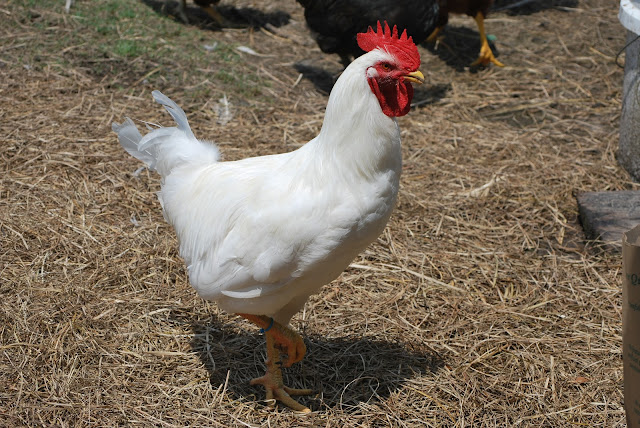 Luna and I bravely ventured into that pen filled with about 25 crazy adolescent chickens armed with only an Xpen and a handful of colored zip ties! It was quite a struggle, but eventually we got the few roosters from each breed separated from the hens and the other layers. After that, it was a matter of picking the biggest rooster of each breed with the best temperament. The top two choices got banded, first choice in blue and second in red. Above is our first choice White Rock. For the next two weeks, we will watch these roosters to see who is the calmest, most watchful of his ladies, and who has the crow we can best live with. Let me tell you folks, not all rooster crows are created equal and right now it sounds like a prepubescent boy's choir out there with all those boys figuring out their calls. "Cock-a-doo-do-BLARGH!" 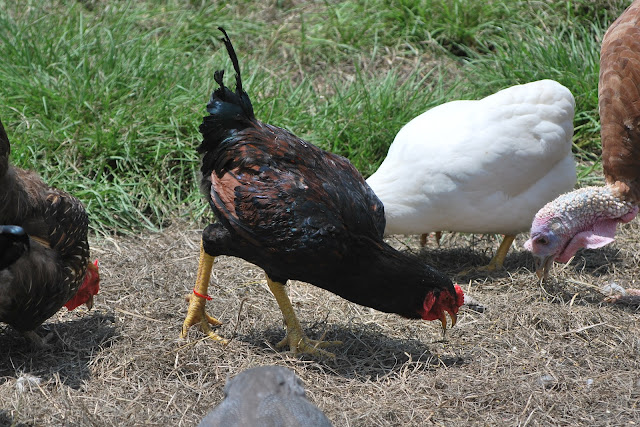 Here is the number two Dark Cornish. I couldn't find the number one to get a picture because by the time we got finished chasing, sorting, judging, and banding all those birds in that closed pen with its metal roof, I'd nearly given myself, the dog, and half the chickens heat stroke. I banded that last rooster and looked over to see all the birds open-beaked panting with their wings held out, Luna had her tongue nearly dragging the ground, and my head felt like it was going to spin right off my shoulders. Yeah, it's hot out there. Next time I decide to chase chickens, I think I'll get up a little earlier in the morning.