When a rabbit momma kindles (that's rabbit speak for giving birth), we check on those newborn bunnies twice a day for the first few days. We actually pick up each kit and do a quick nose to tail check to make sure everything is ok. No sticky poops on the rear, no wounds, no birth defects. We also keep a count on each litter to make sure none of the little ones have fallen out of the nest box or gotten buried in the hay or stuck in a corner. Since mother rabbits really only feed their young twice a day, a baby bunny can starve to death very quickly by missing just one or two feedings. 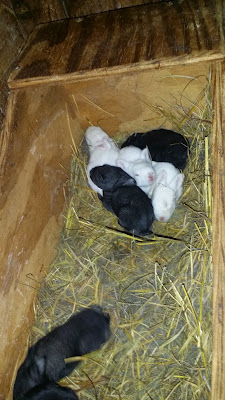 As the bunnies get older we don't need to check on them as frequently. By the time they are fully furred and their eyes start to open, we generally just give them a quick look over at feeding time. Well, Big Onion was feeding Thing 1 this morning when he noticed something small and white crawling on the ground underneath the rabbit cages. It turned out to be one of her bunnies that had somehow come out of the nest box and fallen through a small hole in the side of the cage.

Thing 1 had in impressive 9 kits in her very first litter was doing a wonderful job of mothering the large group. A couple days after they were born, I did have to put down one bunny who seemed to be paralyzed from the waste down. I noticed the problem on the day they were born, but was hoping it was just a temporary problem. When the little one didn't improve and seemed to be getting thinner and thinner, I decided to do the kind thing and put the little one down before it starved to death. That brought her litter down to 8.

After recovering the wayward little one off the ground, Big Onion decided to do a head count and came up with just six. Two bunnies were just missing. We assumed that they too had someone made it out this small hole in the cage and starting searching the ground around the poultry house. We looking under things, moved feed bins, and upended buckets. We even called the dogs in to see if they could scent out the missing kits. No luck. We assumed that the little ones had probably crawled too far from home and been eaten by something. Rabbits are basically nature's fast food, being prey to just about anything that eats meat. The dogs had been in and out of that room. There are snake and racoons all around. Heck, even chickens will snatch up a little furry thing crawling by if they get the chance.

I patched up the hole in the pen and headed back inside with slightly heavier heart that I'd started with that morning.

We went about out day running errands and cleaning house until it was time to head back out for chores again that evening. We put away birds, called in the goats, and fed all the rabbits. Big Onion headed off to milk the lady goats while I gathered feed for the sheep. These days the sheep are getting a mixture of alfalfa, corn, and sweet feed at night to help keep their weight up, especially with so many nursing mommas out there.

Once the feed was mixed, I headed out with the full bucket expecting Rialey to be at my heels as usual move and hold the sheep away from me and the feeding area, but she was nowhere to be seen. I called her once, twice, a third time and I finally saw her pop out from between the poultry house and the feed shed. I could tell right away that she excited about something. It took me called her again for her to come over and do her usual job of moving and holding the sheep. As soon as I had dumped the bucket of feed and released her, she jetted back between the buildings.

I followed and asked her to show me what she'd found. She jumped backwards to reveal a tiny, muddy white fuzz ball toddling around in the mud. I quickly scooped the little one grateful that at least we'd found one of the two missing bunnies. Then Rialey was back between the buildings again clearly indicating that the other bunny was back there. In the dark, I could barely see the little black thing trying to crawl farther away from me and from the dog. Since there was no way I could reach it, I took a deep breath and asked Rialey if she could retrieve that bunny. I knew asking a natural predator and carnivore to take something so little and so full of meat into her mouth could end very badly, but I was trusting that Rialey's nurturing instincts would outweigh her prey drive for just long enough to get that bunny to safety.

All I could see was Rialey's backside as she followed the bunny farther and farther away from me. I would see her move forward, crouch down, then jump backwards. I could only assume that the bunny was jerking and bouncing away from her as very young bunnies tend to do do when they feel threatened. After what seemed like forever, Rialey backed out without the bunny and looked at me with a clear message that I was going to have to catch that thing myself. Luckily, all Rialey's attentions had driven the little thing far enough that I was able to reach it from the other side. 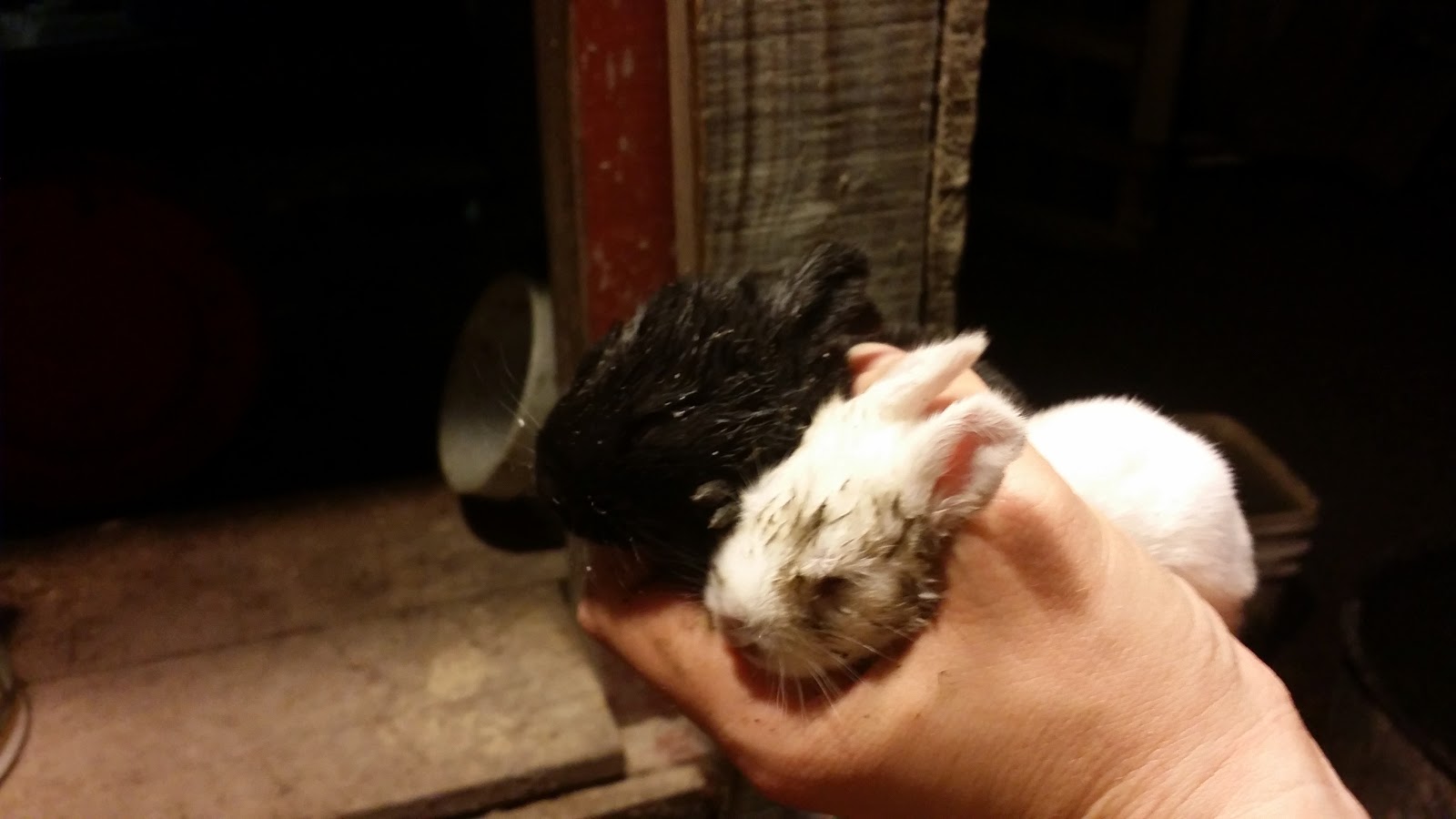 Both bunnies safely in hand, I brought them inside to try and clean up some of the mud and dog spit before putting them back with their siblings. The little white one was a bit on the thin side, but neither kit seemed the worse for their adventure. It's truly amazing they survived as long as they did down in mud and dirt, the little things don't even have their eyes fully open yet. 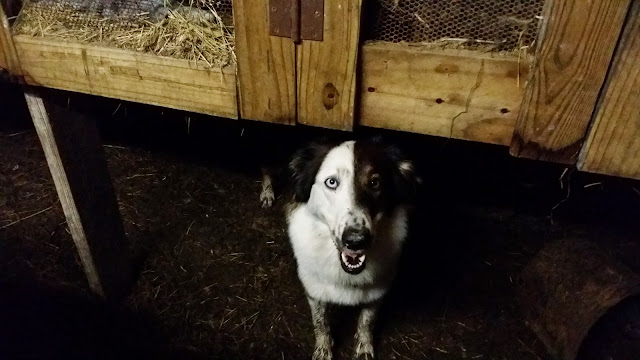 What's even more amazing is that Rialey not only found those bunnies, but did them no harm whatsoever. She has always had a very strong mothering instinct and a very, very concerned and protective nature when it comes to the rabbits. In this case, those instincts saved the lives of two very lucky little ones.
Posted by Kaela at 8:47 AM