It was a pretty typical Saturday here on the farm. Big Onion had driven to the city to make egg deliveries. I was doing some cleaning and laundry around the house. That morning we had put all the lady goats across the bridge to graze in the back pastures. This meant that Gimli and the young bucklings could get out of their enclosure and browse around the first pasture for the day. Something they don't get to do nearly often enough.

I had just taken out all of the milk we'd stored in the fridge for the last few days with the intention of making another batch of goat cheese dog treats when I noticed it had started to drizzle. Now there is no real rain cover in the back pastures. There are lots of big trees which are great for shade but not so great for keeping water phobic princess goats from a fate worse than death...getting wet!

It was just drizzling though so I thought maybe the girls would survive. I poured the first gallon of milk into the pot and started the gas fire underneath when I heard a clap of thunder and looked out the window to see the rain was getting much heavier. A couple of guineas were flapping around and squawking like they were certain the sky was falling. Behind them on the bridge I could see the ladies standing at the gate in the rain. I swear they were hopping from foot to foot in an effort to dodge the raindrop and keep their dainty hooves from getting wet.

I breathed a heavy sigh, turned down the heat on the milk, and threw on my rain jacket and boots. I figured this would be an quick trip. Close up the buck pen where I was sure that all four boys had already taken shelter the moment a cloud appeared in the sky then open the gate and save my poor ladies from melting on the spot.

I trudged through the rain and mud to the door of the buck pen where Gimli, our adult buck, greeted me with a happy, grunty little hello. Little Bruno was standing behind him munching on some hay, but his brother Victor and half brother Legolas were nowhere to be seen. Crap.

Sighing again, I trudged to the back of the first pasture and opened the gate, in the process running face first into the thankfully unplugged line of electric fencing running above the opening. Once on the other side, I had to trudge back up along the fence line calling and following the sound of distressed young boy goats.

Finally, Lego popped out of the heavy underbrush along the fence and ran straight to me. At that moment, I was so grateful we'd taken all that time to tame this little spooky kid. So much so that the sight of me in a storm was something to run to instead of away from. I scooped up the sad and soggy little guy and tossed him right over the fence and into the buck pen. A few feet down, Victor appeared and ran straight to me just like his brother before him. He got the same treatment.

OK, problem solved. Time to open the bridge gate for the goat ladies and head back to my cheese making, right? Wrong. When I straightened up after this time successfully ducking that line of electric wire at the gate, I saw that Apple was standing out in the middle of the pasture with her one day old lamb. Both were soaked and the tiny lamb was laying on the wet ground. I made my way through the standing water to them and picked up the baby ram. He was sopping wet and his rear was totally clogged with sticky colostrum poops. Having no other way to clean him and figuring at this point what was the difference, I used my hands to clear his rear and rinsed him clean in a nearby puddle. Having taken care of that, I carried him low to the ground and facing his mother so that she would follow us both back to shelter where she and the lamb could finally get dry. Miraculously, I managed to back my way across the pasture while dangling a lamb and calling his dumb, silly mother without landing on my backside in a puddle. Once mother and son were safely under cover I washed my hands very thoroughly. 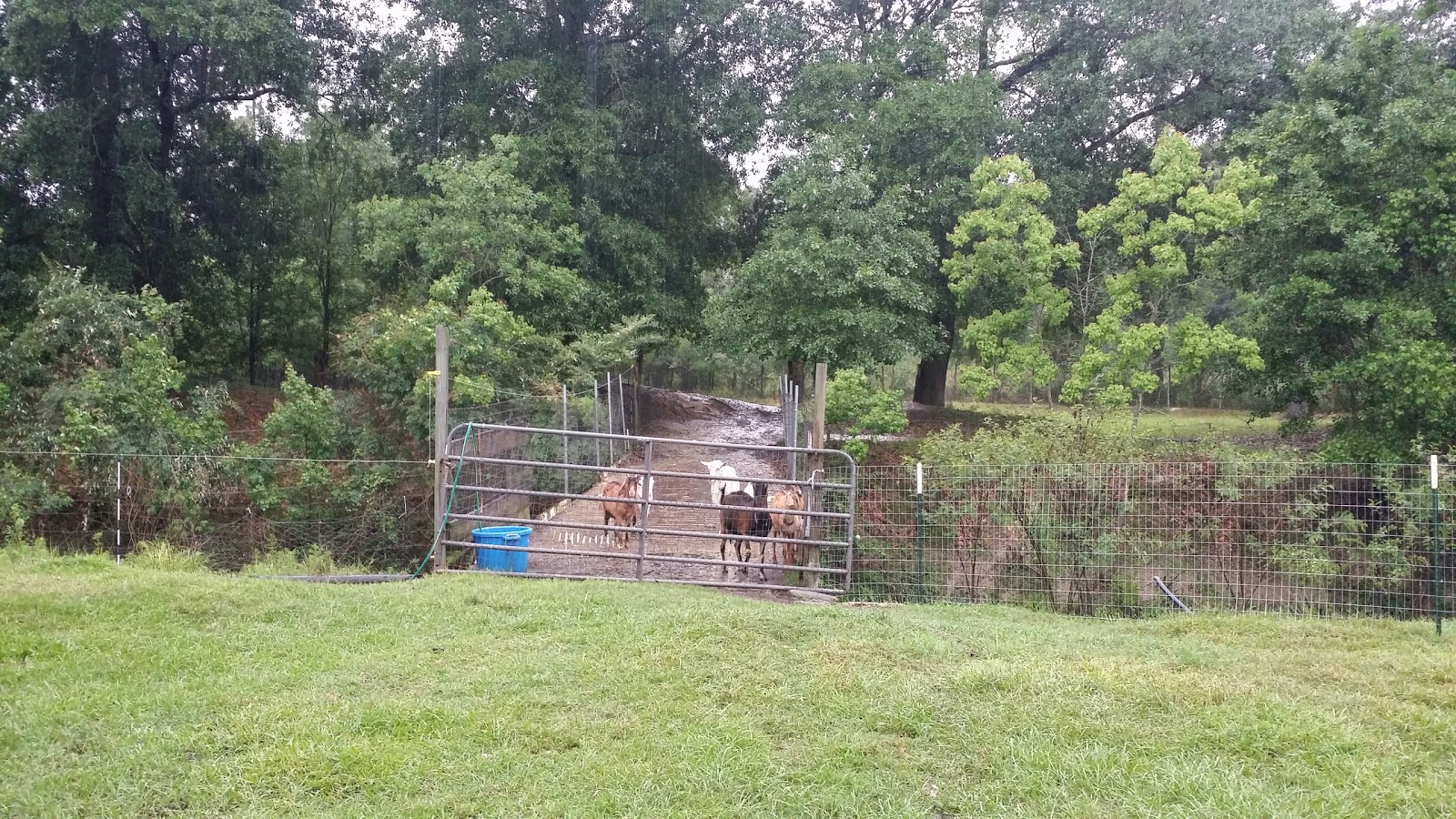 Finally I could go and let the ladies get in out of the storm. I unchained the gate to the most sullen, ungrateful bunch of livestock you can imagine, and the wet goats made their way to shelter at top speed. It was then that I realized that Eve's young daughter Turnip was not with this group. I also noticed that Francesca and Lucia were absent. Having seen them pull this trick once before, I crossed the bridge and sure enough, all three girls were hidden and quite dry under the bridge. I called to her and Turnip came right to me. I sent her back across the bridge to her mother and started to head that way myself when Francesca started calling her fool head off.

She was calling so loud and sounded so upset, I was sure she was somehow stuck under that bridge. I crawled back down the embankment to find that she was her sister were perfectly fine, just upset that they couldn't come with me AND stay out of the rain at the same time. Such is the life of these poor abused animals around here. 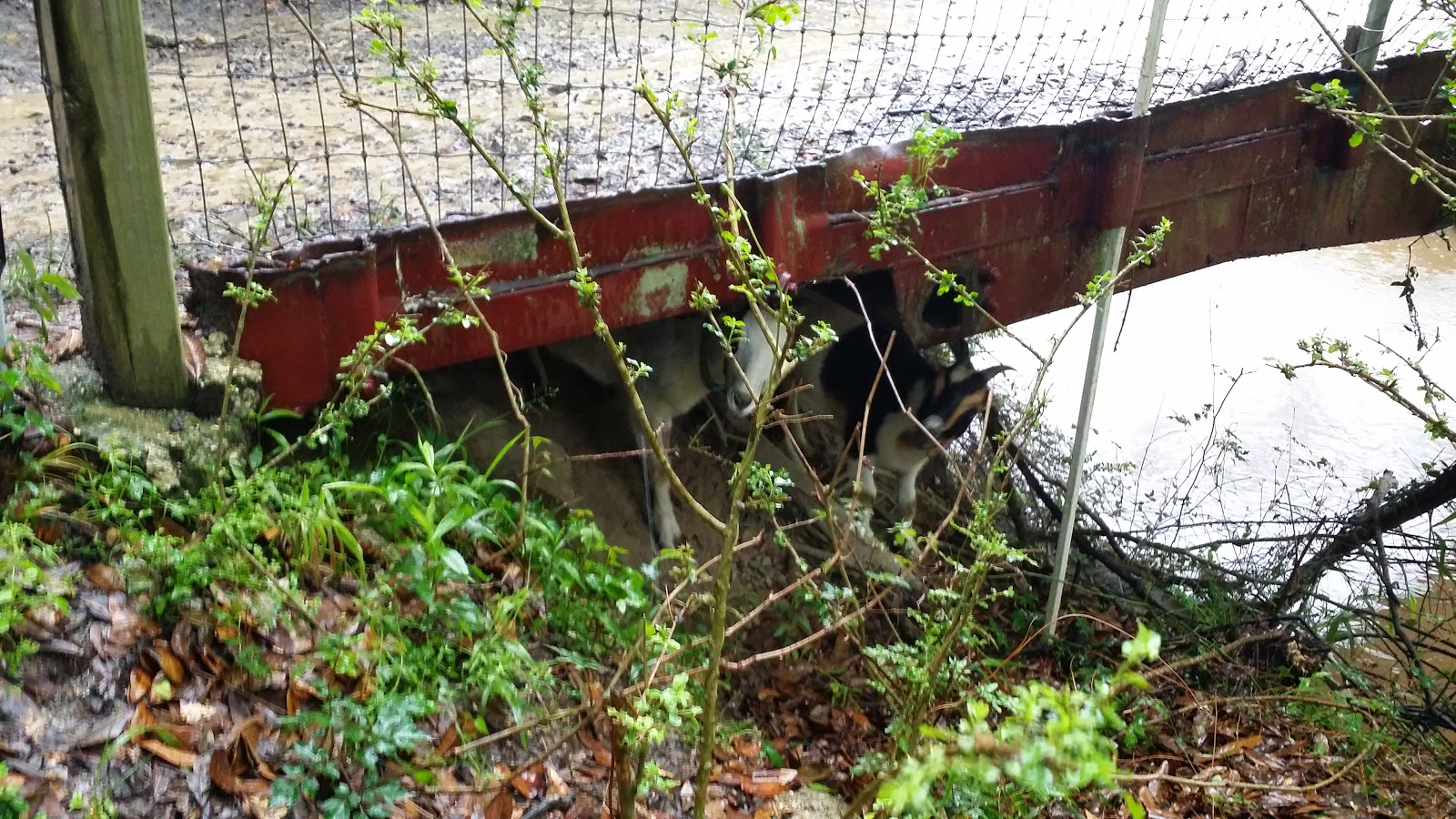 She was making such a racket that I was afraid she'd upset the neighbors so I pulled both girls out from under the bridge and the three of us and little Turnip finally made our way across the pasture to shelter. Franny and Lucie went into the buck pen with the boy and the rest of the ladies all piled into the milk room where everyone was enjoying cover from the weather and a snack of hay. 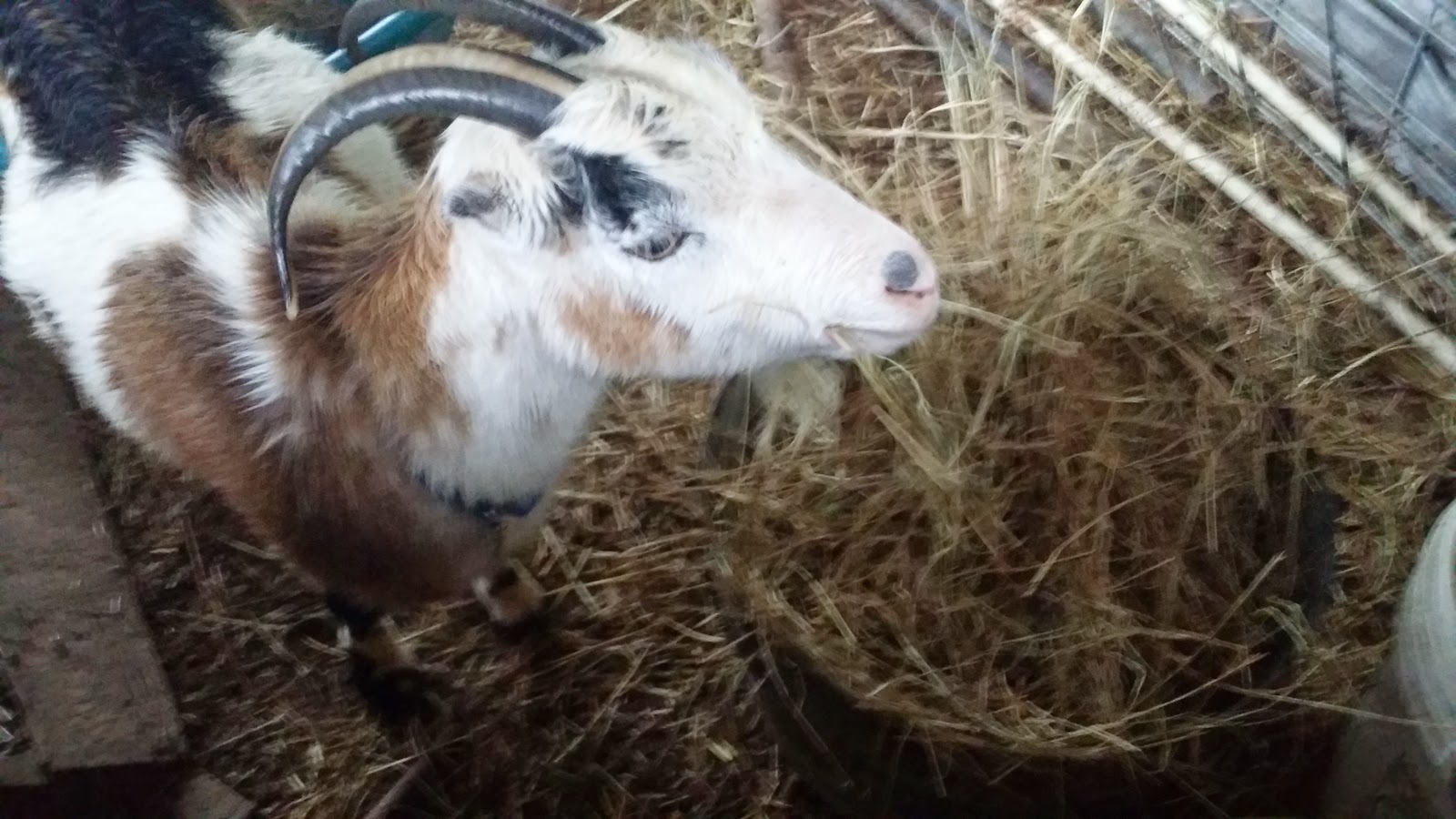 Gwen had made her way around to the other side of the building where the princess has her private suite away from the bigger goats who tend to bully her. I looked over the short wall to her area and realized that she was the only one without access to hay. Already feeling guilty for leaving everyone out in the rain, I sighed one more big sigh and dutifully grabbed a bucket, walked back to where the sheep were hanging out with the round bale, filled that bucket with fresh, dry hay, and walked back to make an offering to the sodden princess who gracefully accepted my peace offering.

Finally, I could get back to the house. I was now as wet as the goats and covered in mud from all my trudging back and forth. When I opened the door, I smelled a smell I know very well. Cooked milk. My little adventure had taken a lot longer than I had planned. My milk which was only supposed to reach a temperature of 185 was happily boiling away in the pot. Thankfully it hadn't boiled over or burned. I turned off the heat and added a splash of vinegar. Hopefully the cheese will still be ok, but even if not, I'm sure that now that I've saved the ladies from melting in the storm they will happily give us plenty more milk it take its place.