Fencing off the creek 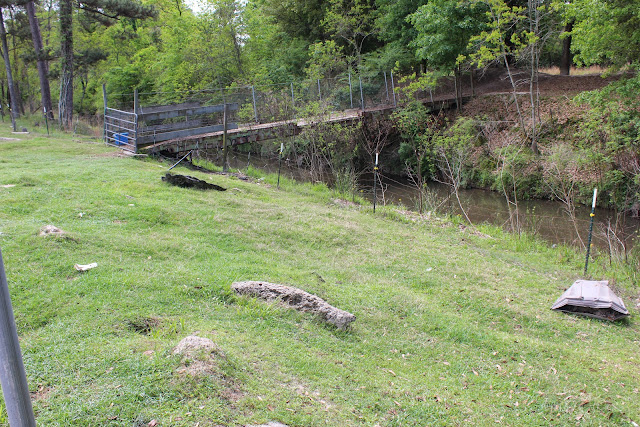 Sometimes it seems like having goats means being doomed to constantly putting up new and better fences. Our sweet twins Francesca and Lucia seem to be especially good at finding and exploiting the weak point in any fence we put up. As a result, the girls were making forays into the neighbor's yard, munching on his vegetable garden and nibbling his fruit trees. While our neighbor's love all the animals, especially the goats, there is a limit to their hospitality, understandably.

Our other problem was the ducks getting into the creek. We have been told that they were making their way up to the road and beyond. Not good. With goats going over and ducks going under, the old fencing we had up around the creek just wasn't doing the job. 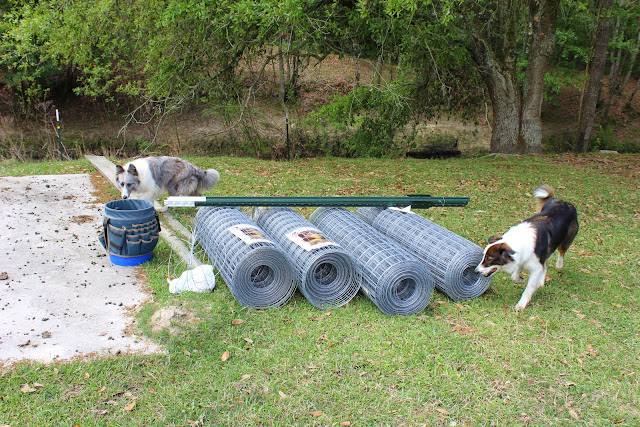 We decided to take down the old fencing and put up something that SHOULD hold in both the goats and the ducks, and hopefully keep out predators. Without a lot of funds for the project, we invested in several 4 foot tall rolls of welded wire and some 7 and 8 foot T-posts. The farm dogs inspected our purchases for quality. 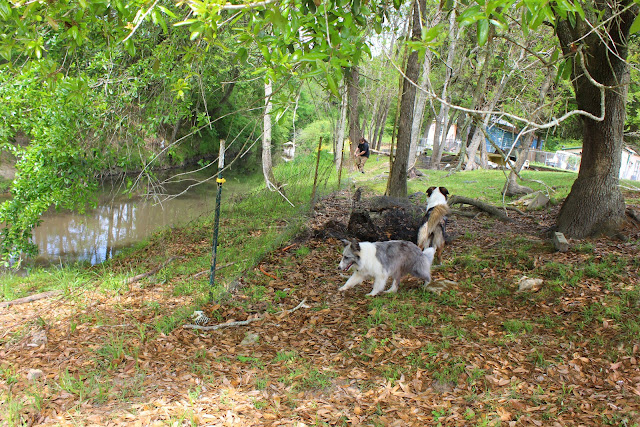 The first step was taking down the old fencing. Several bouts of heavy rain and flooding had buried the bottom of the fencing in deep layers of mud and dead leaves. 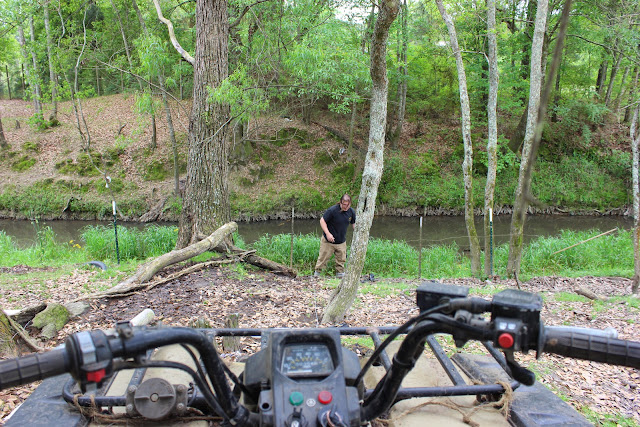 In some areas we actually had to use the winch on the front of the four wheeler to pull the old fencing out of the ground. 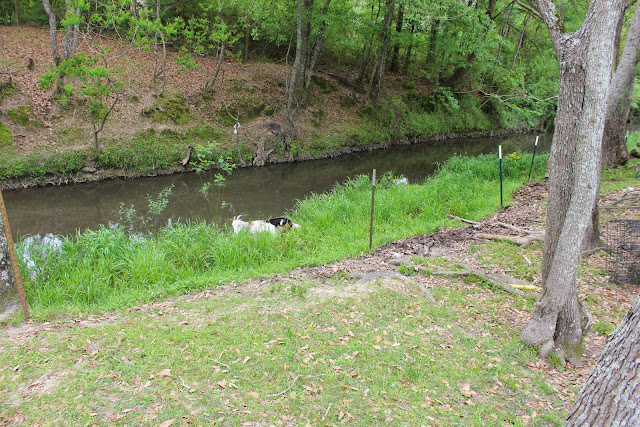 Once the fence was down, Gwen decided to take advantage of access to the previously blocked off area and fill her belly with some overgrown forage. She was a very happy goat. 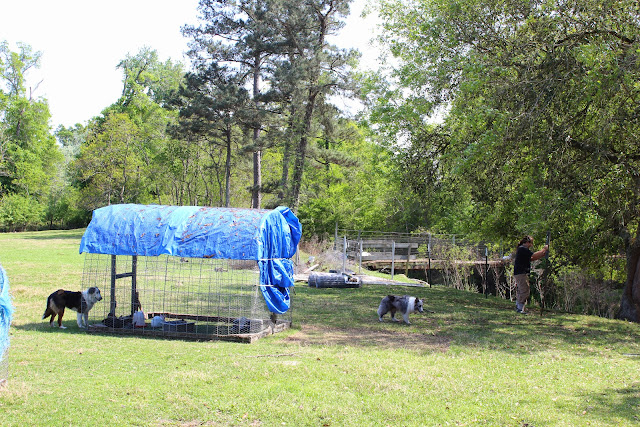 Since flooding was an issue, we decided to put up the new fence well above the flood line. Here Big Onion is driving in the new post while Luna supervises and Rialey has a chat with her bunnies.

While Big Onion was doing the manly job of driving in the posts, I decided to move one of the rolls of fencing into place near the bride so we could start securing it to the first post. Well, those rolls are heavier than they look. First, let me assure you that I am no wilting flower in the strength department. I can sling around 50lb feed sacks and wrestle full sized goats with the best of them, but for some reason those rolls were just a little more than I could handle.

Well, my motto is work smarter, not harder so I thought I'd do the smart thing and start rolling the fencing where it needed to go. I was happily walking along, kicking the roll ahead of me, not paying very close attention to the fact that me and that heavy roll were getting closer and closer to the embankment of the creek. Suddenly the fencing seemed to take on a life of its own and started rolling slowly then with alarmingly increasing speed diagonally down the bank of the creek. I started yelling, "no no No No NONONONONONO!!!" as if the damned roll was going to listen to me and stop its swift descent into the moving water below. Just as I was about to hurl myself forward and onto the roll to save it from a watery, muddy demise, one corner caught the edge of one of the fence posts we hadn't yet removed. The post turned the fencing just enough that it swung around sideways and stopped rolling long enough for me to grab hold of the post in one hand and the fencing in another. A couple seconds more and both me and fencing would have ended up a big soggy, muddy mess. 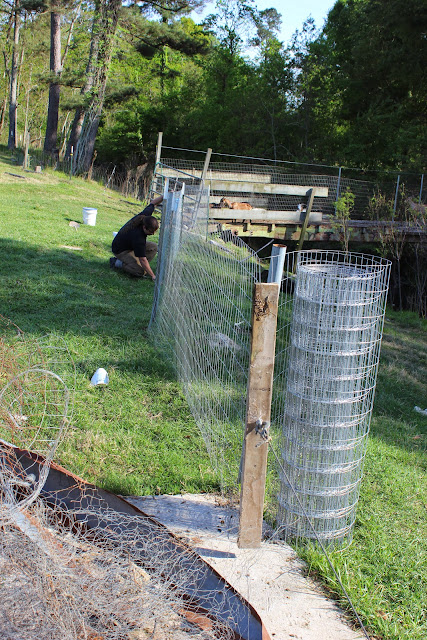 Once I had recovered from my ordeal, we started putting up the fencing. Once again the four wheeler was key in getting this job done. Big Onion built a fence puller using a 2x4 and some hardware. Once it was hooked up the winch on the bike, we were able to stretch some pretty tight fencing. Before we moved to the farm, I had no idea that tension is the key to good fencing. A loose fence is a saggy fence and nobody wants that (except maybe the goat who will happily pull it down and hop right over). 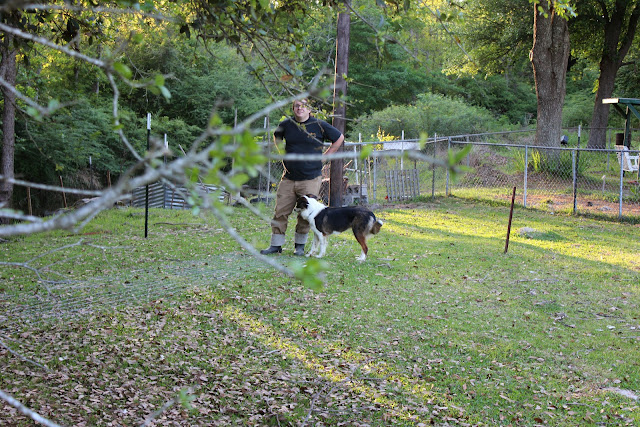 Big Onion and Rialey holding a length of unrolled fencing. 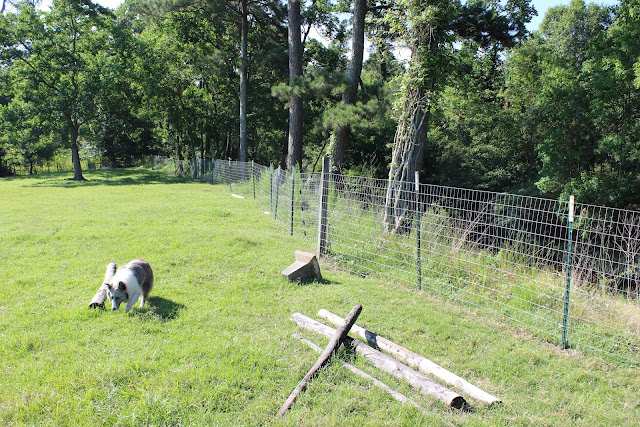 Once the fencing was in place and properly stretched, we secured it to the T-posts and the job was done! About halfway through the job, Big Onion finally broke down and purchased a clip bender and that little dojobby was well worth the cost. It saved us a lot of time and busted knuckles. 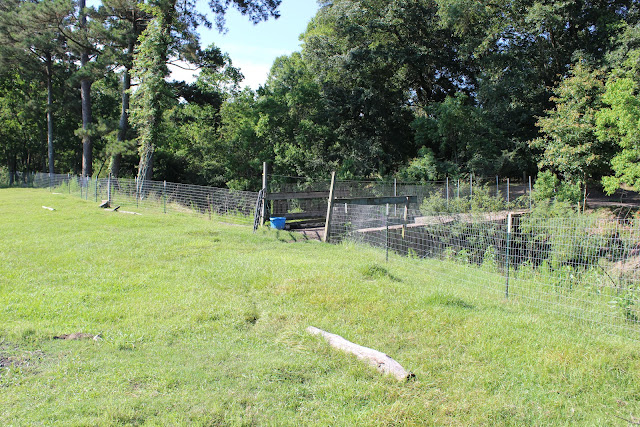 The final product. It's been several weeks and the goats have not managed to knock it down or figure a way through so we consider that a success. The next fencing project will be replacing the 3 strand electric line that's running in the second and third pastures with real fencing. Hopefully we can wait until the weather cools a bit before tackling the next area. Whew!