Every week we gather up the sheep to do a health check on everyone. We check the color of their mucus membranes and check for loose stool to see if they need a dose of dewormer. This has helped us reduce our lamb losses pretty dramatically and keep up with the health of our mommas.

This week we decided to do health checks in the evening rather than the morning so that meant gathering the flock from the back pasture. I sent Rialey out to move the sheep up and after a couple of false starts, she got the entire flock moving in the right direction at a moderate speed. 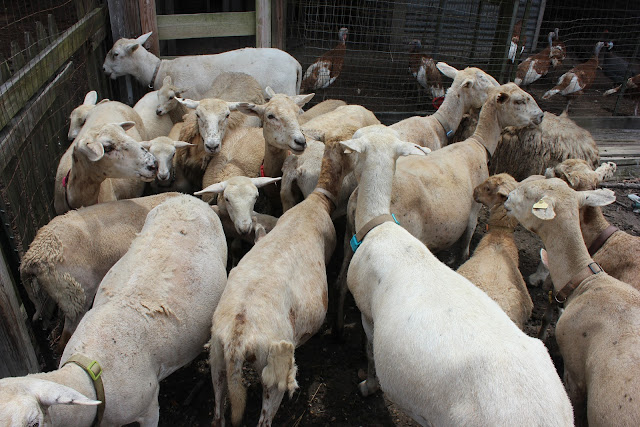 Once we'd moved them up through the second pasture and over the bridge, Luna and Big Onion took over and herded the group unto the alleyway behind the poultry pens that we use as a holding area while doing our checks. 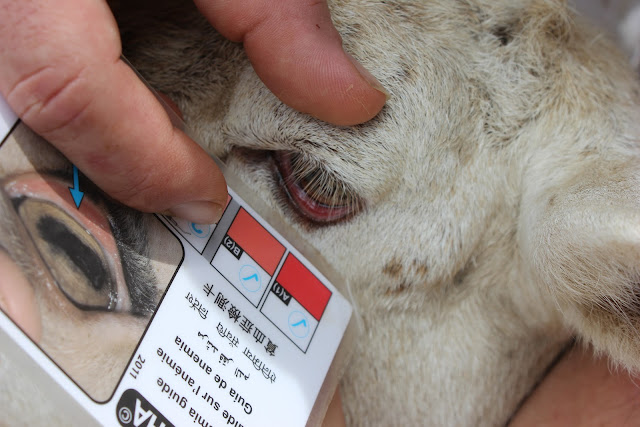 We gathered supplies, and quickly went to work. We were trucking along, me taking notes and Big Onion comparing mucus membrane color to a FAMCHA card when we realized we were one sheep short. Little Crabbe was missing.

Since we have been at this sheep rearing thing for a few years now, it has become pretty easy to tell which lambs are going to thrive and which lambs will mostly likely succumb to parasites. Crabbe was puny from the start. It seems like every week we were having to pump him full of dewormer and B vitamins, probiotics and iron shots. All our efforts seem to be barely maintaining him. Finding him missing from the group both Big Onion and I knew there was about a 50/50 chance that we'd find him alive.

As I was headed out to begin the search, Crabbe's mother, Apple, started calling. In the distance, we heard the lamb answer back. At least he was alive! When I came around the corner, I could see him there on the bridge at the gate. This would be a simple matter of opening the gate and letting the little guy run to join the group...or so I thought.

I dropped Rialey in a down stay in the tall grass and walked slowly and quietly to the gate. Unfortunately, Crabbe is the spookiest of our lambs so despite my best efforts not to scare him, he took off the minute he caught sight of me. I sighed and called Rialey to my side.

We crossed the bridge and before I could send Rialey around, the little guy took off! Rialey was after him like a flash. I was hoping he would just lay down as young and unhealthy sheep are want to do when stressed, but instead he headed down the fence line toward the opening to the creek. Rialey was hot on his heels! I was still hoping she would get him turned around when both dog and sheep disappeared from my view down the creek bank. I broke into a run, loudly calling Rialey off, but it was too late. She'd caught up with the lamb, and he had finally done his stupid lamb move of laying down to play dead. Only playing dead doesn't work so well on a steep incline. I caught up just in time to see the little guy do a perfect barrel roll and go head over hooves down the embankment and splash right into the creek!

Luckily, we've been short on rain lately, and right when I was certain he would go under and drown, Crabbe popped right back up and looked back at me in complete shock! I don't think he was expecting that to happen! 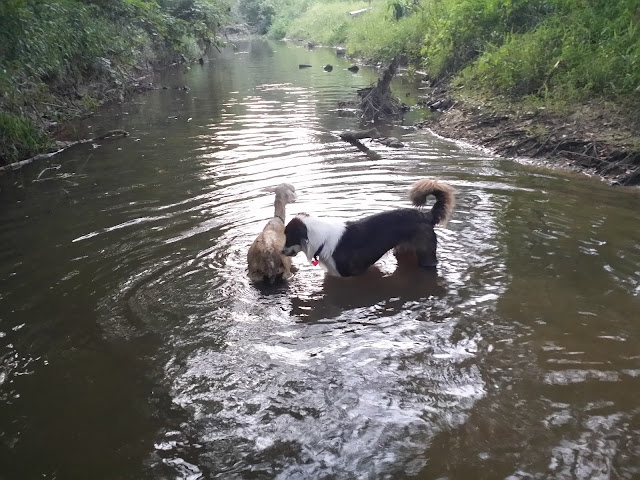 Rialey was happy to follow the errant lamb down into the water and did her best to try and get him back to me. She tried herding him. She tried barking at him. She even tried grabbing and dragging him back to shore to no avail. Crabbe just stood there not moving. Finally, he decided to lay down and die again because sheep are really just that dumb and down he went under the water.

At that point there was nothing else for me to do, but to slog down into the boot topping creek and retrieve the stupid creature. By the time I had crawled/fallen down the steep embankment and slashed into the water, he had once again popped back up, only this time he started heading away from Rialey and me and in the direction of the neighbor's. Luckily Rialey was on him again. She grabbed a mouthful of wool and held him there until I could slog my way over to the two and retrieve the soggy little guy.

I gathered up the dripping creature, climbed back up the other side of the creek bank, and handed him over the fence to Big Onion. Crabbe was none the worse for his little adventure and with the heat index topping three figures, there was no fear of him catching a chill. 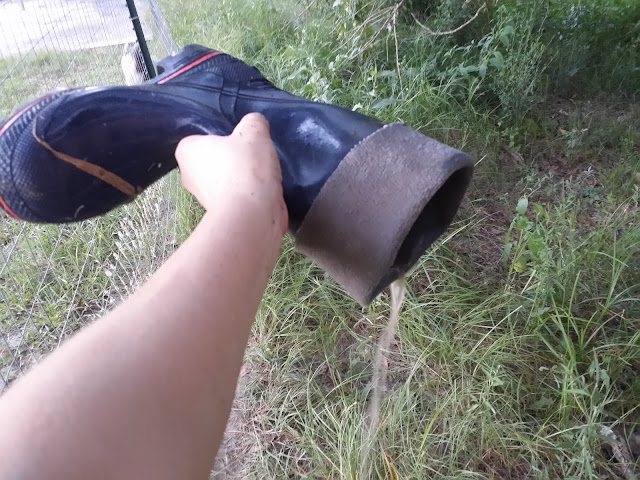 For my part, I emptied out my boots, wrung out my socks, and finished the evening chores with soggy feet.
Posted by Kaela at 1:26 PM