Today, mom and I carved out a small chunk of our crazy schedule to go get Elliot's first Santa picture. Because I'm a bit of a crazy person, I opted to sit in the picture with him instead of letting Santa with his touching every kid with every god knows what kind of disease gloves hold my baby. Look, I'm all for germs and early exposure and working that immune system, but not with my 4 month old and not right now. We don't even have a good pediatrician picked out in Greensboro yet.

Anywho, here's our Santa pic. We tried to get a smile out of the little guy, but did not succeed. His smiles are frequent and easy but fleeting so by the time the photographer got back to her camera, El was back to his default face. Oh well, he's still his adorable self.

The day was a bit of a kerfuffle. Everything that could...I don't want to say go wrong exactly, but everything we tried to do ended up being more complicated than usual. El managed to fountain my mother with pee THREE times during one diaper change, the last of which called for a costume change on his part. While we were out, he pooped twice. We arrived to the Santa place while they were out to lunch, and mom didn't inform me until halfway through the day that she had an engagement that evening. So by the time we got half of our to do list done, we had to run home. I nursed a very hungry Elliot then ran out and did chores in about 10 minutes flat. Afterward while mom and her husband did their thing, Elliot, Rialey and I finished our errands for the day.

My poor baby. By the time we were finally heading home for the last time, he had had it and started crying in the car. I pulled over twice to try and soothe him to no avail. I even tried driving (carefully down back roads) while dangling my cell above his head playing an app that has shiny balls rattling around. Nothing helped, but I did get pretty good at fishing out a dropped pacifier and shoving it back into his mouth blind and backwards though. 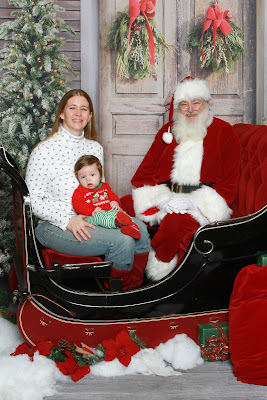 Email ThisBlogThis!Share to TwitterShare to FacebookShare to Pinterest
Labels: elliot, me, santa, xmas