Sorry it has been so long since my last post, but we have been a little busy in the last week.... 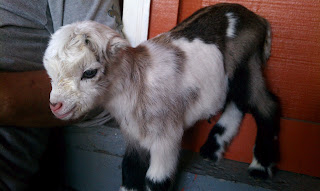 Josie FINALLY gave birth to a single little girl. We are calling her Gwendolyn. She was born at about 4am on the 26th. Unfortunately, despite all our efforts, we missed her actual birth. Josie went from very little indication to baby goat in the space of a couple hours. By the time we found Gwen, she was partially dried off and just barely up on her feet. We are keeping our fingers crossed that she didn't have time to nurse and potentially catch CAE from her momma before we got out there.

The first couple days were very touch and go for this little one. She had aspirated some kind of fluid, either during her birth or when we tried giving her a bottle for the first time.  She was having a lot of trouble latching on to the bottle. We were having to pry her mouth open to get the bottle in. Then she would just barely suckle. 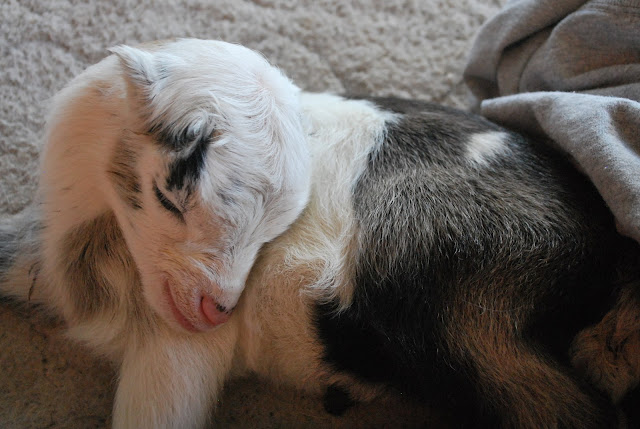 By day two she was very lethargic, coughing a lot. Her mouth was full of mucus. She would not track and follow us when we called. She wasn't even pooping much at all. All she wanted to do was lay in her crate. I had taken her to work with me that day so I had my boss give her a quick look, and she was not very optimistic about the little girl's chances. We gave her a homeopathic and a little later an antibiotic and vitamin B shot.

Since then there is no stopping this little gal. She's already gained over a pound since she was born. She's drinking every drop we give her. She's running around the house like a fool driving all the other animals crazy. She seems to take particular pleasure in bothering poor Ajah who is closest to her size by chewing on her fur and trying to jump on her back at every opportunity. Her only problem is a little nasal congestion which gives us the opportunity to burst into choruses of "Snot Rockets in Flight" on a regular basis.

Here's a couple videos of her tearing around the front yard....