So we thought Thea's due date was some time around Wednesday of last week. Days and days and days of checking Josie and then Thea every 2-3 hour around the clock were starting to take their toll on Big Onion and me. We took turns on the night shifts, napping on the couch between trudging out to check on the girls and getting very little else done around the house and farm. The added stress of feeding, wrangling, and cleaning up after three rambunctious bucklings wasn't helping much either.

Night before last I was on duty. Every time I checked on her, Thea was looking closer and closer to going into labor. Her vulva was swelling, and her udder was finally starting to fill up. It was about 11am. I had gone out to get a (late) start on morning chores while Big Onion was making us both some much needed coffee and breakfast. I came around the corner by the turkey pens to find Thea laid out on her side and already pushing for all she was worth!


I'll admit I had a moment of dumb struck panic. I really wasn't expecting her to advance this quickly, and I had nothing with me. No gloves, no towels, not even a feed bag to catch the baby so it didn't get covered in dirt. I wrestled the phone from my pocket, and with unsteady fingers I dialed for Big Onion.

About that time, Thea gave a mighty push and I saw just the glimmer of the fluid sac, "No, you don't understand! She is pushing! Get out here NOW!!" and I hung up the phone.

I knelt down in the dirt to try and help Thea. I have no idea how long she'd been pushing, but that baby was coming weather I was ready or not! I still had my phone in hand so I decided to try and video the birth.

Thea pushed again and I was able to break the sac and could see a little white foot through all the liquid. I thought, 'Oh good, a normal presentation.' When she pushed again and a nose peaked out, I realized the feet were tucked farther back than they should be. I grabbed one foot and was able to slowly work it then the other foot forward while momma pushed for all she was worth. In looking back at the video, I realize that I should probably have pushed the head back then worked the legs forward, but I was far from sterile at that point. I really didn't want to cause Thea an infection by reaching in any farther than I had to. One or two more hard pushes and the baby was out!

The video of the whole thing is posted here.

It was about that time that Big Onion finally made his way out to us. I will never forget the panicked look on his face when he came into the goat yard with arms loaded with lube, gloves, about 6 towels, the camera, the video camera, and both of my homepathic remedy kits. He took one look at me holding a slimy, writhing mass of ears and limbs and dropped everything right there on the ground.

He scooped up a towel from the pile and made his way over to me in the pen where I plopped the whole mess into his arms. It was then that I finally thought to check the sex. A girl, finally! He bundled her off to the milk room before Thea could get a good look. 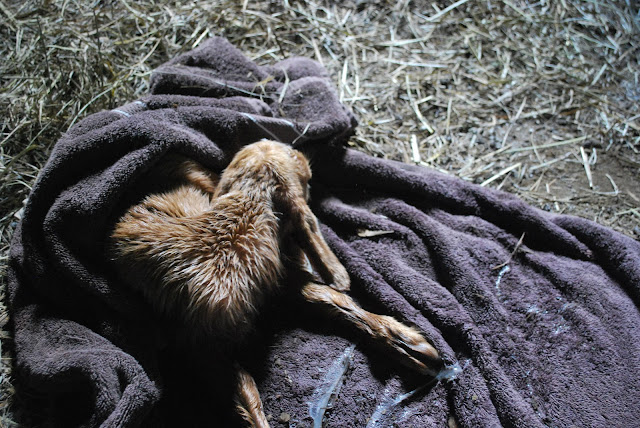 I stayed with momma and hoped another kid would follow. Thea decided I was the next best thing to a kid and started licking me from head to toe. She even spent a time licking my glasses and my nose presumably to clear my airway. Thanks Thea. 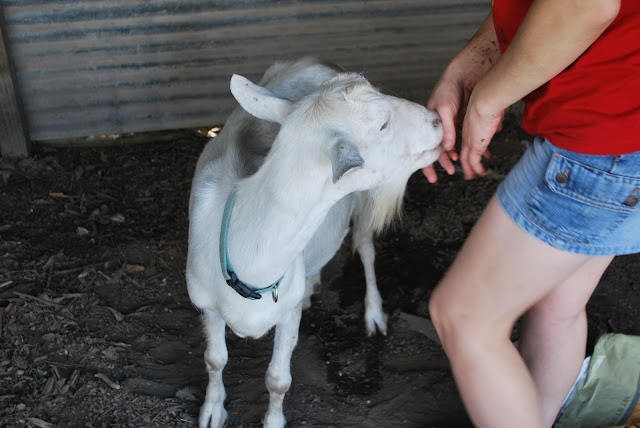 Eventually we figured that Thea was only going to have the one kid so I came back in the house in time to see Big Onion give the baby doeling her first bottle. 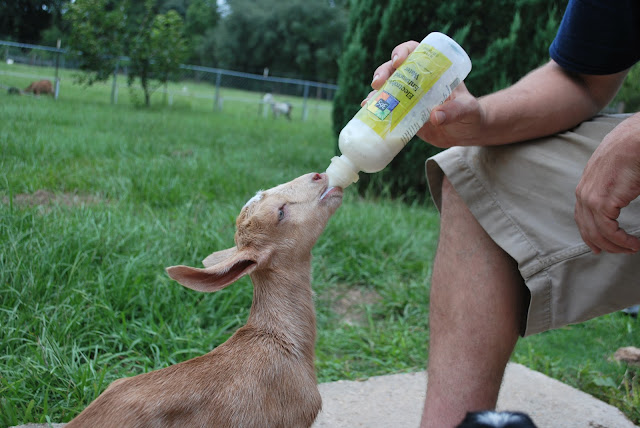 Now at this point, we have raised a good number of bottle babies here on the farm and I can tell you that I have never, ever seen a newborn take to the bottle faster than this little girl. She gets that from her mother. Thea just lives for her "num nums." 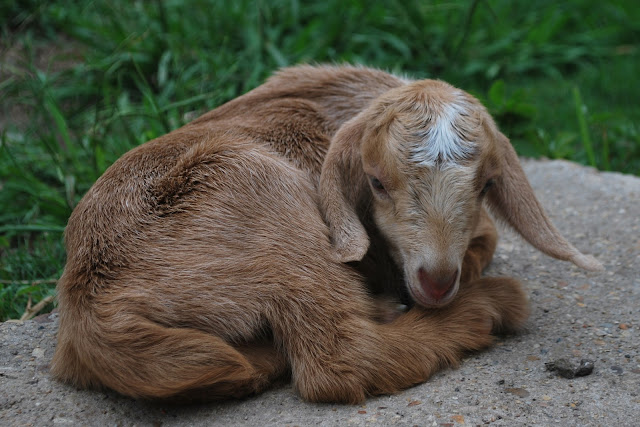 This was my first time getting a good look at the kid. She is light tan, almost blonde in places with a sweet little white star on the top of her head. She was 5.8lbs at birth, a full pound heavier than the triplets, but would you get a load of those ears?! 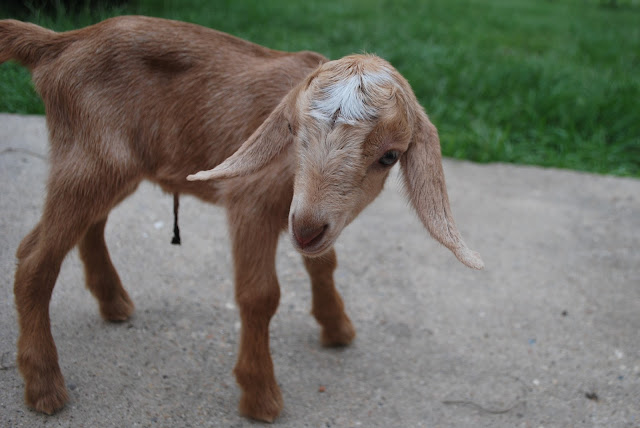 One of the possible outcomes of crossing the Nubian's dropped ears and the Saanen's small, erect ones is something people refer to as "airplane ears." Well, it looks like this little girl is going to have ears like the flying nun! 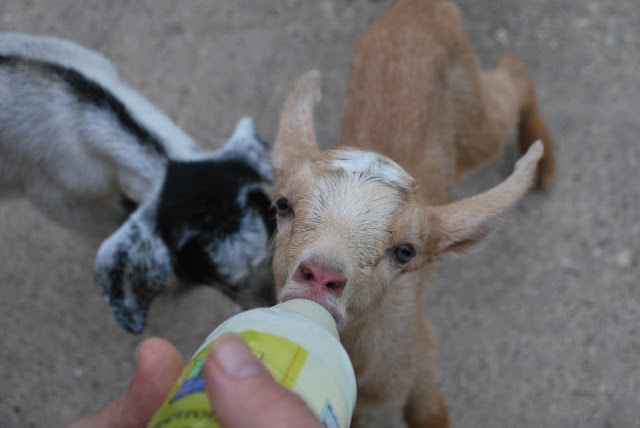 That's why we've decided to call her Amelia, or as Big Onion likes to say Amelia EARhart. 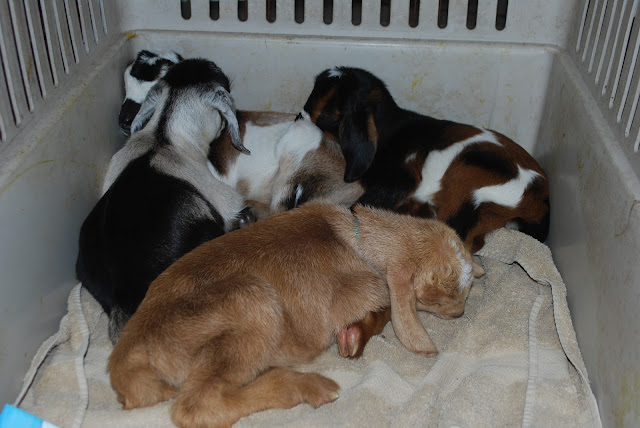 Here she is snuggled with her half brothers. Since Thea had only one kid, I think we have decided to keep one of the three tenors to raise along with Amelia. Right now the front runner is Luciano (top right). He's by far the sweetest of the three, and we have have seen him more than once snuggling with his little sister while the other two are off doing their own thing.
Posted by Kaela at 5:41 PM