Since Josie started showing signs of labor Monday afternoon, I had been out checking on her every couple hours around the clock. Yesterday afternoon when the sky turned dark and it started to pour down rain, I knew I'd better go out and check on the girl. Somehow it seemed only right that Josie would  choose the nastiest possible weather to kid. 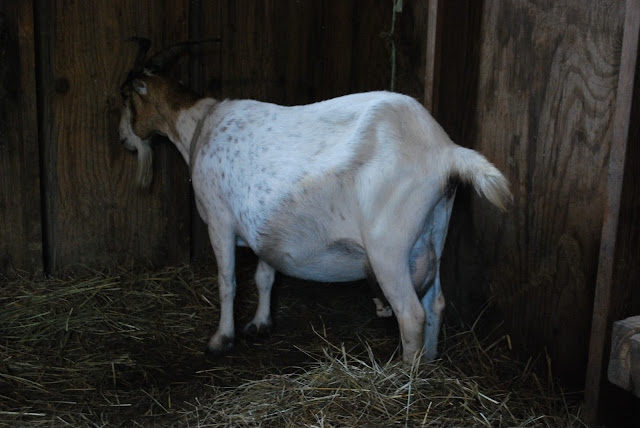 I came out to find her just starting heavy labor. I watched the contractions come and go. My goat momma would paw at the ground and get up and lay down over and over again. I suddenly realized I really wasn't as prepared for kids as I thought I was and found myself running back and forth to the house in the rain with a rubbermade bin lid held over my head to grab my camera, then the memory card, then my boxes of homeopathics. I also had to set up a crate in the house to hold the babies until Josie was done kidding. 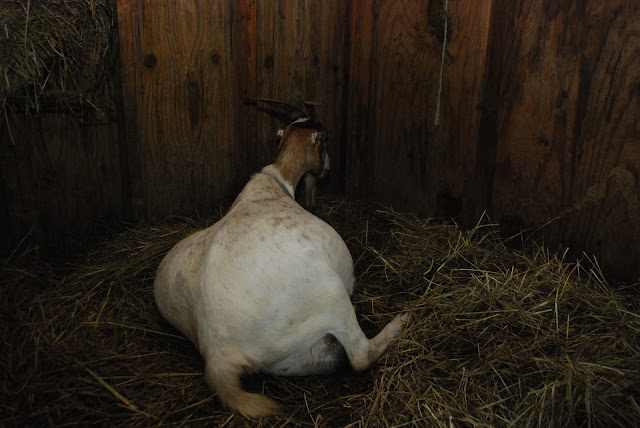 Finally Josie's water broke, and she settled down to push. I took note of the time. Everything I had read said that the babies should be out within one hour of pushing. Josie pushed and pushed but nothing seemed to be happening. 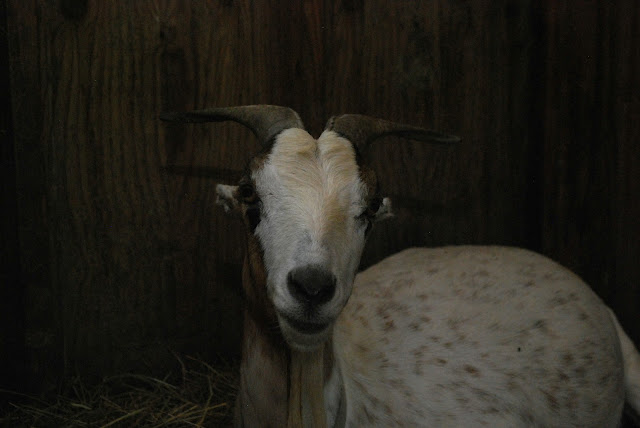 Poor Josie was exhausted. She would push for a while then rest her head on her front leg and seem to nap for a few minutes. Keep in mind that the poor girl was in what looked like the beginning stages of labor for over 24 hours at that point. When the hour passed and still no kids, I plucked up my courage for what I knew I had to do. 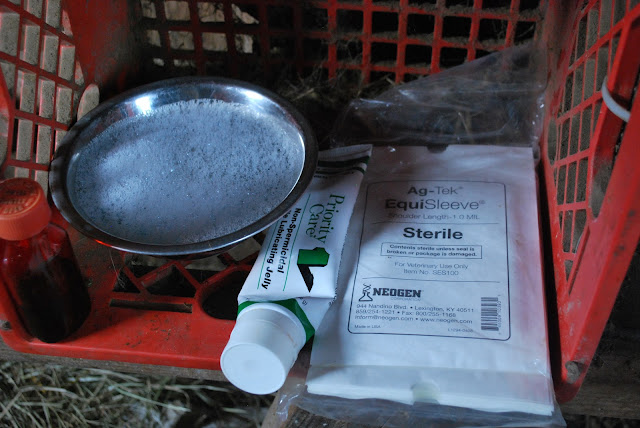 I had surgical scrub, lube, and sterile gloves on hand for just this situation. Actually, I set up my birthing kit last year before Gwen showed up. Thankfully, this is the first time I've had to put it to use. I scrubbed up myself and momma's rear end while trying to keep my nerves from getting the best of me. Let me tell you, it's not easy getting on shoulder length sterile gloves with wet and shaking hands.

I tied Josie's collar just in case she tried to make a run for it since that girl doesn't like anyone near her rear end even in the best of times. As I started feeling around, Josie started yelling and pushing like crazy. I should mention that all the time I was sitting and waiting, Gwen and Thea were in the room keeping us company. When Josie started yelling I looked up to see both girls were gone. Those two had run for the hills!

Really quickly I felt a little something hard just inside the birth canal. Then Josie pushed and a nose peaked out and went back again. Normally, goat kids are born front feet first then the head. They actually dive out of their mothers and into the world. This little guy didn't get the memo. I reached in, found one front leg tucked back and pulled it forward. Before I could do the same with the second leg, Josie gave a giant push and out that baby popped!

I had a towel ready so I wrapped the little guy up and hightailed it out of the room before Josie could get a good look at what came out of her rear end. I had to stop halfway to the house the clear the little guy's nostrils. I gave him a quick and gentle swing back and forth by the back legs in the middle of the pasture before bundling him up and running the rest of the way to the house. What my neighbors must think! 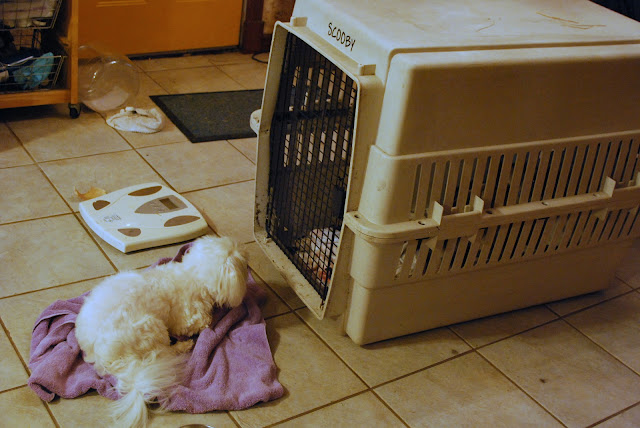 I had the big dog crate set up in the kitchen and ready for the little one. TeeCee kept watch on the first kid who turned out to be a boy while I ran back out to see what was happening with Josie.

By the time I got out there, she was already pushing out the second kid. I broke the fluid sac with my fingers and helped her deliver the second baby. Again, I bundled the little guy up and ran for the house. Again, I had to stop midway to clear out nostril and dry off the thick gloppy goop that was coating the little guy. Yep, another boy.

I got him situated and ran back out to Josie again who surprisingly was pushing out yet another kid! I helped deliver this little one - ANOTHER boy. I wrapped him up and hightailed it for a third time back up to the house. Stopping halfway I realized this little guy was having a lot more trouble clearing his airway. I tried swinging and wiping with the towel, but he still seemed to be gasping for air. I had a flash back to when Gwen was just one day old and so sick with pneumonia that I was sure we would lose her. I was not going to have that happen again so I took that tiny little nose in my mouth and sucked out whatever was clogging the works. The little guy let out tiny "Whhaaa!" and I got him tucked away in the house with his two brothers asap.

I turned around and hoofed it back out to Josie, just certain that somewhere in there was a perfect, pretty little girl. She actually had a bubble of something coming out when I got back to her, but it turned out just to be part of the afterbirth. Shucks! 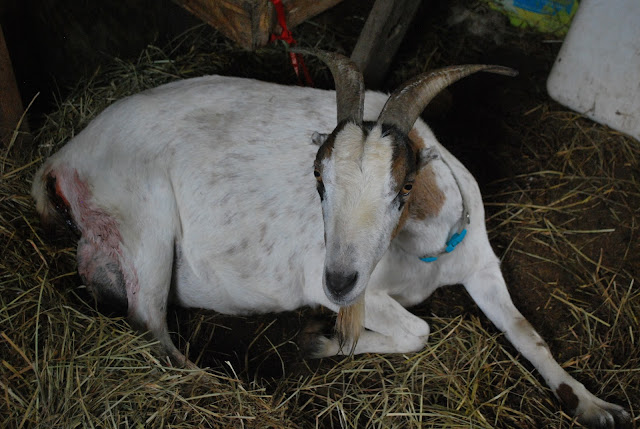 Unfortunately, Josie's work for the day wasn't quite done. I needed to milk out her colostrum to give to the trio. I coaxed her onto the milk stand, and she was very happy to indulge in some grain while I milked out the thick, yellow, sticky liquid.

Since she is CAE+, the colostrum had to be heat treated in order for it to be safe for the kids. This meant getting it up to a temperature between 133 and 140 degrees and holding it there for one hour. Our food dehydrator worked great for this, but the boys were not pleased with having to wait so long for their first meal. I got the inspiration for their names by their high-pitched protestations of starvation while we all anxiously waited for the colostrum to be safe to drink.

Just like last year, Josie's udder has congested on us. This is a very common problem with CAE+ goats. It just means we will be out there milking her every few hours and massaging her udder until our hands give out. Unlike last year, when I sat in that milk room and cried along with her for the loss of her little girl, Josie doesn't seem to know that her kids are missing. She's not called out for them once. She was happily grazing the pasture today and just as easily jumped on the stand to be milked several times throughout the day. I guess the trick is never to let momma even get a look at the kids.

OK, ok, enough of my yapping. On to the baby pictures!


Introducing our very own Three Tenors: 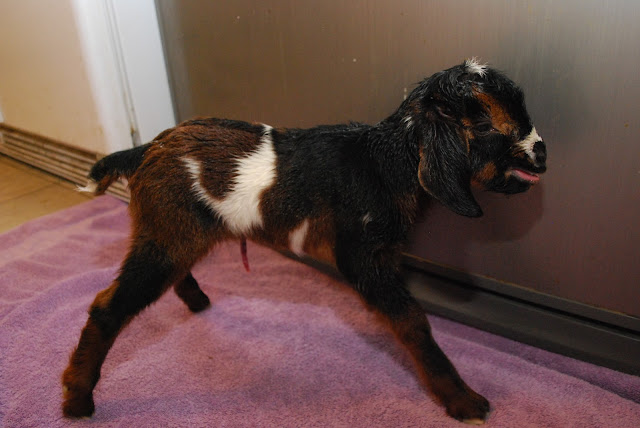 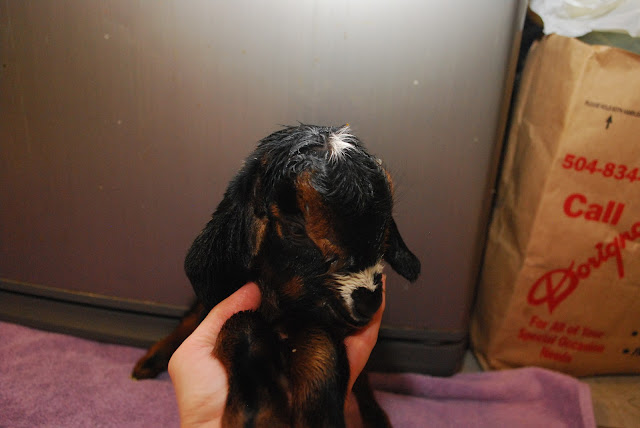 This little guy reminds me the most of his father, Rocky. He's got the nubian ears and head shape. Unlike Rocky, he's got some really striking splashes of white and a deep chocolate brown on his read legs. He also acts the most like a buck. He's already snorting and doing the silly buck head shake. 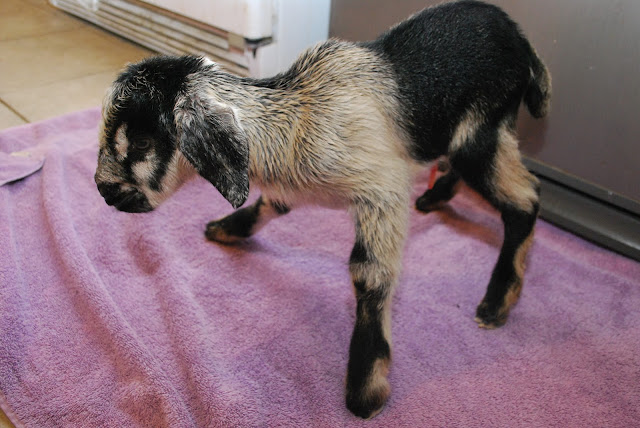 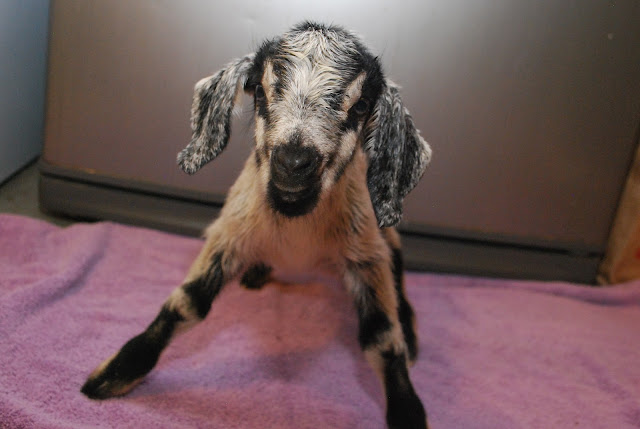 He's got the least Nubian head shape. I just love his little ears. They almost look brindled. He also took the longest to latch onto the bottle, but today all three are drinking like pros. 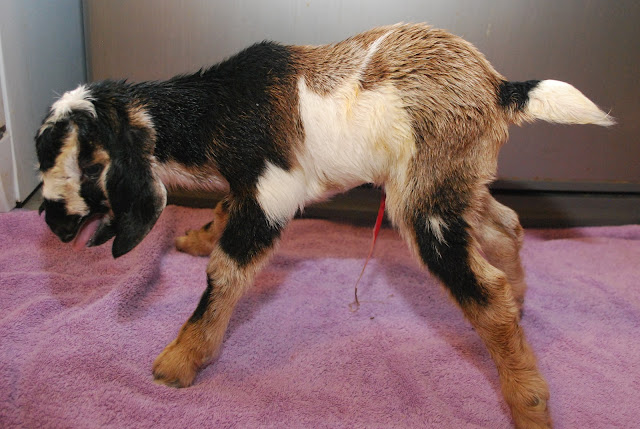 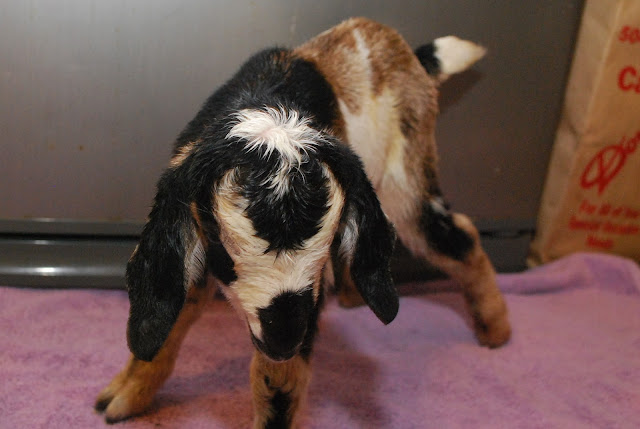 This little guy almost has Gwen's marking in reverse.

At one day old are already cracking us up with their uncoordinated antics. All three boys took to the bottle very quickly. I learned from my mistakes with Gwen last year and got them sucking on my fingers before slipping the nipple into their mouth. They have taken over the kitchen and seem to take great pleasure in pooping and peeing everywhere but on the pee pads and towels. Oh well, that's baby goat rearing for ya!