It's time for the goats to get their hooves trimmed again so I thought I'd share a few pictures and the basics of how we care for hooves around here. I should start off by saying that I am far from a pro at this. I learned to trim hooves from videos and pictures with a little help from our wonderful local large animal vet. You'll see that each of our goats, the motley crew that the are, present a different challenge.

Since most of the goats are used to getting up on the milk stand, that is where I decided to do the trimming. I like to give them a bucket with a mix of feed, course alfalfa hay, and even some alfalfa cubes just to keep them occupied and unconcerned about what's happening to their feet. 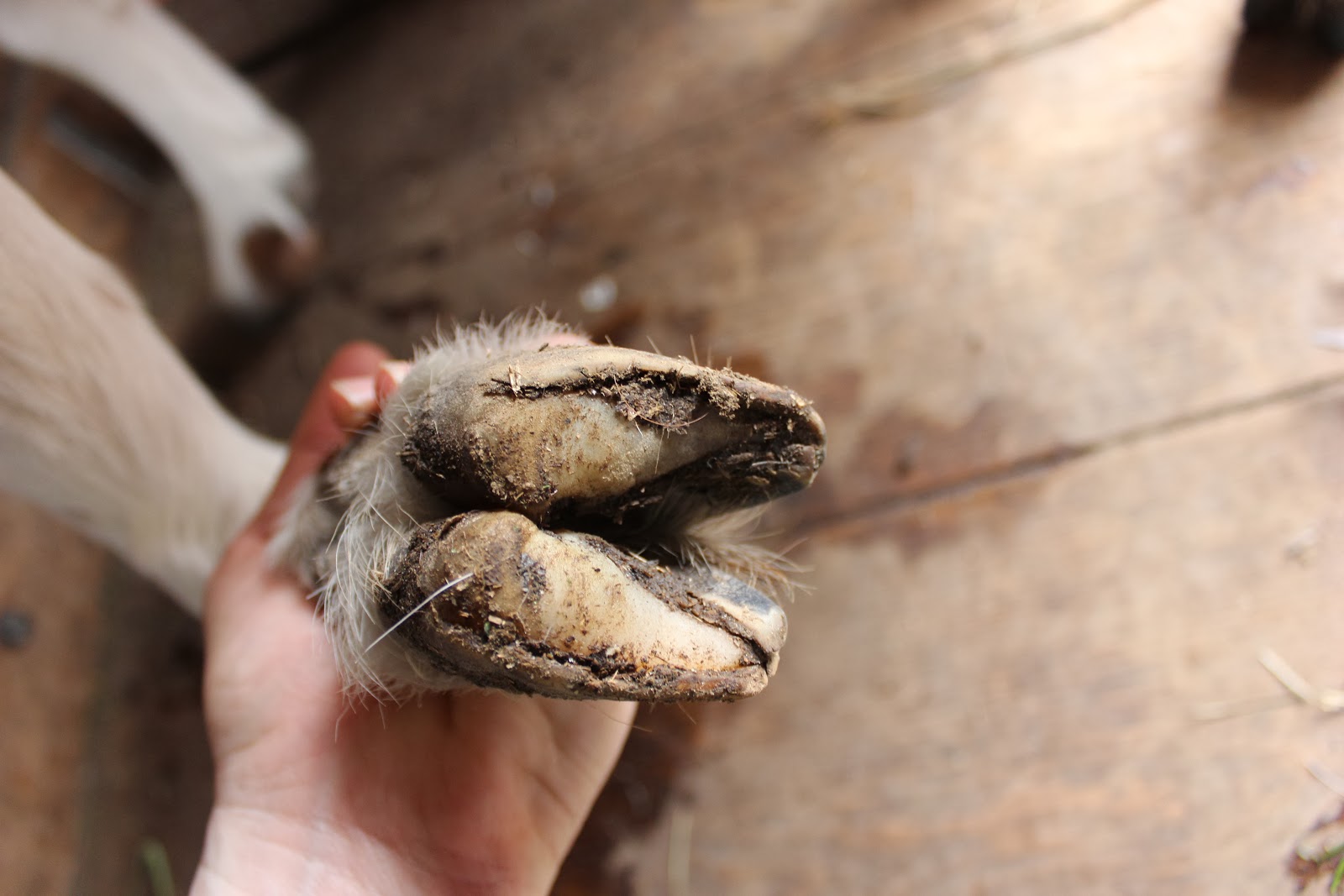 This is one of Josie's front feet. As you can see, the hooves are not too overgrown. The first step is to clean the hoof with a stiff bristle brush. 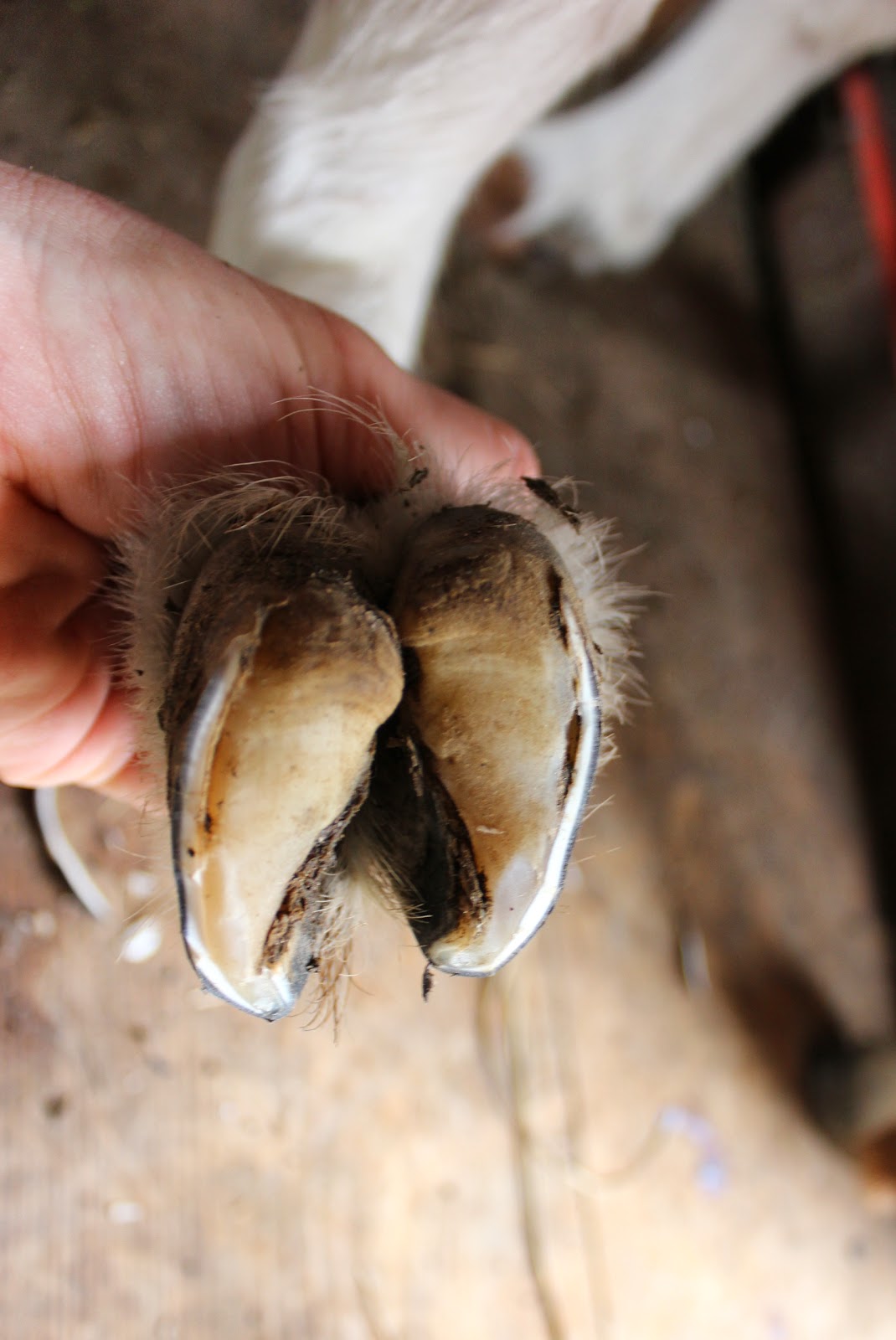 Then I just trim the excess hoof around the edges. You can see the white lines around the outside of the foot where the hoof wall has been trimmed. After I took this pic, I did a little more trimming to cut back those slight pockets on the right side of the picture.

I don't think Josie's feet were ever trimmed before we got her. She used to get these deep craters in the pads of her hooves. I'm glad to see that with lots of good care, her hooves are looking much more healthy. 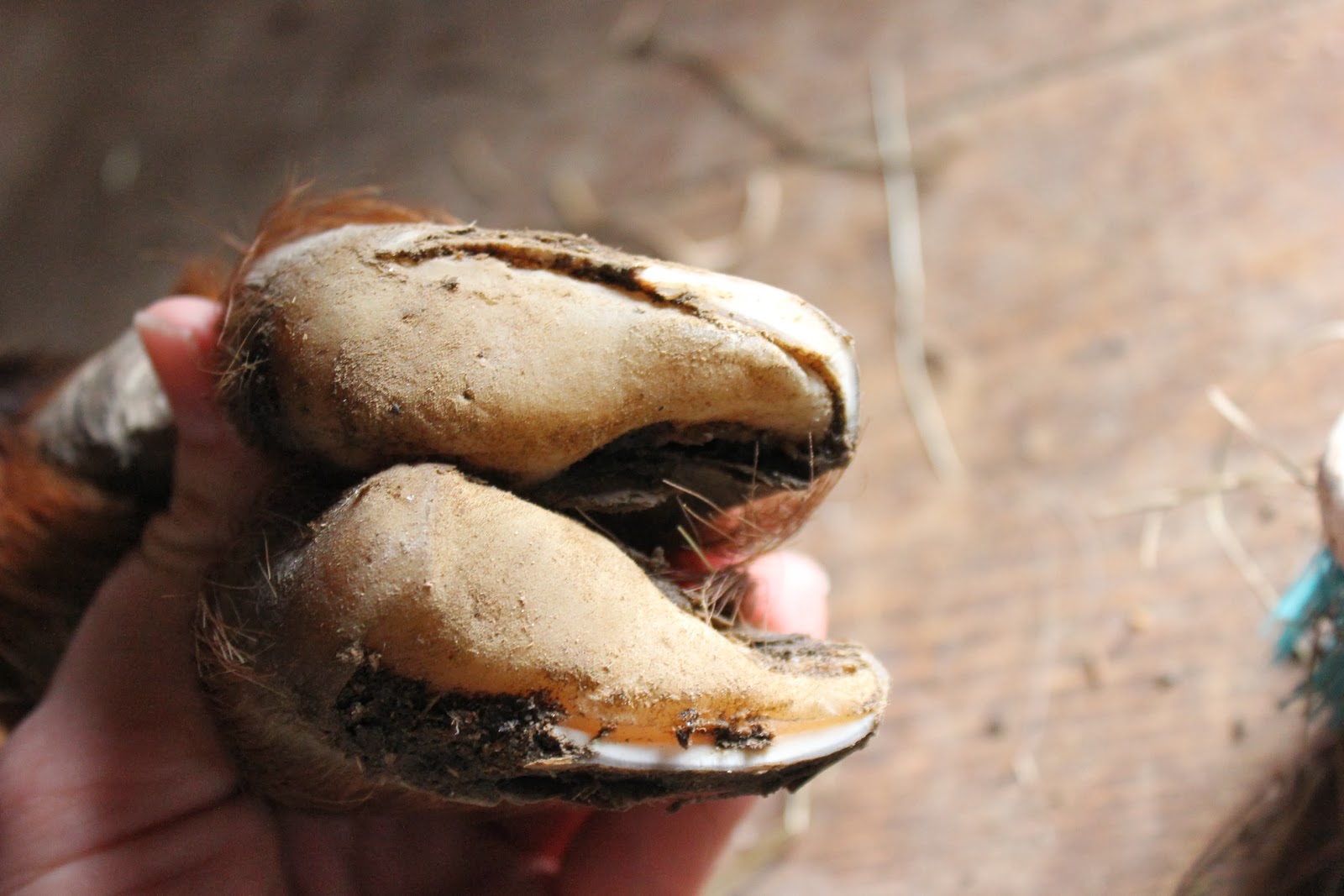 Gertie's feet are more of a challenge. Again, she came to us with very little hoof care. You can see in this picture that the hoof wall is separated from the rest of the foot on the lower left. There is also a pocket between the two tows. 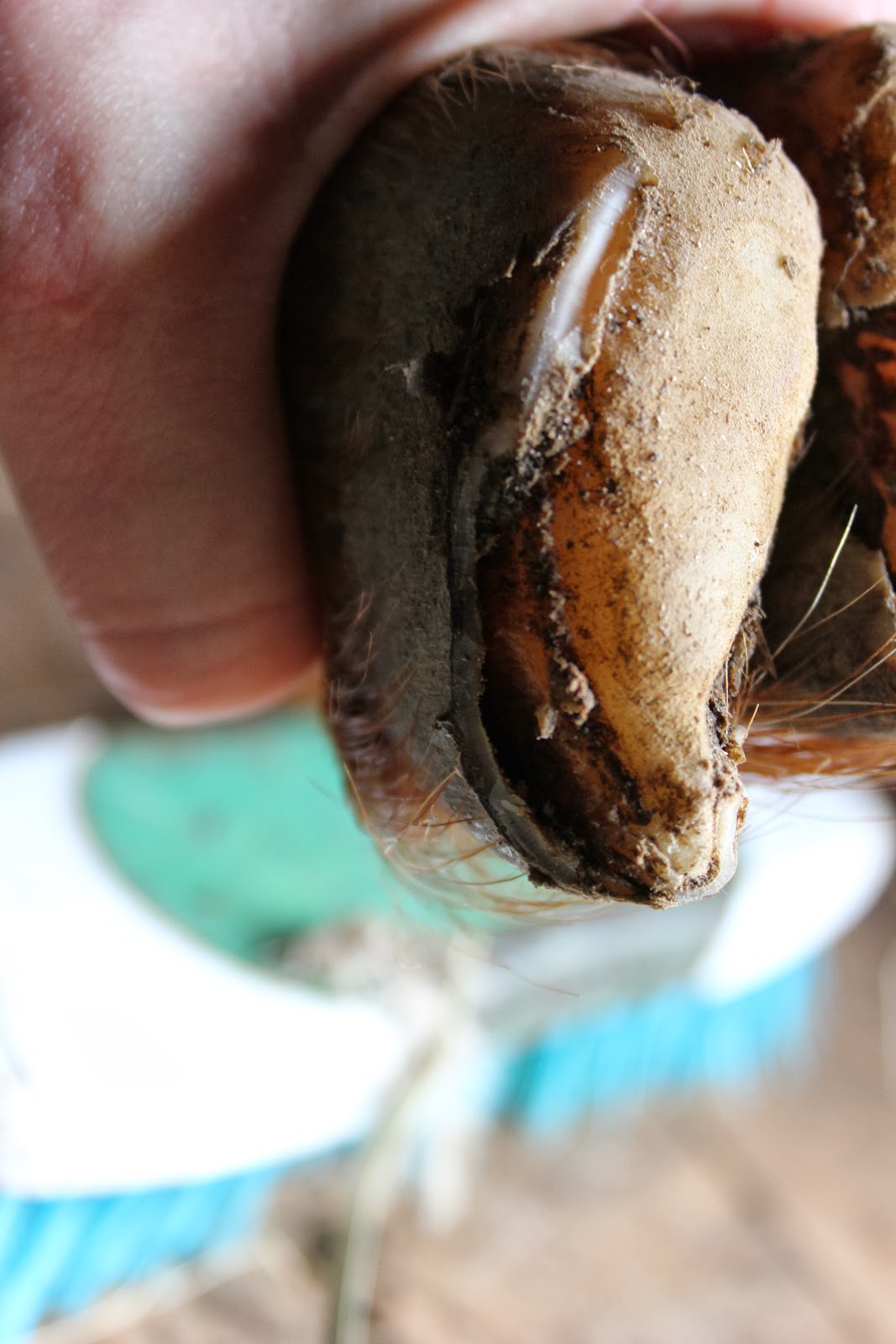 Here is another of Gertie's feet with the pocket cleaned out and trimmed back. You very quickly learn the smell of a problem foot when you start doing this. The best thing to do in this situation is to cut back as much of the separated hoof wall as you can and then treat the pocket with a product made for treating hoof rot. We like to  use Dr. Naylor's Hoof 'n Heel.

When we first got our sheep, pretty much every one of them was suffering from some pretty bad hoof rot on at least one foot. Using the Hoof 'n Heel and trimming back those problem areas did a great job of virtually eliminating the problem in our flock in a matter of a few months. 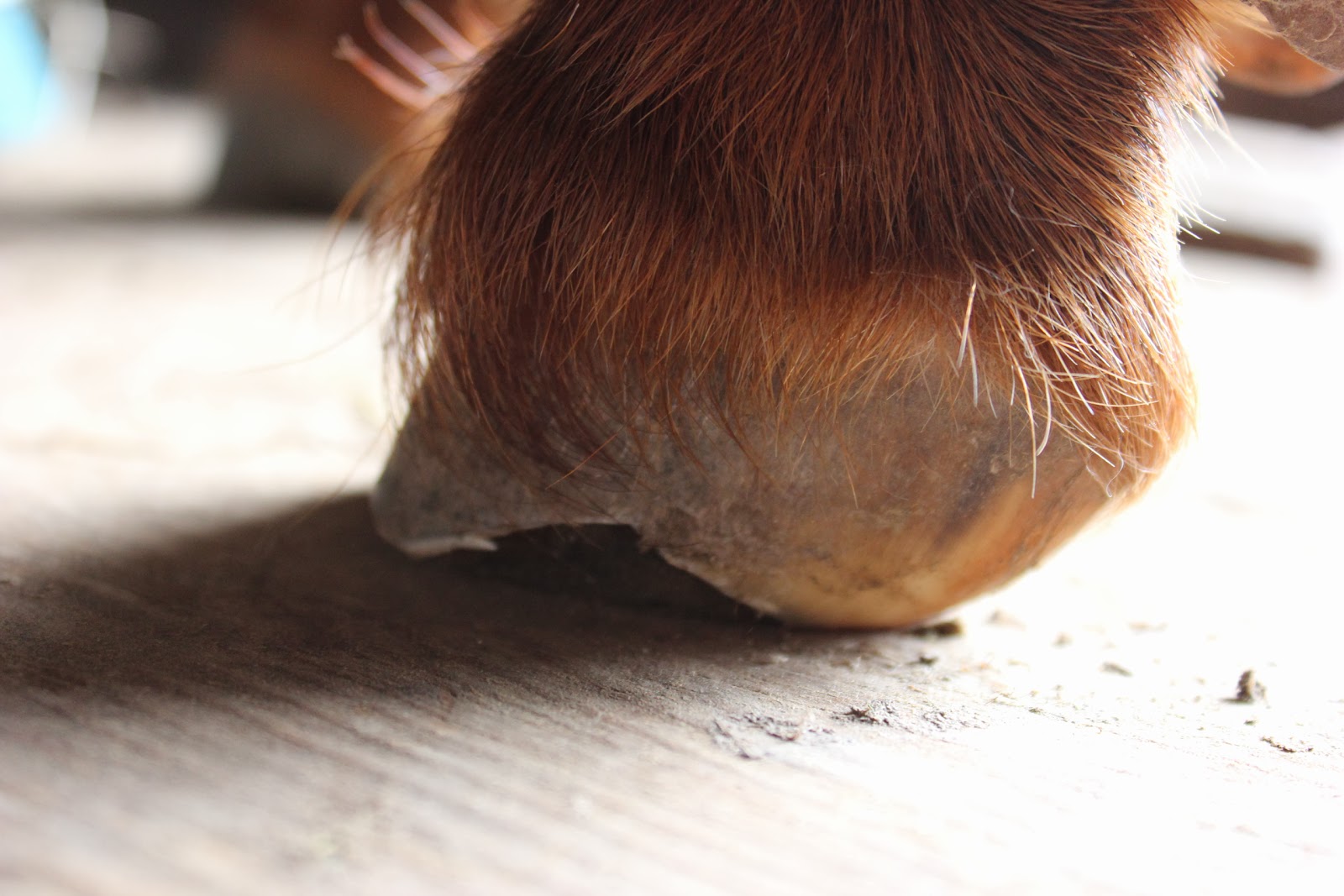 Here you can see how far back I have had to cut the hoof wall. It's important to realize the once separated, the wall will not reattach to the body of the hoof. Leaving that cavity only leaves the animals a pocket where dirt, feces, and infection can collect.

Once it is cut back as far as I am able to cut, I treat the pocket. Sometimes I will then pack the area with either hoof tar or a thick lanolin ointment to try and keep out moisture and debris.

With a hoof like this, I will make a note to check it again in a few weeks to make sure it is growing out properly. It may need more trimming and treatment before the bad area grows out. As you can see with Josie's feet, we have had a lot of success in turning very bad feet into normal healthy ones by staying on top of the trimming. 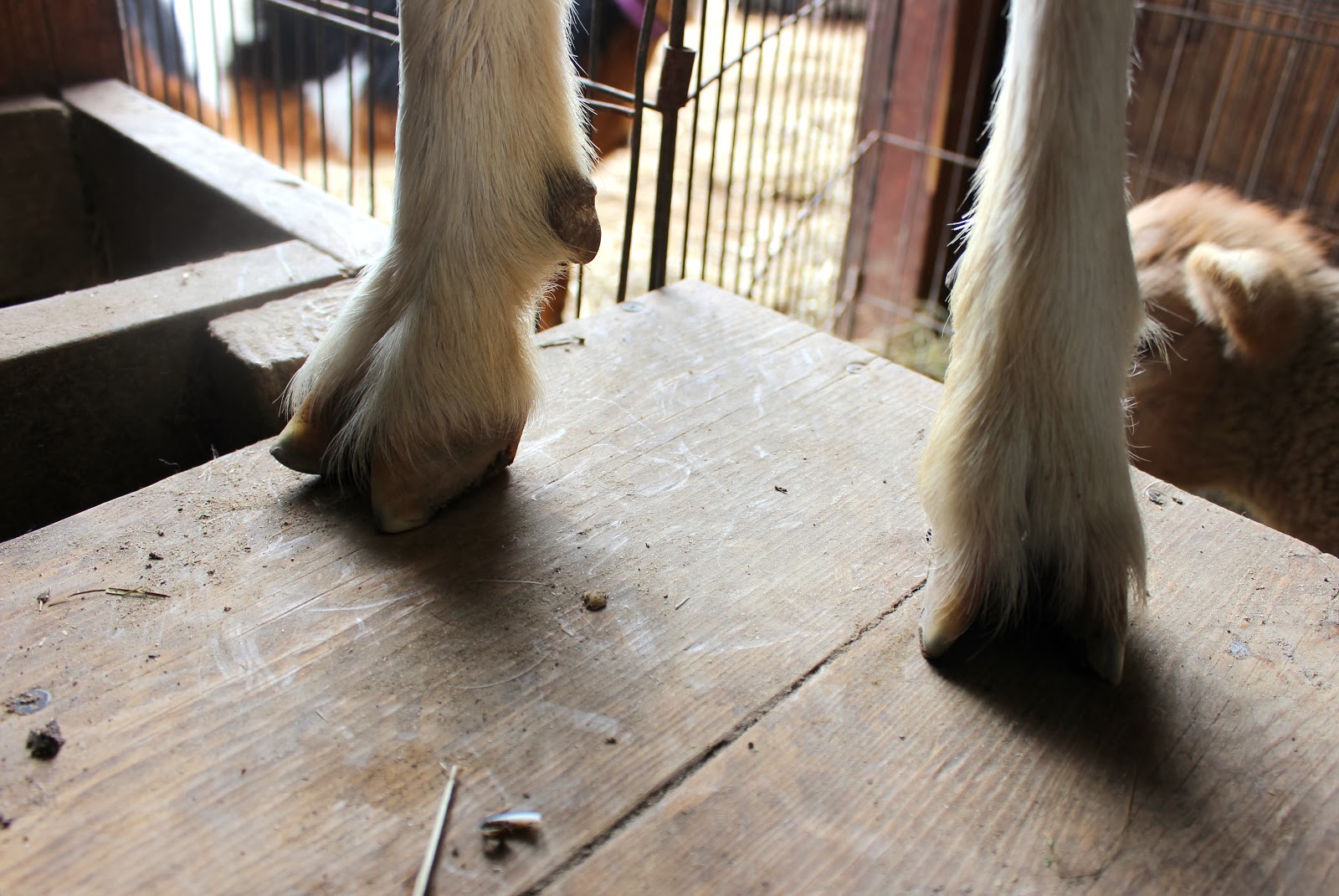 Thea's rear feet are always a challenge. Thankfully, she has never had a problem with foot rot, but her back feet seem to have been designed by Dr. Seuss. You cannot even see the full extent of how crazy they are in this picture. They tend to grow sideways and if I'm not very careful when I trim them, she will end up rocking back on her heels when standing. Maybe it's a Saanen thing or maybe her hooves weren't trimmed properly before she came to us, I'm really not sure. 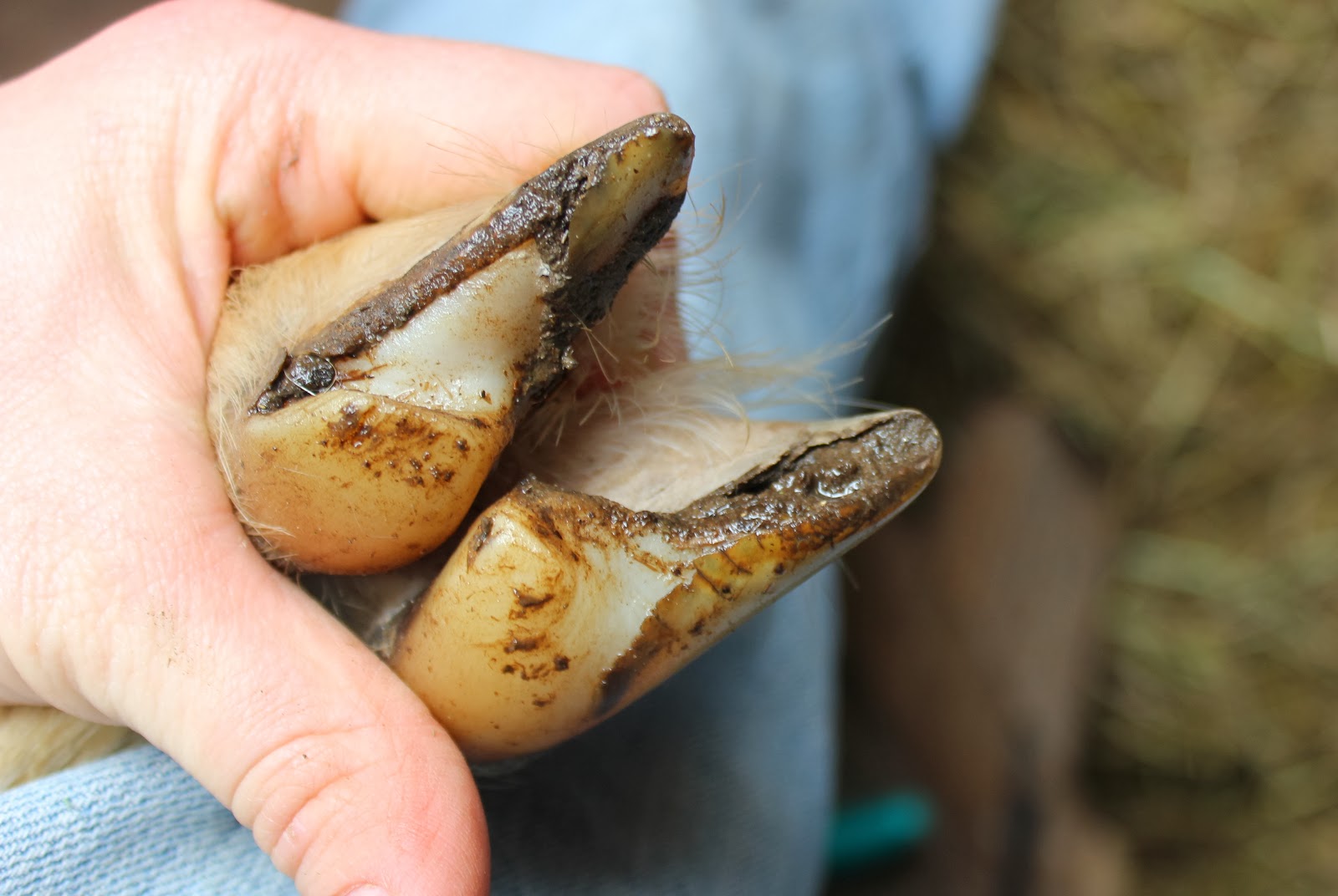 Pre-trimming Here you can see that her heels tend to overgrow and the whole right side of the hoof is curled in so that she is almost walking on the outside of the foot. No wonder she looks like a drunk camel walking around out there. 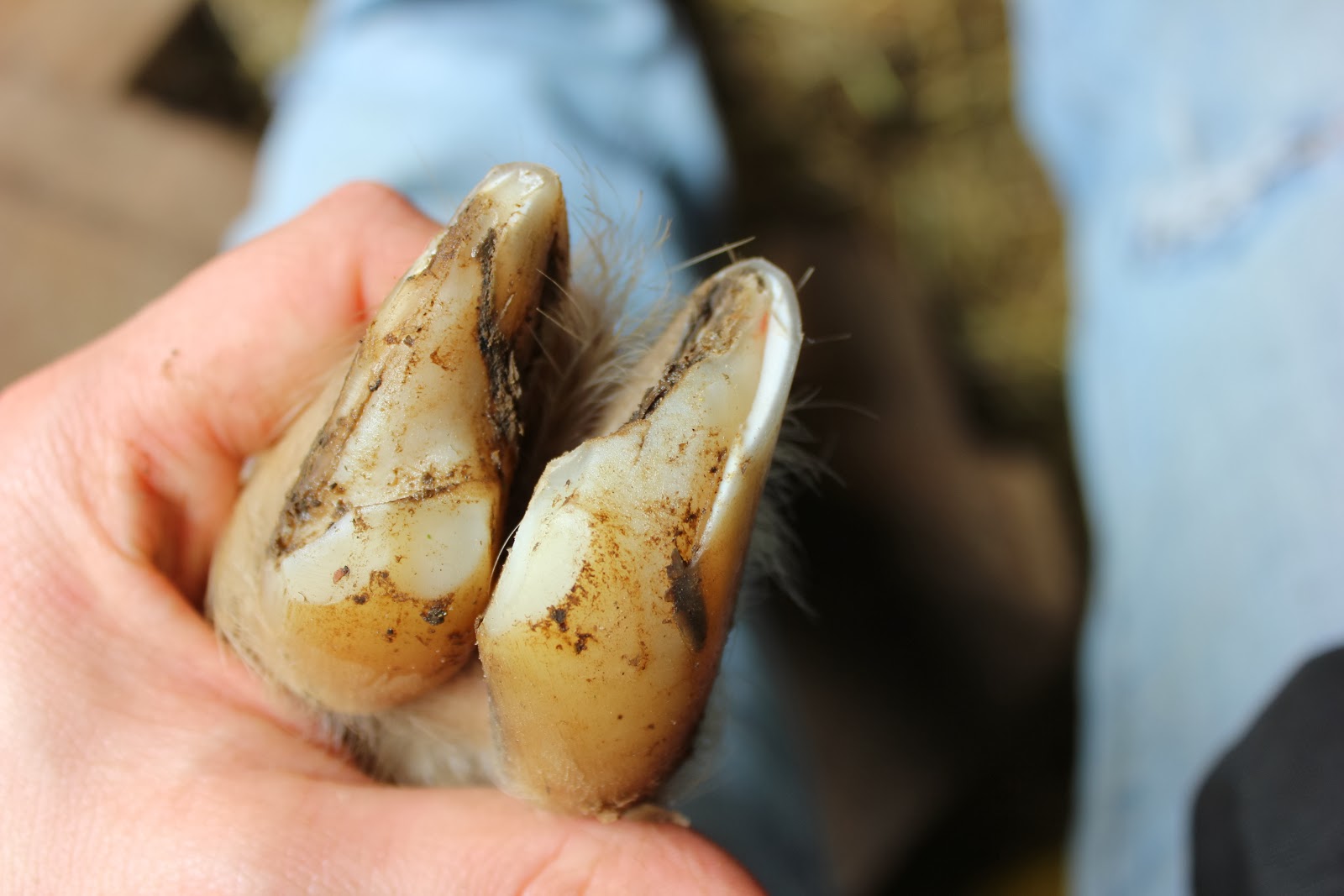 After trimming. You can see that I had to trim back the heels of the foot. The upper right side of the foot shows just a spot of pink where I had to cut more deeply to get a flat walking surface. 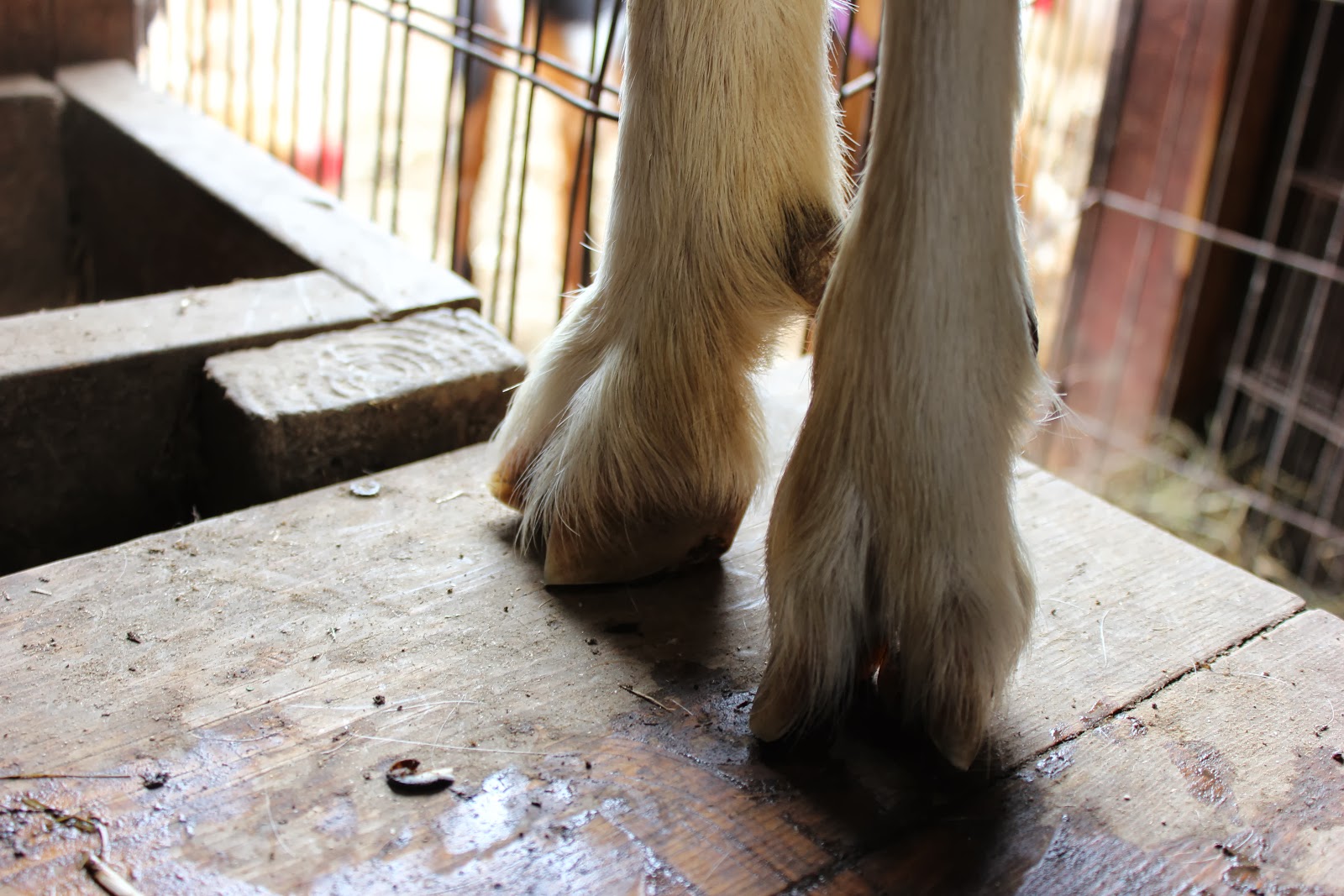 I actually had to do a bit more trimming on the hoof after the picture. With Thea, I always make sure to put the hoof down and see how it is resting on the milk stand before trimming some more.

I should note that hoof trimming does not hurt the goats unless you cut back past the pink to the blood supply. If you cut too deep, they will bleed just like a dog whose nails have been cut too short.

Even though our girls should be used to having their feet done, they still do a fair amount of squirming and kicking when their feet are handled. I tend to just hang on and wait them out. They eventually settle down enough that I can work. Some of the sheep have to be laid on their side for this. While I was trying to take pictures, Thea managed to get a good whack at my new camera. Whoopi once kicked me right in the nose so use caution! 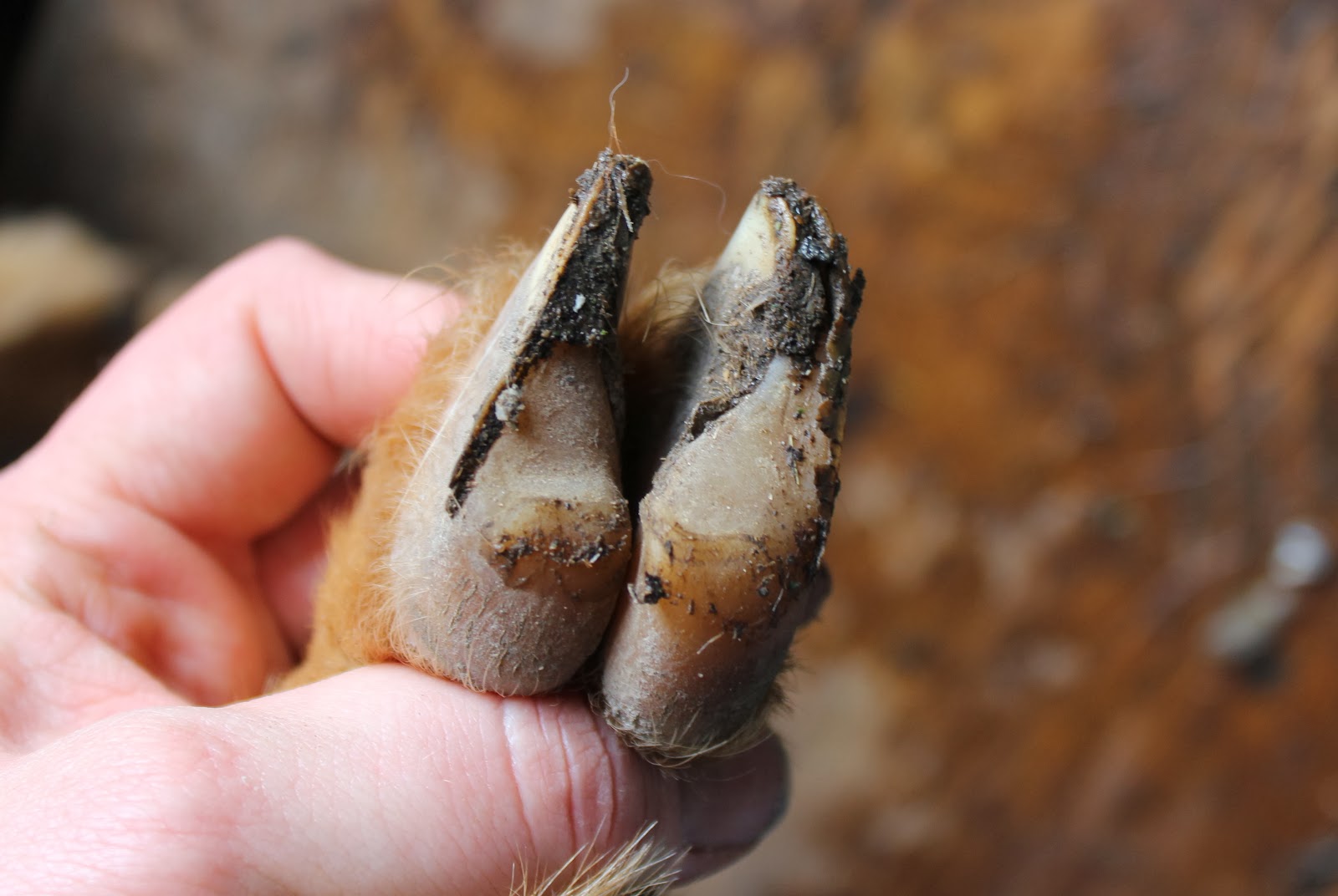 Thank heavens that Thea's daughter, Amelia, does not have her mother's wonky feet yet. 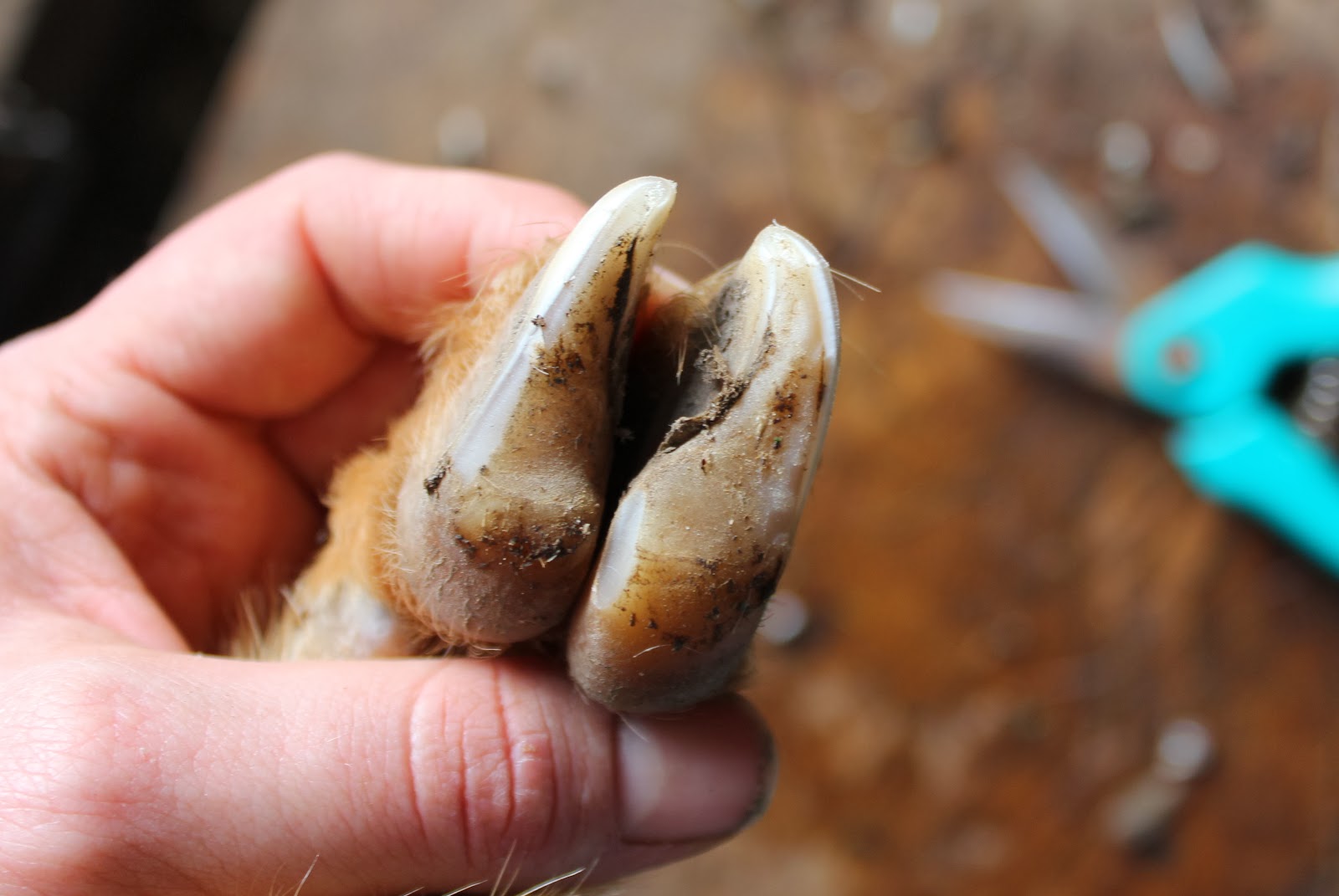 A simple trim around the outside hoof wall and this little girl was good to go!
Posted by Kaela at 2:37 PM