We made the decision to castrate Luciano a long time ago. For one thing, we don't want to breed him to any of our females. He's related to two of them and shares some characteristics with his mother and his sister that we'd rather not pass on to the next generation (bad hooves, breathing issues). Also, we really like him. He's a sweet boy who loves giving cuddles and kisses. Trust me when I say that these are not things you want to do with a buck, especially when he is in rut.

Bucks in rut can be aggressive. All that testosterone scrambles their brains, and they are as likely to butt you as to say hello. They also have a lovely habit of spraying smelly urine all over their front legs and faces. Just yuck!

Even though we are removing his ability to reproduce, Luciano will still have a role to play here on the farm. Once he is weathered (neutered), he can be used as a companion to any future intact bucks that come around. After he had bred the girls, poor Rocky spent way too much time in the back pasture with only the sheep for company.

We have waited this long to get the job done because the poor little guy went and broke his leg right around the time we would have been castrating him. My vet recommended waiting until the leg was fully healed before causing him any more stress.

We did a lot of research on different methods of rendering a male goat infertile. A lot of people seem to think that banding is cruel. Plus, Luciano was already too old for this method which is best done when they are very young. Surgical castration opens them up to infection and can have other complication if done incorrectly. The method we settled on was using a burdizzo or emasculator.

I know they are rather nasty looking, but I promise we did our research on this. Big Onion actually found a study that tested pain response using the three methods I just listed. This method is the least painful and the pain lasted the shortest amount of time. That said, before we started, I did give little Luch a dose of Banamine (an injectable anti-inflammatory) and some Arnica to help with the pain. I also made sure to apply some Arnica gel on the area afterward.

Here's how it went with some tips and instructions for anyone considering this method.

Be warned! There are pictures of goat parts and talk of clamping certain areas. Those with delicate sensibilities may want to sit this one out. 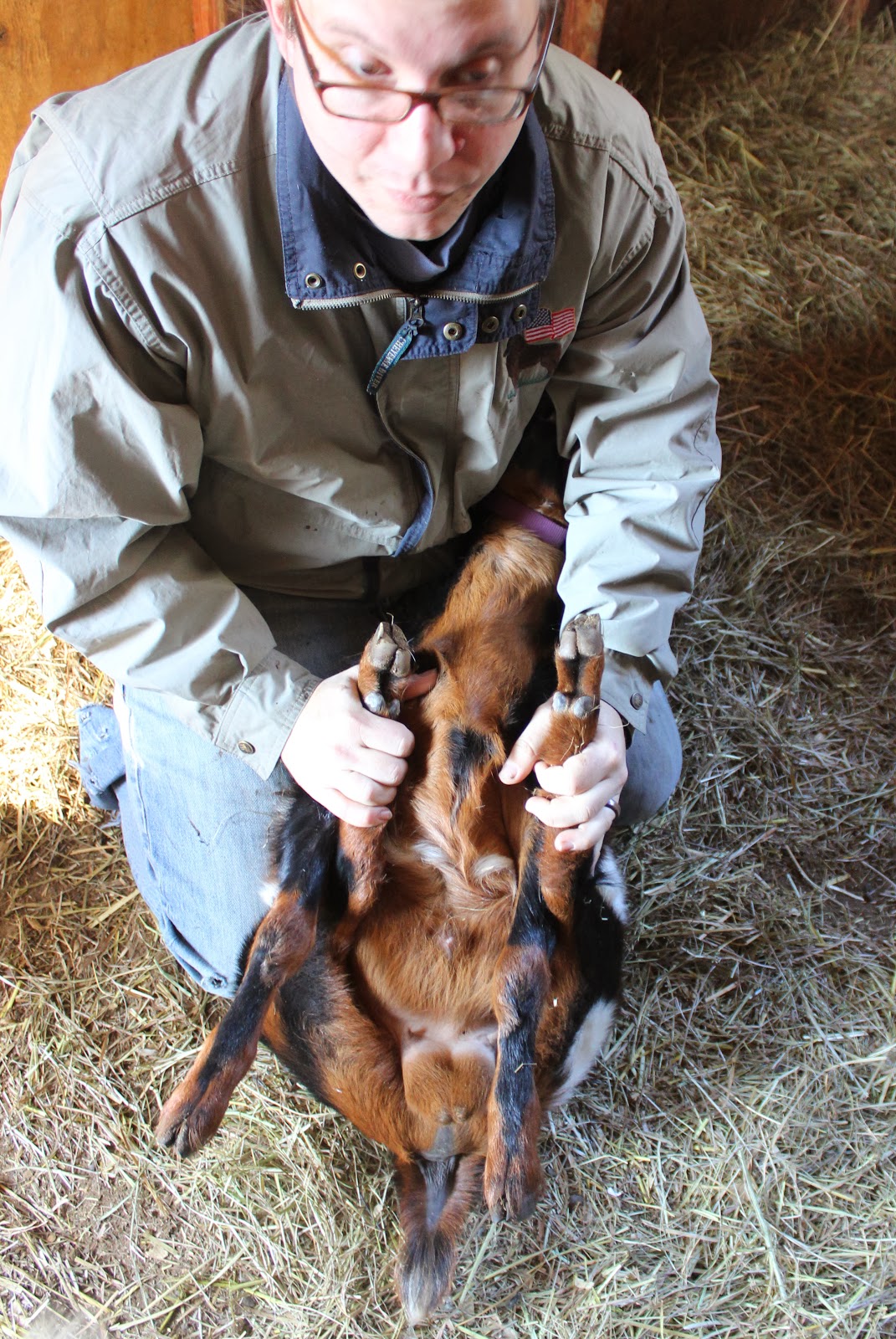 Big Onion and Luciano assume the position. The big thing here is to make sure those back legs are secured. You do not want to take a hoof to the face while handling the family jewels. 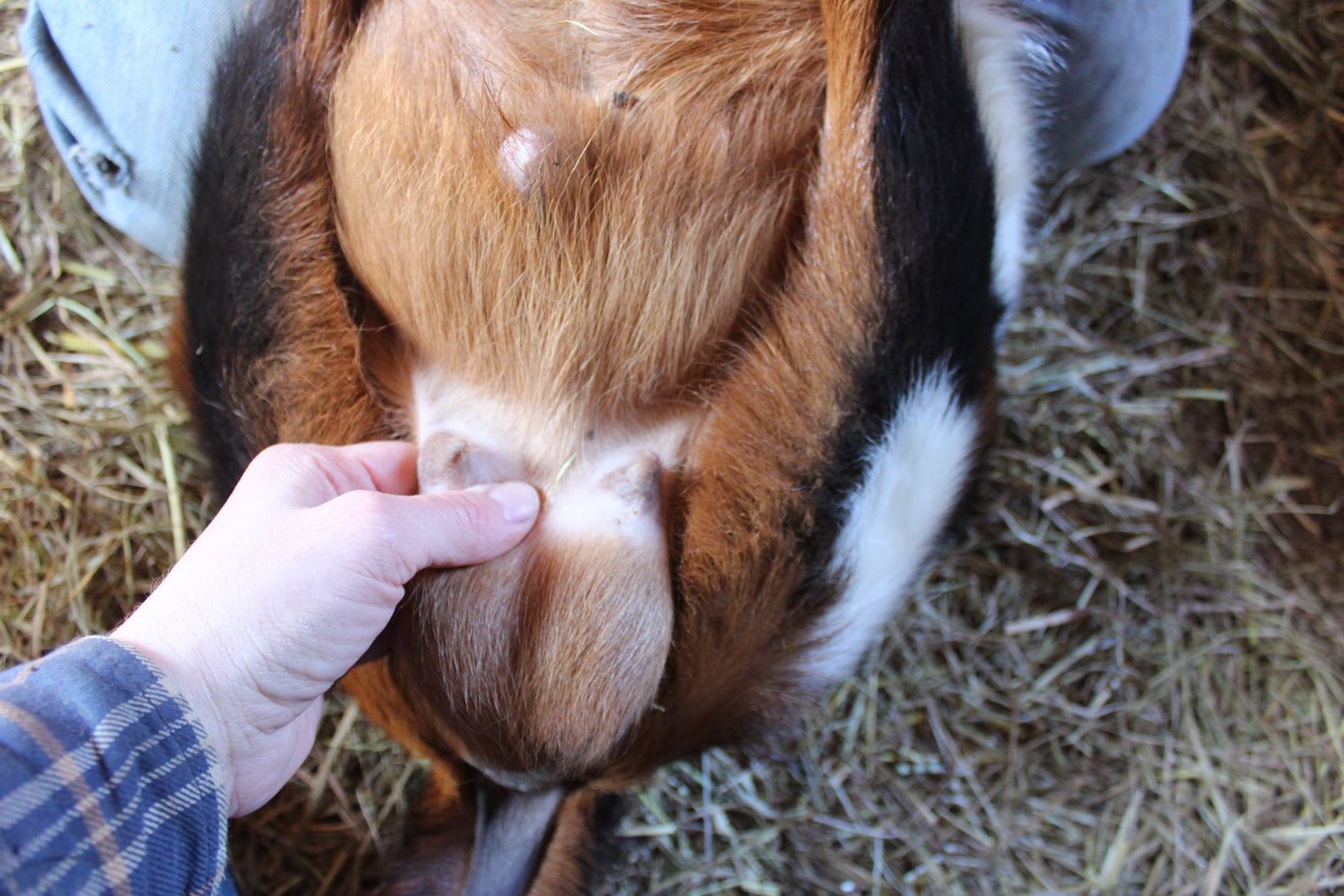 The burdizzo works by clamping down on the blood vessel and vas deferens that lead to each testicle. It basically disconnects the pipes that let the testes do their thing.

Here I am feeling for the two tubes. There is a spongy feeling blood supply and a thicker, rope like tube leading to each testicle. You should be able to feel both. It's important that both tubes on each side end up getting clamped or the castration may not work. 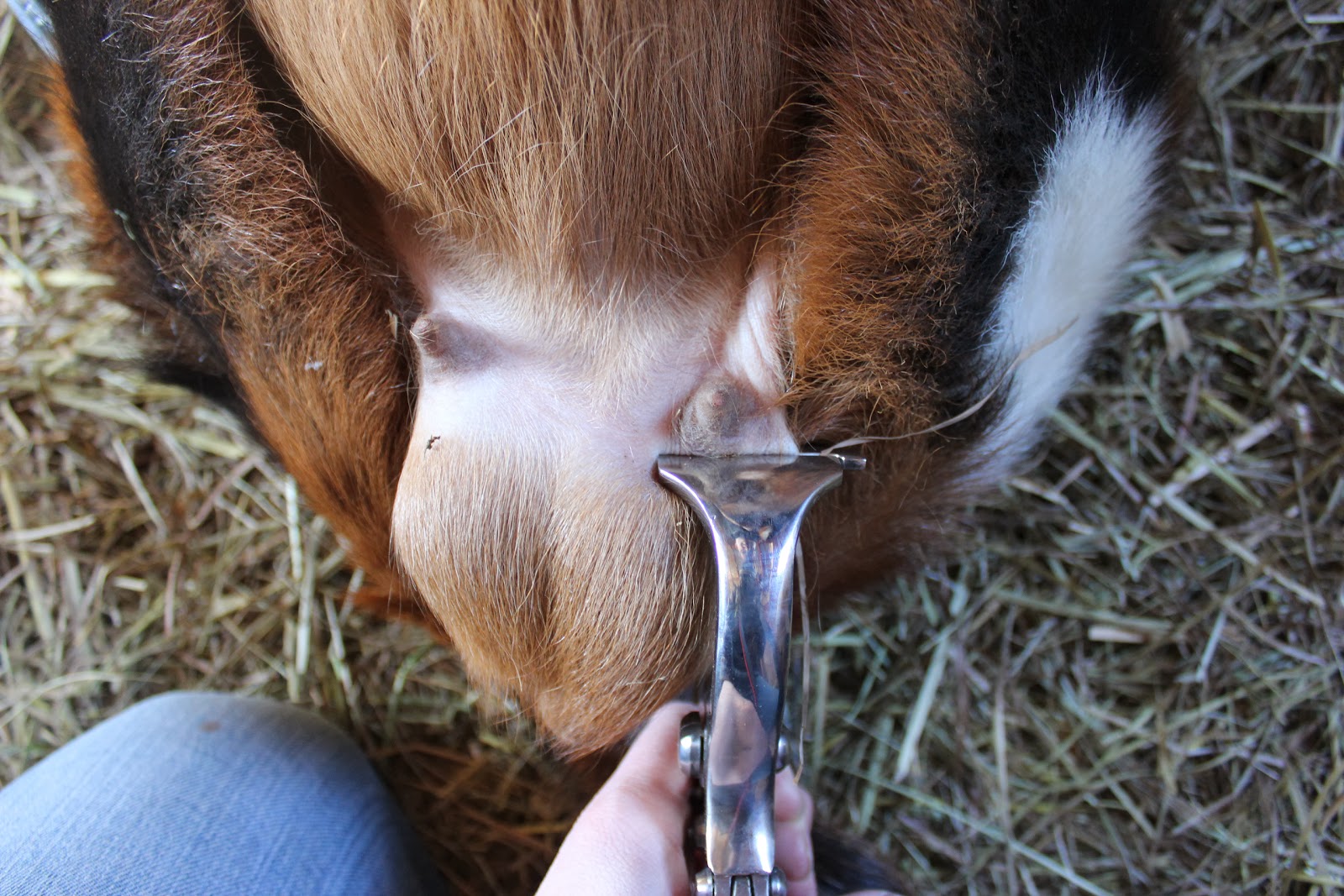 I hadn't counted on finding his nipples so far down. This gave me the added challenge of avoid them while making sure to catch the things that need to be in the burbizzo.

With one hand, I held the two tubes to the side of the sac while getting the device in place with the other. When closing the burdizzo, it's important to make sure it is completely closed. The quicker the better for everyone involved.

Full disclosure time: this part did hurt. The goat did yell as I clamped down the device. I was expecting this, but it still took me by surprise.

After the initial clamp, we held it in place for about a minute then released. Some people like to do this twice on each side, but none of us were up for a second round. Plus, I felt like I had gotten everything on the first try. 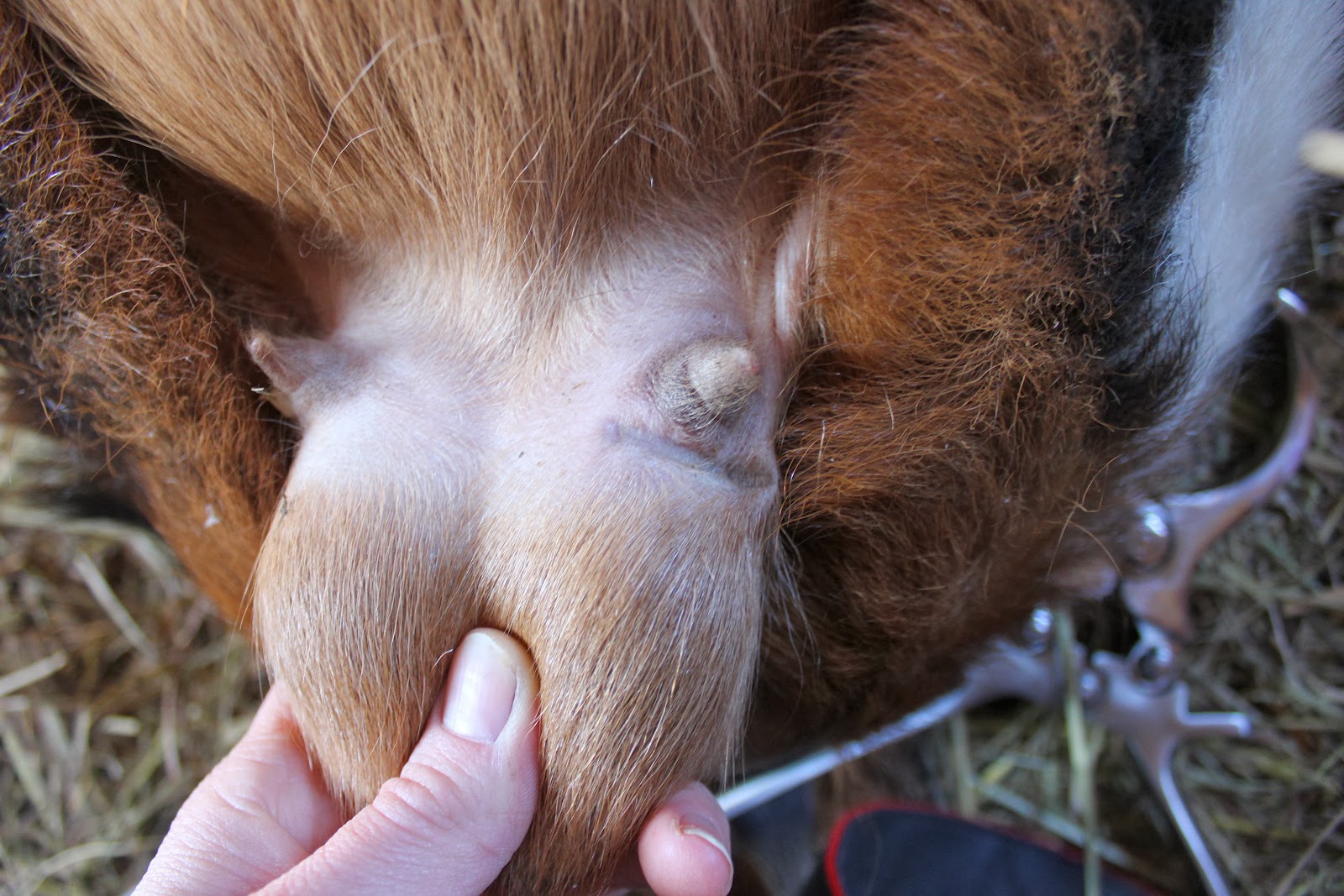 Here you can see the intent left after removing the burdizzo.

I repeated the procedure on the other side. The second time, I clamped a little farther in just to make sure nothing slipped out of the clamp before it was closed down. 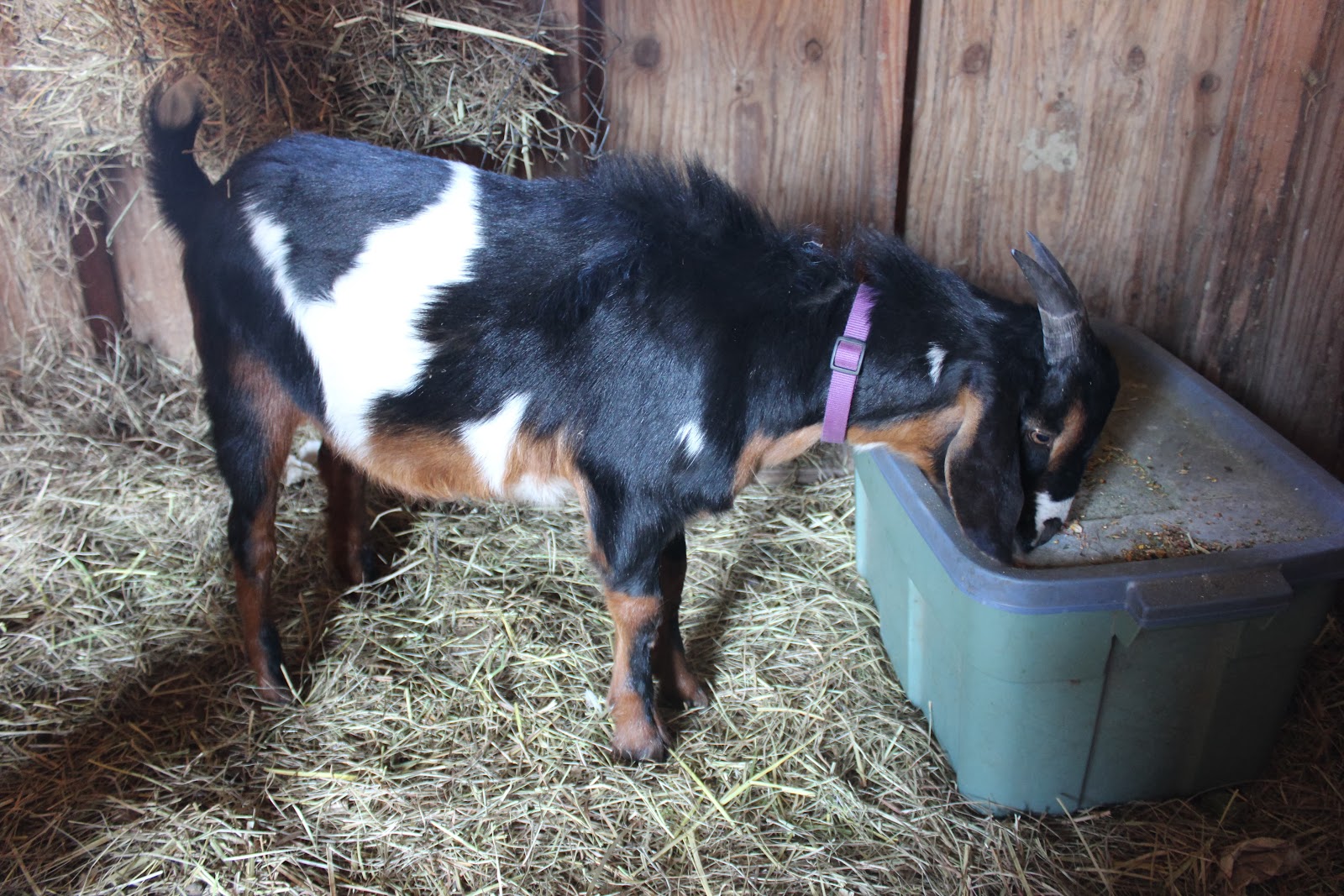 This picture was taken literally seconds after Big Onion let go of the little guy. He immediately popped up and started looking for more chow (which of course we gave him for being such a trooper).

Later that day, Luciano was running around the field, playing with Amelia, and even came with us on a walk to the back pasture so obviously he wasn't too traumatized by the experience.

I highly recommend this method of castration. Now that we have the tool, it can be used on sheep, goats, and cows in the future. It's quick and bloodless with almost zero risk of infection. The two very brief moments of discomfort are quickly forgotten.

It has been a couple weeks since we did this procedure. At first I was convinced that we would have to repeat it on one side, but now we are starting to feel the testicles get smaller and harder from the bottoms up. If done right, they should be noticeably smaller within the next few weeks.