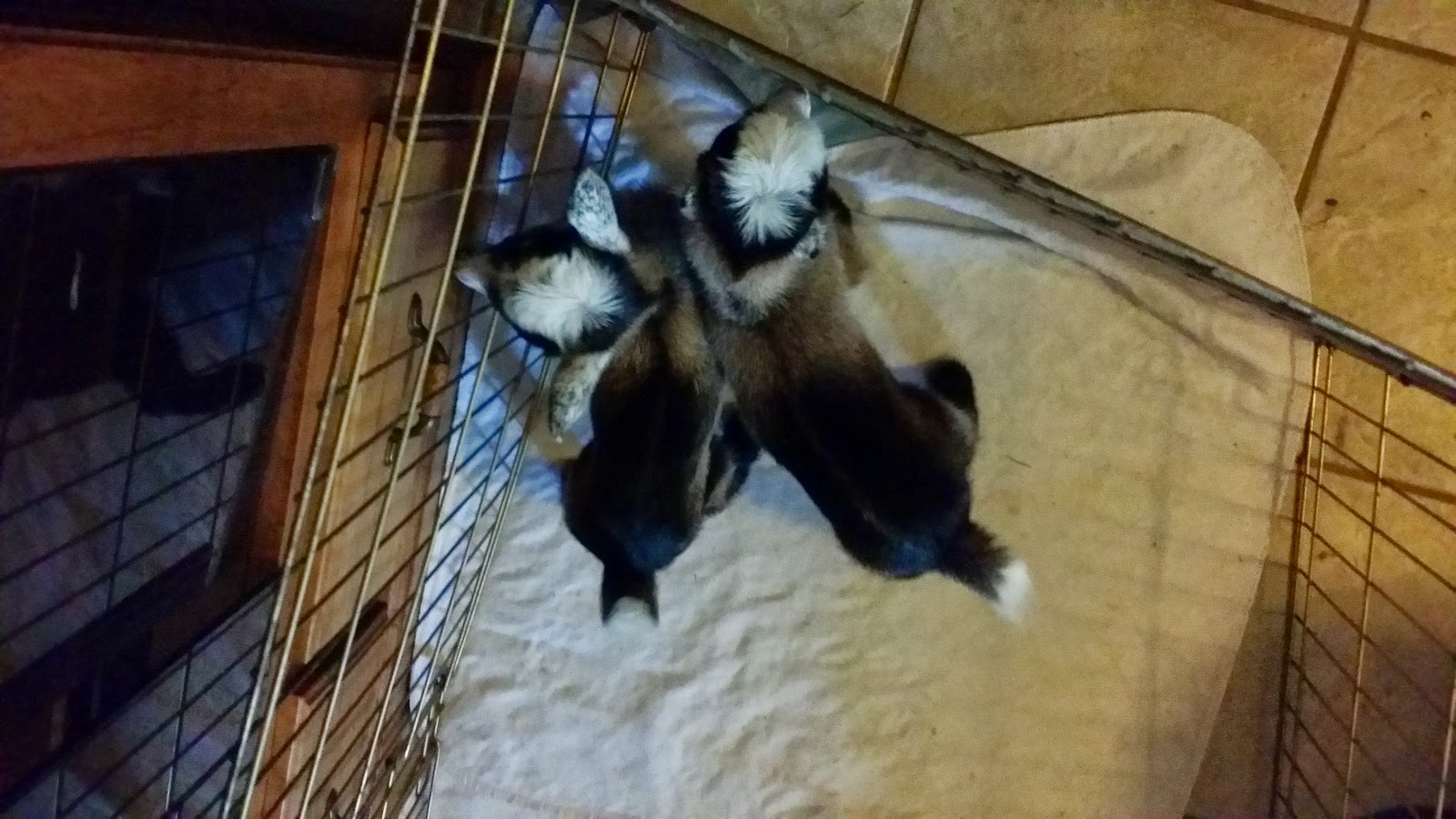 Once all the dust of Gwen's kidding excitement had settled, we were left with two tiny little goatlings living in our kitchen. Gwen's two doelings, Frankie and Georgie were absolute dolls, but we did have a lot of trouble with little Georgie at first.

The tiny thing just would not take a bottle. Try as we might, when you put the nipple in her mouth she just would not suckle. We tried two or three different styles of nipples including one made especially for weak kids. I even tried putting a pin hole in the end of the finger a rubber glove and seeing if she would nurse off the softer material. No luck.

Determined not to lose this little one, we resorted to tube feeding her. Tube feeding is not as scary as it sounds and in this case, I am absolutely certain it kept Georgie alive. Every few hours we would fill a syringe with about 2oz of warm colostrum and pass a small, flexible tube into Georgie's mouth and down into her stomach. The only dangerous thing about tube feeding is that you can accidently pass the tube down the wrong pipe and end up in the kid's lungs instead of the stomach. Dumping liquid into the lungs is a great way to lose a kid fast. It's important to pass the tube slowly and pause when you reach the back of the throat to let the baby swallow the tube. Do not push forward while the kid is vocalizing. Obviously, this is no fun for the kid, but the key is to stay calm and move slowly and steadily  Once the tube is in place, we like to push just a tiny amount of liquid out then wait to make sure the kid is breathing normally and not coughing. If all goes smoothly, you can quickly give a weak kid all the nutrition she will need until she can mature enough to learn to nurse properly.

Every feeding time we would try again to get Georgie to suckle. We tried tickling her throat and her tail. We tried having her start to suckle on our finger then switch to the bottle. We even tried putting a little molasses on the nipple to entice her to try it. Every time, we would have to resort to tube feeding her to keep her going.

The odd thing was other than being a bit smaller than her sister, Georgie seemed fine. She was up and bouncing around as much as day old kids normally do. She was talking to her sister and to us in little goaty chirps. She just would not take that nipple!

After about a day and a half of tube feedings, we finally got her to make a couple of tiny sucks on the nipple by getting her under Big Onion's chin and making sucking noises ourselves while holding the nipple in her mouth. It wasn't much, but it was a start.

In the meantime, Eve had kidded her one little doeling, Turnip. Both were doing great and Eve was making lots and lots of milk. We decided to bundle Gwen's two little girls up and bring them out to see if the real thing would hold more appeal to Georgie. 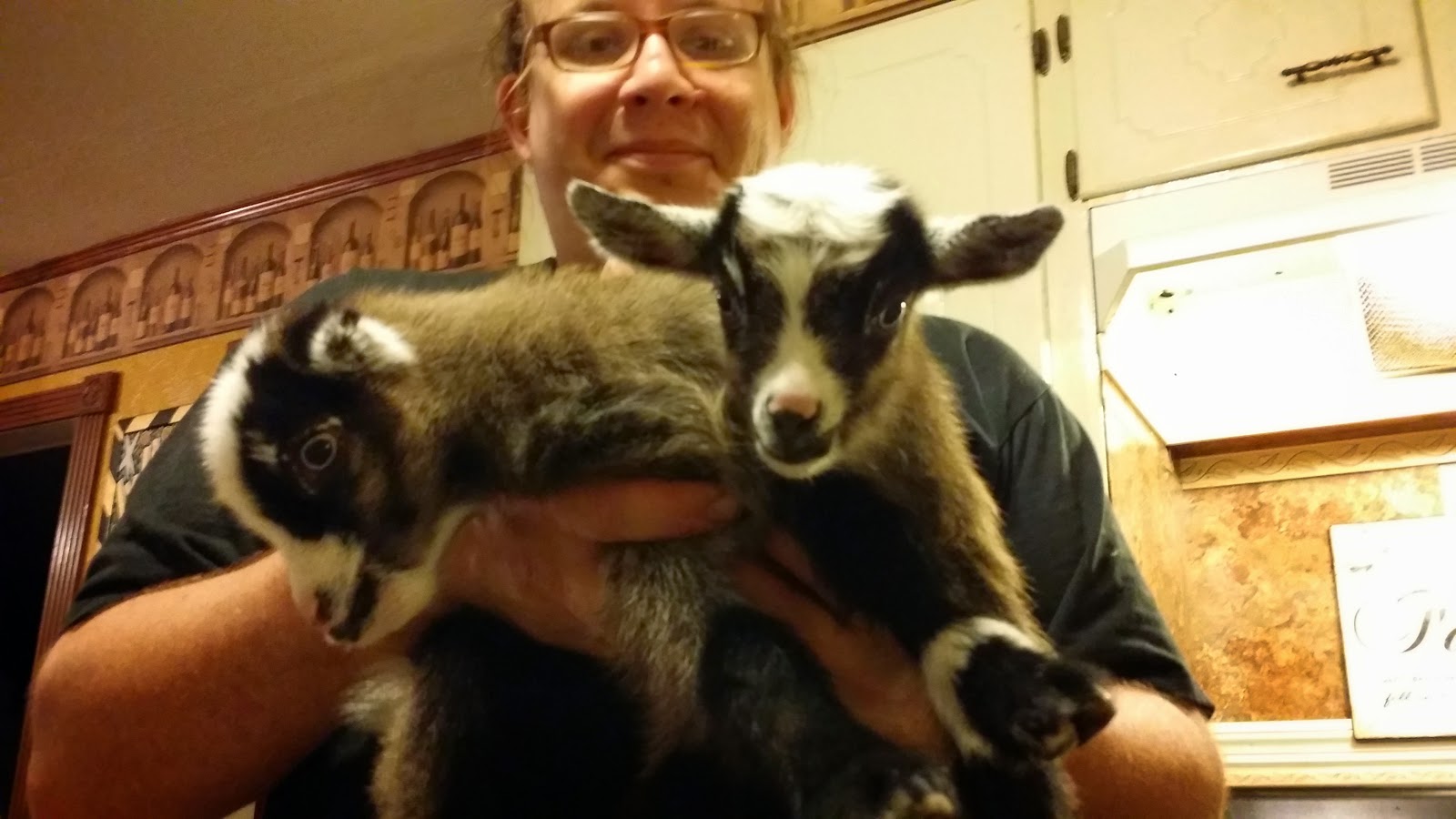 Trying to get two squirming kids from the house to the milk room without letting Gwen see or hear them was quite the challenge. Eventually we got Eve up on the milk stand and tucked Georgie girl under her and don't you know that little kid started nosing around and found Eve's udder. Within minutes she was nursing away like a little pro. I guess there really is nothing like the real thing!

At the next feeding after this, Georgie finally starting suckling from the bottle. I got so excited I yelled and dropped the bottle, splashing both of us with milk and half scaring the little goat out of her wits! Thankfully, she forgave me my clumsiness and went right back to drinking from her bottle like she'd been doing it her whole life! 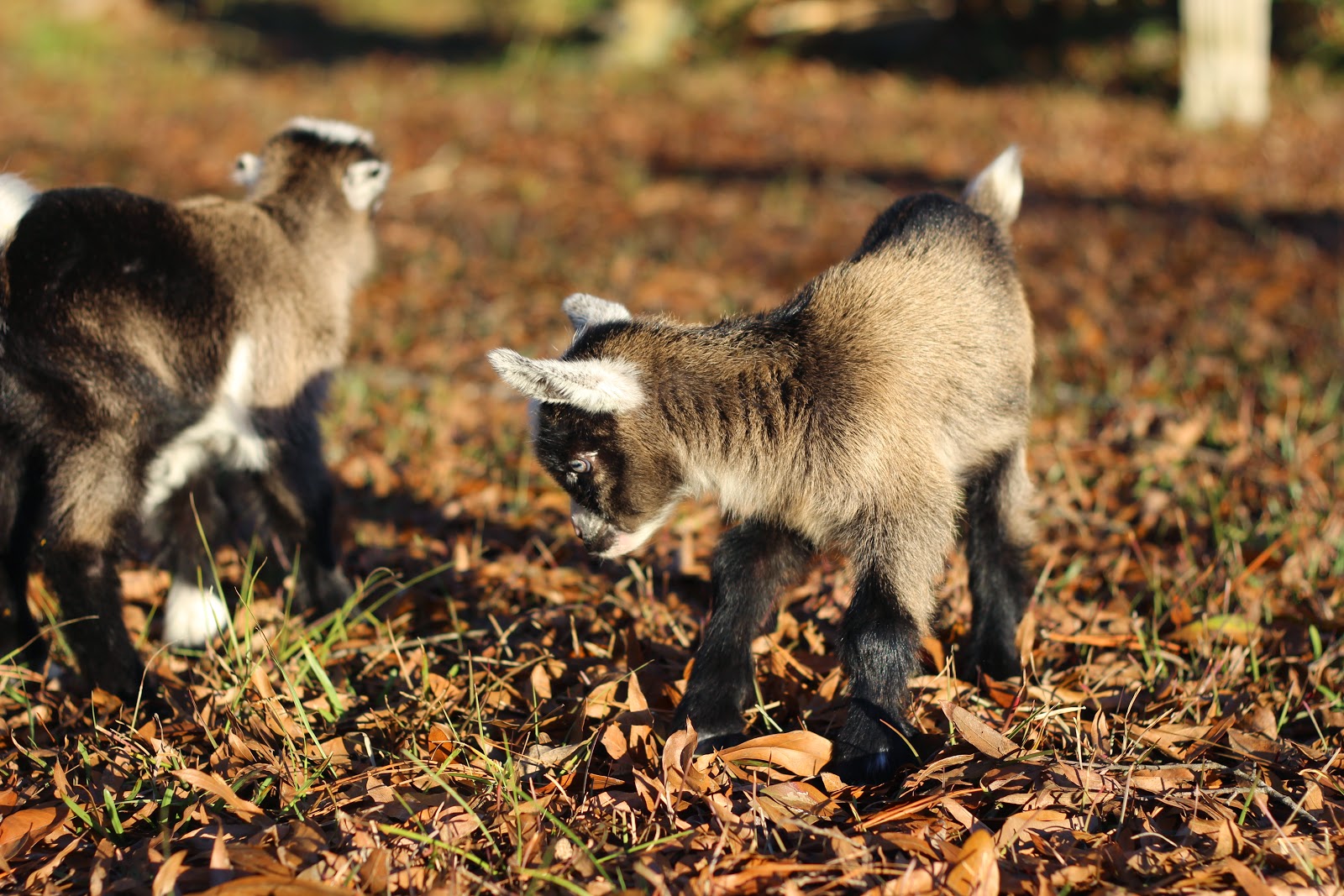 Since then both girls have been growing quickly and taking their bottles with no problems! Eve is making more than enough milk to split between the three babies with the help of a little formula here and there, and the girls crack us up constantly with their little monkey sounds and happy, hoppy little dances.

I have to say I'm not that surprised that one of Gwen's kids would give us so much trouble since Gwen herself is the princess of the barnyard and has given us all manner of headaches in the past. As for Georgie, I guess the little brat just wanted a taste of the real deal! 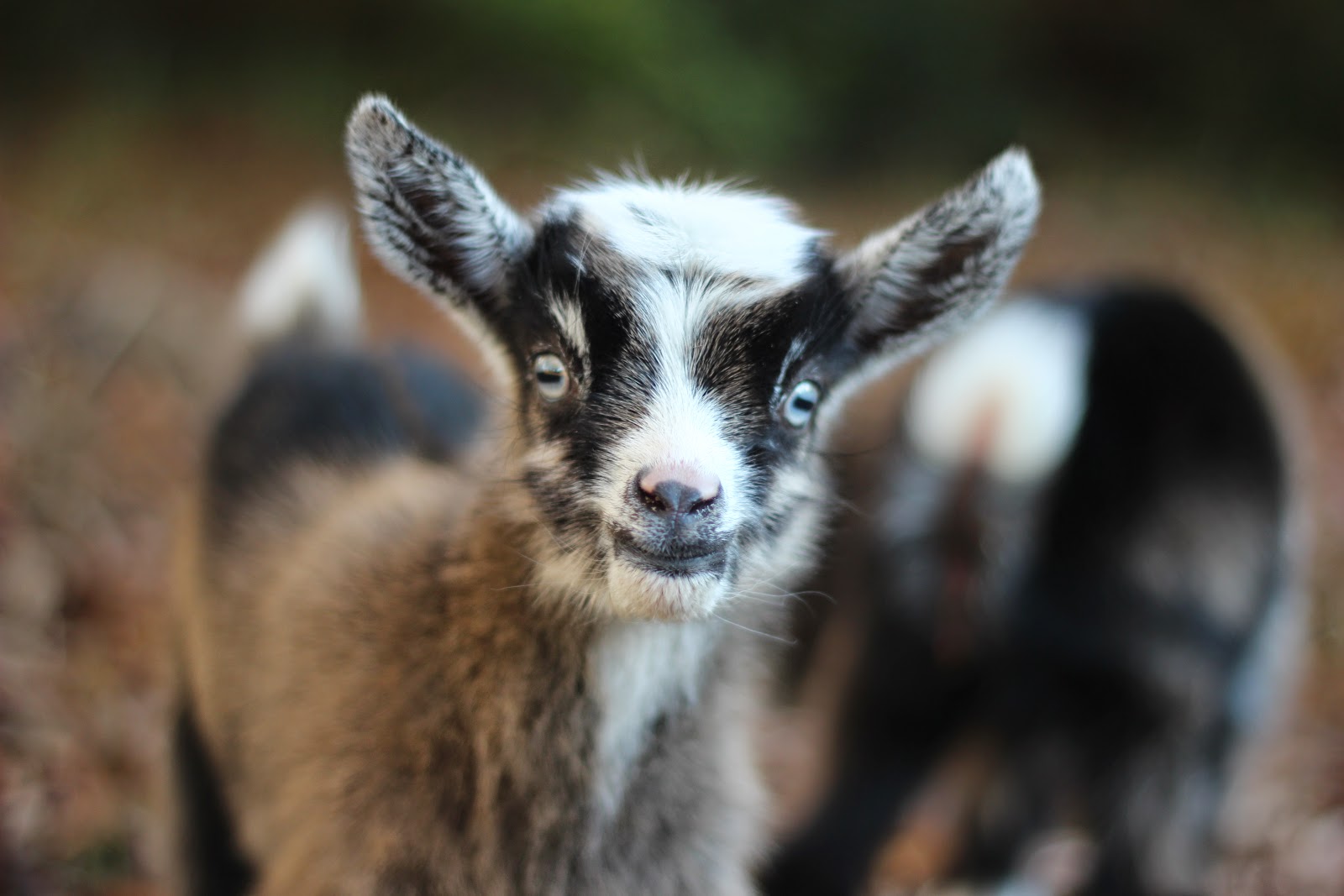