We knew Gwen's time to kid was drawing near. Her udder had started to fill and the ligaments on either side of her tail were getting very loose. Gwen herself was getting rather sick of us spending so much time staring and prodding at her back end. Since Gwen is one of our girls with CAE, we take extra care to make sure we are there when they kid and can pull the kids before momma has a chance to bond with them. CAE can be transmitted by nursing, so we make sure to tape up their teats when kidding time draws near. All the kids from the positive girls have to be pulled immediately and fed heat treated milk and colostrum. 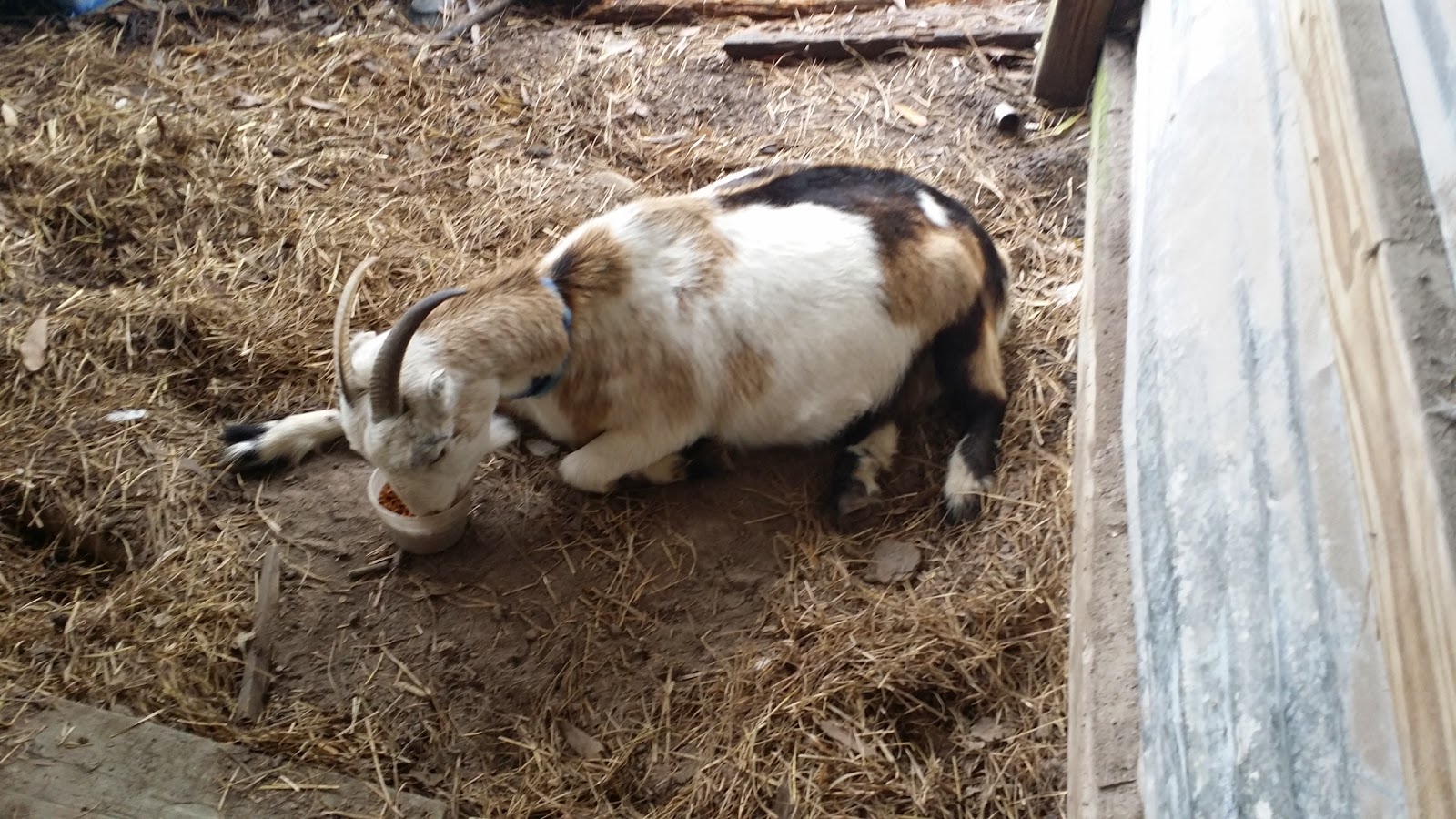 That morning we found Gwen sleeping late into the day in the small open stall near where the sheep like to sleep at night. This is rather far away from the area where the rest of the herd spends the night. She spent most of the day in that stall and often when I would check on her, I'd find her laying down. Since she is the princess goat around here, I happily brought her hay and water and feed which she nibbled on very slowly.

That evening after I had put all the birds away, I checked on her again to find that she was in active labor. The sun was going down and that area has no lighting so I made the decision to move her to the milking room. Big Onion was away making an egg delivery in  New Orleans so while I gathered an armful of hay and started to collect all the things I would need, I got him on the phone and tried to convey the fact that Gwen was about to give birth without resorting to yelling at the poor man something along the lines of, "OMG THE BABIES ARE COMING! GET HOME NOW!!"

I quickly spread a deep layer of hay in one corner of the milk room and gathered a bucket of fresh water for Gwen and anther of soapy water for me. I ran to the house for an armful of towels. I even changed out the light bulb in the room for something a lot brighter. Then I dragged a very begrudging Gwen up to her new cozy, well lit nest and settled down in the hay with her to wait. 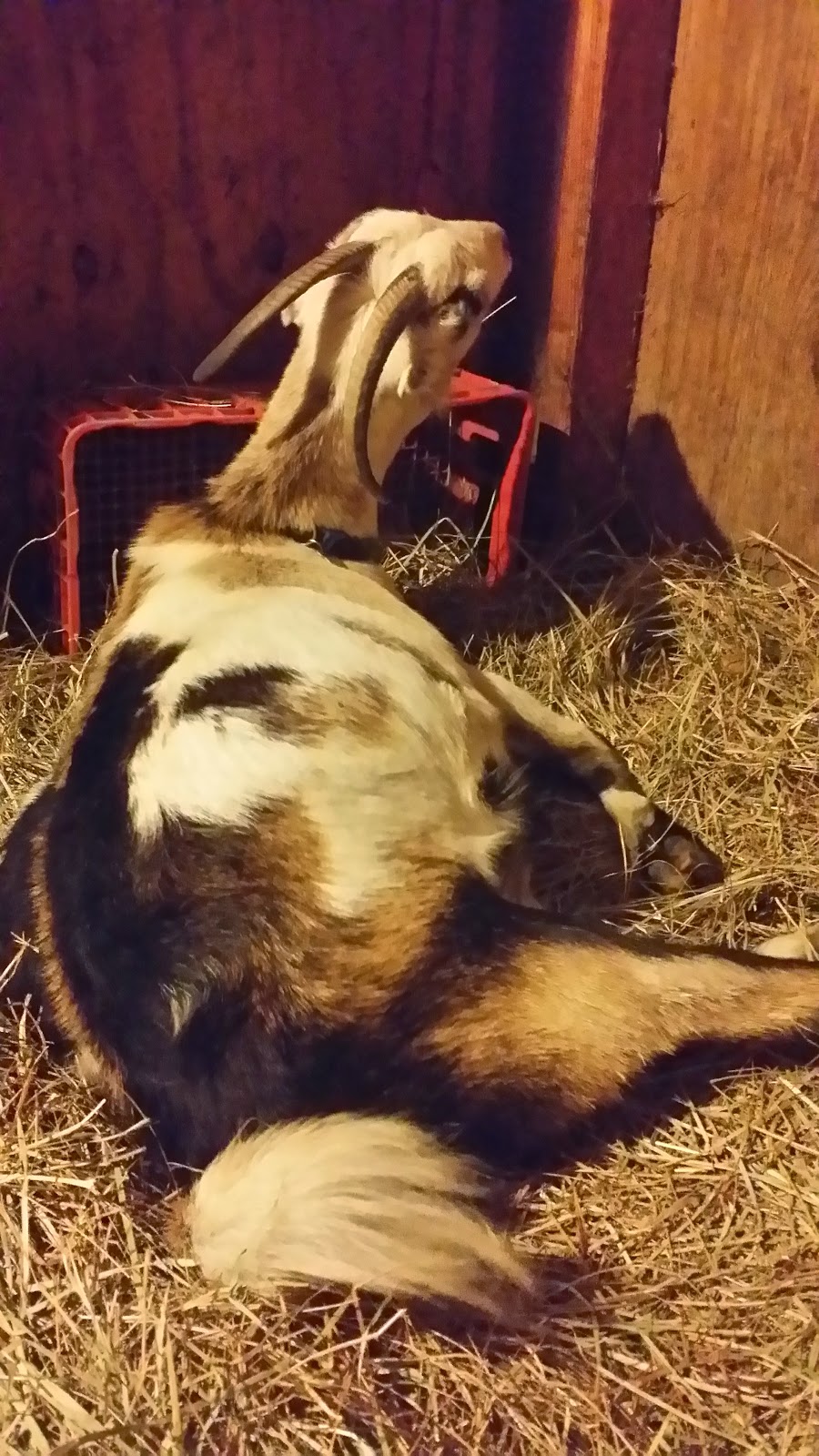 It seemed like forever that she was grunting and groaning and pushing with nothing happening. I called Big Onion every few minutes to make sure that he was in fact on his way and to give him our (lack of) progress reports. Gwen was taking frequent brakes to rest her head on my arm and nap in between bouts of contractions and pushing. I was just starting to wonder if I would have to intervene when a telltale bubble started to appear at her rear end. A few more pushes and that bubble bust in a stream of liquid and a tiny little nose and mouth appeared. There was a little tongue was sticking out to one side of the mouth and I carefully touched it with one finger to make sure the baby was still alive. To my delight, the mouth moved just a little. Meanwhile poor Gwen was pushing with all her might. It sure didn't look like there was any way for the rest of that head to fit out the backside of our smallest goat so I started to gently help as best I could. Most kids are born feet first so you have something to grab and pull. This kid decided to enter the world nose first making it very hard for me to give much assistance. After what seemed like forever to both me and Gwen, the head finally came free and the rest of the body followed quickly.

I was so surprised to see that our flashy colored Gwen and honey and white colored Gimli made such a darkly colored little creature. I only had a second to ponder before I wrapped that baby a towel and hustled it off to the poultry house. I took a second to find that Gwen had given us a little girl and that she had her mother's LaMancha ears. I left Rialey to do the dirty work of kid cleanup while I went back to make sure momma was OK. Gwen seemed exhausted but relaxed and not at all upset about losing the kid that she never really knew she had.

A quick note here on the fact that having a dog I can trust with a baby animal like that is a HUGE help. Plus, she did a darn good job of cleaning up the slimy little creature. 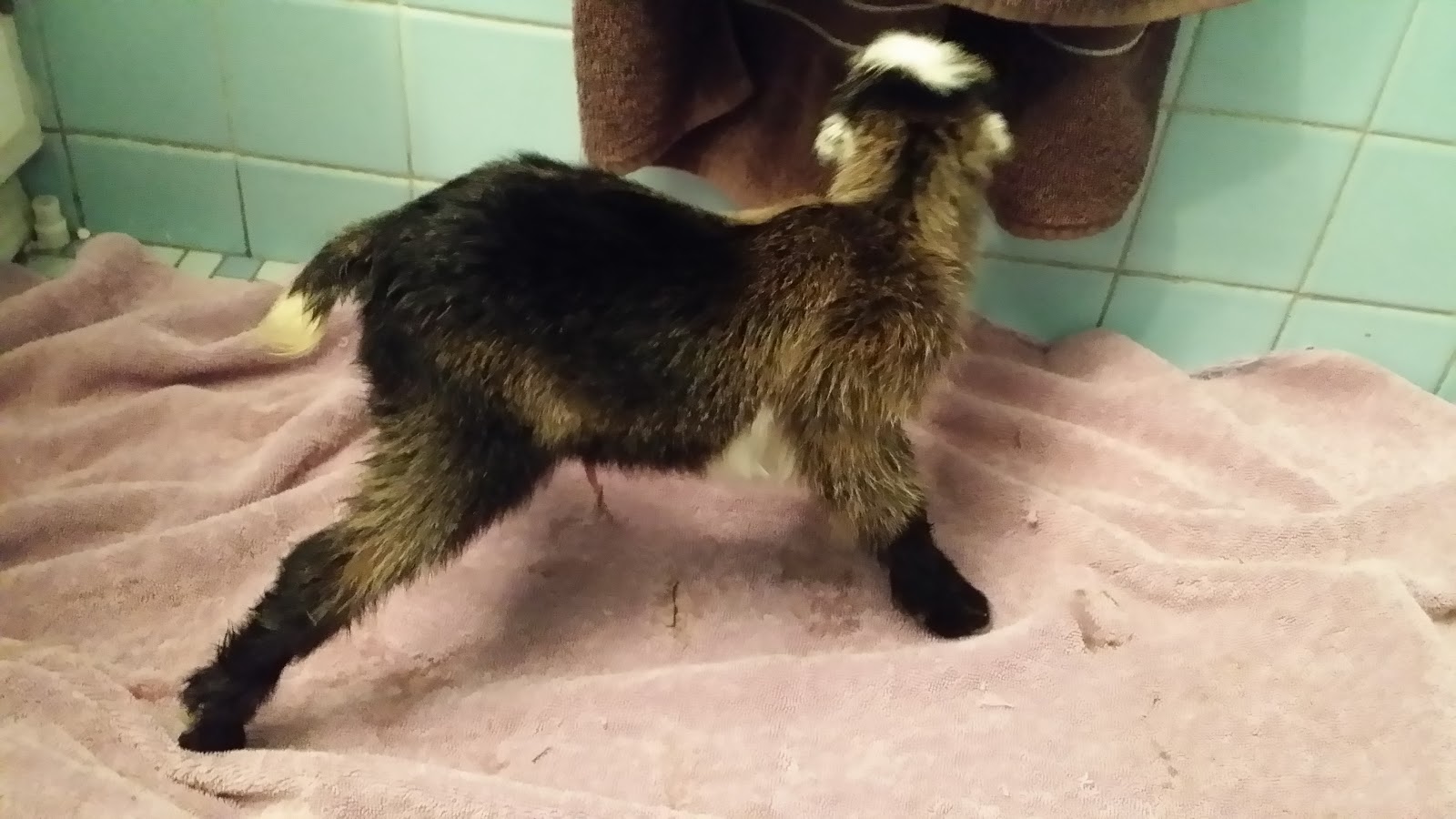 Since Gwen seemed to be doing alright at the moment and seemed to be out of active labor, I bundled up the now mostly clean and dry little one and ran her up to the house. I put her in the bathroom with the space heater running and ran back to make sure Gwen was done. About this time I figured that Big Onion had finally arrived home because I got a text along the lines of "OMG SHE IS SO CUTE!" I let him take over caring for the baby while I sat with Gwen, and we both recovered from the ordeal.

After about an hour, I was pretty confident that she wasn't having any more kids. There were no more signs of contractions, and she seemed very relaxed and sleepy. Being a first time mother, we would not expect her to have more than one anyway. With a little encouragement, I was able to get her up on the milk stand and milk out a small amount of colostrum. Unfortunately, one of the most common symptoms of CAE is udder congestion after kidding, and it looked like Gwen was not going to escape that fate.

After milking, Gwen settled down in the deep hay to relax, and I headed up to the house to check on Big Onion and the newest addition. Big Onion had already gotten a few ounces of powdered colostrum into the baby, but there is no replacing a mother's milk so we got started heat treating the colostrum her mother. While we waited the hour it takes to heat treat the precious stuff, we decided we would call the little one Frankie after Aretha Franklin for her big lungs and the fluffy fur on her head.

Big Onion voluteered to go out and check on Gwen and finish up the few chores I didn't get to in the excitement of finding our girl in labor. He had only been gone a few minutes when I heard the back door open and him shouting, "Kaela, come and get this! Gwen had another one!" and he shoved a soggy, slimy little beasty into my arms and headed back out to make sure Gwen didn't have any more surprises!

It was another little girl marked almost just like the first only with her father's Nigerian Dwarf ears! She looked like a little donkey! We are calling this one Geogie after Curious George since both girls sound like tiny chimps when they talk. This is especially funny to me as I often call Gwen my Monkey Face as a pet name. 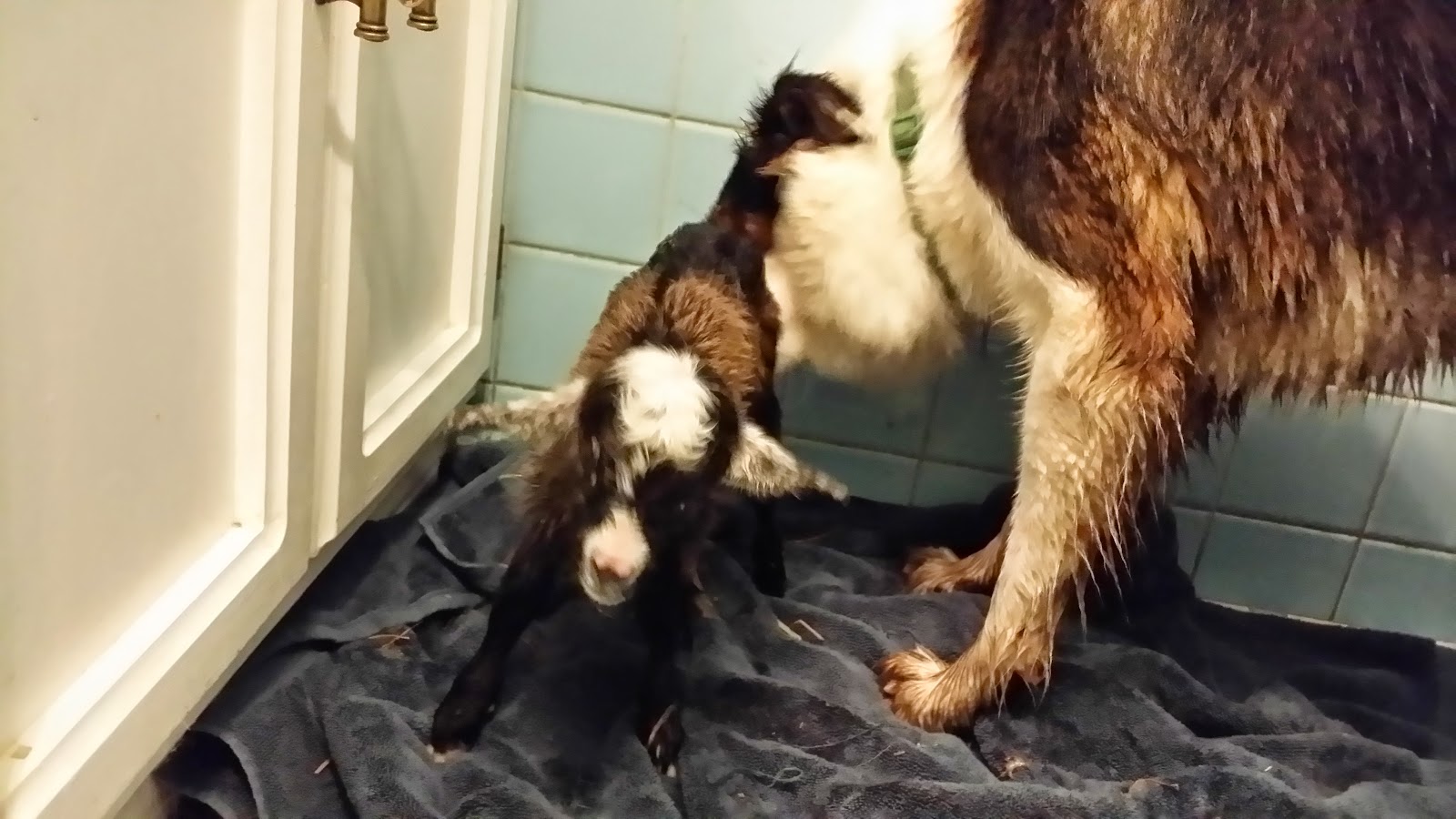 The second girl was much smaller than the first and while we don't think that she had a chance to nurse from her mother before Big Onion found her, we had a heck of a time getting little Georgie to take a bottle, but that's a story for another blog post. For now, suffice to say that both girls are beautiful and sweet, healthy and active and pooping and peeing all over our kitchen!!

(Sorry for the poor quality of pictures with this post. In all the craziness, I didn't have a chance to grab the real camera. Promise there will be better pictures of these sweet babies to come!)
Posted by Kaela at 1:35 PM