Last year we put a breeding harness on our goat buck, Gimli, so we had a pretty darn good idea when the girls were going to kid. This year, I did make note of when we exposed all the various girls to our two boys, but didn't have exact dates when the deed occurred. This has made for some interesting speculation as to when the girls will decide to have their kids. Even after all these years and all these kids, the girls still manage to confound and confuse us. You can look at udders, check for swollen vulvas, and feel for loosened ligaments, but at this point, I'm pretty firmly convinced that the only way to know for sure if a doe is about to kid is if there's a little hoof sticking out of her backside!

We had been waiting and watching Eve for a couple weeks sure every night that the next morning we'd find her snuggled up with a new kid or two. No dice. So one day when I was out on the lanai putting in a load of laundry and I saw the girl standing oddly and squatting in the middle of the pasture, I had the thought that maybe, finally it was her time. Then I heard her. Eve is normally a very quiet goat, but the yell she let out let me know something was absolutely happening!

I ran back inside yelling at Big Onion that I thought Eve was in labor as I flew past, threw on my boots and sped out the back door! 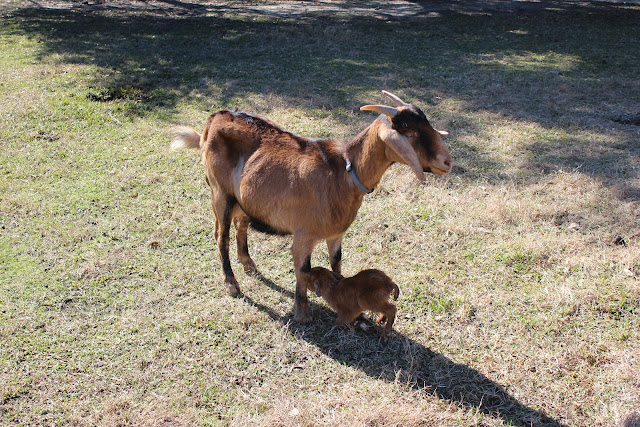 By the time we'd reached her, Eve was standing in the middle of the pasture with a soggy little red thing at her feet. As to why Eve chose to give birth in the middle of the pasture instead of inside the safety and security of one of our many buildings on a sunny, but very chilly day, my only guess is that Eve has some pretty significant rear end weakness. We think she was injured by another goat (Josie!) when she was young and suffered some spinal damage. She gets around just fine, but watching her closely and it's pretty obvious that the girl doesn't have full function or feeling back there. Best guess is that labor just snuck up on her before she could find an appropriate spot to do it! 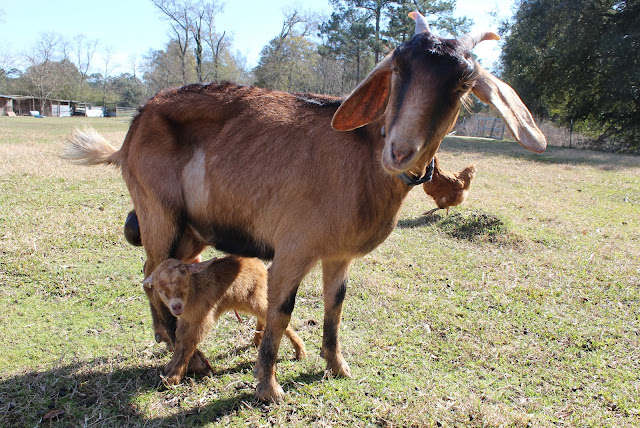 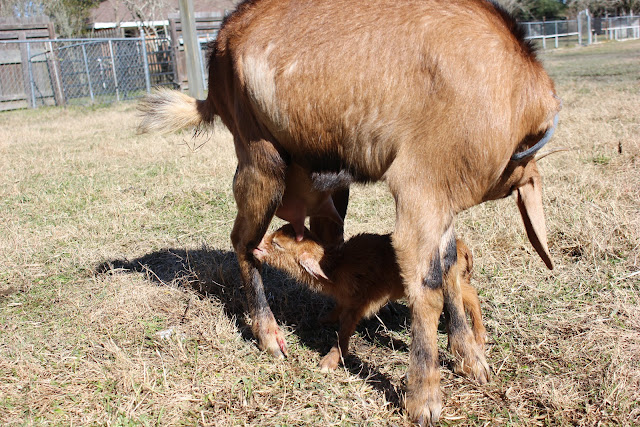 I ran inside and quickly grabbed a couple towels. We got the little girl as dry as possible and before we knew it she was up on her feet and trying her best to nurse. 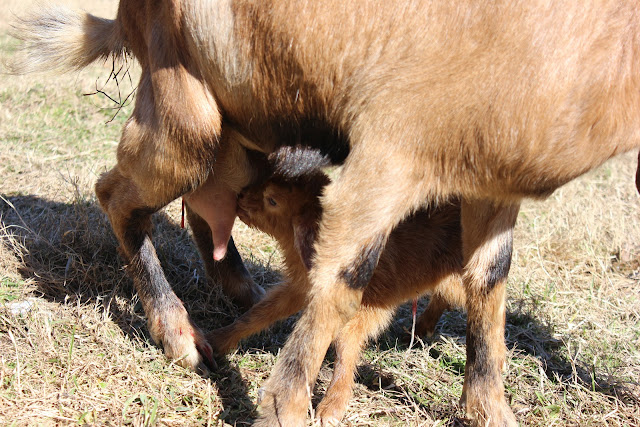 Unfortunately, trying to nurse while you are a soggy, wobbly, one hour old infant kid is not the easiest of tasks, especially when your mother doesn't have the good sense to hold still long enough for you to find and latch onto your target. Big Onion ended up grabbing a cupful of grain just to keep Eve distracted and still long enough for her little girl to get fed. 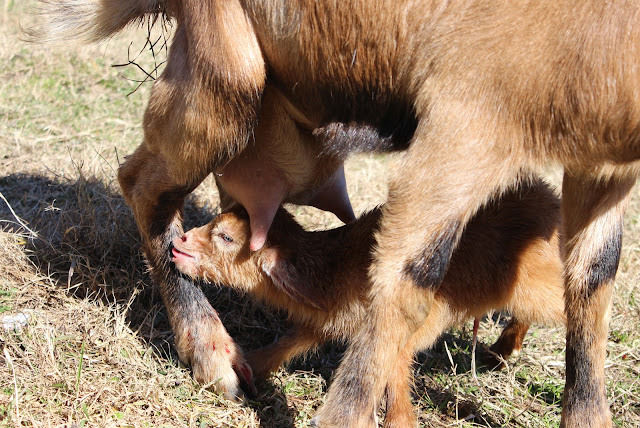 The poor thing kept trying and just totally missing her mom's teat, but the instinct is strong in these little ones and this doeling was not going to give up. 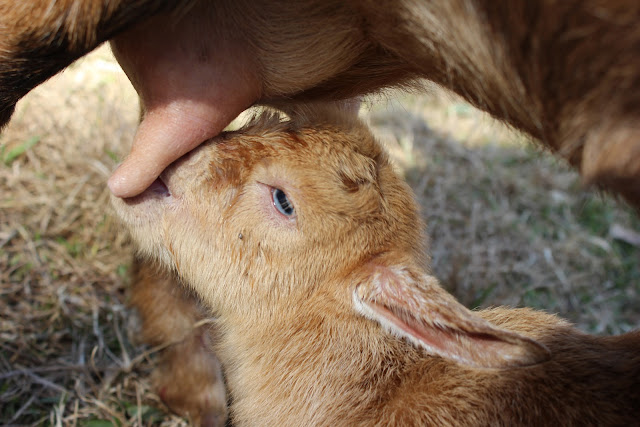 Finally she found her goal and figured out how to get it in her mouth. We all breathed a sigh of relief as the little one had her first meal. 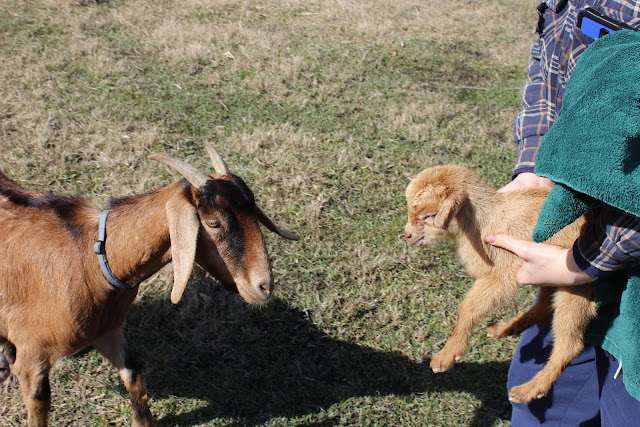 Her belly full, it was time to move mother and daughter to a more secure location so that they could bond properly and get some rest in peace. 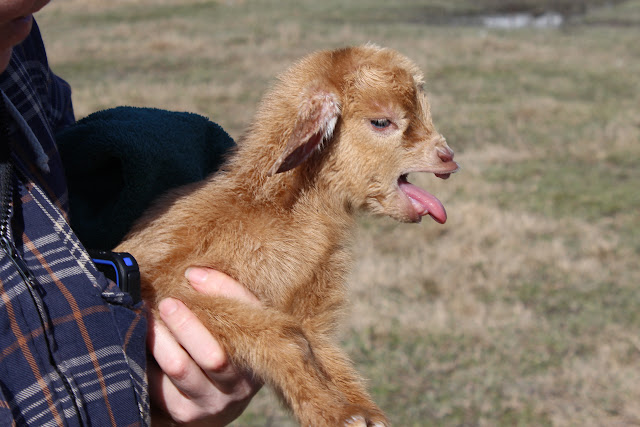 I've mentioned before on this blog how baby sheep and their mothers react to being carried. Basically the lamb goes limp and decides that today might as well be a good day to die while mother, as soon as the lamb rises more than a a few inches above the ground, ceases to recognize the thing as her child at all and generally decides her lamb as vanished into thin air even if the thing is right in front of her face!

Well, let me tell you that baby goats could not be more different. Pick up a newborn goat and it is going to yell and scream and kick its little heart out. Meanwhile mom is probably going to be trying to mess you up or at least get as close as possible to her distressed little one. 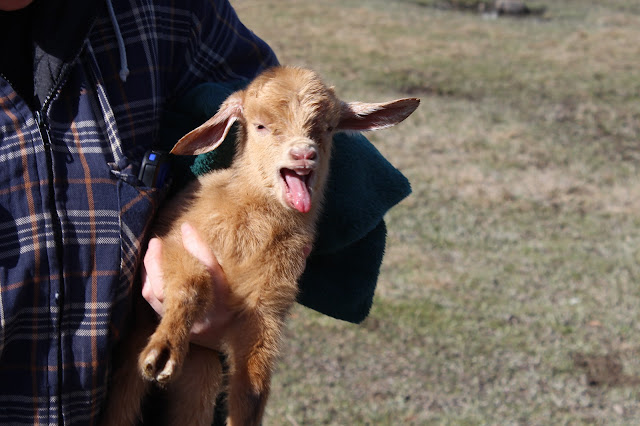 This little one was not pleased with being made to "fly" across the pasture and she let us know it in no uncertain terms! Meanwhile, her mother practically crawled up my backside to stay near to her little one. 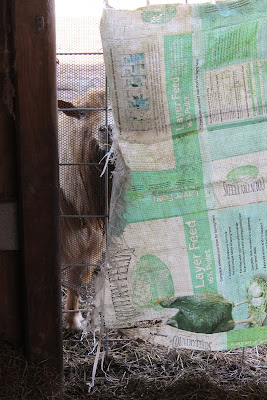 Soon we had Eve and her kid tucked into a cozy pen with lots of hay for mom to munch on and baby to snuggle down for her first nap in the big, new world. The proud father, Gimli, looked on from the pen next door. 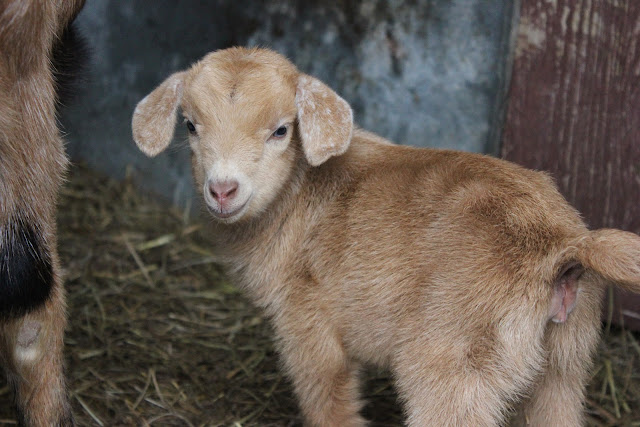 We decided to call this little blue eyed darling Rutabaga since she reminds us so much of her older sister, Turnip. She actually already has a new home lined up where her name will most likely be Mayberry so we've been compromising and calling the girl Rudy-May at least for now. She a little spitfire full of sass and attitude with the other goats, but still just as sweet as can be with us. At the time of this posting, Rudy-May is a little over a month old and doing great!
Posted by Kaela at 9:38 AM