Every Sunday morning, Big Onion and I with the help of Rialey, our trusty English Shepherd farm dog, gather up the entire flock of sheep a quick round of heath checks. We check and make note of FAMACA of all adults and older lambs then deworm anyone who has a low score, a poor body weight, or obvious evidence of loose stool. Right now with so many young and nursing lambs on the ground, we also check weights on all the babies to make sure they are growing at a good rate and do not have any signs of diarrhea or other issues. 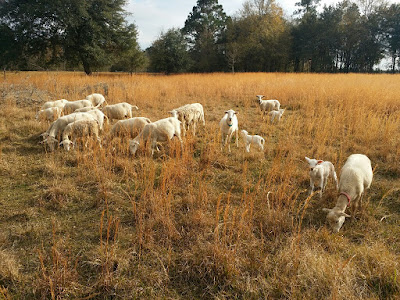 Last Sunday morning, we were gathering the herd as usual. I went out with Rialey while Big Onion called the sheep while shaking a noisy can of corn. Usually we can get the entire flock into our holding area with very little stress on them or effort on our part. At this point, everyone knows the drill. This particular morning, Rialey and I had moved the flock up from the second pasture and across the bridge. We were getting ready to send them Big Onion's way when I saw movement back down the hill and heard the telltale cry of a new mother sheep. Since Big Onion seemed to have the rest of the flock under control and I knew we still had a couple of ewes ready to lamb at any minute, I called Rialey to come quietly to my side then asked her to stay with me while we went to investigate.

Crossing the bridge, I saw Louise calling and calling and torn between running to join the rest of the flock and leaving a sodden, pathetic little lamb who barely seemed to be on its feet. Back on the hill I saw a very fresh afterbirth. I was obvious that Louise had lambed very, very recently. I sent Rialey off in the opposite direction of the new mother then dropped her into a down so as not to spook her away from the lamb then slowly approached mother and child. Talking to her quietly, I scooped up the little lamb, too small and feeble to run away and tried to get Louise to follow me back across the bridge and into the first pasture.

Louise responded as mother sheep often do. She acted as though I had just performed the most amazing of magic tricks before her eyes and made that lamb disappear into thin air. Before I could blink or even drop the lamb low enough so that she could see it, she had taken off in a random direction at high speed, all the time calling her lungs out for her missing little one.

Rialey, reading the situation, swept into action and starting herding momma back towards me. With soggy lamb in hand and a distressed mother sheep darting around then being constantly redirected by the dog, all four of us eventually made our way back into the first pasture where I finally managed to get a hold on Louise's collar and shoved the lamb into her face. Magically the lamb reappeared into her reality and with my pulling, Rialey's pushing, and the drive to stay near her new offspring, we eventually got mother and child settled into a pen. 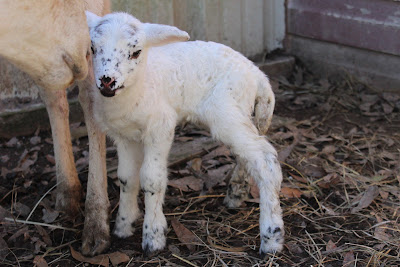 Meanwhile, poor Big Onion had been trying to handle the entire rest of the flock sans help. While we were trying to move Louise, I could hear him calling to Rialey to come and take her usual position to hold the flock in place. At the time, I made it clear to Rialey that she should disregard that order and help deal with the more pressing situation. I hoped Big Onion would understand. 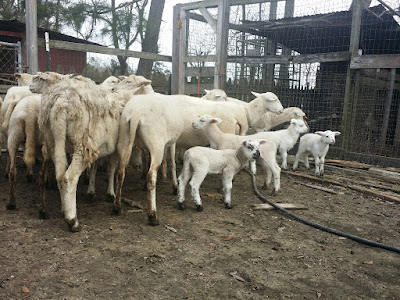 Once we finally had Louise and what turned out to be her daughter firmly secured in the safety and privacy of a pen, I sent Ry around the corner to go and help her dad. Right at that moment, a much older lamb came sprinting around the corner! One of Fancy's lambs, Dakota, had seen an opening and with no dog to stop her, made a break for it!

Rialey saw the lamb then looked at me for direction. I signaled her to try and herd it back to the rest of the group, but lambs are notoriously stupid under pressure, and the confused baby just would not take direction from the dog. After dog and lamb had run in circles for a couple of minutes, I gave Rialey to go ahead to "get it." That is Rialey's command to actually use her mouth and feet to catch a runaway animal.

This is certainly not something I would trust most dogs, even well trained herding dogs, to do without causing injury to their intended target so although I trust Ry not to intentionally harm the stock, I stayed as close as I could and kept a watchful eye for her herding drive to turn to prey drive or for her to get carried away and use too much force. After the "get it" command, Rialey had immediately switched tactics and started actually putting her mouth on the lamb. At a few weeks old, that little girl had some serious speed! I watched Ry trying to grab her very gently by the elbow, never putting enough pressure to cause injury. When she'd slowed the lamb enough, she would try to put her entire mouth around the back of the lamb's neck and press it to the ground.

Dakota was particularly keen to elude capture so neither of these techniques seemed to slow her enough for me to make the catch. Finally, Rialey reached under the running lamb and grabbed the opposite elbow, this caused the lamb to stumble. While I hustled up to catch her, Rialey gave the lamb one more good nose punch in the side which rolled her right into my hands! I checked her over quickly and found that though she was winded and scared, there wasn't a scratch on that baby. Rialey had used just enough force to take her down without causing a speck of injury! What a good dog! 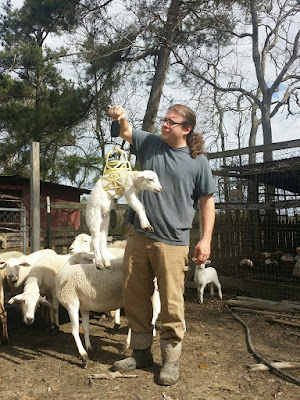 Dakota in hand, Rialey, the lamb, and I finally went to join Big Onion and the rest of the flock where after catching our breath, we did our usual health checks on the flock. I'm happy to report that no one needed deworming and all the lambs were showing very good increases in weight.

That job finished, we all went back to check on Louise and her new baby. I knew the baby was little when I'd originally picked her up, but when we found her to be well under 5lbs we began to suspect that she might one of twins. Big Onion, Rialey, and I made our way back out across the bridge now on a mission to search for a potentially lost little newborn lamb. Rialey paused at the afterbirth still sitting wetly on the top of the hill hoping to make a second breakfast of the farm dog delicacy, but at one word from me, she left it where it sat and started sniffing around for the missing baby.

While we stomped around the tall grass losing hope at the amount of ground we'd have to cover to try and find a tiny and potentially dead baby sheep, Ry dropped her head and took off at a run to the back pasture. I figured she was just going for a run or perhaps wanted to take a quick dip in the ponds, but when I say her floof of a curled and fluffy tail come up, then her head pop up as if to say, "Hey guys! Come look!" I knew she was onto something. It took us a minute to catch up, but when we crossed the second bridge and rounded the corner, sure enough, our trusty farm dog girl had tracked her way straight to that baby and stood waiting with her until we could gather her up and bring her back to momma! On the way back, I told Rialey she was more than welcome to enjoy that placenta she'd left behind as a reward for all her great work that morning. 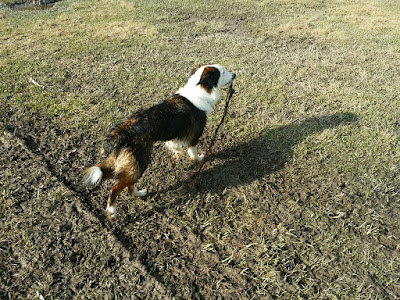 This lamb was also a ewe and was bigger and much more robust than her sister. Luckily, Louise accepted both lambs, and we watched as the two little girls both nursed from their mother. Rialey then helped to clean little lamb butts while Louise got a healthy pile of grain, some fresh hay, and clean bucket of water. Finally we left mother to bond and rest with her newborns and headed up to the house for a breakfast of our own! 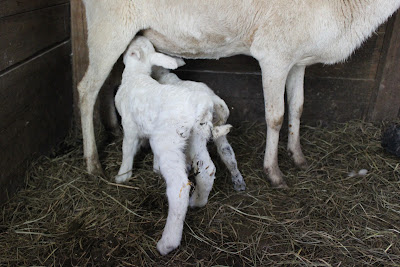