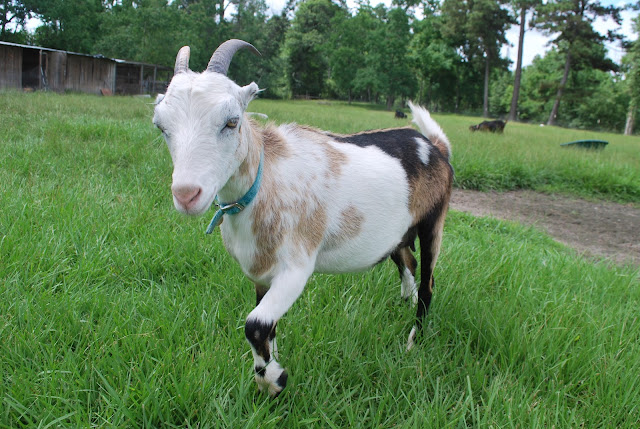 Friday was Gwen's 1st birthday. I remember the day she was born like it was yesterday....


Josie was pregnant and well past the due date we were given when we bought her. We knew we wanted to pull the kids as soon as they were born so we had been on goat watch for a couple weeks. Finally, we started to see the telltale signs of impending labor, a full udder, softening of the area around the tail, and swelling of the vulva. Big Onion and I were taking it in shifts that night, going out every couple hours to check on Josie. Around midnight, Big Onion came in saying that he thought the time was close, that we should check again in a couple hours.

I set my alarm to wake me and wearily dragged myself out of bed when it went off what felt like seconds later. I knew something was different the minute I stepped out the back door to pull on my boots. I heard odd noises coming from the pens so I hurried back there. I saw it when I came around the corner, a tiny little creature laying in the dirt, half wet, and struggling to find its feet. As I crouched down to examine the pretty little thing, I felt a rush of emotion that I'd never experienced before. This was MA BABY, and I had to protect it!! I scooped the soggy, dirty thing into my arms and rushed it back to the house. 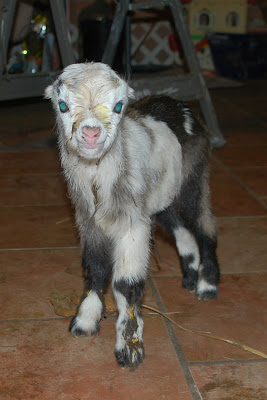 I remember opening the back door to yell for Big Onion just as the little creature let out the loudest cry of "Waaaaahhhh!!" About this time, I decided to check and see what we had. It was a little girl! A perfect, beautifully marked little doe with her mother's tiny LaMancha ears and the biggest eyes I'd ever seen. 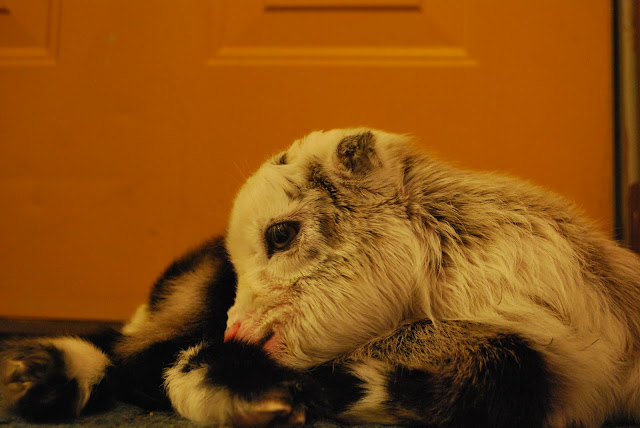 Big Onion went out to keep on eye on Josie to see if she had anymore kids coming and I busied myself trying to get a bottle of frozen colostrum prepared and feed the tiny little thing that was now crying its head off on the porch. I had a heck of a time getting her to latch onto the bottle, but I finally got enough milk in her that she settled down to sleep. As I held the precious little creature sleeping in my arms, the name Gwen, Gwendolyn came into my head so that's what we called her. 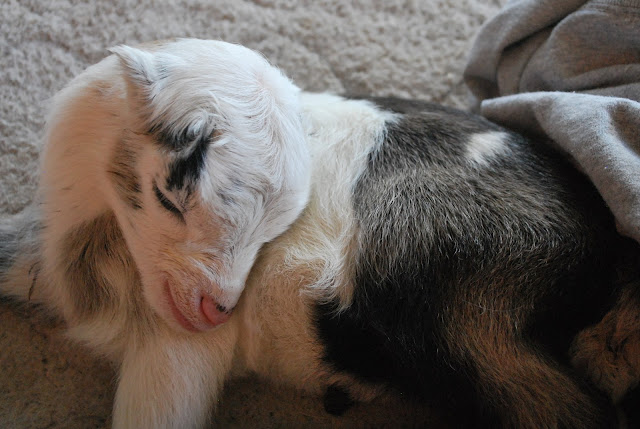 Those first few days were hard, terrible even. I remember sitting with Josie and crying right along with her for her lost baby. Massaging her hard, swollen udder until I felt like my hands were going to fall off. Gwen being so sick those first couple days from aspirating milk during my novice attempts to force the bottle. We really thought we were going to lose her that second day.

But the girl has Josie's fighter's spirit and soon she was running the house. We kept her inside for the first few weeks, feeding her every few hours on her mother's milk that we heat treated very carefully to make it safe for Gwen to drink.

Eventually we got Thea to act as Gwen's nanny. Gwen moved outside, and quickly learned to nurse from Thea while she happily munched away at sweet feed on the milk stand. 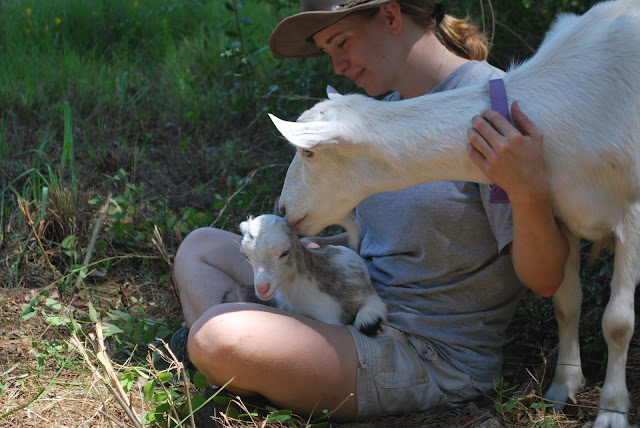 Here are some of my favorite pictures of the girl from the last year... 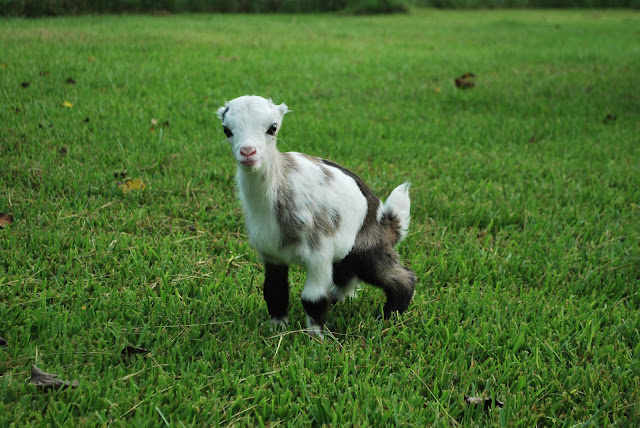 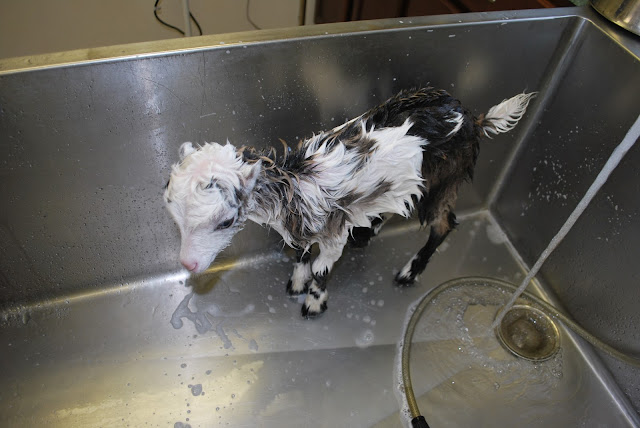 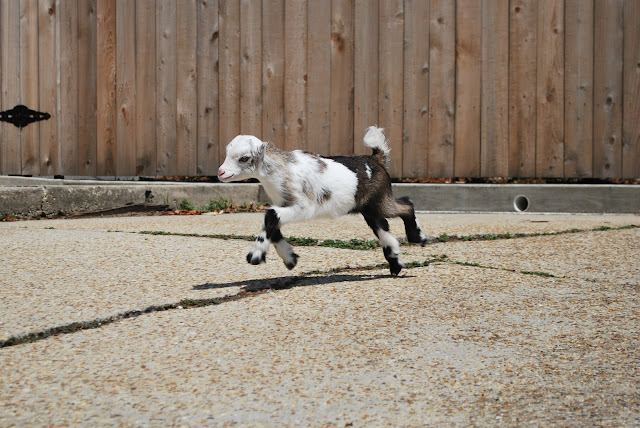 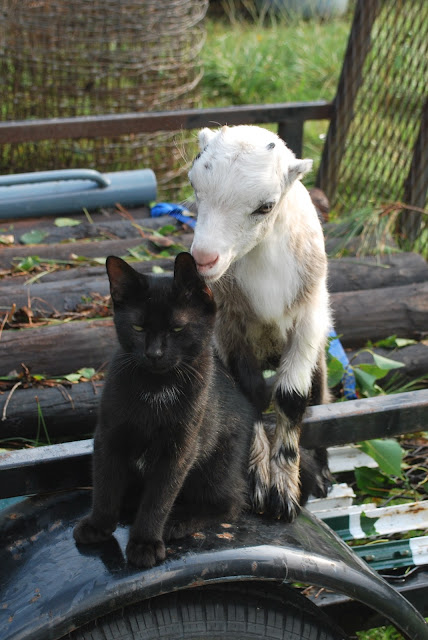 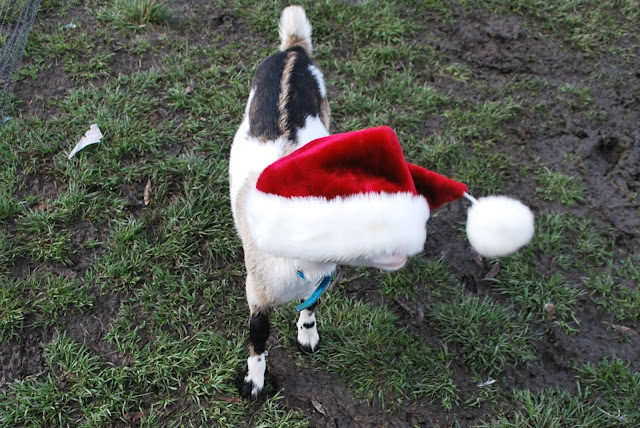 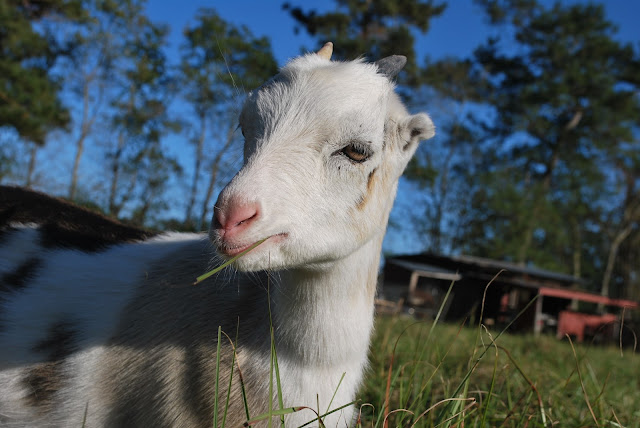 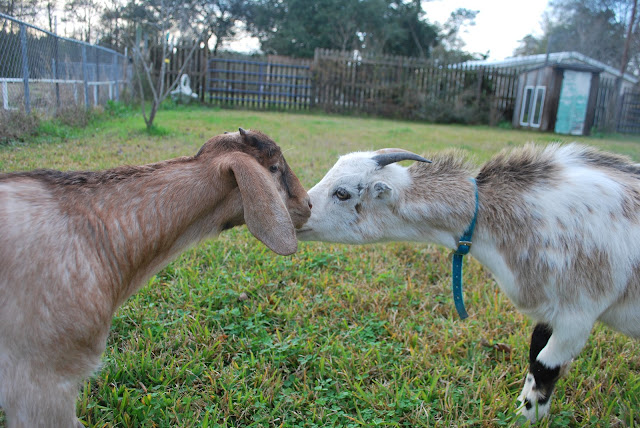 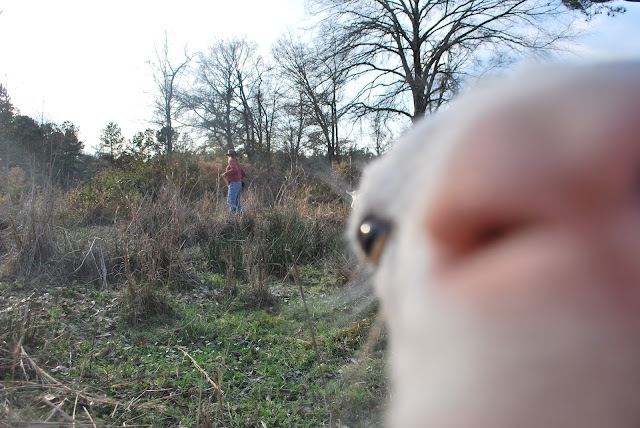 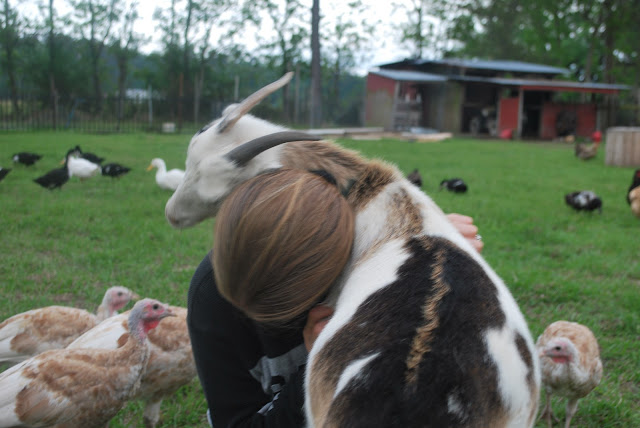 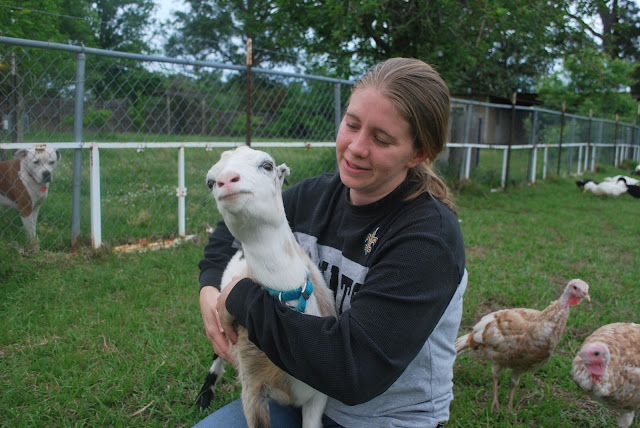 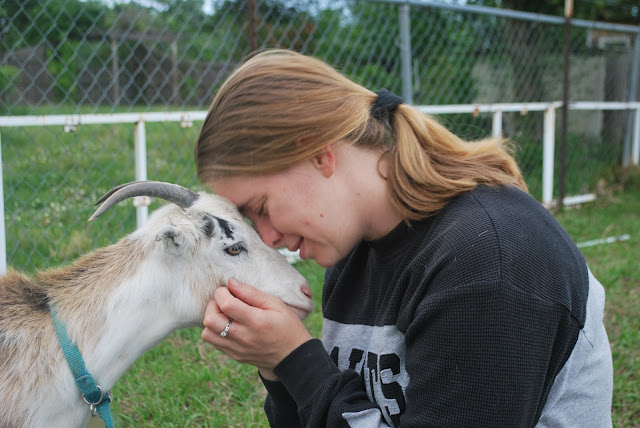 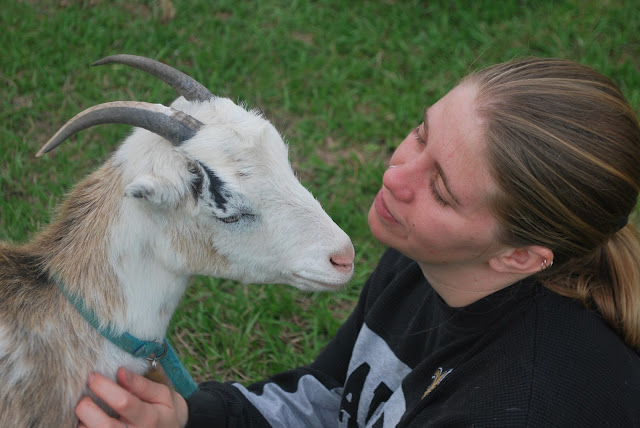 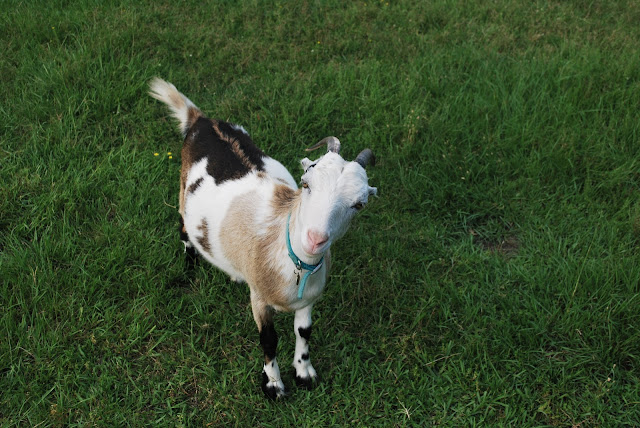 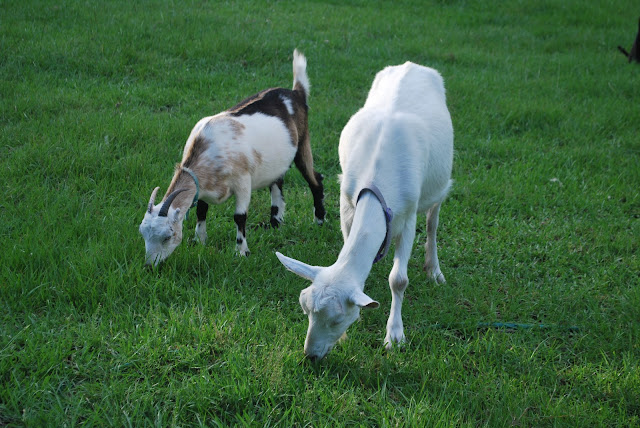 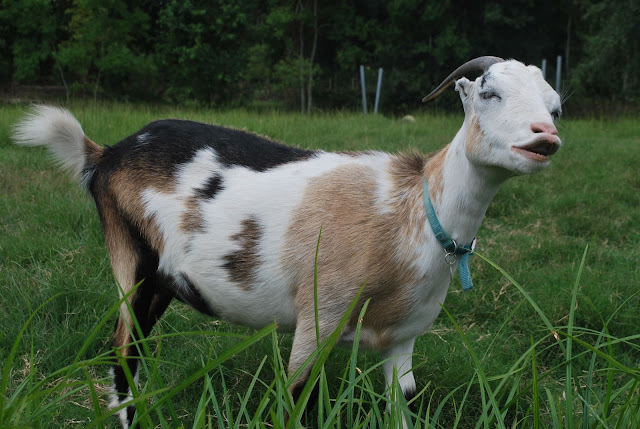 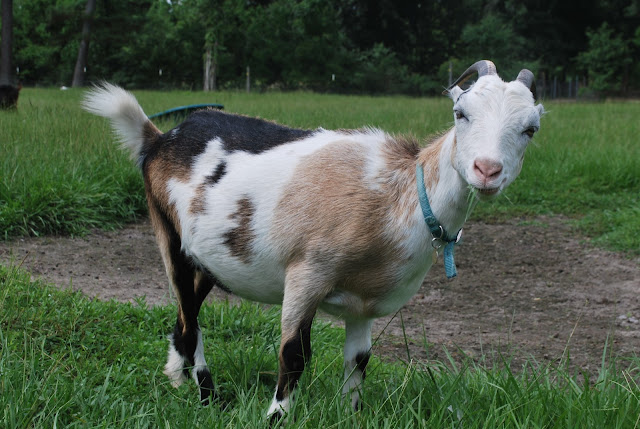 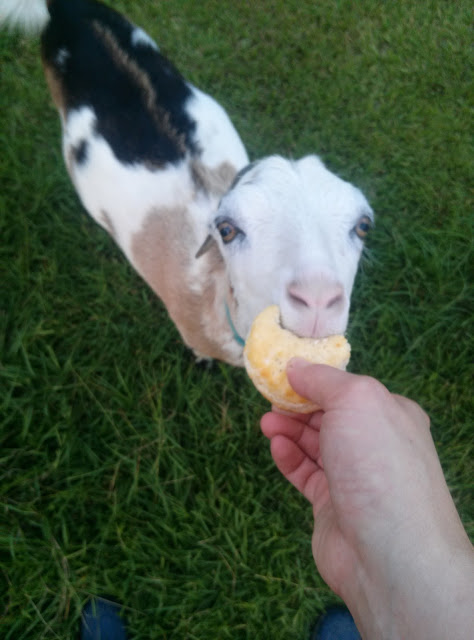 Instead of a birthday cake, I gave Gwen a Popeye's biscuit (because we all know they are awesome). I think she enjoyed her treat!

Email ThisBlogThis!Share to TwitterShare to FacebookShare to Pinterest
Labels: gwen, me, thea