One morning last week Luna and I were headed out to start our morning chores like we always do. It was very early, the sun was barely out, and the pasture grass was still wet with dew. One of Luna's normal jobs is to 'protect' us from the bottle lambs. Without Luna out there, those 7 lambs (who are about 65lbs these days) will do their best to crawl directly up our rear ends while we are trying to work. I sent Luna on ahead down the path to clear out the lambs so I could start letting out the poultry for the day.


She had just taken off at a good clip when her nose swung up in the air and she slid to a sudden halt. She looked back at me, asking if she should proceed with the previous command or investigate whatever scent she'd picked up. I told her go ahead and find whatever had caught her attention. After a year and a half of living and working the farm with her I've learned to listen when that dog has something to tell me.

Luna seemed to triangulate the scent, raising her head to pick it up off the wind then dropping her head down and working back and forth in an smaller and smaller area. She overshot, then backtracked and within a couple minutes she had honed in on her quarry and flushed a tiny bird out of a tall tuft of grass in the pasture. A softball sized blur burst straight up out of the grass and winged itself away from us with surprising speed. It took me a minute to realize that one of our quail was currently flying across the pasture away from me!

I called Luna back and we slowly approached the place where the little bird had landed. Quail aren't exactly the most skilled flyers. They kind of pop up into the air then drunkenly hurl themselves in one direction until gravity or a solid object ends their progress. Luna and carefully approached the loose quail and he made progressively feebler attempts to evade us. Eventually, Luna was able to herd the little guy toward me and I scooped him up out of the grass. 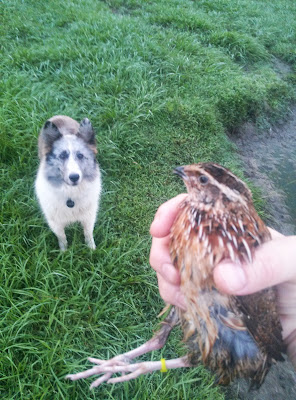 It was obvious the poor thing had been out a while. He was cold, weak, and bedraggled. When I brought him back to the pen, he immediately started chowing down on feed and gulping water.

I'm still amazed that Luna picked up that scent; knew it was out of place in a field that is normally filled with foraging poultry and then helped me herd the little guy back where he belonged. Thanks again, Luna!
Posted by Kaela at 11:02 AM