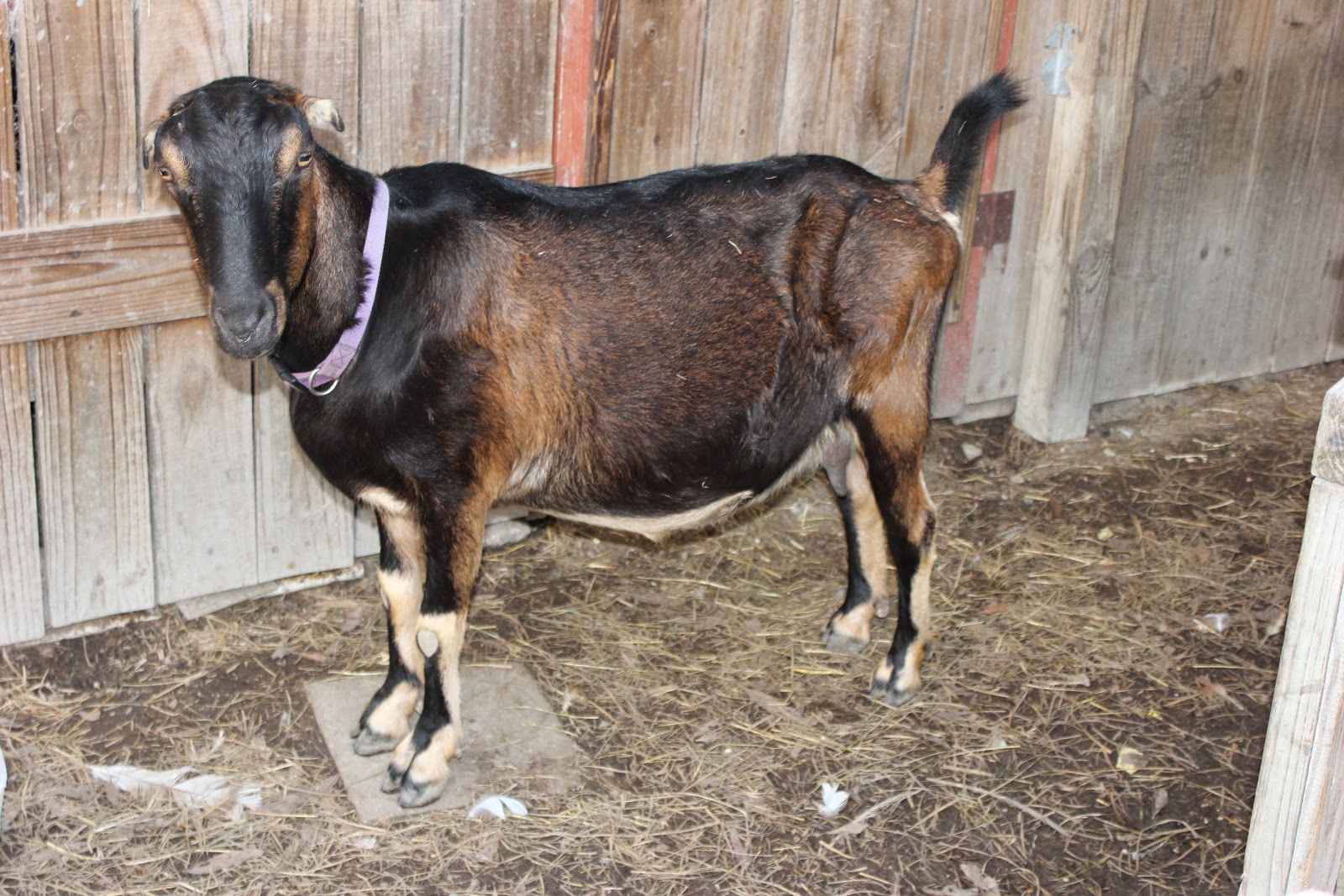 After Gwen and Eve, we knew (or were at least pretty darn sure) that Elanore would be the next to kid. That morning she was being unusually vocal. Her udder had filled up, and I couldn't feel the tendons on either side of her tail - a sure sign that kidding is eminent. 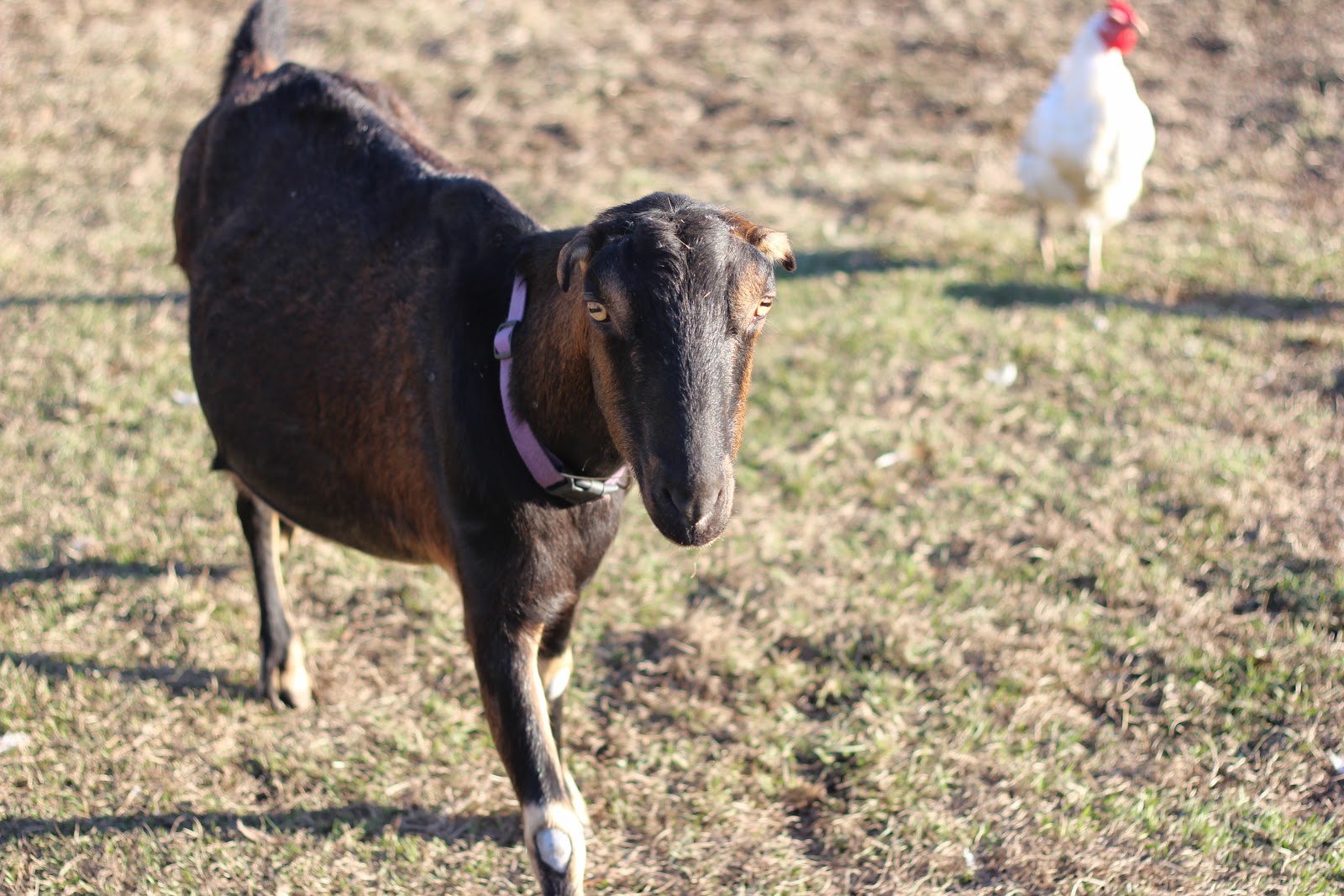 Around midday, I went out to check on everyone and found Elanore sizing up the trash pile that was left here by the previous owners as a great place to have her kids. Looking around at all the potentially sharp and dangerous stuff, I decided to intervene and dragged one very large and very, very obstinate pregnant goat across the pasture and locked her into the goat room. I made sure she had fresh hay and water then headed back up to gather some things. 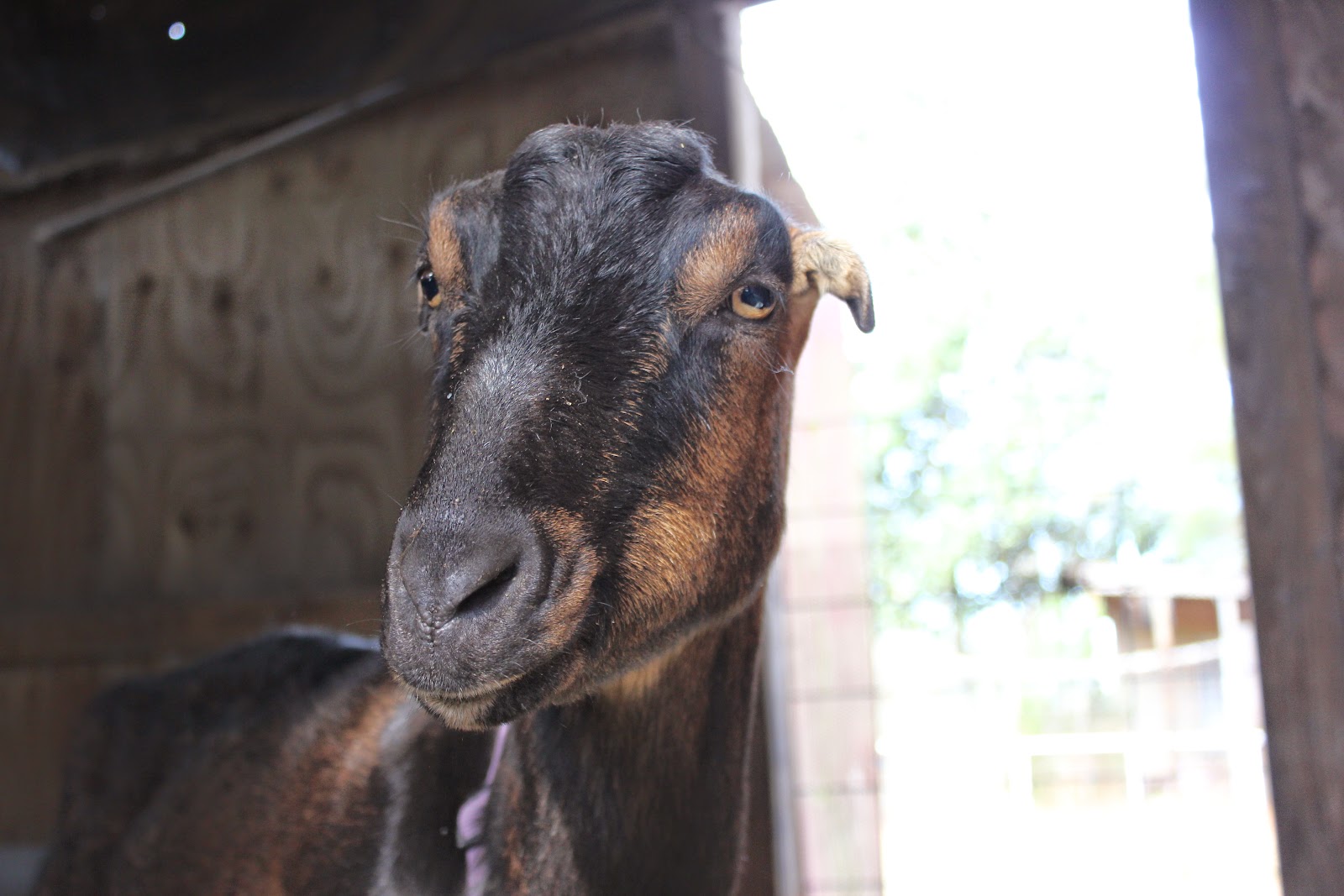 I took my time in the house, grabbing a quick bite to eat and packing up a bag with a couple books, towels, a blanket for me to sit on, and a charger for my cell phone thinking I would be sitting with a laboring goat for the next few hours. 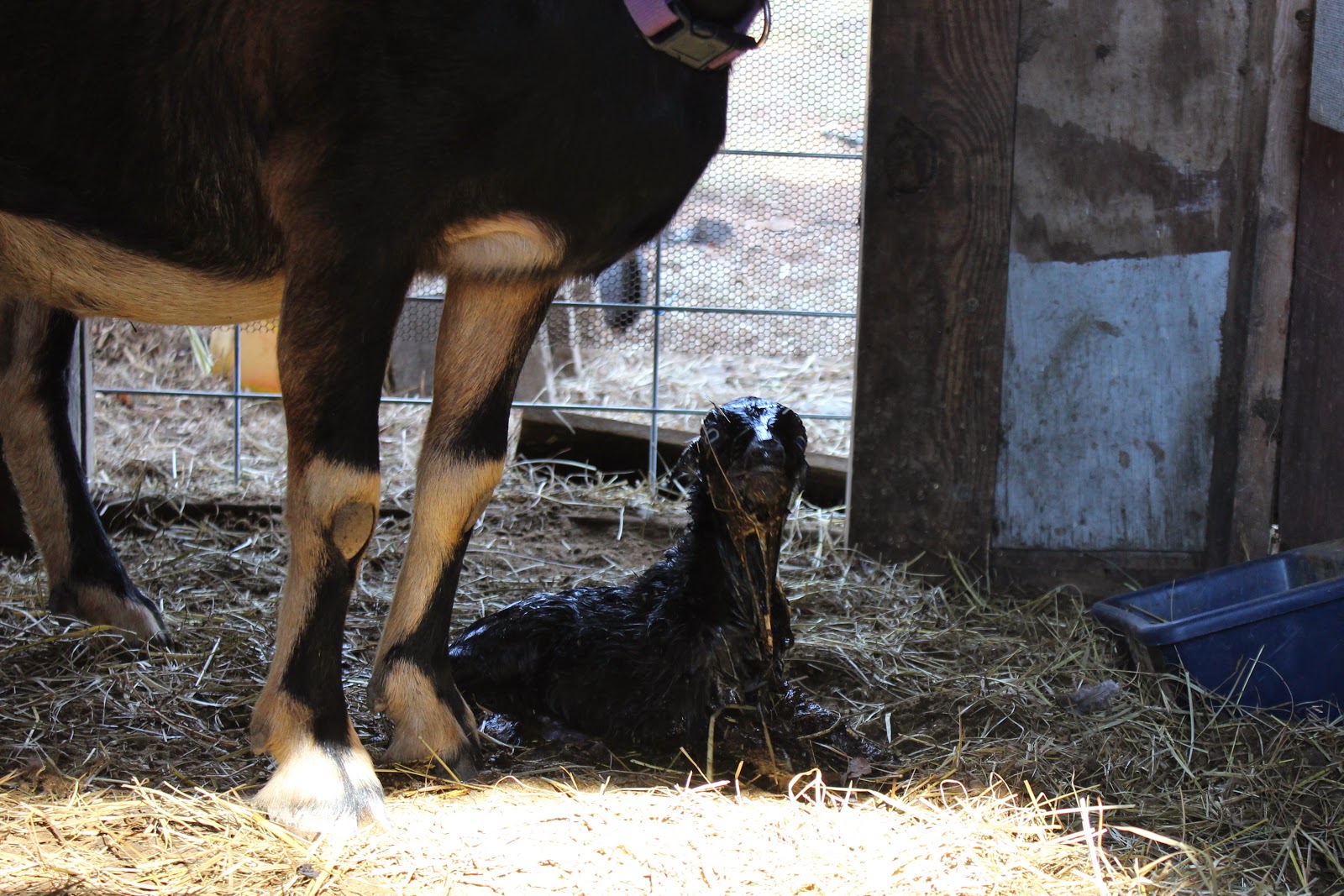 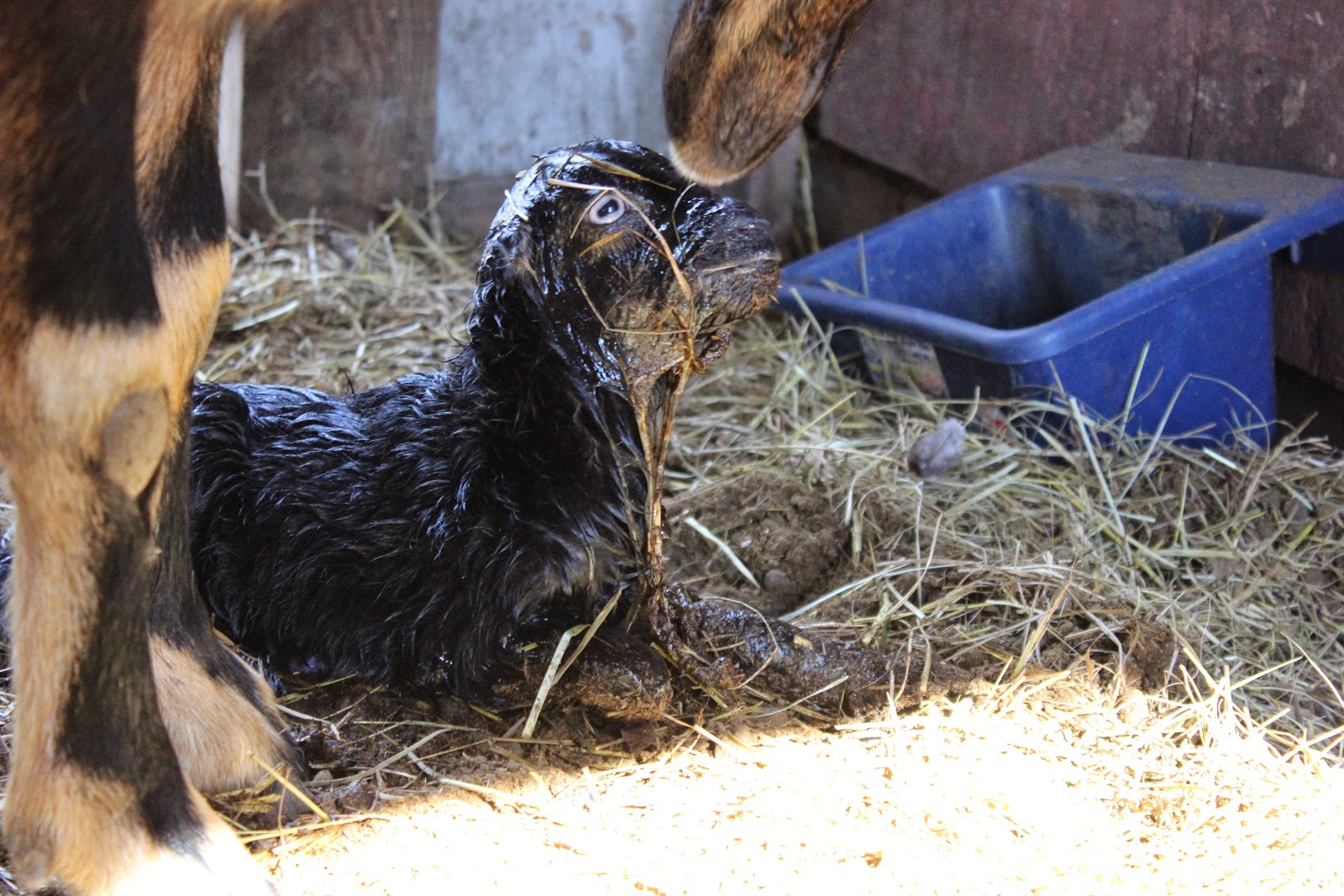 Well, by the time I got back out there, Elanore had given birth to one giant all black buckling! Immediately and for no good reason the name Victor came to mind. While I watched her standing there and cleaning up the buckling, I heard her give a small grunt, saw a bit of liquid splash from her backside then to my shock, another kid came flying out of Elanore and landed in the hay at her feet.

This little boy was much, much smaller than his brother and Elanore didn't seem as interested in getting him cleaned and dried. It was quite cold out so I called Rialey over and had her at least help clear his nose and mouth and start on the dirty work of getting that baby clean. Well, Rialey and Elanore have a very tumultuous relationship. Elanore hadn't even been here a week when she and Ry got into an argument that resulted in the goat needing to get her udder stitched back together. Rialey was a pup at the time and has since learned how to properly discipline the livestock without causing damage, but Elanore has never forgiven her. She took one look at that udder biting wolfdog and lost her mind! She rushed past me faster than I could stop her and headbutted poor Rialey who was totally immersed in caring for her new baby right into the ground!

I quickly got between the angry mother and confused dog and backed Elanore in a corner, then shooed an unharmed but slightly dazed Rialey out the door.

I gathered up a still very soggy little buckling and tried to get his mother to help get him clean and dry. I decided then that the little guy was going to need a tough name if he was going to make it in this world, so I choose the name Bruno. Elanore took one sniff of the dog spit on her baby, turned up her nose, and went back to cleaning Victor. Oh no! How could I be so stupid?! I should have known better than to let Rialey anywhere near that baby. If Elanore wouldn't clean that boy, she wouldn't bond with him and accept him as her own. Now we would have another bottle baby to feed. Crap! 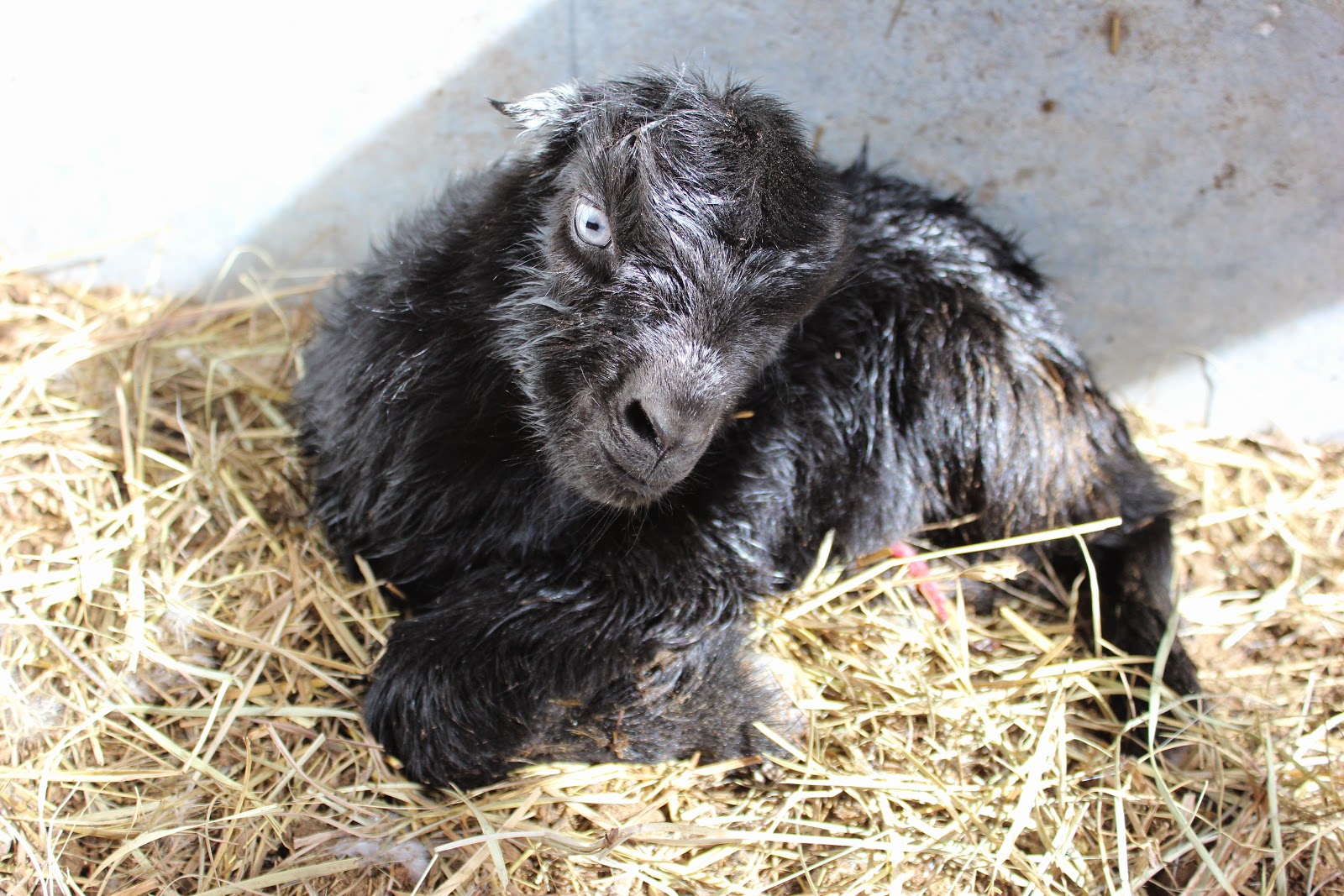 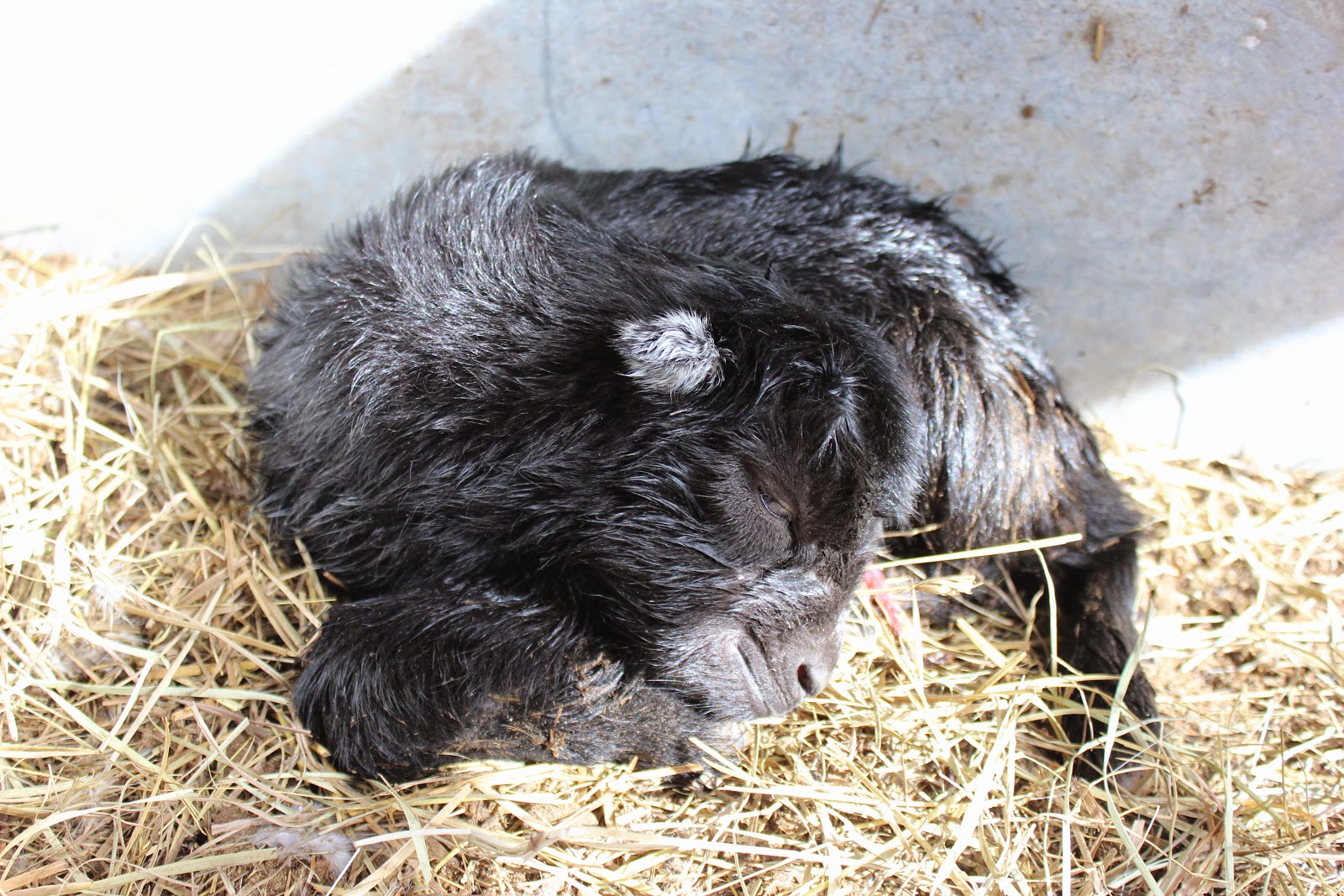 Desperate and cursing my own bad judgement, I grabbed that big black buckling, flipped him upside down and rubbed him all over little Bruno. I then took Victor and hid him behind my back and plopped Bruno right under Elanore's nose. Would you believe it worked!? 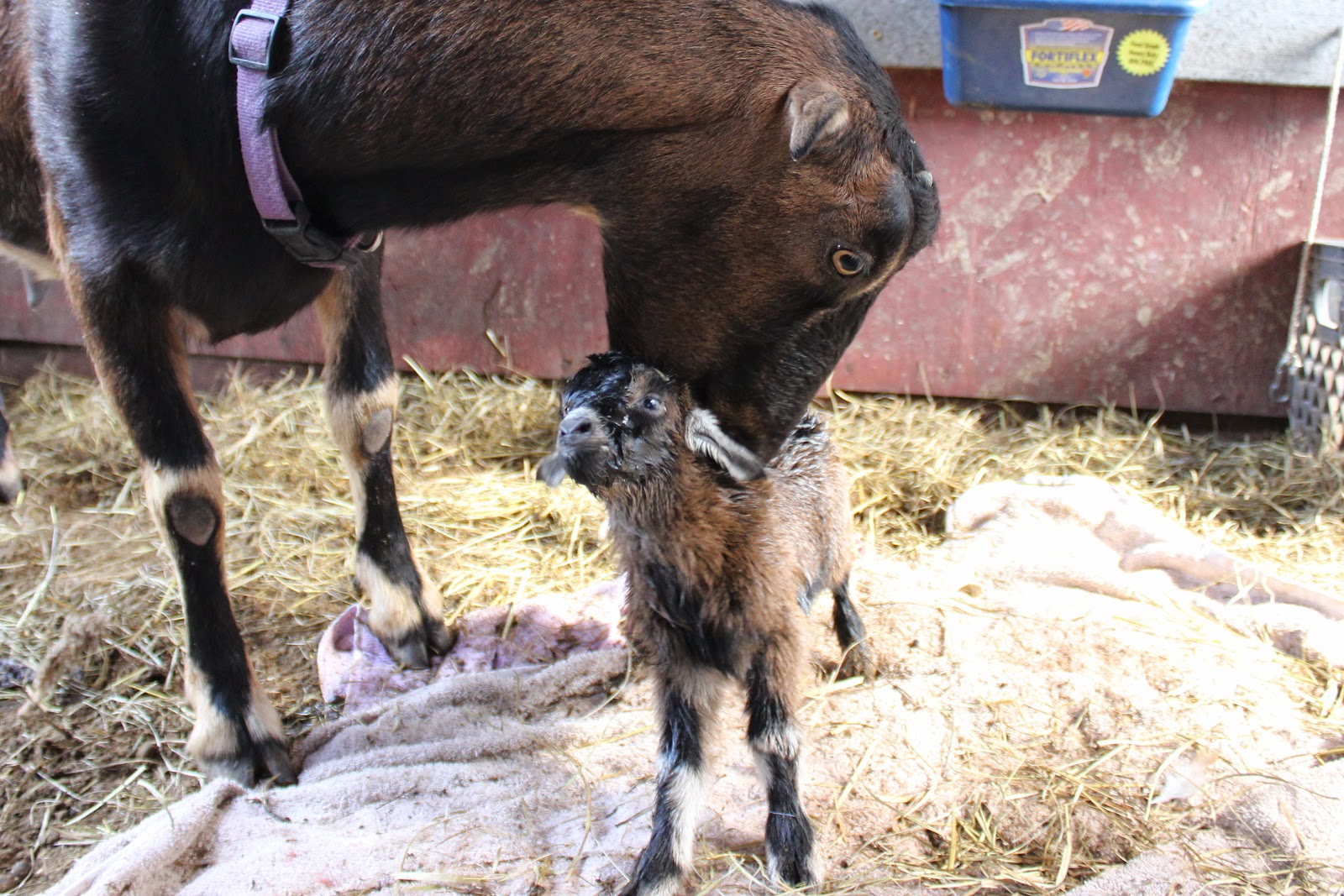 I breathed a sigh of relief as momma started nudging and licking her second son. Whew! It took a while for this little guy to get on his feet and even longer for him to start nursing, but he eventually got the hang of being a goat. The little family unit of three have been inseparable every since. 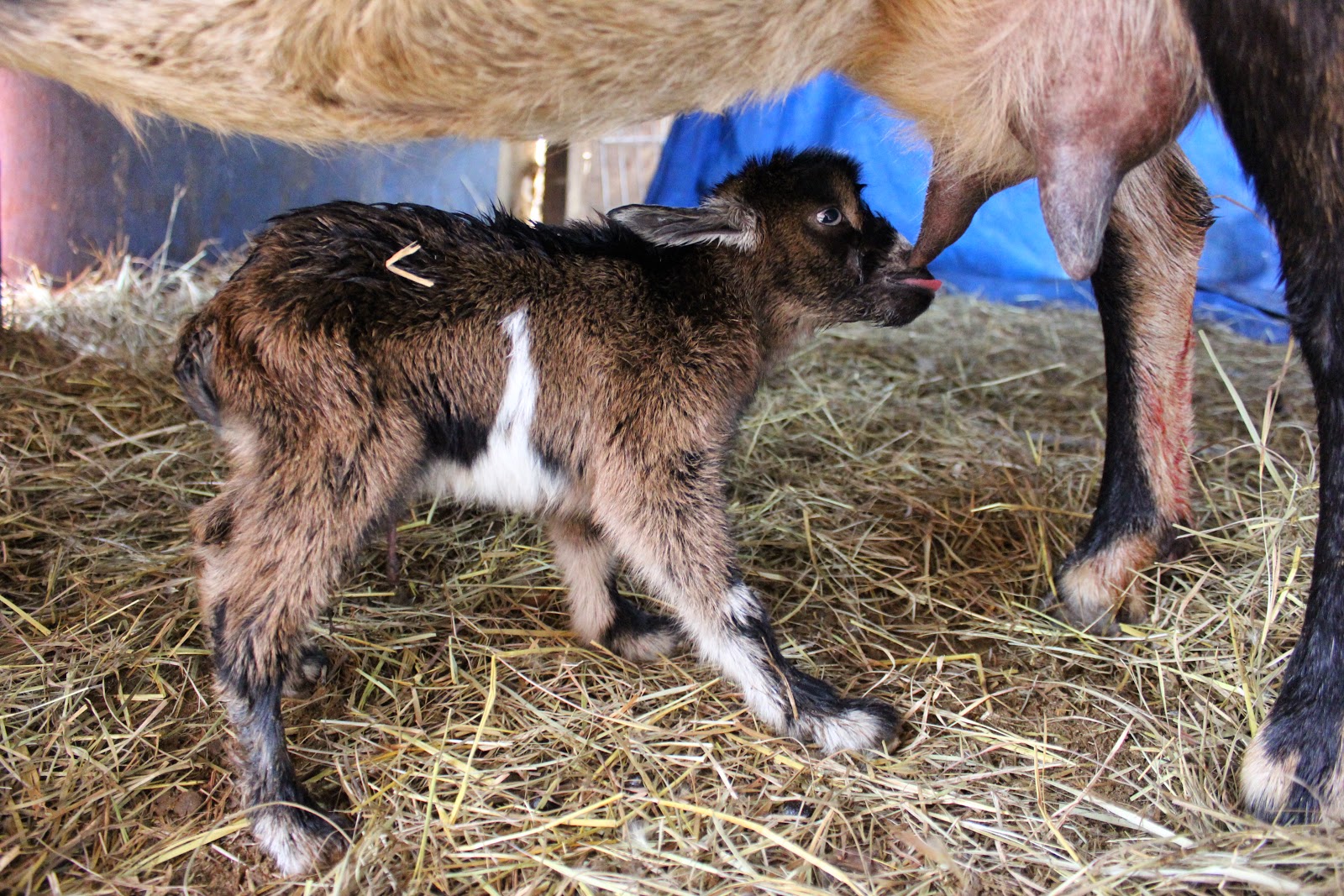 I thought my excitement for the day was over, but as I was gathering my things and getting ready to head back up to the house, I heard the sounds of another goat in labor somewhere nearby. Sounds with which I was getting to be very familiar....
Posted by Kaela at 4:47 PM