Up next to kid was Josie. 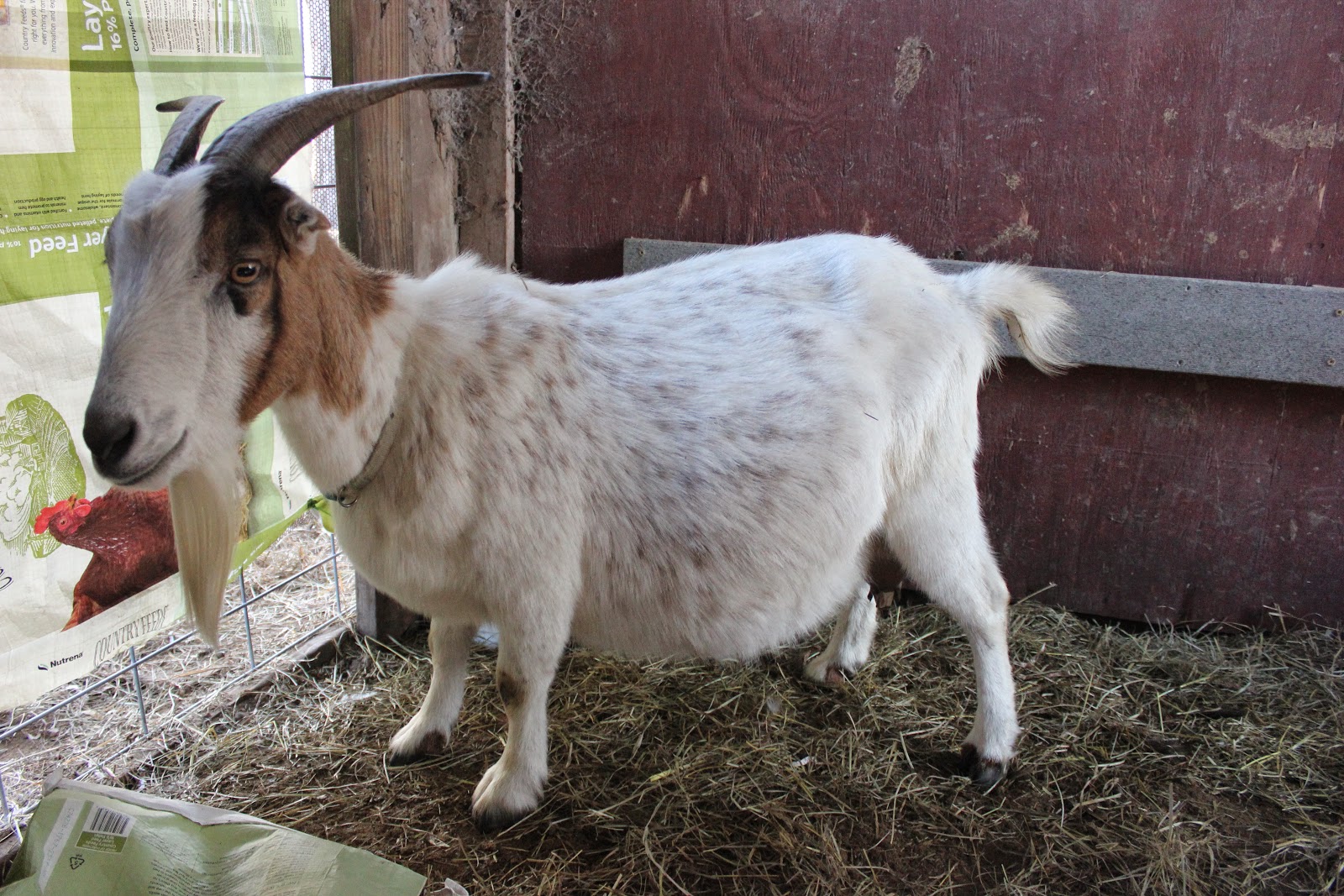 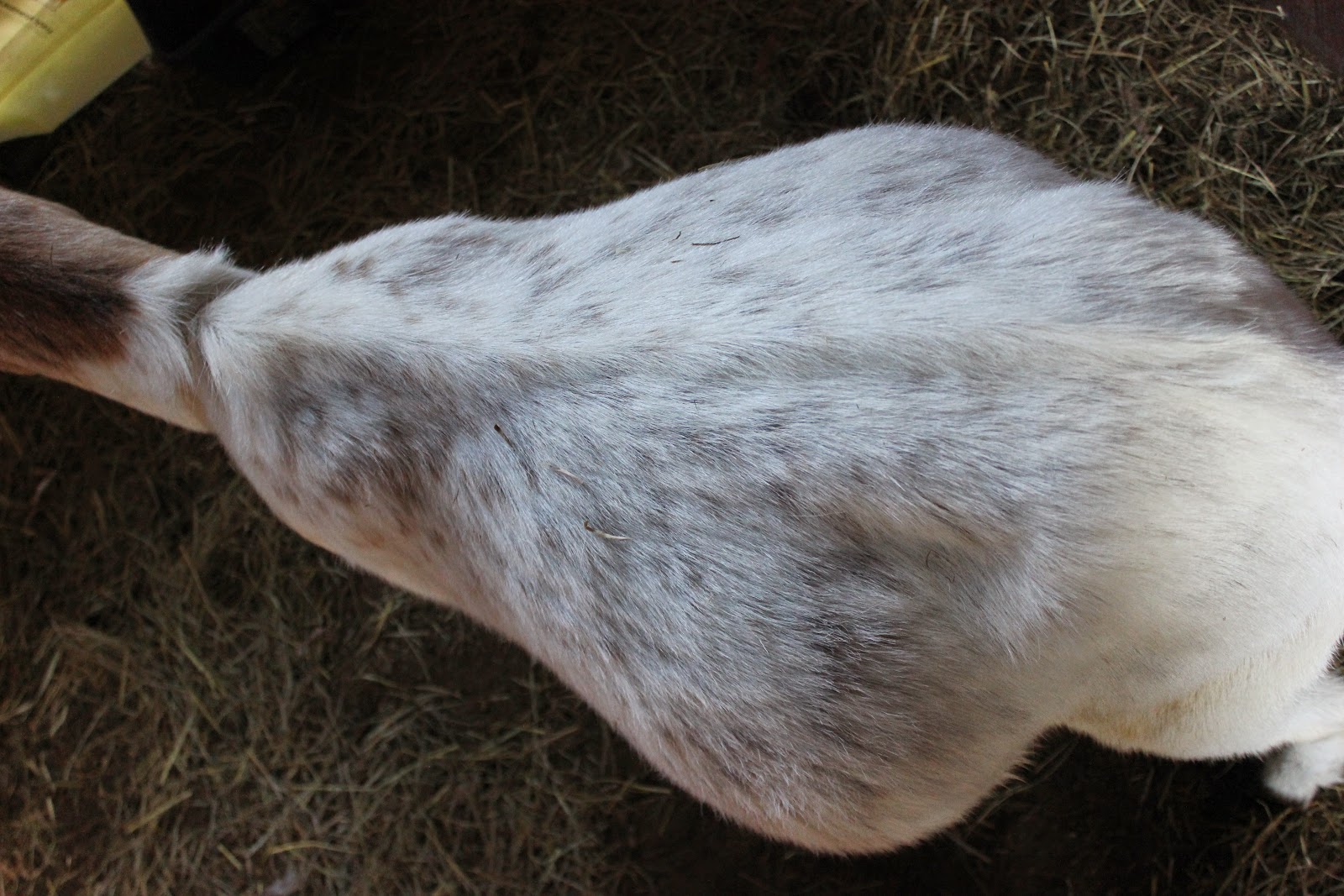 Big Onion was away from the farm at a meeting when Josie started with the early signs of labor. Luckily, I had my best and oldest friend, K, visiting at the time. With the CAE positive girls, we try our very best to be there when they deliver and pull the babies before momma even has a chance to lay eyes on them. This seems to make the separation a lot easier on the mother. Trying to do this without a second person is almost impossible. It means I have to make a choice to leave either the mother or the babies alone while running back and forth to the house with slimy, soggy newborns. My poor friend had no idea what she signed up for when she decided to visit the farm, but boy was I grateful for her help! 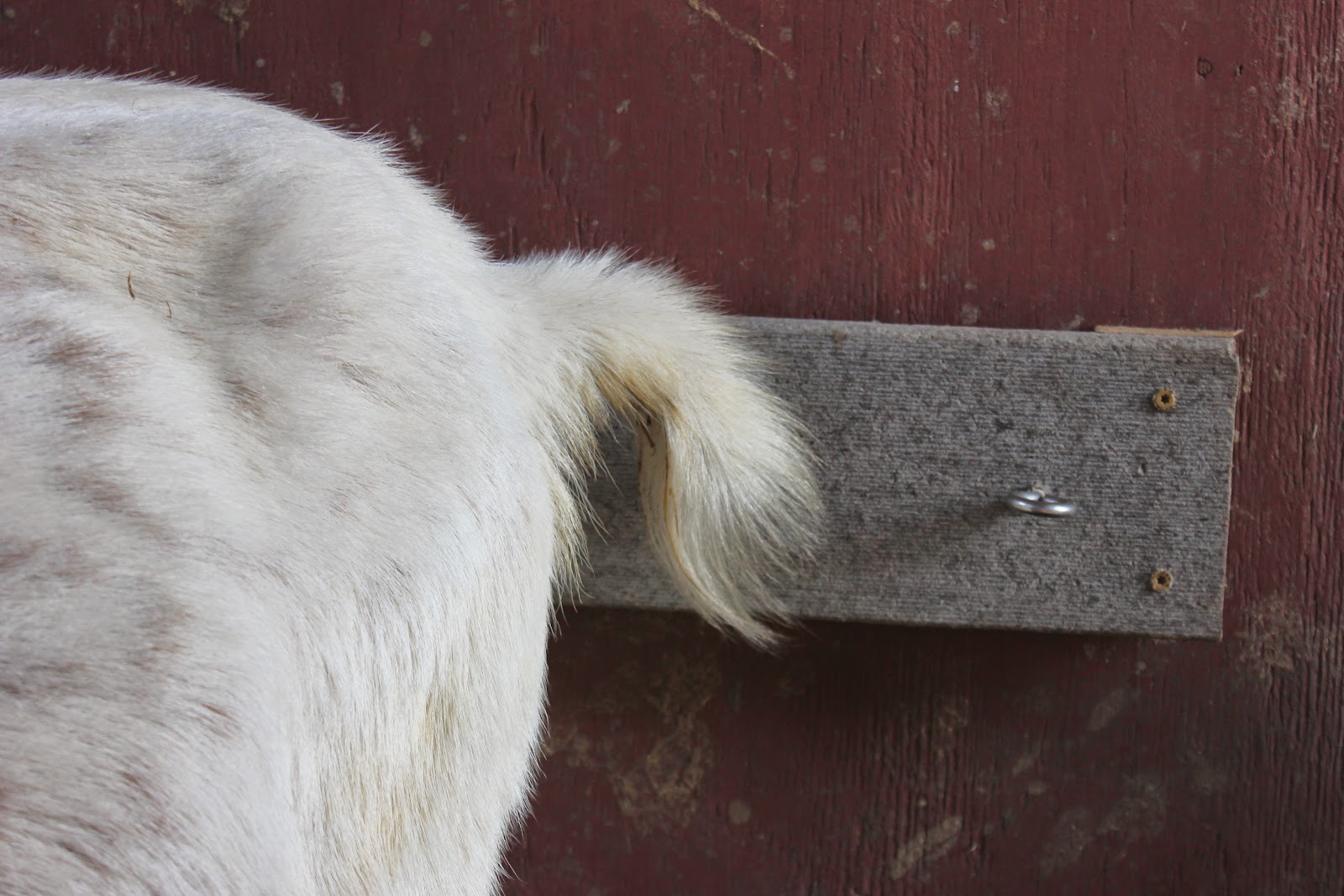 That curled tail is a sure sign that a goat is in labor and experiencing contractions. 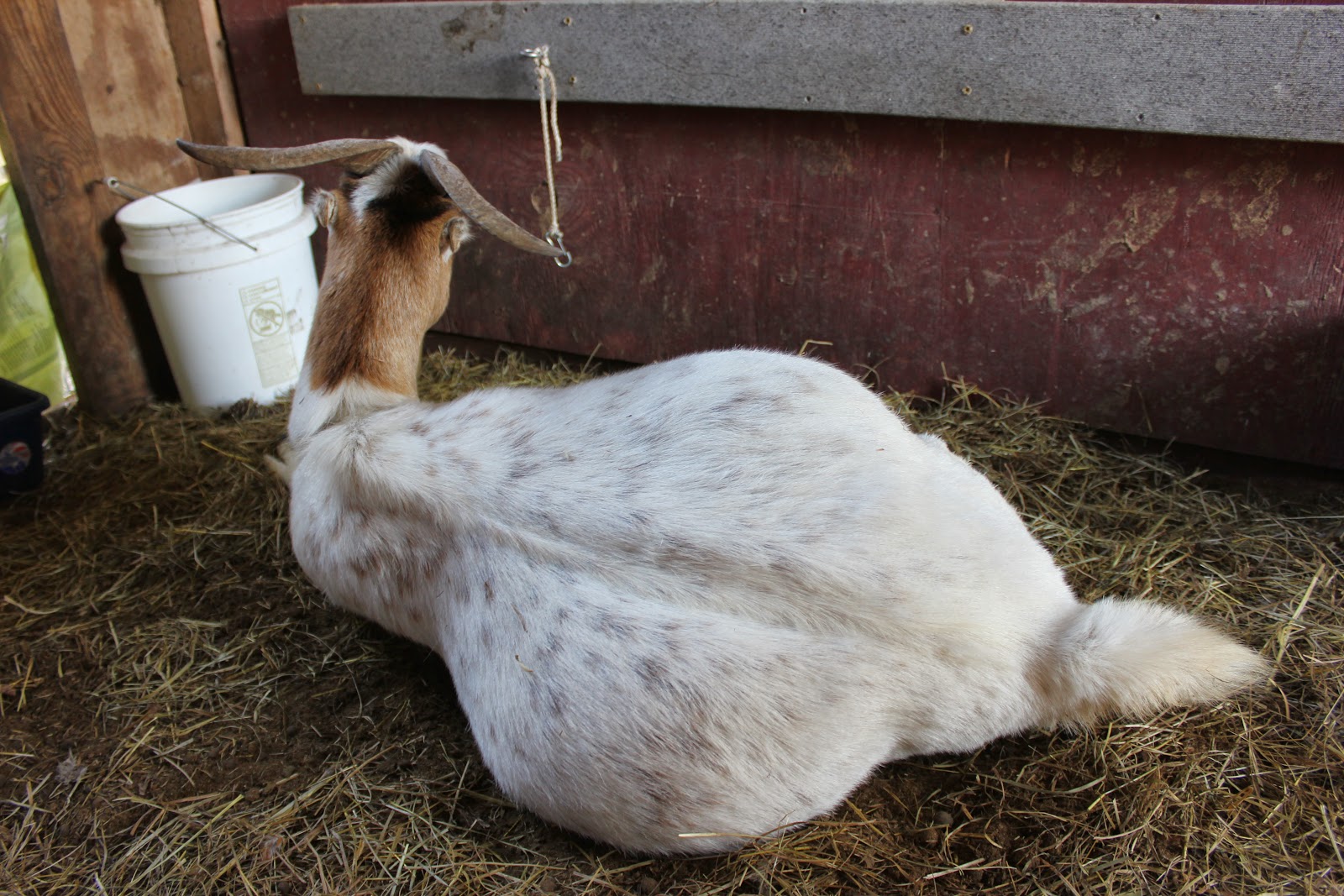 After morning chores, I got Josie all set up in the goat room and gathered the towels, feed sacks, my camera, and all the other random things I might need in preparation for the big event. I gave my friend a call and said that if she wanted to witness the miracle of life she should come out soon. Well, Josie surprised us because by the time K got out there I had just finished clearing the airway on a tiny brown doeling with blue eyes and LaMancha ears. I plopped the wet and slimy little thing into K's arm with instruction to bring her up to the house and take Rialey to help with cleanup. 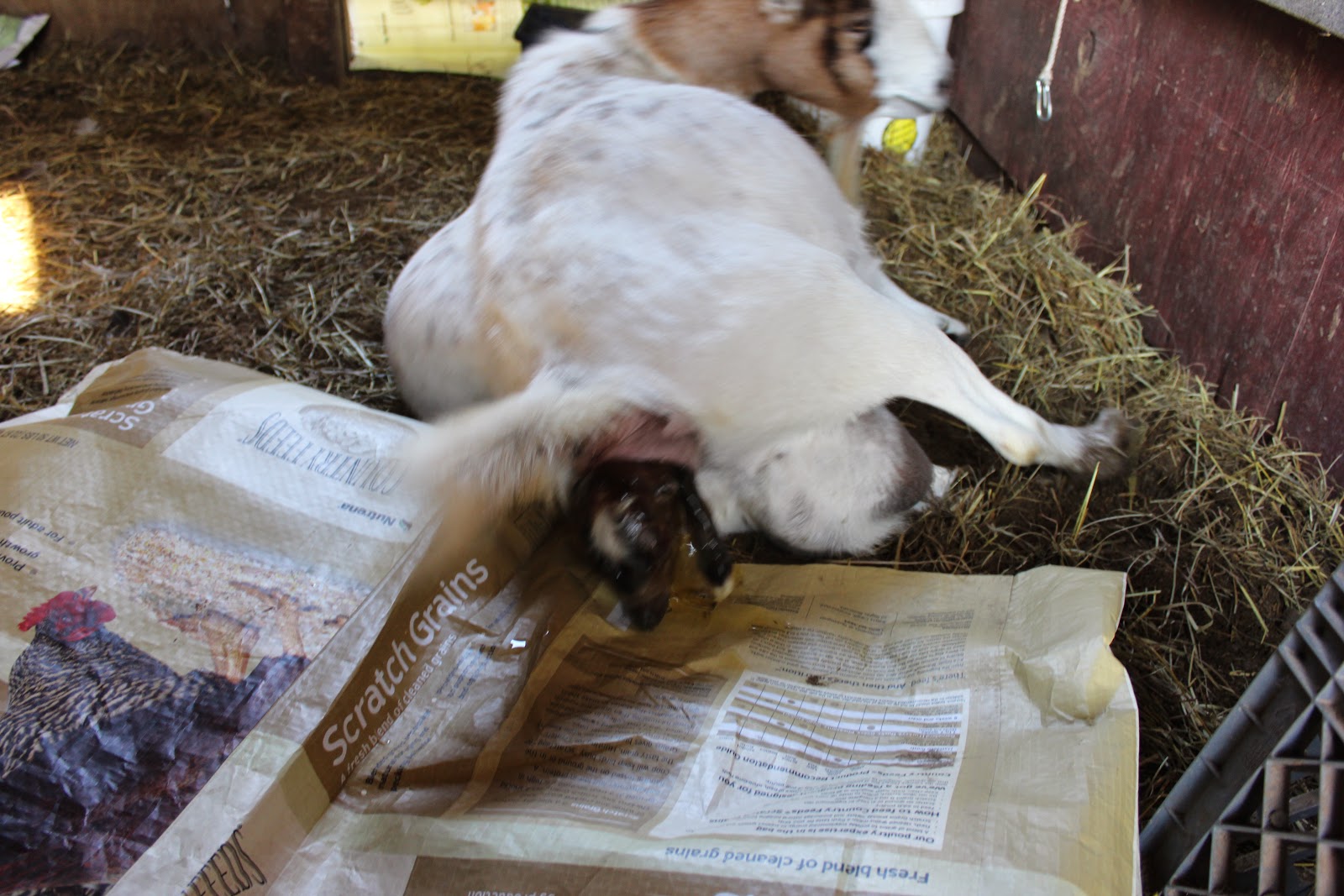 No sooner had I sent her off when Josie was down and pushing again. A few good pushes and out came another little girl! This one was bigger than the first, and she was marked just like her mother! This is the second time that Josie has reproduced herself in an offspring. This latest doeling was the spitting image of Josie and her daughter, Francesca!

I bundled this little girl up and ran her up to the house where the first baby was already getting dry and starting to get up on her feet. I handed off baby number two then headed back out to check on momma. 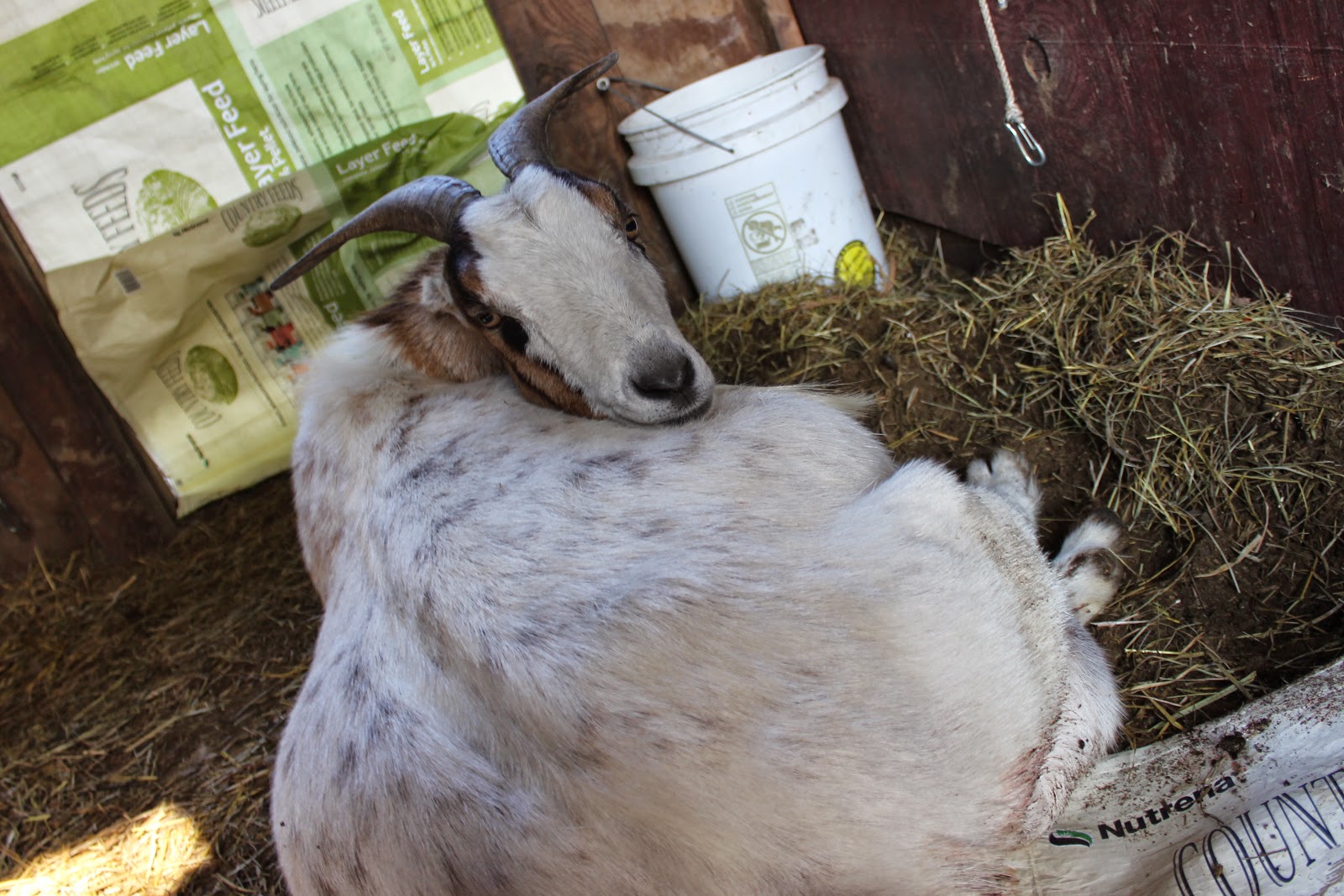 It took a long time and Josie was up and down a lot. Obviously, she wasn't quite done kidding. She pushed and pushed and finally something started to emerge. One look at this baby before she was even totally born and I knew something wasn't right. The head was misshapen somehow, but it wasn't until Josie gave a couple more good pushes and the little thing came into the world that I got a good look. 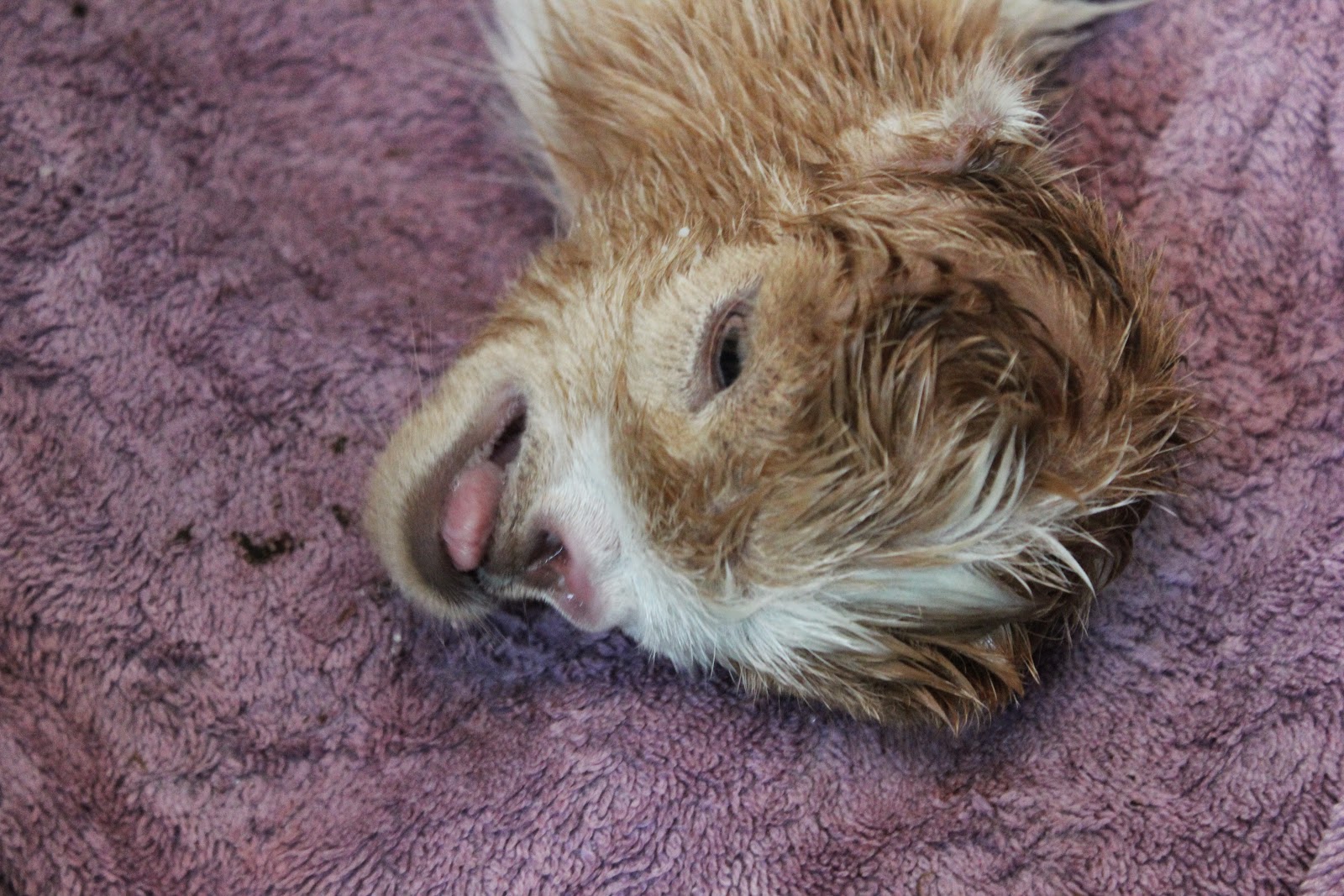 It was a little doeling with a light brown head and all white body. My first step when receiving a kid is to clear the nose and mouth. This baby had no nose. It was just...missing. I did my best to clear her airway and to my surprise she gave a pretty strong cry. I bundled her up and headed back to the house. By the time I got inside Big Onion had arrived home, and I had already started spewing a stream of expletives to make a sailor blush. 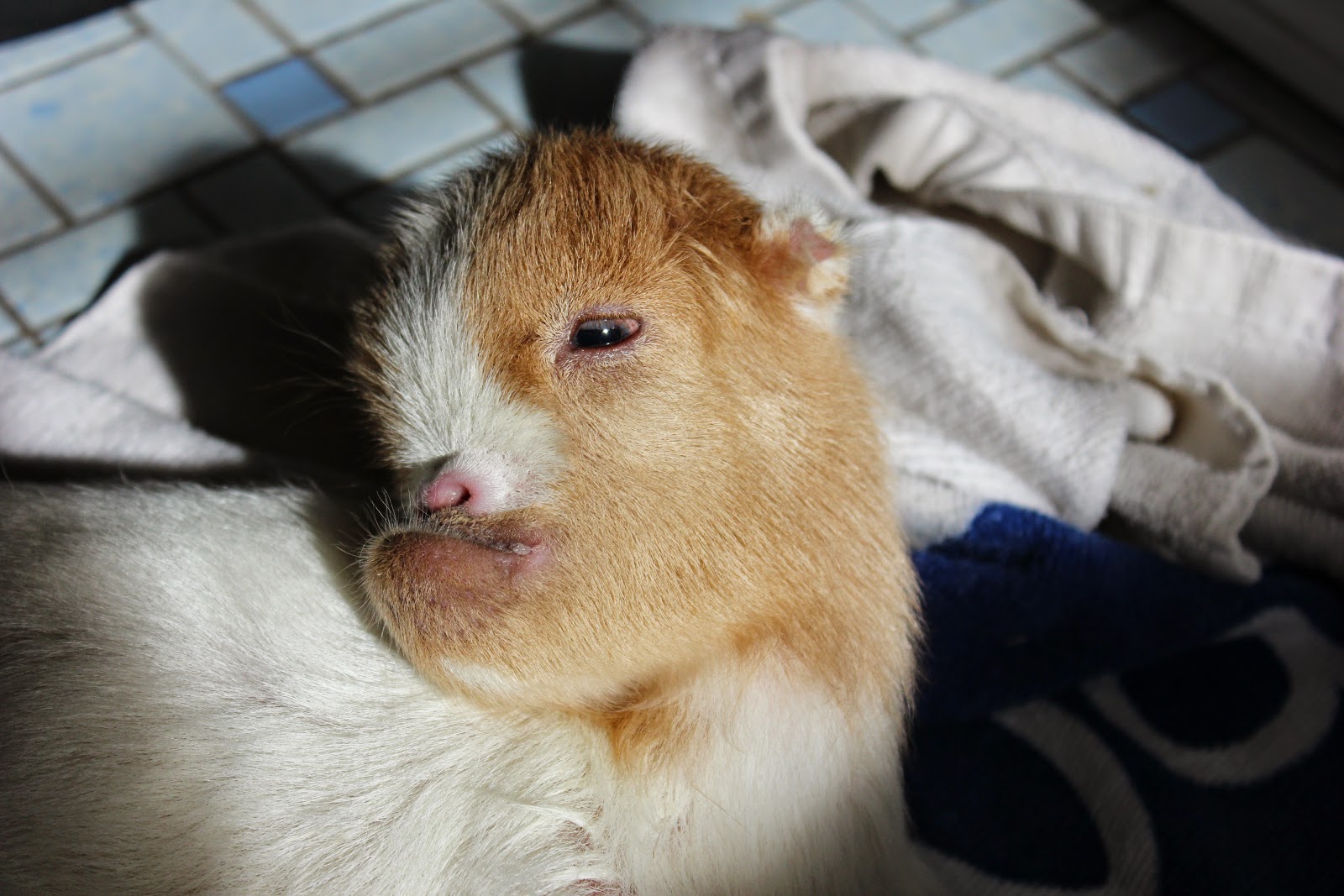 K and Big Onion and I all gathered round to look at the newest kid. It became evident very quickly that her misshapen face wasn't the only thing wrong with this little girl. She could not seem to hold her head up properly and never really made an attempt to get on her feet. Despite being dried off, snuggled between her two sisters, and laying near a space heater, she felt cold. 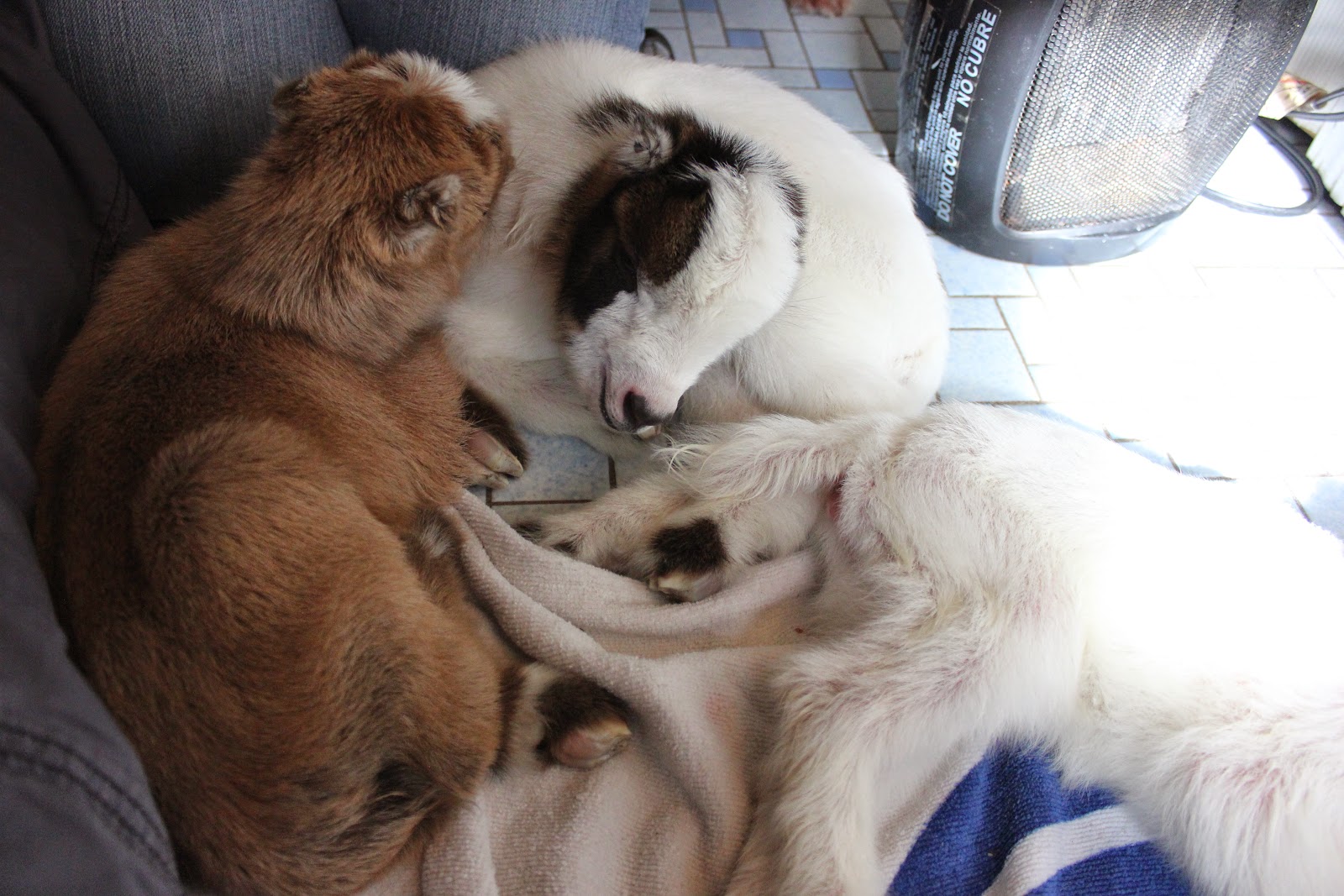 We decided that the little one probably was not long for this world and with her deformities and obvious mental disabilities we made the hard decision that it was probably best not to intervene. We kept her warm and comfortable, but did not try to feed her. We decided to call the little one Martha because even though she wasn't going to be with us long, she still deserved a name in this world. 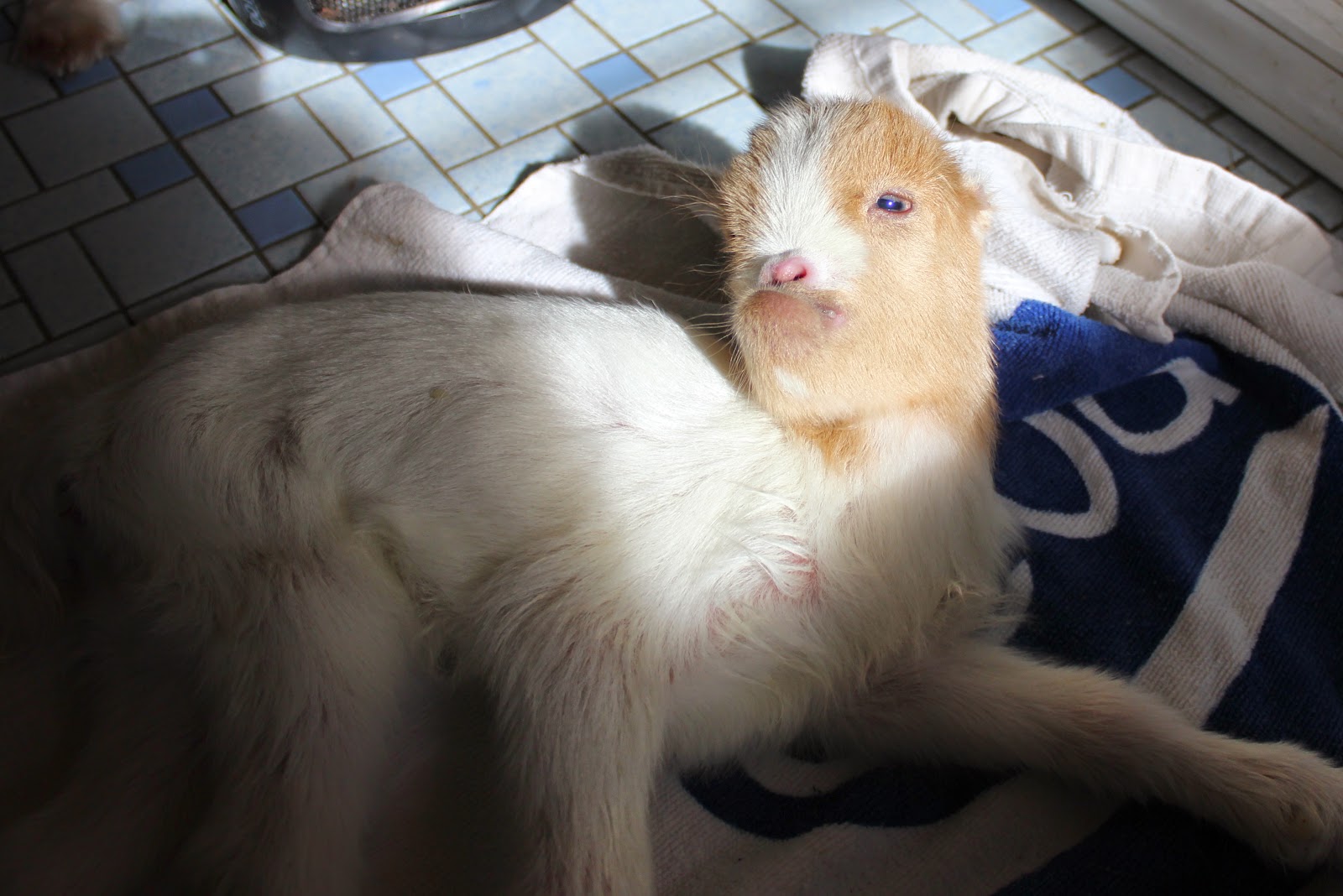 While her sisters got up and learned to walk and then hop, to take a bottle and even to try to headbutt the older kids, little Martha just laid there. Within a couple hours of her birth she was gone. It was peaceful but very sad. It seemed crazy to me that she would make it though 5 months of gestation, through labor and birth, only to die a few hours later. 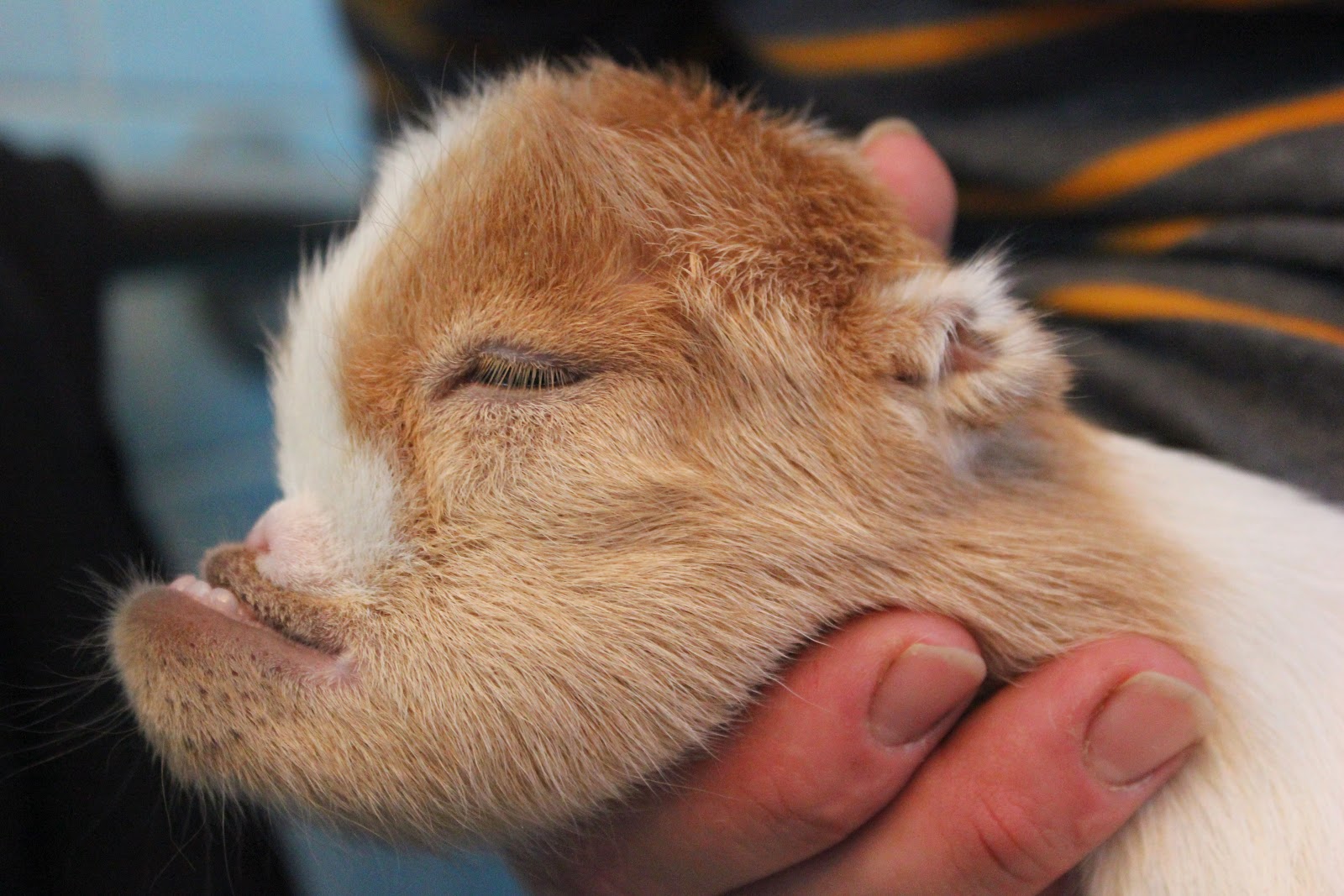 Once she was gone, we got a closer look at her head and realized that she had a clefted palate that connected up with her sinuses. If we had even tried to feed her she would most likely have aspirated and died gasping for air. In retrospect, our decision not to intervene had been the right one.

In the meantime, we had two vibrant, healthy, active doelings to contend with. I gave my friend, who had spend the last few years living and working in Qatar, the honor of naming the two girls. She decided the first girl should be called Dara, Arabic for the orange of the sun at sunset. The second girl, who was colored like Josie, had a sweet little heart shaped spot on her back. Her name became Galbi, Arabic for heart. 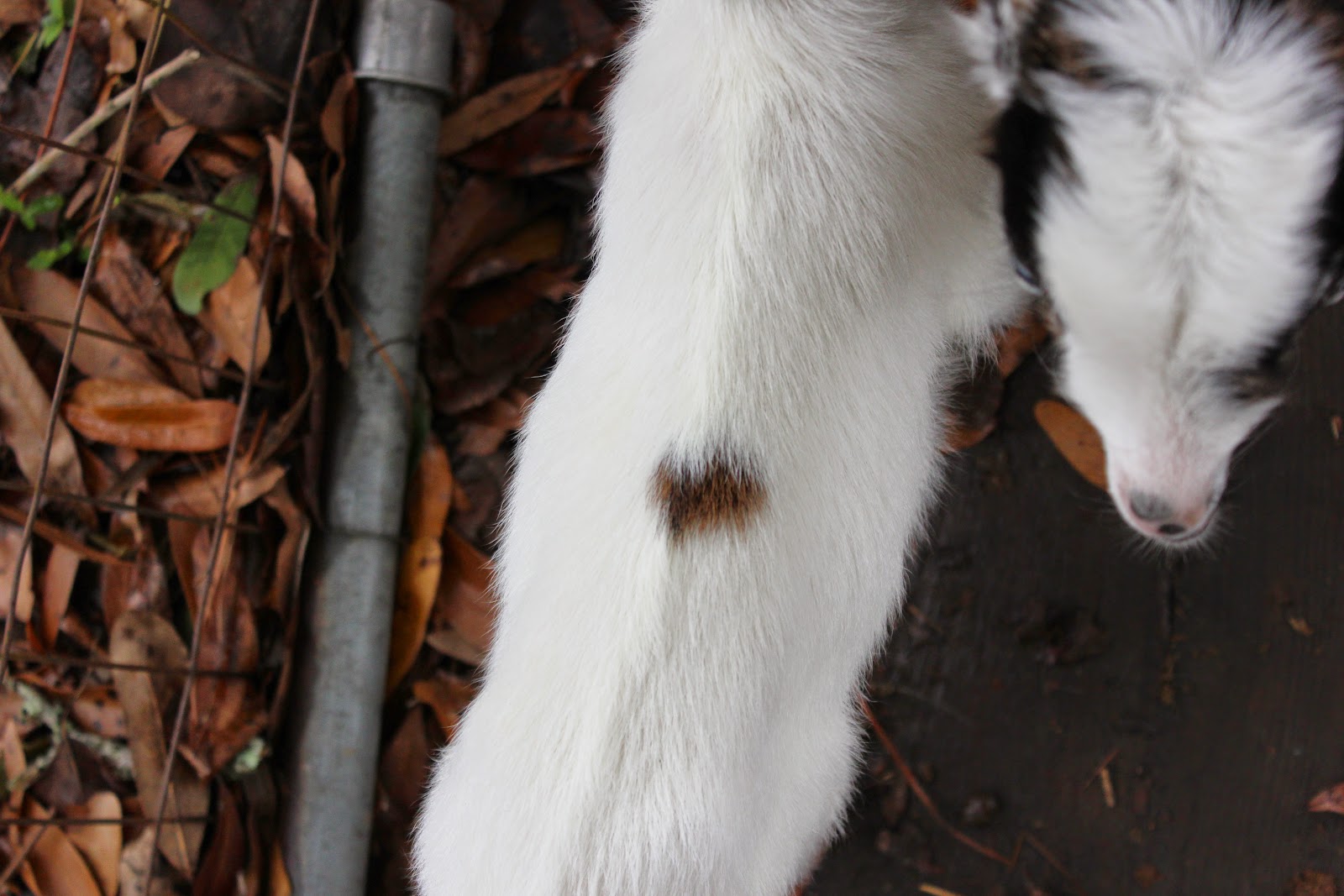 The jar of colostrum that I had so carefully collected then froze from the CAE negative girls broke while we were trying to thaw and reheat it, inspiring a whole new spate of colorful language from me. Little Dara then refused to nurse from the bottle just like Georgie before her. We ended up tube feeding her for just a day before she figured out that suckling was way nicer that having a tube shoved down your throat several times a day. 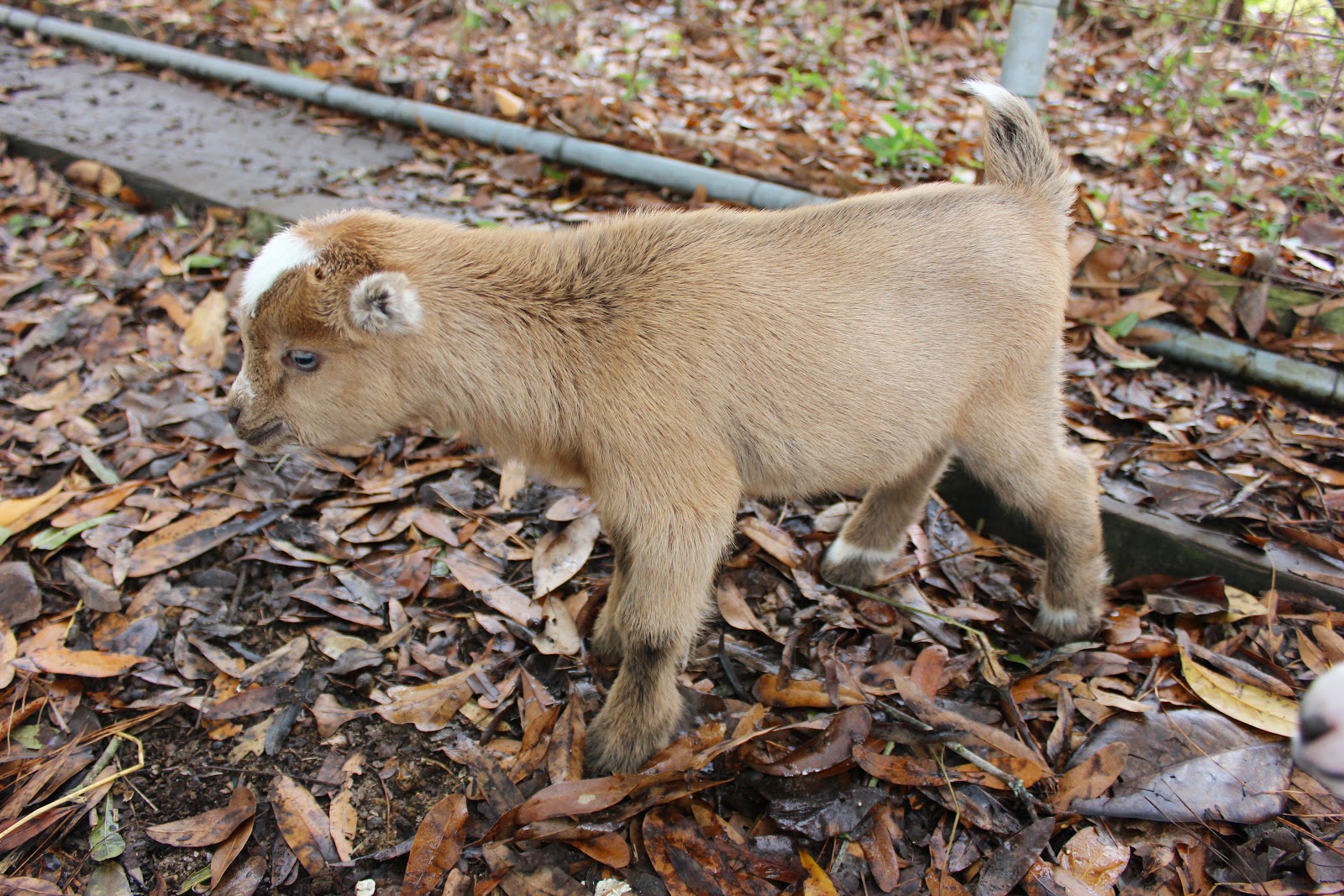 Dara turned out to be very sweet. She was the smallest of the bottle kids we raised, but made up for it by consuming large quantities of milk and making the cutest little angry baby noises when the bottle wasn't flowing fast enough.

Galbi is a total spirtfire just like her momma. She amazed us by trying to push around Frankie and Georgie within a few hours of being born! She kept trying to get up on a small box we'd placed in with the babies to play on, banging her head into anyone who tried to joint her, then falling over when her still wobbly baby legs would give out under her!

That just left Thea, our big white Saanen girl, as the last to kid.