How (not) to milk a sheep

Little Rhubard a.k.a. Ruby has been with us for about a week. It quickly became clear that this youngster was not old enough to live on grass alone as her gut became more swollen every day with undigested food and her back felt more and more bony. At first we tried powered lamb milk replacer, but she was having none of it. We do have a freezer full of goat milk, but there is such a close connection between CAE (which our girls have) and OPP, the sheep version of the virus, that we were reluctant to feed this to the girl. Everything we read assured us that pasteurizing the milk would kill the virus though, so yesterday I cooked up a batch of milk for Ms. Ruby. 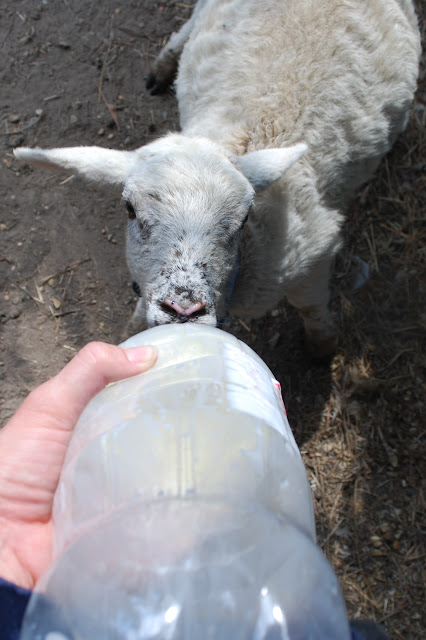 We also added a bit of olive oil to the milk just in case her swollen gut was the beginnings of bloat. 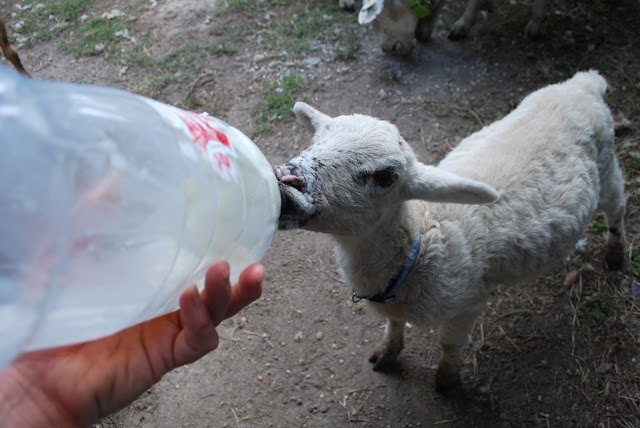 Ms. Ruby loves her goat milk, but feeding pasteurized goat milk to a baby sheep is less than ideal in my book, so today I set out to try and get some actual sheep's milk from Patch, one of our nursing mommas. 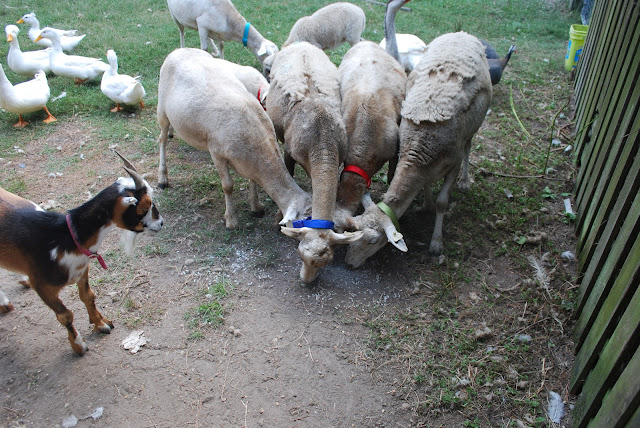 Step 1: Get the sheep into the goat pen.

I'd love to say that I called in my trusty herding dogs to move the sheep into the pen, but none of us are to that point in training (myself and the sheep included). Thank heavens those sheep will do just about anything for a mouthful of sweet feed...including following me into hostile territory. I swear Jenni in the foreground above is just itching for me to turn my back to she can give those ovine intruders a taste of her horns. 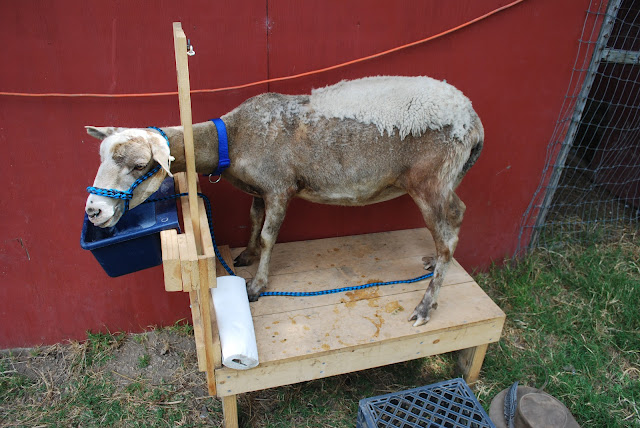 Step 2: Catch the sheep and get her into the milking stanchion.

Suffice to say this was easier said than done. At this point, the smart thing for me to do would have been to exhaust the remaining sheep, who kept trying to climb into the feed bucket on the stanchion, Ruby, who kept trying to climb into my lap and suck on my elbow, and the various ducks, geese, turkeys, and guineas who were were just generally making a nuisance of themselves. 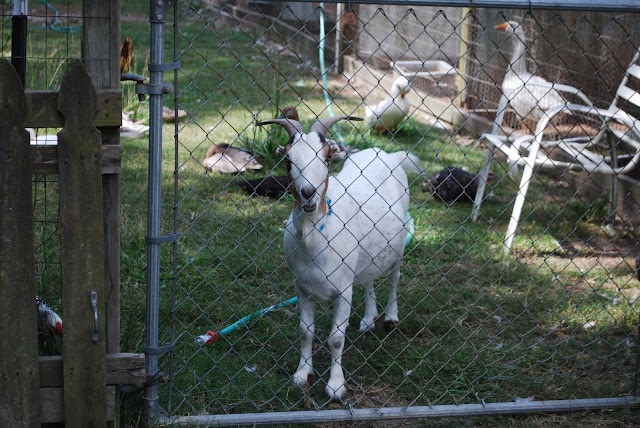 I was smart enough to exclude Josie from the party. She was less than pleased at this. Not only were the sheep in her space, but there was a sheep on HER stand, eating HER food. Completely unacceptable. After about 10 minutes of staring goat-daggers at my back, she took to banging her head against the gate then rubbing her horns back and forth on it in what I guess was supposed to be a threatening manner.

Meanwhile, I was trying my best to milk poor Patch who was being just as quiet and patient as could be amid the chaos of barnyard mayhem and my fumbling at her nether regions. After cleaning her utter of god know what she's been laying the past month (Yick!!), I did my darndest to get a grip on them tiny teats with zero success. I'm tell you, her nipples were so small, I couldn't even get two fingers around them. I even tried my homemade vacuum sealer milking contraption that works like a charm on the goats. Still no luck. Not a drop. The expression 'blood from a stone' comes to mind.

I finally went back to hand milking which was more like nipple pinching and was able to get one drop of milk at a time. I'm not kidding here. ONE DROP of milk per squeeze. At that rate, it'd take me about 3 years to get enough milk for one meal for Ruby. 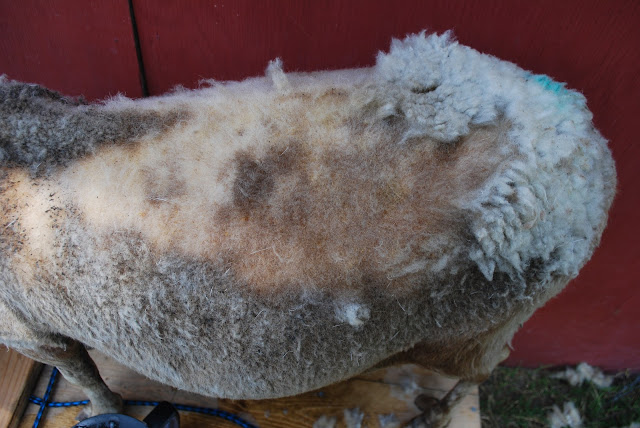 At that point, I decided to forget it and made myself feel useful by de-wooling the rest of Patch's leftover winter fuzz and giving her crusty rear a good cleaning. 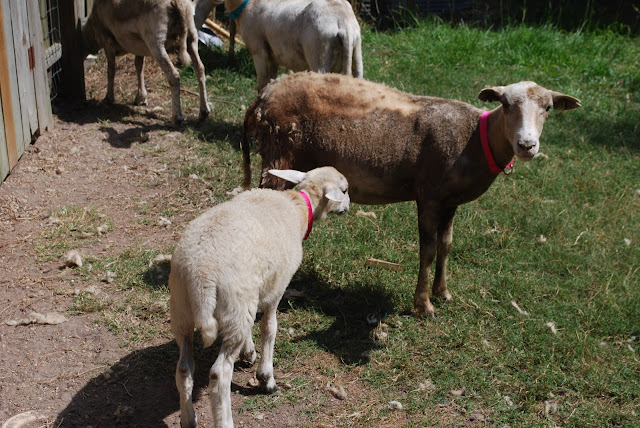 Safely back on the ground and reunited with her daughter, Miss FancyPants, none the worse for my failed efforts. I guess at this point I should give up on dreams of sheep milking and stick to the goats. The only thing I can think that might make it easier is if I pull Patch from Fancy for a day and let her build up some steam in that utter before trying again. Honestly though, I just can't see it working much better. There is just nothing to get a grip on down there. 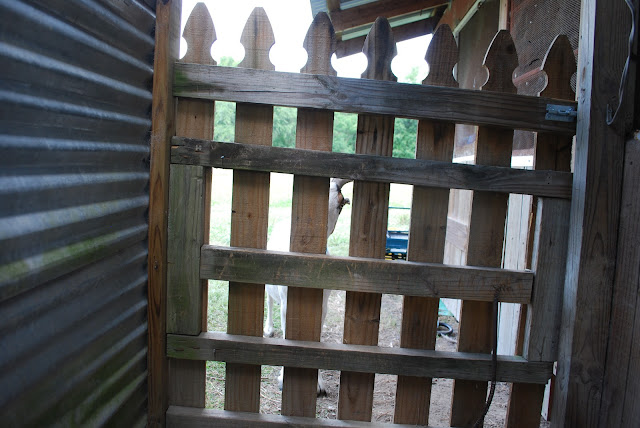 Plus, how could I possibly hope to succeed with THIS looking over my shoulder. Jeez.
Posted by Kaela at 12:02 AM