One of the hallmarks of an all around good farm dog is that they be safe with their stock. That you can trust your herding dog to be calm, watchful, and protective of her flock or herd without direct supervision, without needing to herd them all the time, and certainly without causing them harm.... 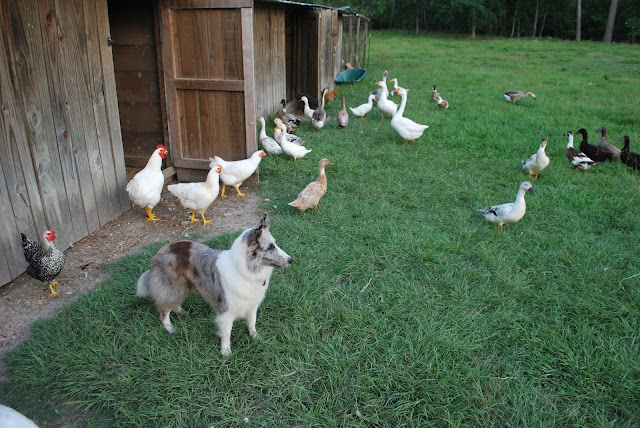 For a long time, Luna kinda completely failed at this. In fact, it wasn't more than a couple of weeks after I first got ducks (back when we were still city folk/backyard farmers) that Luna killed one. I want to make it clear that Luna is in no way vicious toward her ducks. It is never her intension to cause them actual harm, she just has....control issues.

You see, ducks don't move like sheep, they make noise and flap their winsg and move somewhat erratically, especially when stressed. All this tends to make Luna a little crazy and when the ducks don't move like she wants and expects them too, she bites. Only she doesn't give them a nice little nip. When Luna bites, she crunches. It's bad, and over the years we have lost a few ducks to her frustration. It usually happened when a duck got out or was left out of the pen for some reason, and Luna tried to get it back where it was supposed to be on her own. After these times, she always seemed surprised and extremely upset that the bird was injured. Never once has she killed then tried to make a meal of the bird.

So one of the major orders of business when we finally moved some place with space was working on getting Luna safe with the poultry. 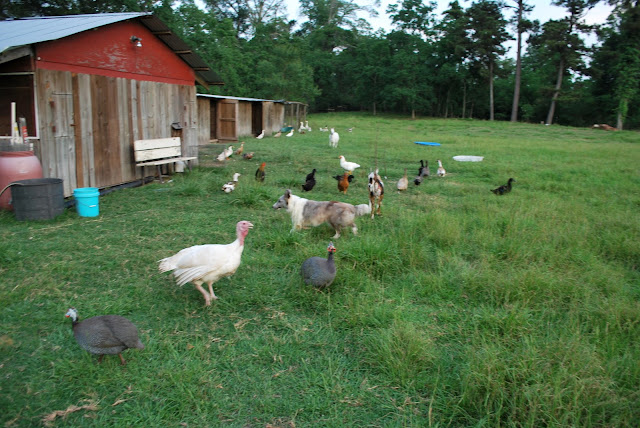 We started out by just letting her be around the poultry under close supervision, but not letting her work them at all. Teaching her that she doesn't always have to control what they are doing. At first this was very stressful for us and her. I had to remind myself to stay calm and upbeat. She got lots of praise and treats just for staying near me and leaving the birds alone. Sometimes she would fixate on a group of ducks and seem to get sucked into the need to herd them. She was always very relieved and happy in these situations when I'd call her back to me with a "Luna, that'll do!" 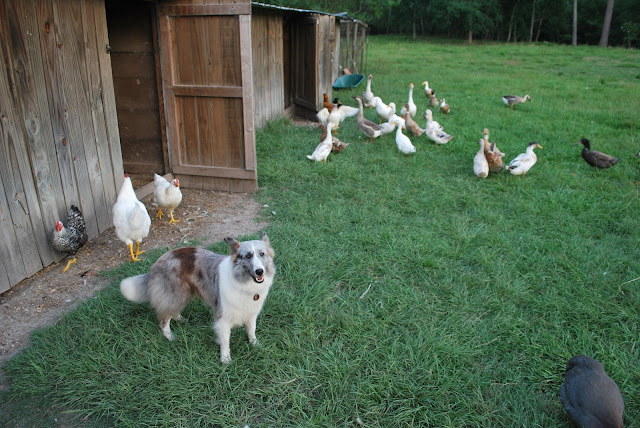 Over time, she got more and more calm with having birds all around, and we started having her help put them away at night. Most of the birds will happily put themselves away, so this was a low stress job where she could feel like she was helping without getting into any tight spots. Again, we kept it low key and gave tons of praise and treats.

Next it was time to up the ante and do some actual herding training in the largest of the poultry pens. We started on leash with our older adult ducks who are used to being herded without turning into quacking, flapping fools. This was a really hard transition for Lu. I would just have her walk behind the flock on leash, moving them slowly round and round the pen and she would try her best to cut behind me and make these crazy moaning/yipping sounds of stress and frustration. 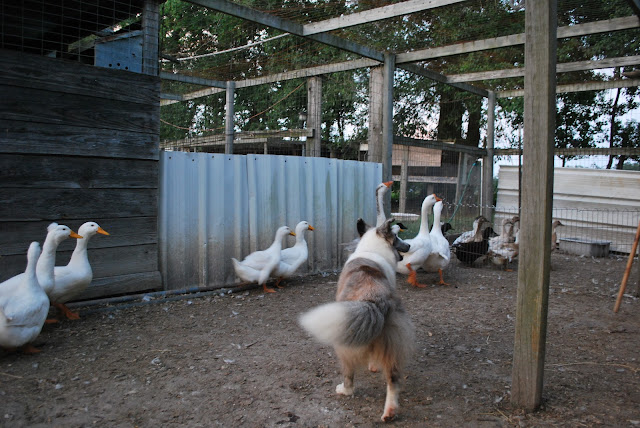 Finally last weekend, Luna graduated to working the flock off leash. I cut the pen in half with a small xpen and gave Luna the simple task of keeping the ducks on one side of the pen. 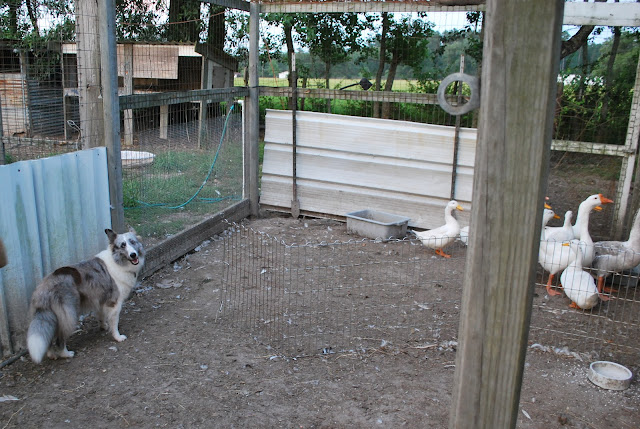 "Look ma! No feathers in my teeth!"

Luna is very good with clear cut tasks like this. She understands them and enjoys doing them. She would tuck everyone away, then we would retreat around the corner and they could come pouring out again. 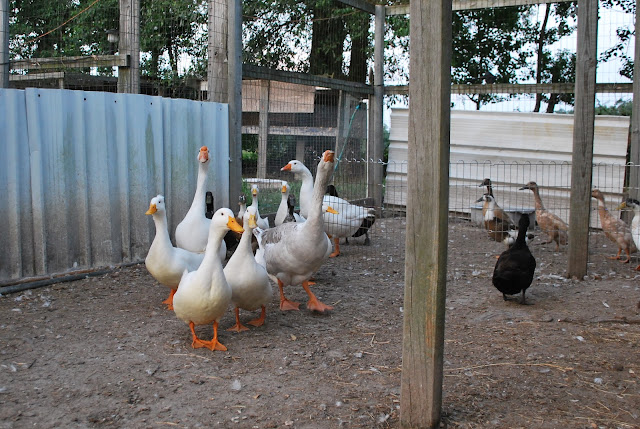 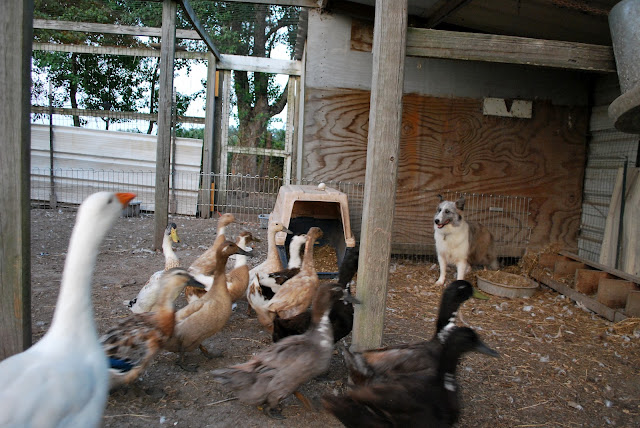 Big Onion says she looks like she is holding court here. 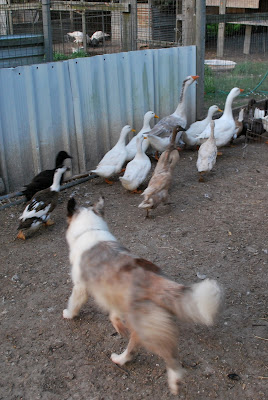 Luna did great! No near misses, no whining, no snapping. In fact, once I showed her what I wanted, I didn't have to say a word. Just point with my stock stick. 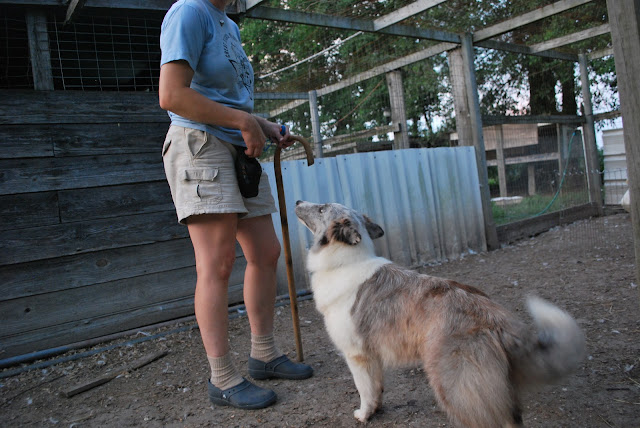 Lots of clicks and treats for my blue girl!

Now even with all this training, I don't think there will ever be a time that I would feel comfortable leaving Luna unattended with the poultry, but I think we are heading to a point where we can at least trust her not to be a danger to them.

Email ThisBlogThis!Share to TwitterShare to FacebookShare to Pinterest
Labels: luna, me, training