We made the decision early on to separate Gwen from her CAE positive mother, but since Josie had just one single kid, we started looking for a companion goat for our Gwenny soon after she was born.

We decided to find another kid around Gwen's age since a single goat is a sad goat. At first we had very little luck. Most people in our area raise Boers, which are meat goats. Since we keep our goats for milking, we really wanted to find a dairy breed. We were also constrained by cost. We just couldn't afford hundreds and hundreds of dollars on a champion bloodline show goat when all we wanted was a nice goat that we could milk and who would be Gwen's friend.

We found someone online looking to sell a young Saanen in Alabama. That goat sold before we could get her, but her owner referred us to a friend who had another Saanen for sale, an adult doe, and this one was in milk! The goat had just had her first kid and since the owner wanted to keep her buck for breeding, she decided to sell the mother when it was time to wean. She told us her name was Sugar, and she was very laid back and sweet. She sounded like she would make a great companion to our little girl. Plus, since Sugar was in milk it would mean no more pasteurizing Josie's milk to make it safe for Gwen! We hoped Sugar might even adopt Gwen and let her nurse like a normal goat. No more bottle feeding 4 times a day!
This wonderful lady was willing to drive part of the way from Alabama to meet us with the goat so we packed up my trusty Honda Element with Gwen, her crate,  an ex-pen, a tarp and lots of shavings and hay and headed east. 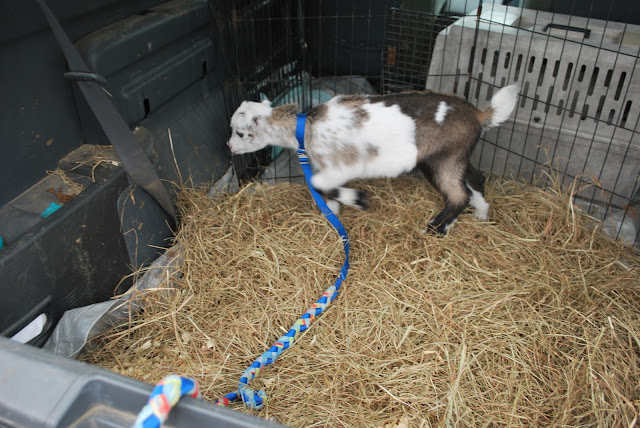 Gwenny checking out the setup. 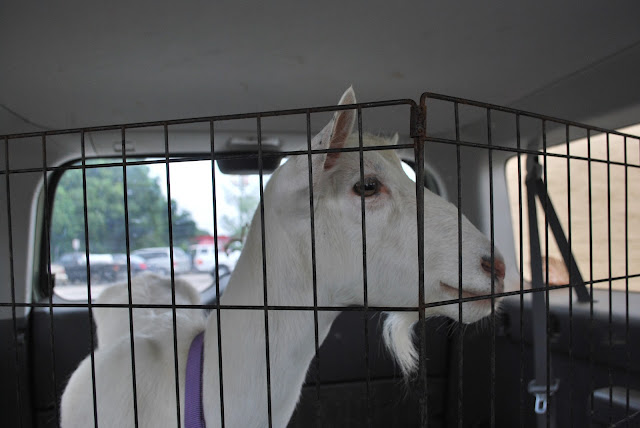 We decided to meet at a gas station just across the state border. Let me tell you, we garnered quite a few odd looks as we moved a very large white goat from the back of a minivan to the back of our small SUV. 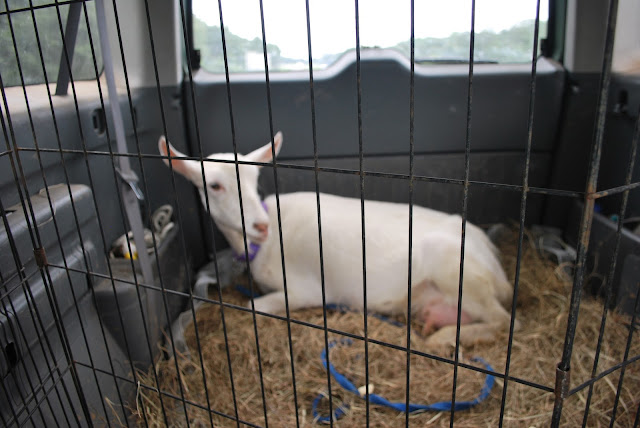 Sugar traveled like a champ even munching on hay then settling down for a rest on the way home. 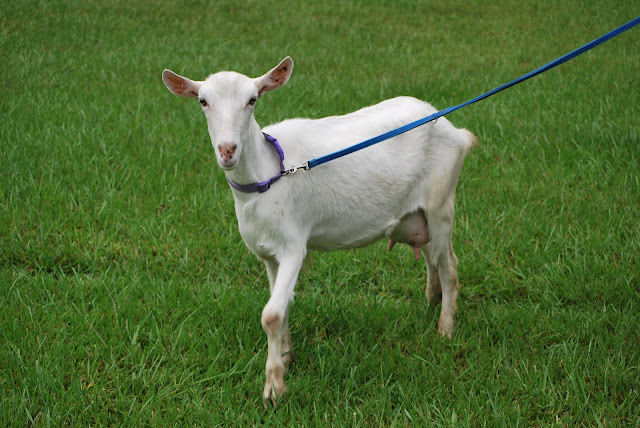 After much discussion, we decided to change Sugar's name to Amalthea after the goat who suckled the greek god Zeus (would ya look at that udder!). We call her Thea for short. She was thin as a rail so our first order of business was to fatten up the girl. The second order of business was to see if Gwen could nurse from her. The first night Gwen wanted nothing to do with the nipple, so the next morning I made sure she was good and hungry before taking Thea out to the milk stand. I cleaned her udder then squirted a little milk around the nipple and lo and behold our bottle baby started suckling like a champ!! 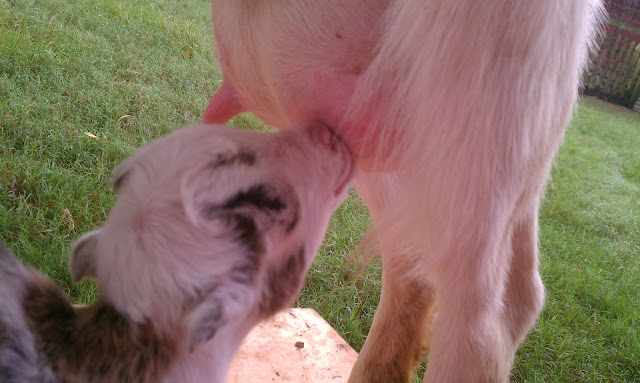 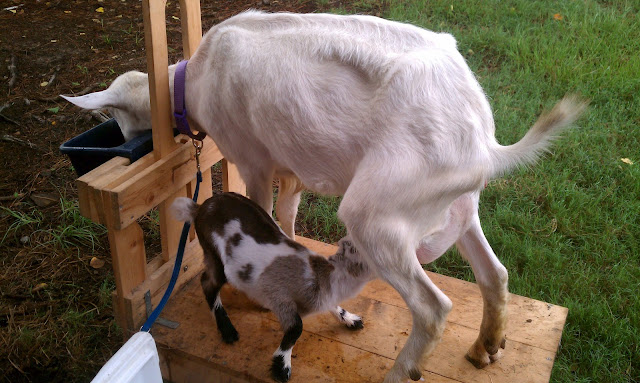 Thea for her part was just happy to have food. She was hardly concerned at all about Gwen's nursing.

Since then Thea and Gwen have become fast friends. I think I suffered more than Gwen did when we finally felt comfortable enough to let her sleep outside with Thea. Thea still won't let Gwen nurse unless she is on the milk stand or chowing down on something particularly tasty, but she is very gentle and simply walks away or gives Gwen a light head bump to move her away from the udder. I now understand why people call Saanens the marshmallow goats.

I don't this came as a surprise to anyone, but unfortunately Thea and Josie (Gwen's bio mom) do not get along. Thea is very laid back and has tried on numerous occasions to meet Josie over the fence. Josie meets her advances with hackles up and horns down. I wish we could let them work it out on their own, but since Josie has CAE, a bite from her puts Thea at serious risk of catching the virus. Keeping the goats separated is kind of a pain in the rear for us but totally worth it to keep our two newest girls safe.