We've already posted about the number of fruit bearing trees and bushes on the property, and we may have talked a bit about how we used some of that fruit. One thing I've been meaning to do with our surplus is something that man has been doing for a long, long time: make some wine.

The first time I fermented anything was right after Hurricane Katrina had hit New Orleans and I had some time on my hands waiting to return to the city. I bought a beer kit from this fantastic shop in Philadelphia, Home Sweet Homebrew, and it was the best investment I've ever made. The owners there are great, and spent a lot of time answering my questions and helping me through the process. Even after returning to New Orleans I continued to order from them since there was no local brew shop open.

Fermenting alcohol is a very simple process. You take water and sugars, expose it to yeast, and allow the yeast to convert those sugars into alcohol. You can do this with almost any sugar: malted grains, honey, molasses, and especially fruit. This happens in nature quite frequently: fallen fruits become exposed to natural yeasts (or bacteria!) and begin to ferment. Every once in awhile you may seem some birds or other animals eating these fruits and behaving ... strangely. Alcohol's effects on a body are the same be it human, bird, or rodent.

We were thrilled to see these vines growing on the property once spring came around. Muscadine! We watched them grow and waited, and waited. The only muscadine I had ever seen or tasted was a dark, dark red, so I was waiting for the color to change. On a whim I gave one of the blush colored ones a bite and, sure enough, it was sweet and ripe! What we were growing was a variety of muscadine called scuppernong.

Hurricane Isaac was approaching quickly and we knew that heavy winds would probably shake free most of the fruit. Rather than hand pick all the fruit from this somewhat wildish vine that has no real structure to it, we decided to shake them free. We took a sheet and held it up under the vines, then shook them out. The fruit tumbled down the sheet to a tarp. (Sadly, no pictures, but let's just say it was fun.)

Our final yield was 18 lbs. of ripe scuppernong grapes. I followed a recipe on Jack Keller's winemaking site which called for 6 lbs. of grapes per gallon of wine. Three gallons is a fine amount of wine in my book!
The only yeast I had on hand was a champagne yeast, but I was glad that I did. I thought it would be important to use this kind of yeast because it's extremely aggressive (converts a lot of sugar very fast) and, in my unfounded theory, would work fast enough to prevent any bacteria from forming. Bacteria can ruin a wine quickly and turn it into vinegar (not a bad thing, but not the desired result). We probably weren't as "sterile" as you really should be in making wine. I come from a beer brewing background so I'm used to making sure everything is clean, but since wine ages for much longer there is little room for effort. My starting specific gravity (SG, a measurement for the amount of sugars/solids in the wine) was 1.100. That's pretty high! 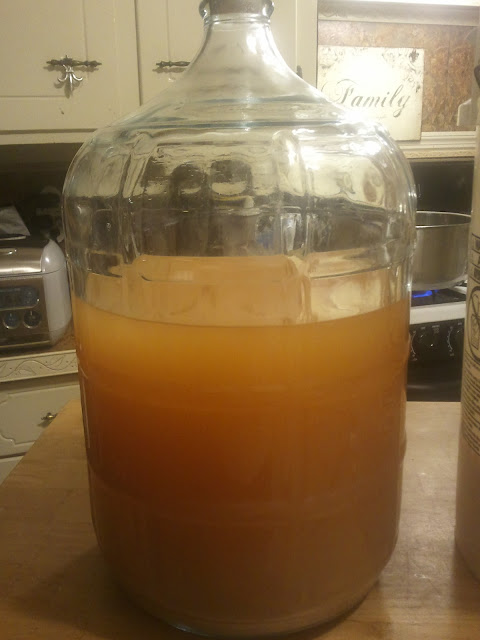 After awhile I let it ferment down. I checked the SG again: 0.995. This calculates out to almost 14% ABV (alcohol by volume) -- even for a wine this is pretty high! It also means this will be a pretty dry wine, which was what I was hoping for in the end result. I racked it off of the lees (the grape skins, etc) and into a glass fermenter (referred to as a "secondary"). This will sit for another week or so for the sediment to clear before I transfer to another fermenter. I'm considering topping up with water to 4 or 5 gallons (which would dilute it down to around 9% ABV), but I'll wait and taste it then. More updates will certainly follow in the coming months!

As fall is in full swing, we harvested our pears and are looking forward to later in the year enjoying the fruits of the citrus trees in the yard. While I doubt we would make some citrus wine, we do love making limoncello (or orangecello, or grapefruitcello, or limecello!) since it allows a little bit of fruit to go a long way. Plus we can save the juice so that we always have citrus juice or homemade sour mix on hand!

The pears have been ripening in the fridge. Let's see what we can do with those next!