Currently, we're only making use of about half of our property. In the "back pasture," as we call it, we have another 5-6 acres and a couple of small ponds. However it's all partially fenced, so we're hesitant to put any stock out there.

The north side of the pasture is creek; the west side is half fenced, with posts already up along the rest of it; the south side was fenced by the state; the east side was completely lacking fencing.

I had been pricing fencing for awhile, but we had a lot of other more immediate concerns on the half of the farm that we were using. I suspected in a few months we'd be able to afford what we needed and would eventually get some time to get everything up.

Lo and behold, a friend of ours told us of his grandfather's old dairy farm. Apparently he had recently passed away and our friend found a shed on the property absolutely full of rolls of fencing, posts, and barbed wire. He said we were welcome to whatever we needed.

It took us awhile to get it out of the shed and loaded up on the trailer. Many thanks to our friend and his father who helped us with this rather daunting task! We sadly didn't get any photos while we were there, but you can definitely take a look at how loaded up the trailer was. And, of course, it had to rain cats and dogs on our drive home. I won't bore you with too many details on how fencing is put up, mostly because I can in no way claim to be an expert. There's a variety of sources out there to learn how to install field fencing. We're big fans of Google when it comes to research, and if you're a new farmer you might want to do the same.  Properly installed fence should require little maintenance for some years, so I'd rather do it right from the start.

First off, our neighbor was kind enough to bush hog our field for nothing. I offered him a turkey and he refused. He did it just to be nice! How awesome is that? It's good to make friends with your neighbors. I hope we can return the favor one day soon. Clearing that whole field saved us from a whole lot of extra work!

Now came the fun part of actually putting up the fence. We decided to make use of t-posts. While we have an excess of 4x4s from the southern property line we had no auger and not enough manpower or time to dig those holes by hand. The t-posts had already been purchased months ago in preparation for fencing, so it was just a matter of hammering them in ... which sounds easier than it looks.

We decided to space them fifteen feet apart, and to leave a twelve-foot opening where we'd like to add a gate. While we want it closed off, we do want to make sure we have access from either side, especially since we're not sure if the small bridge that crosses a drainage ditch would actually hold the weight of a car, truck, or tractor.

For the H-braces we used Wedge Loc, a system that lets you build the whole fence with t-posts, as normally you'd need wood for the braces. This way we didn't need to dig any holes and save us some time. Wedge Loc doesn't seem to have a huge reputation (I'm surprised I even found it) but we'll see how they hold up. In theory it should work well, but only time will tell.

Since the fencing we got from our friend was only about four-feet high, we'll be stringing a strand of barbed wire across the top. Sheep don't typically climb things, but this will help more with keeping the goats in and some potential predators out. 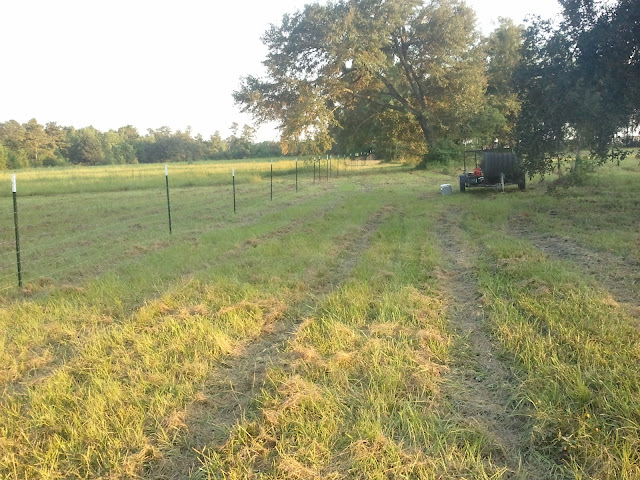 Putting up the actual fence requires anchoring one end of the roll, unrolling it, standing it up, then pulling it taut before attaching it to the posts. I fashioned a fence puller out of a 2x4 and some hooks and we used the winch on the Grizzly to do the pulling for us. It got it pretty tight, but a tractor would probably have worked better. At one point I put the Grizz in reverse to give it some extra tension and snapped the 2x4 fence puller in half. Oops.

A week ago I finished the fencing on the western side, save for the barbed wire. This past Monday was my birthday and to celebrate I took off work to try and get as much fencing done as possible (don't worry, I took plenty of time to relax as well). We brought Thea and Gwen out with us. They keep us so very productive. 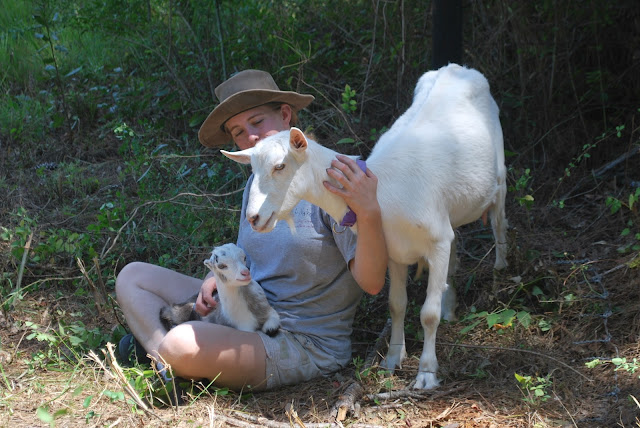 We ended up running out of t-posts and sunlight that day but we're very close to finishing. Hopefully in the next couple weeks we can get the last bit of fence, barbed wire, and gates up and put all of our land to use. We have plans on building some large, mobile chicken tractors. I'm very much looking forward to seeing the field dotted with sheep, goats, and chickens. For now, I'm certainly content just being out there and admiring the view. 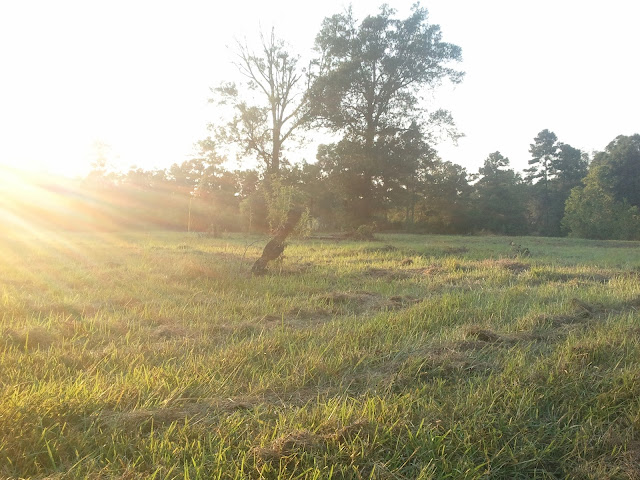