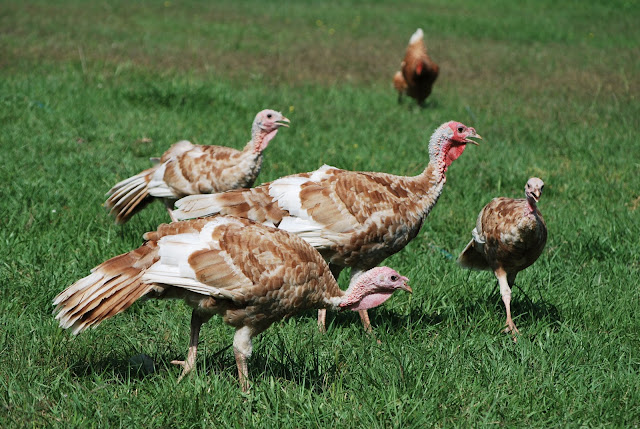 Our little Bourbon Red turkeys are not so little anymore. They are slow growing, but getting bigger every day. I love it when the turkeys are this age. They are not old enough to be aggressive, but they are big enough to run free with the rest of the flock. This is our first time raising this breed, and they have been the nicest group of birds yet. They are curious and friendly without being too pushy or obnoxious. I also think they are really pretty. 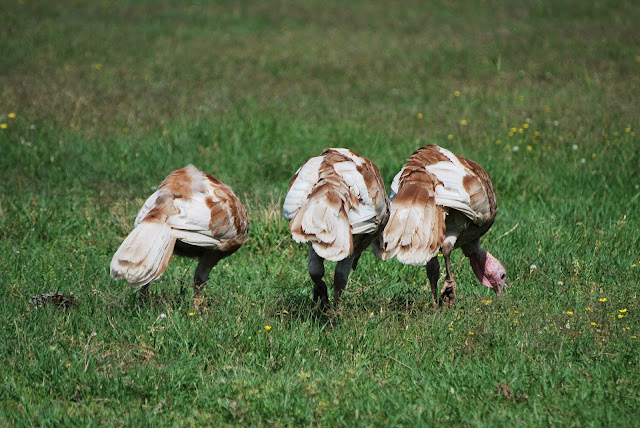 We did end up having to clip turkey wings for the first time with these guys. It seems like as soon as they got fully feathered, the birds started flying all over the place. When the two toms nearly took my head off flying up onto the roof of the shed, I knew it was time to do something about it.

This group of turkeys have been sharing quarters with a couple of guineas and a larger group of ducks that all hatched around the same time. Our eventual goal was to move the young turkeys and guineas into a pen with our remaining 3 adult guinea. The guineas seem to like to follow the turkeys, and this makes them much easier to manage and put away at night. 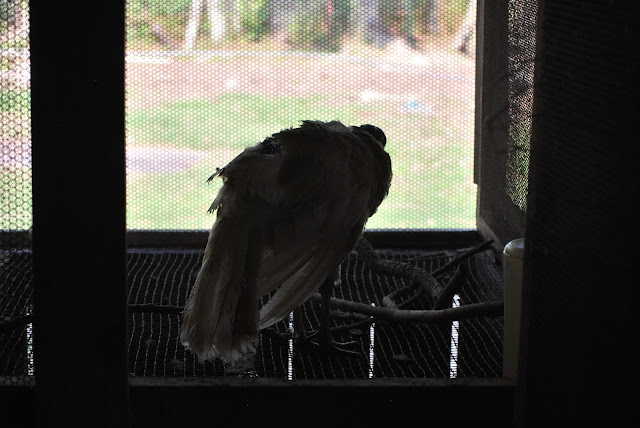 Unfortunately, I think I made the move a bit too soon. The first first night that we moved all the birds together, we woke the next morning to find that one of our little turkey hens had been attacked. She was missing the skin from the back of her head and neck all the way down to between her wings. None of the other birds were harmed, and the pen was secure that morning. We took the poor girl, who was still alive and responsive but obviously in pain and shock, treated her wounds as best we could, and put her in a cage inside the poultry house. We hoped that since all the damage seemed to be on the surface that somehow she would pull through.

That night when I put the birds away, one of the adult guineas started attacking one of the younger guinea. He was pinning her in a corner, grabbing the back of her neck and trying to climb on her back. Maybe it was extremely over zealous mating behavior, but it was obvious that this male was the one who hurt our poor turkey the night before. The rest of the young turkeys and guineas went back to their pen with the ducks. Then after a lot of chasing and cursing on my part (let me tell you, guinea wing feather to the face HURT!), I grabbed hold of that damn guinea and told Big Onion that he had to go!

Despite repeated trips out to the poultry house to syringe feed water, vitamins, and remedies to our little turkey hen, by morning she had passed away. I guess the shock of it was just too much for her or perhaps she had some internal damage that we could not see.

This leaves us with just four Bourbon Reds, two hens and two toms. One of the toms will be leaving us some time around November (if you know what I mean), so we will probably be looking to add at least a couple more hens to the flock so that next year we can breed our own birds.

We have since moved all of the turkeys and guineas back together with no problems, and needless to say, the dogs and cats enjoyed their guinea meat dinner that night.