We are having an unusually cold winter here on the farm. Of course, I should say right now that what we are experiencing is nothing compared to what folks north of us have to deal with on a regular basis, but for us, even just dropping below freezing presents a whole new set of problems that we are not used to dealing with. Seriously, I don't know how you folks up north do it! 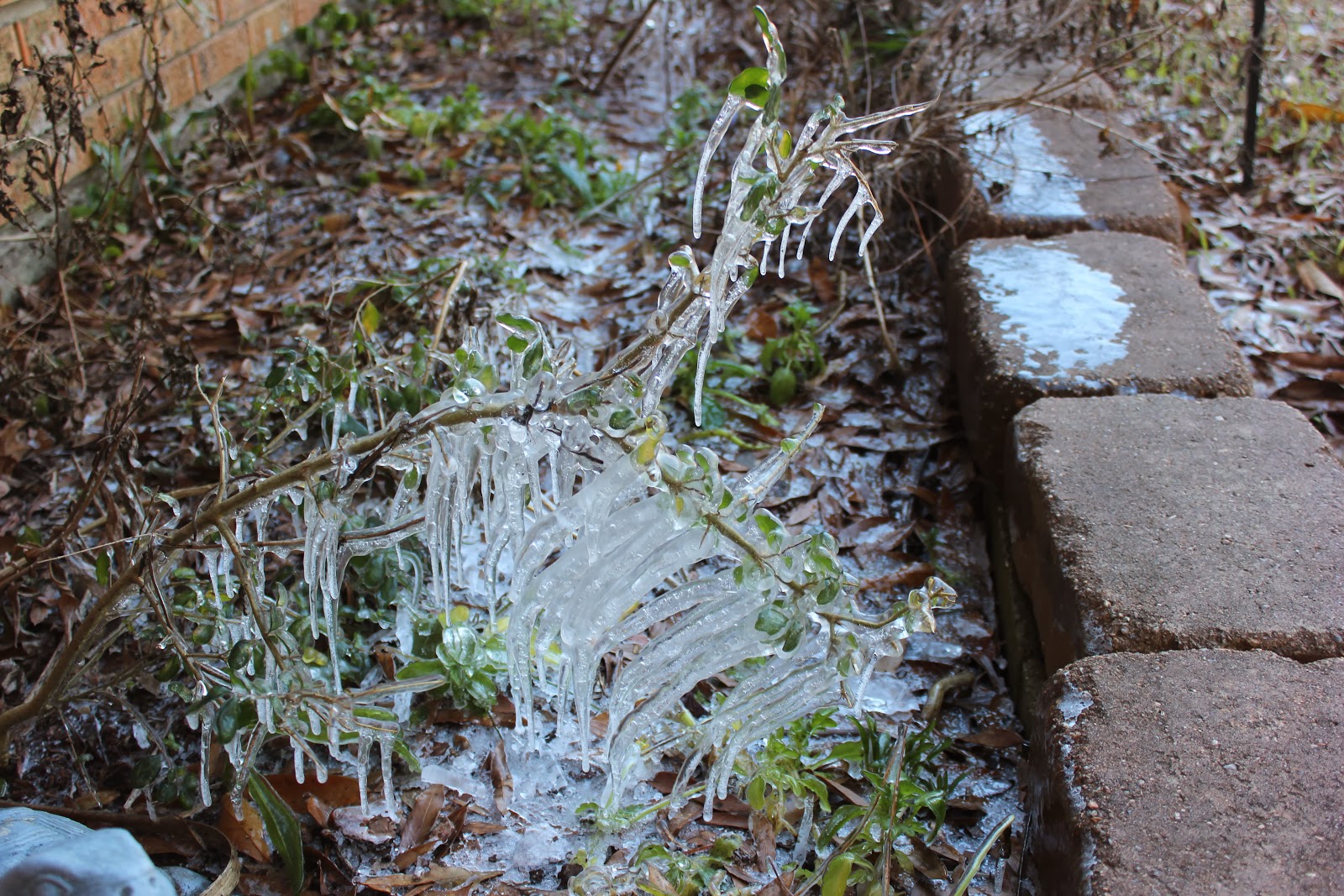 This particular cold snap closed down roads and schools and both of our day jobs, but here on the farm, it wasn't nearly as eventful as a couple weeks ago when our temperatures dipped into the teens. We had two different pipes burst, one in the processing shed and the other in the poultry house.

The spigot actually blew off the poultry house sink while we were at work that time causing water to rocket up to the ceiling of the building and cascade all over everything inside, including the closest rabbit pen with 7 baby bunnies. We were at work at the time and came home to a strange roaring sound coming from the building. We don't know how long the thing was jetting out water, but the ground all around the building was saturated and everything inide was soaked. Thank goodness none of the animals seemed worse for the wear, and nothing got wet that couldn't be dried.

Since then, we have learned how to shut off the water to those out building and to run the pressure off the lines and hoses. This time our worse pipe related casualty was an old, old hose spigot that only the neighbors use. In all cases, Big Onion stepped up to the plate and was able to use his amazing ability to fix just about anything that's broken to set things right quite quickly.

Below are some pictures from our most recent freeze... 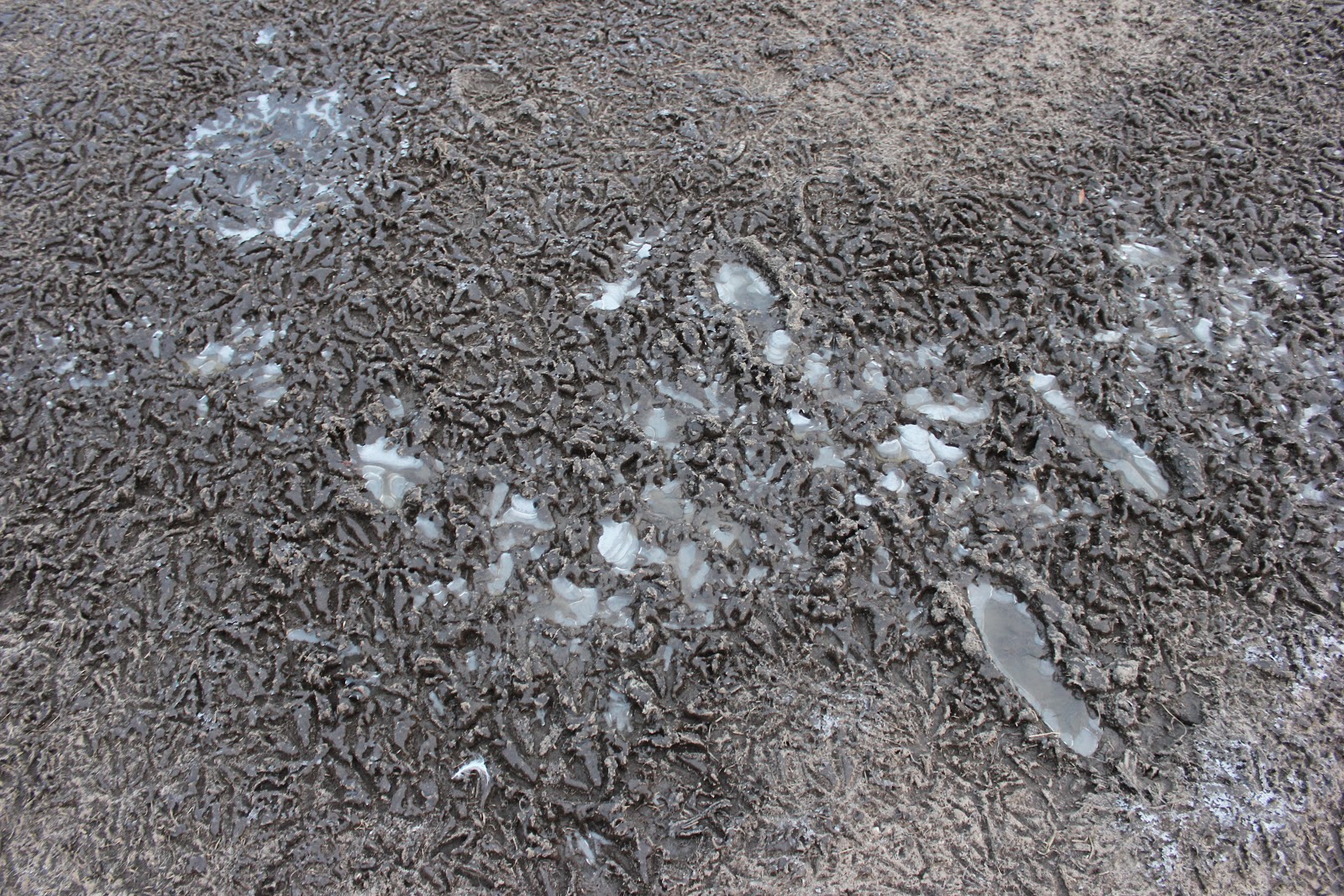 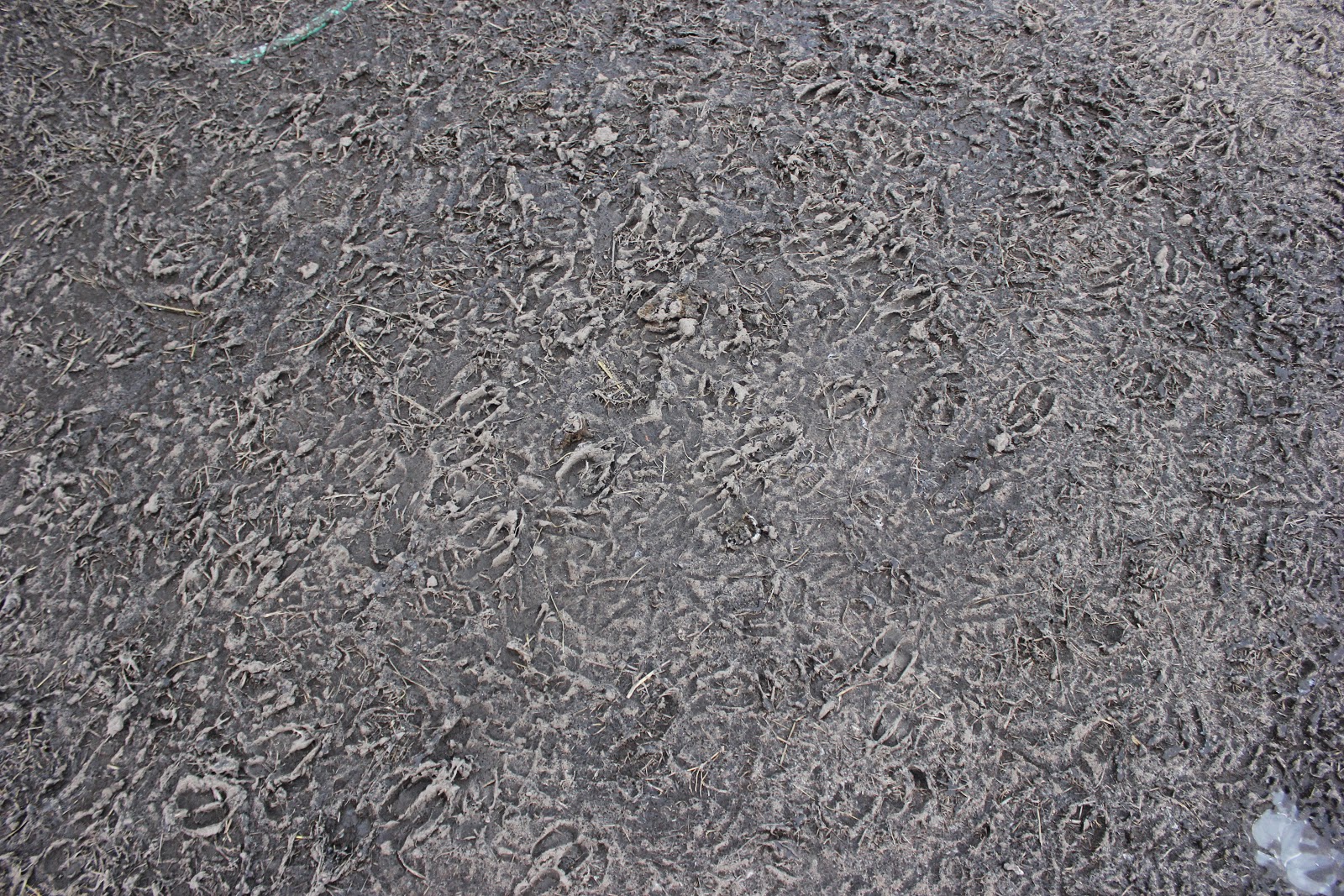 I don't know why it's so fascinating to me, but the mud froze. All that mud was hard as a rock and in some places quite slippery. 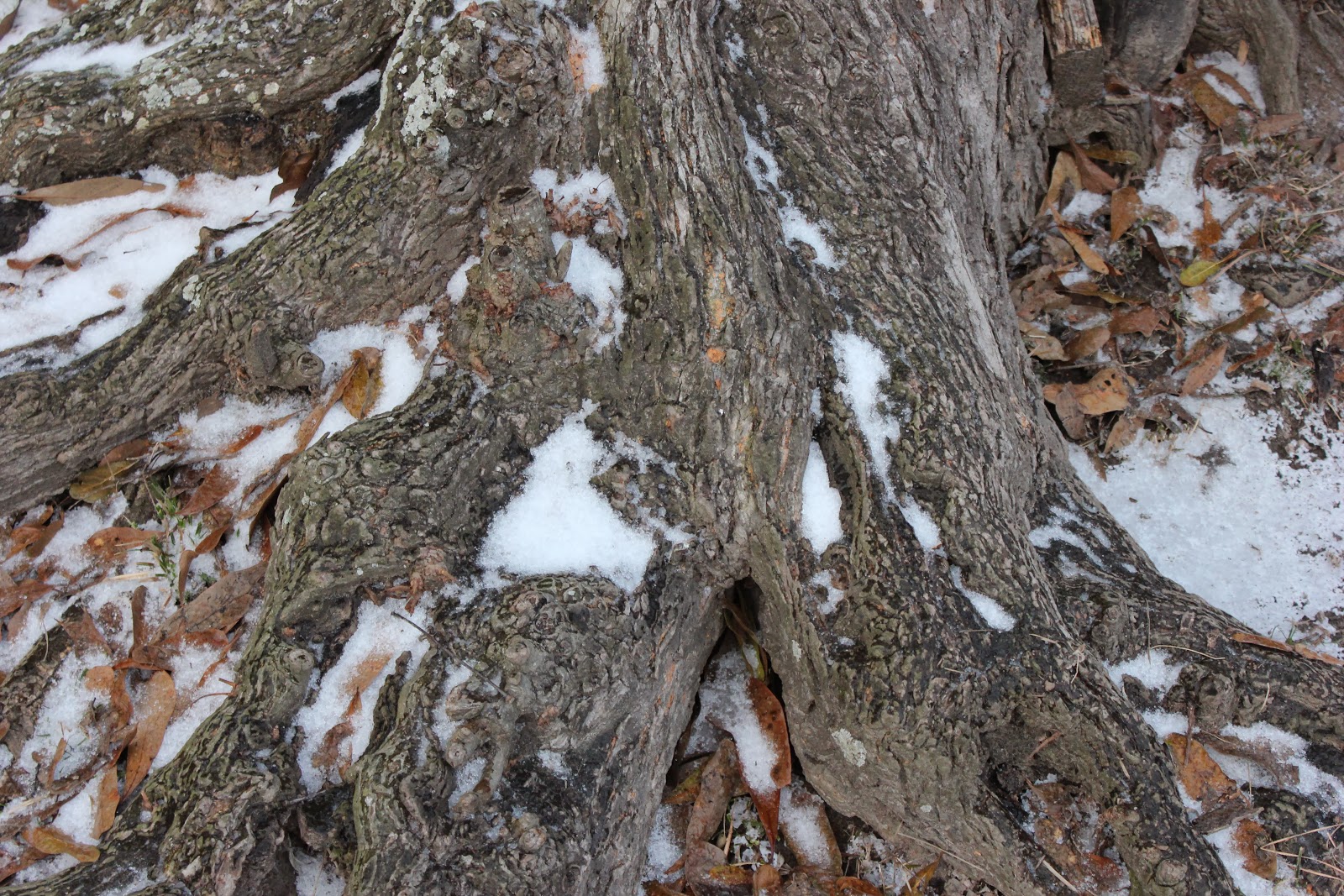 "Snow" around the base of a tree. Really I think it's just collected sleet, but it is still something we don't get to see down here too often. 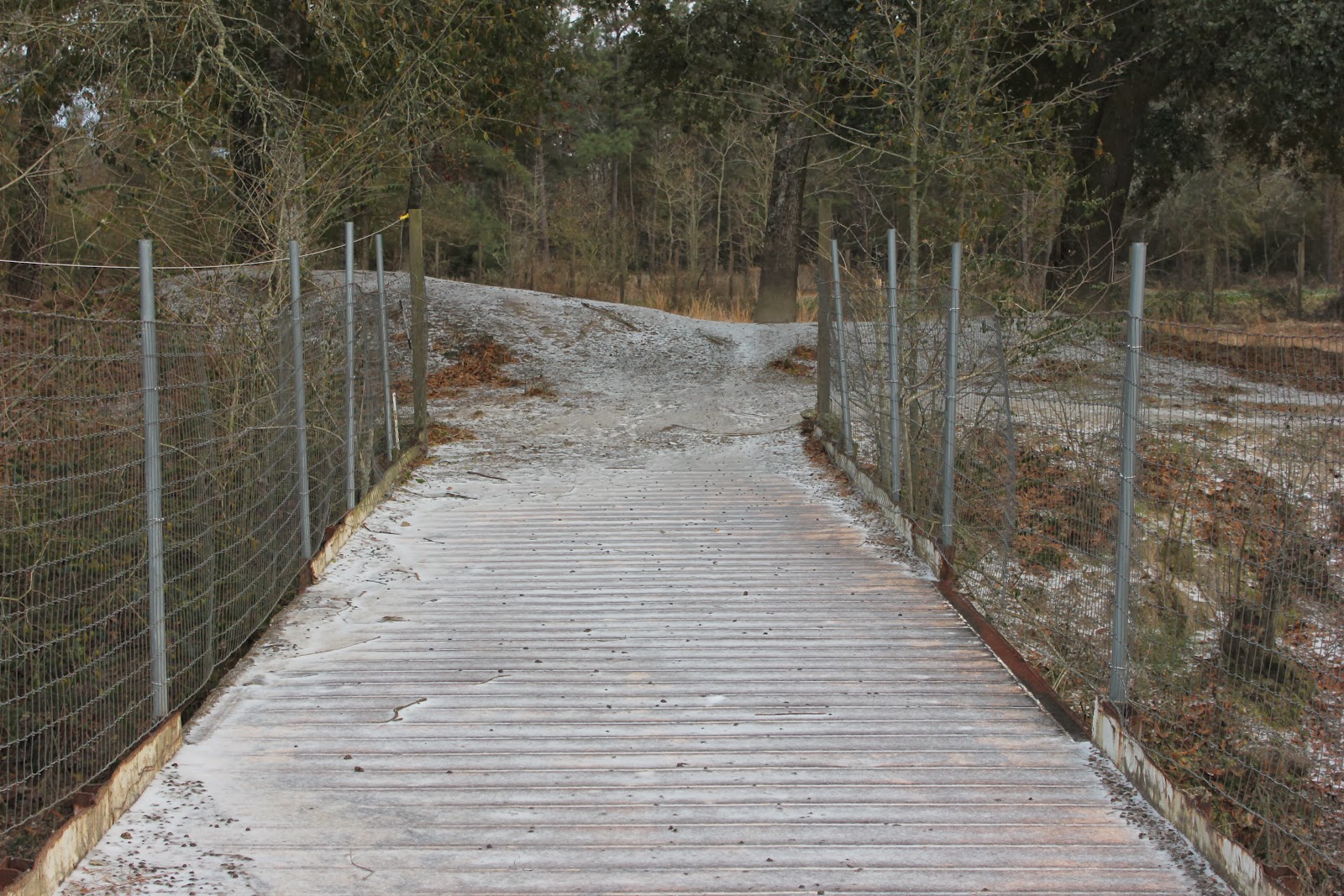 The bridge and hill beyond froze over pretty good. Poor Big Onion went work boots over keister one evening trying to get some silly ewe and her lamb back across the bridge for the evening. He was carrying the lamb at the time and hit a patch of ice, but thankfully neither were injured in the fall. 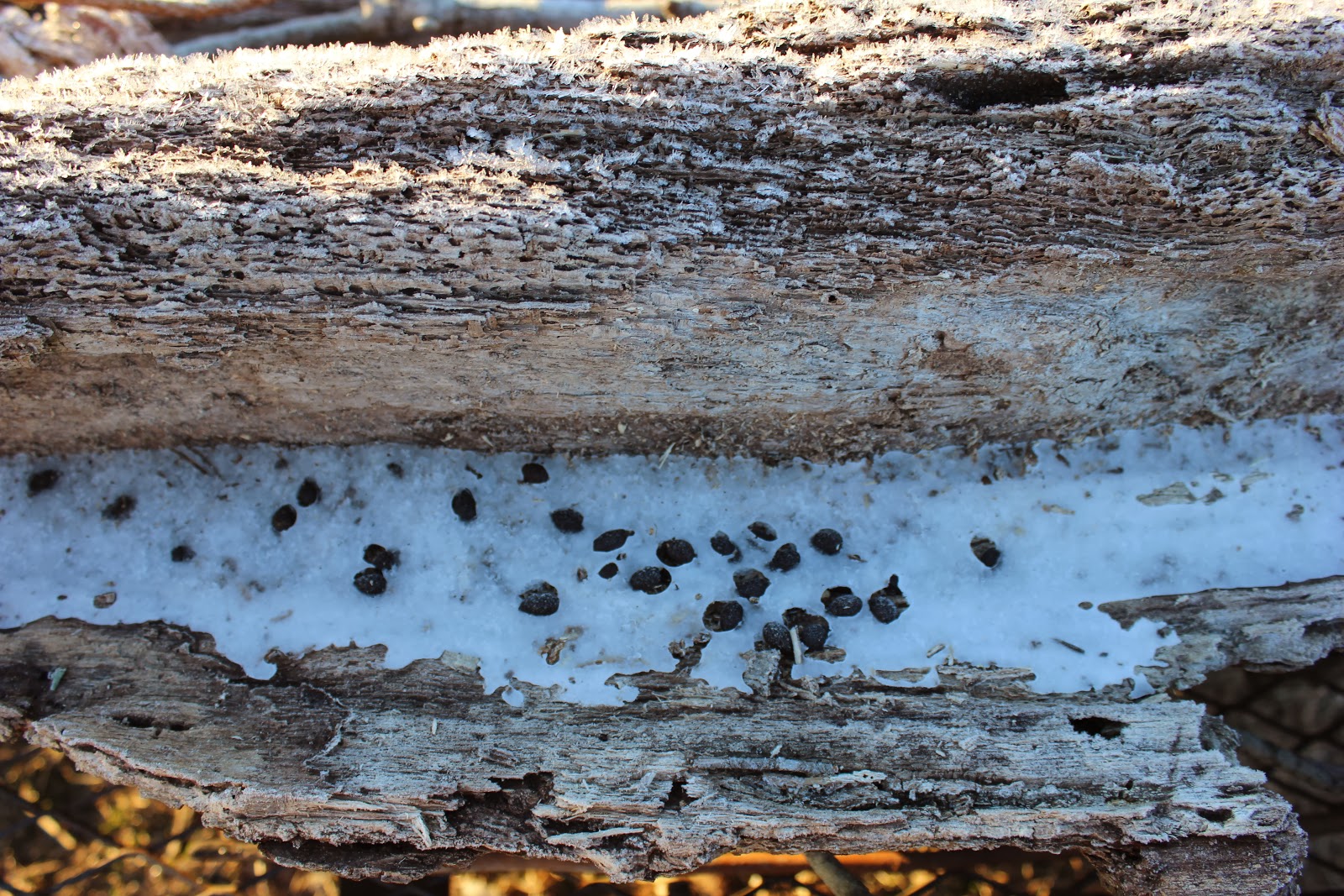 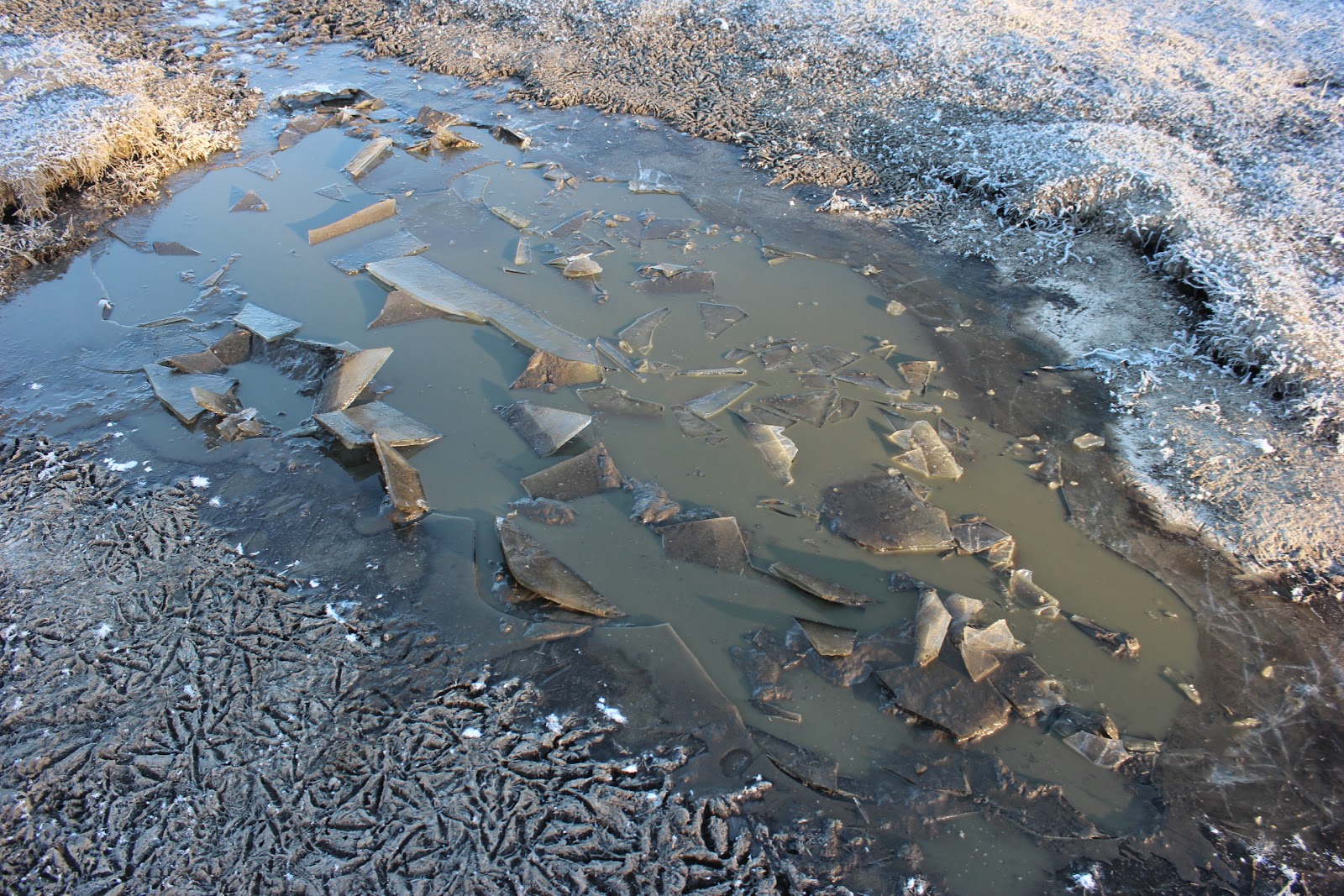 I had way too much fun stomping around my little hand dug pond and breaking up all the ice.

It was also funny to watch our rooster, Frankie, peck at then cock his head and stand on the frozen water in his pen. When I let them out of their pen, the ducks would take a couple steps then plop down to warm their feet before getting up to waddle a little further on their way to breakfast. 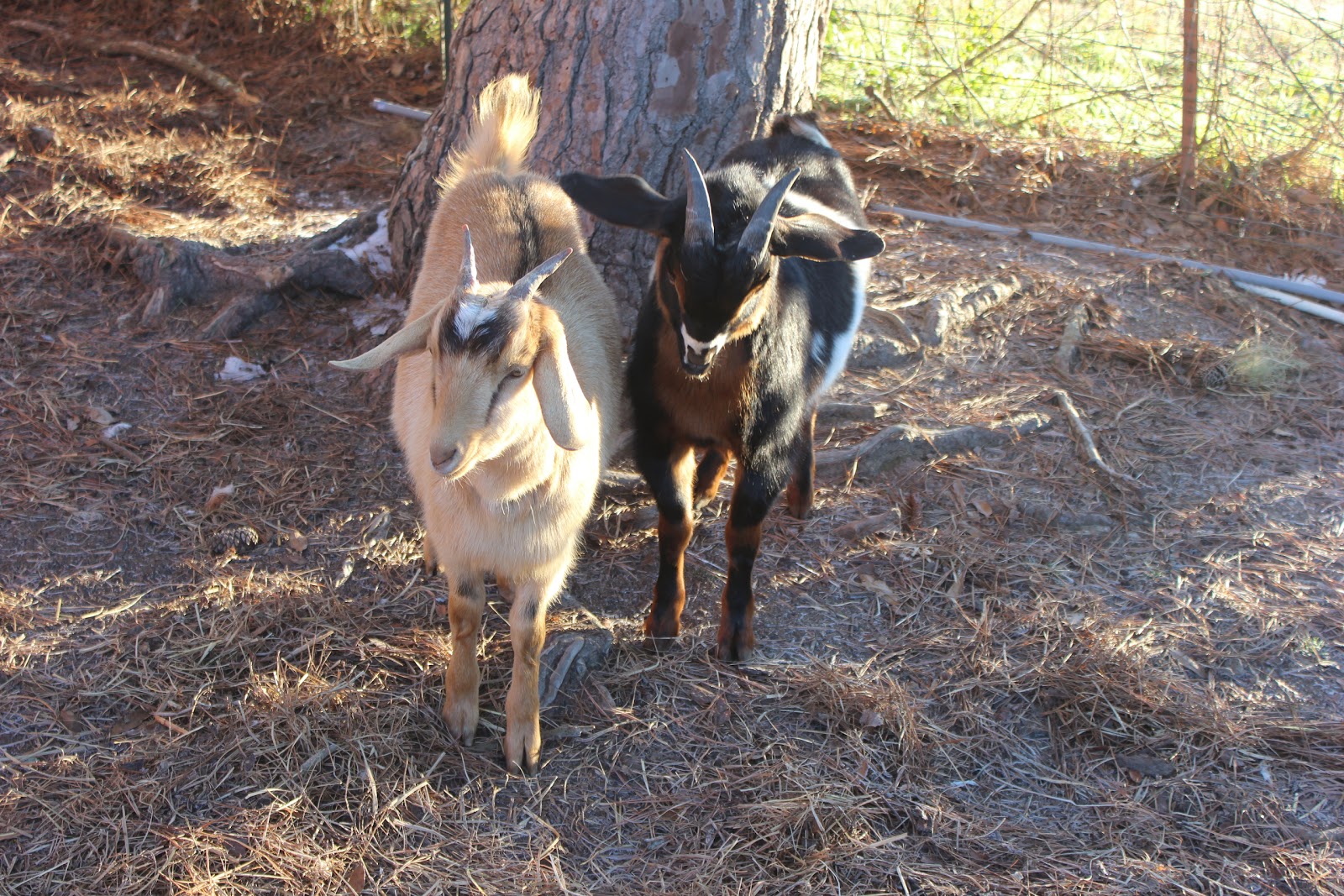 The goats do this funny thing when it gets cold that I have been trying to get a picture of forever. They seem to have the ability to poof out their coats all over their bodies and even their faces to stay warm. It makes them look like real live stuffed animals, and makes me want to cuddle them. It's just too cute. 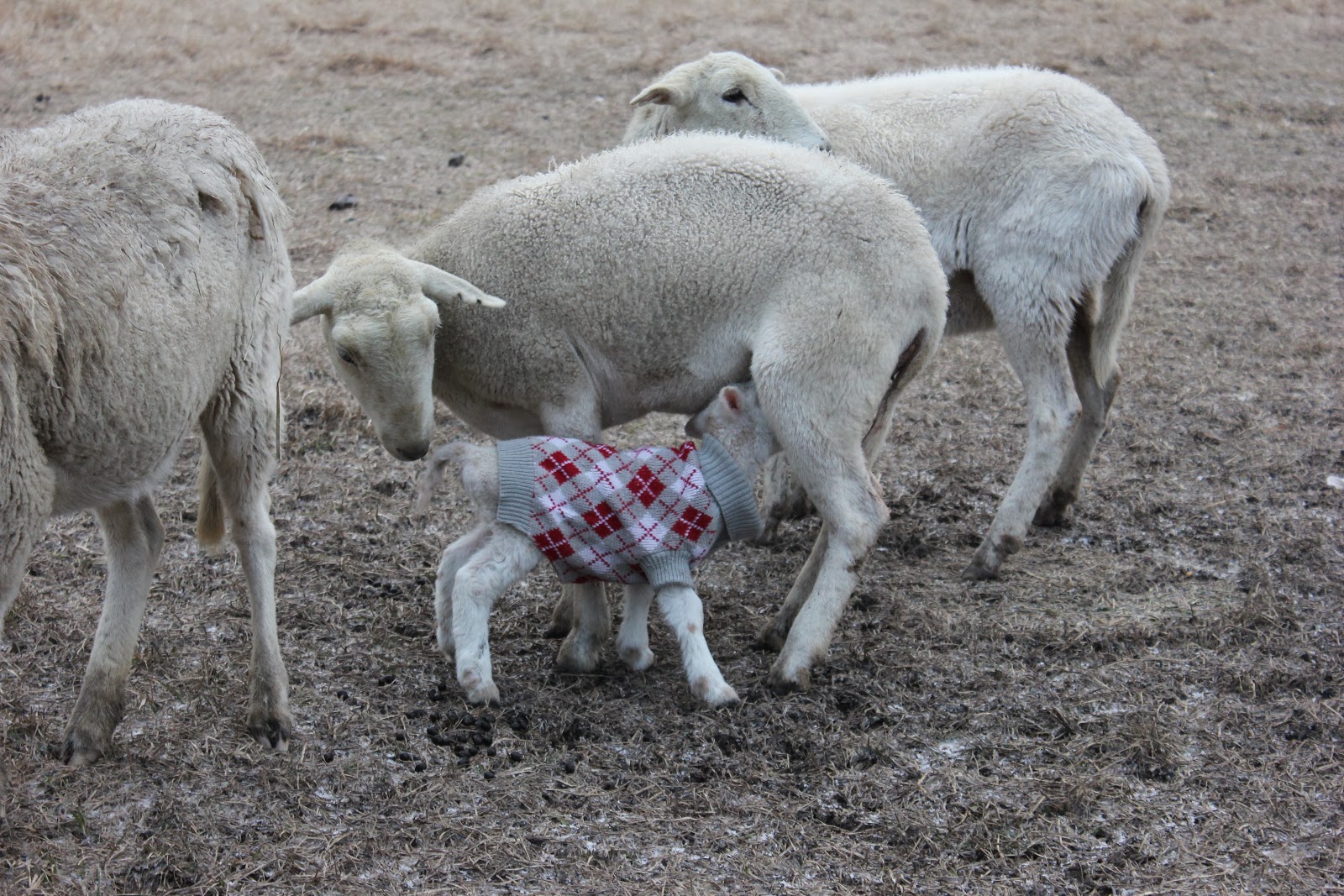 Speaking of too cute, could you just die?! Ninya had a little ewe lamb the day before the real cold hit. She's been a fantastic mother, but we were worried that that little lamb, who we are calling Bean,  being so young and tiny might end up getting wet and cold in all the sleet and freezing rain. Thankfully, I was able to find the dog sweater we used last year on the bottle lambs. 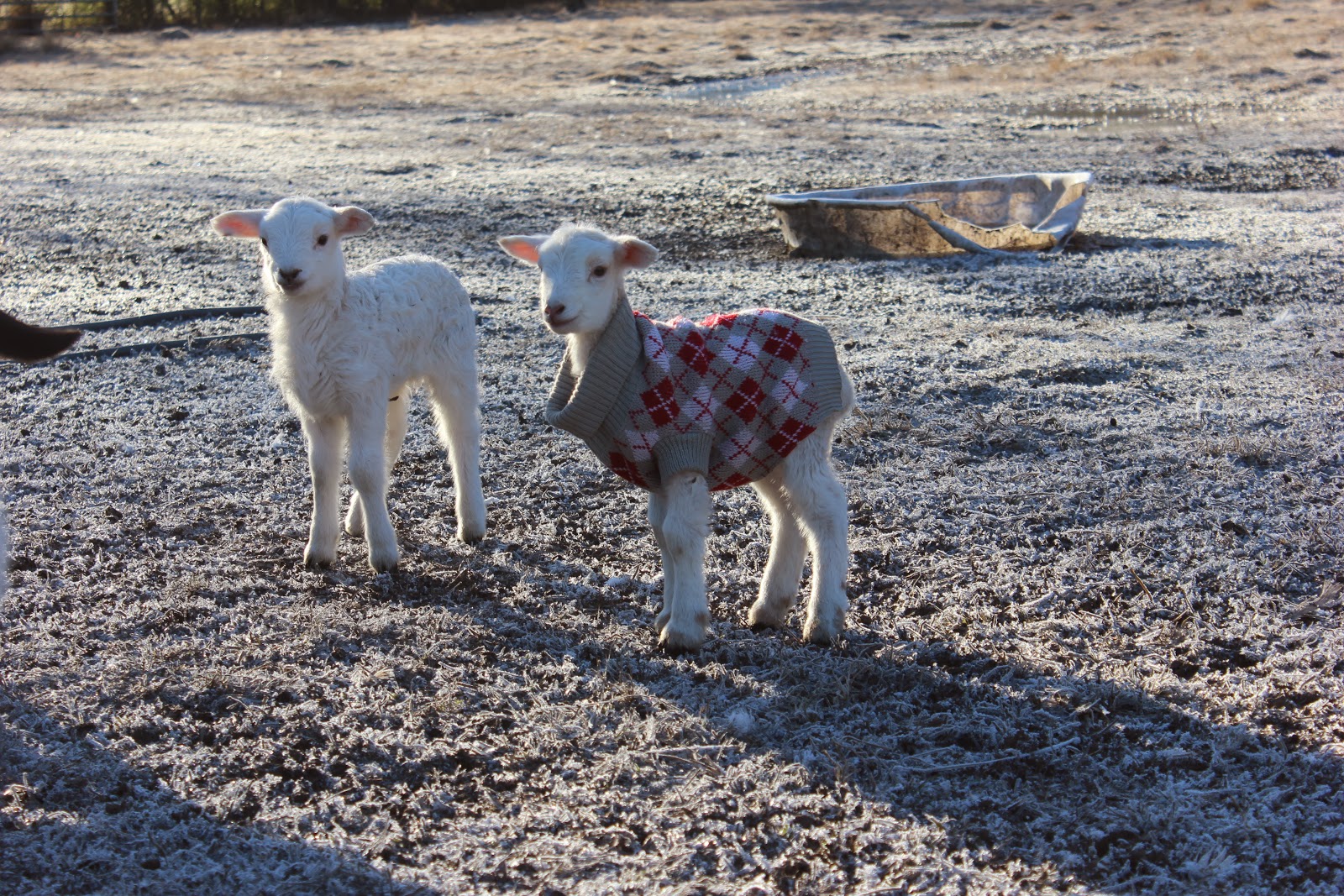 I was a little worried about mom rejecting the lamb since this would change her sight and smell, but Ninya took it in stride and that baby girl rocked that sweater all over the pasture for the next couple days. Seriously, this is way too much cute for one picture. 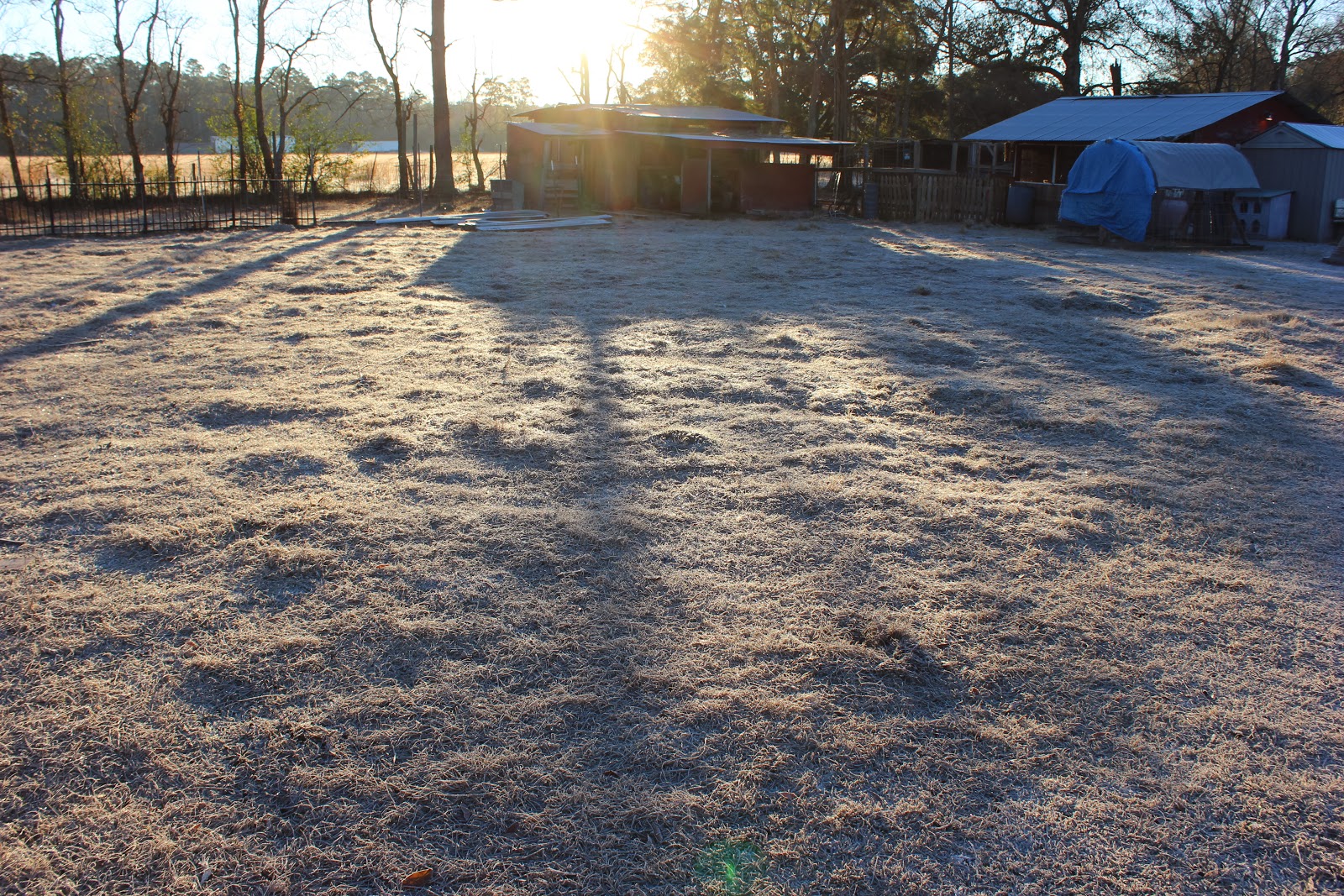 Yesterday morning, we had frost everywhere, but we were finally looking at the last of the below freezing weather at least for now. We woke to white pastures... 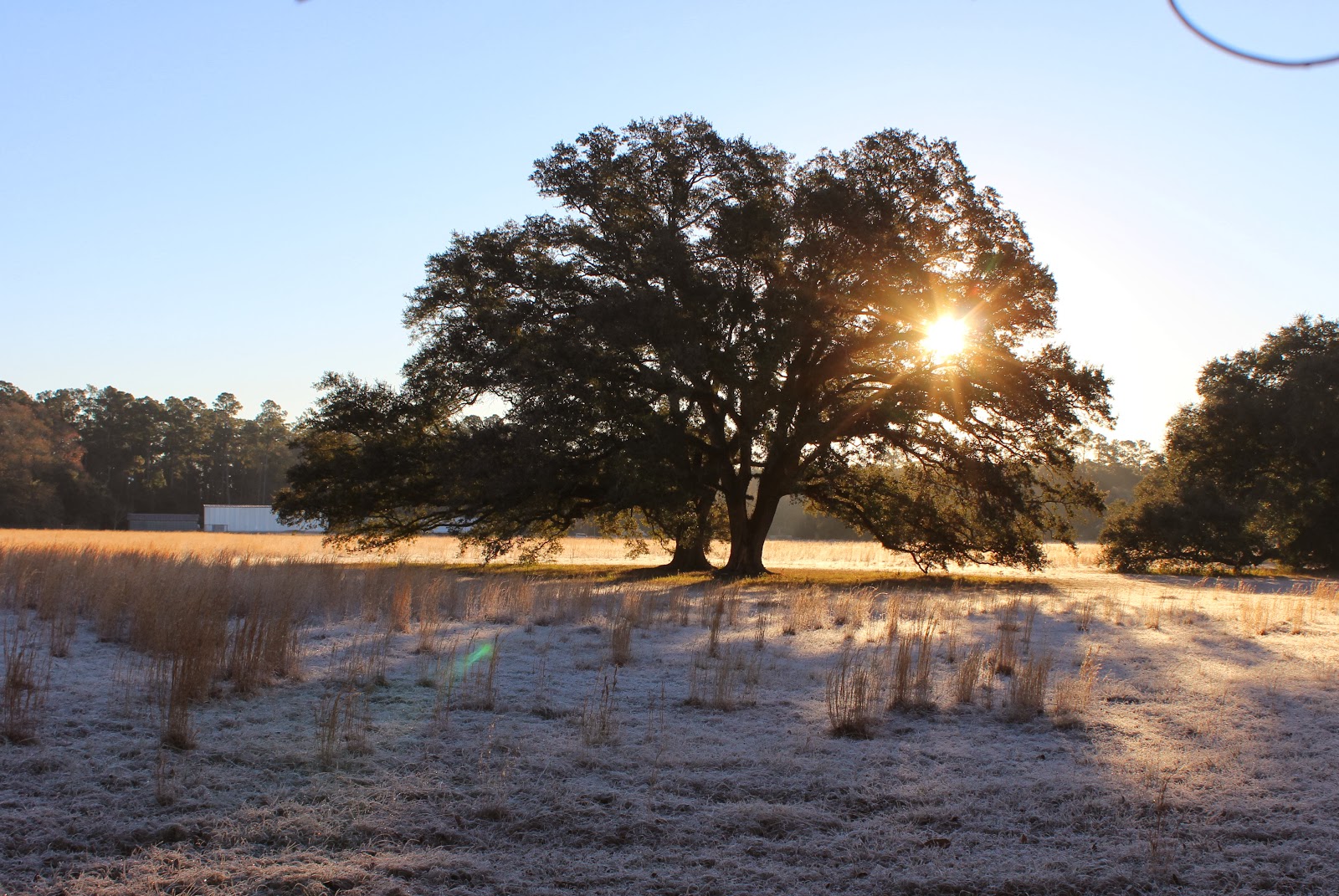 and this really pretty scene over the fence in the neighbor's hay lot.