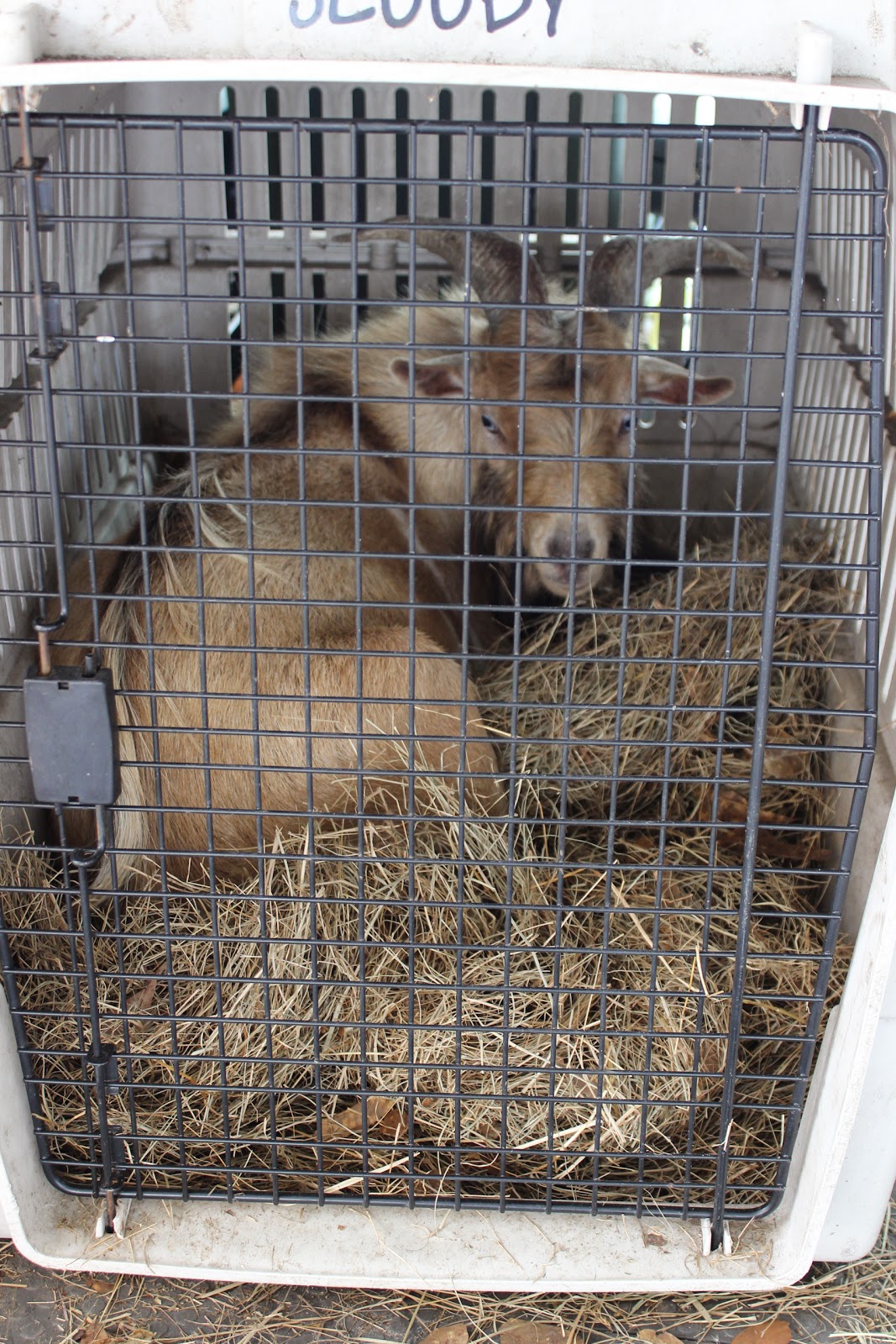 Look we what got yesterday!

We finally found a suitable boyfriend for our lady goats. We have been looking for just the right buck to bring on the farm for quite a while now and yesterday we think we found him! 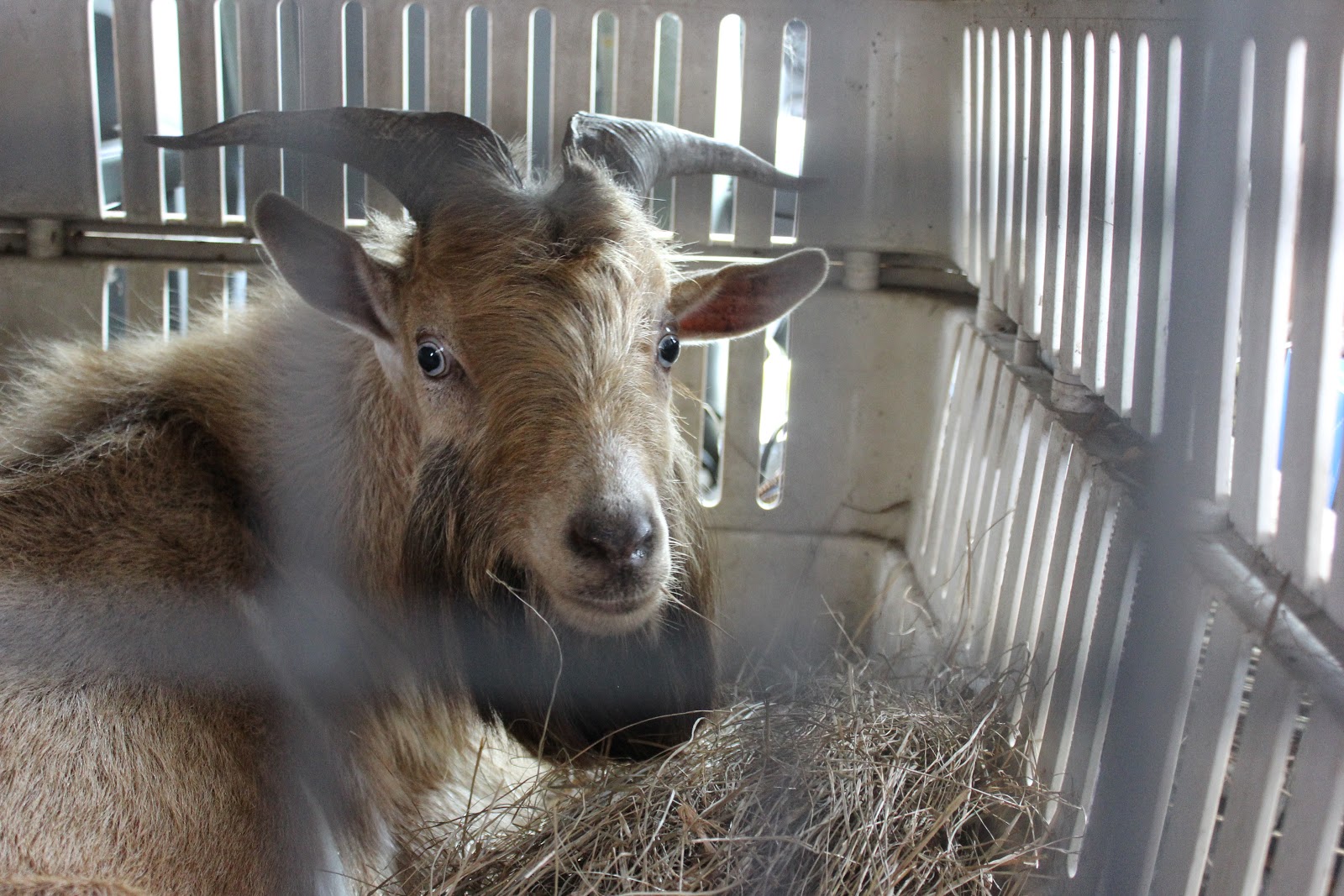 We needed a male that was small enough to safely breed with our mini goats like Gwen and Eve but big enough to physically breed the larger, taller ladies like Thea and Elanore. This handsome dude is a 3 year old Nigerian Dwarf. His previous owner was calling him Willie after a character on Duck Dynasty. He's a sweet boy with beautiful color and a great build. He's a little on the large side for the breed and he has experience breeding full sized goats in one of his previous homes, so we think he is just the boy we were looking for! 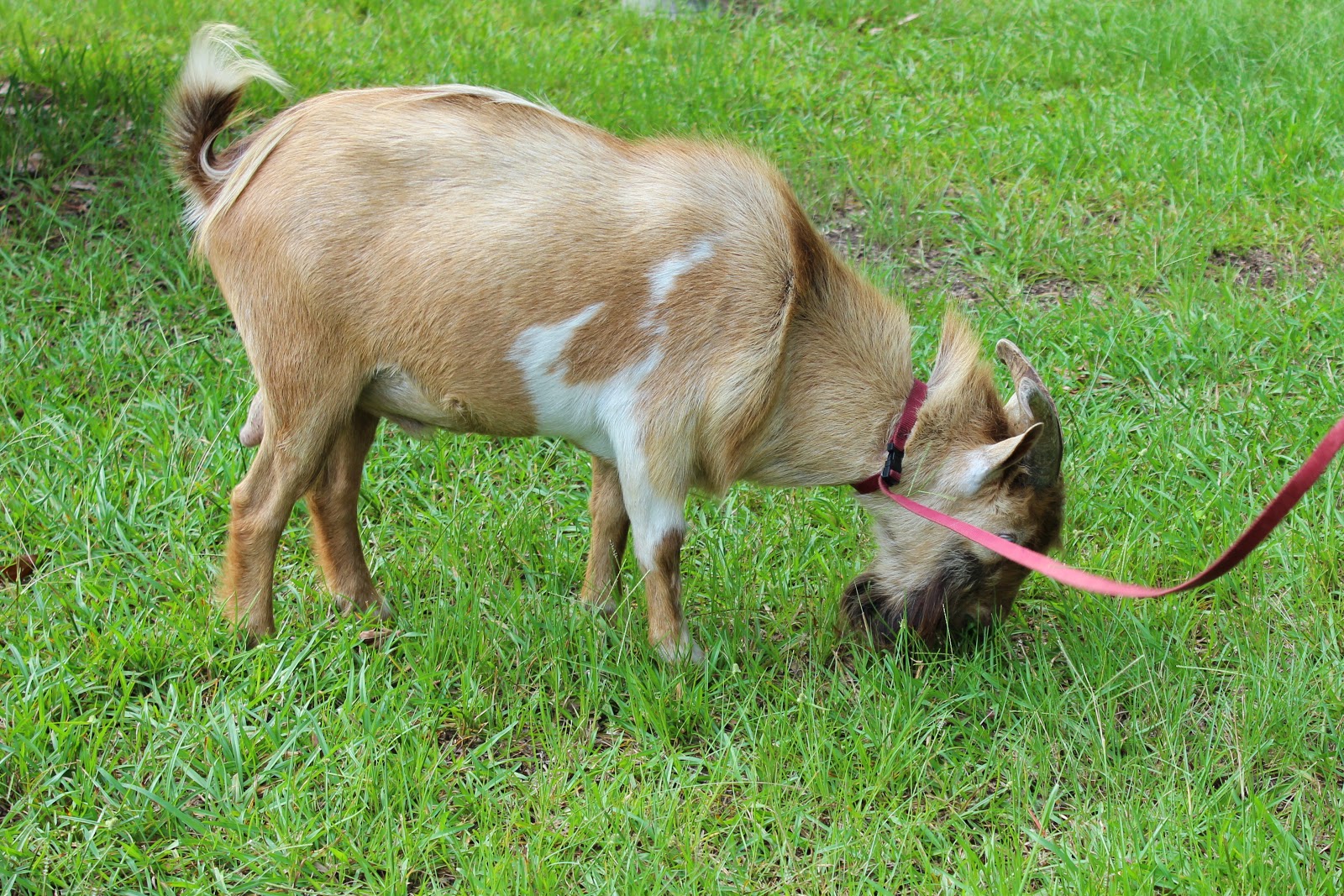 When we went to meet him, he happily took corn from my hand and stood still for us to attach the least. He was a little reluctant to walk with us to the car but hopped right up into the crate when he saw it was filled with hay. He happily munched on hay and alfalfa cubes on the hour drive home.
In his last home, the poor little guy really didn't have access to any greenery so the minute we got him out of the car he started chomping down on grass. 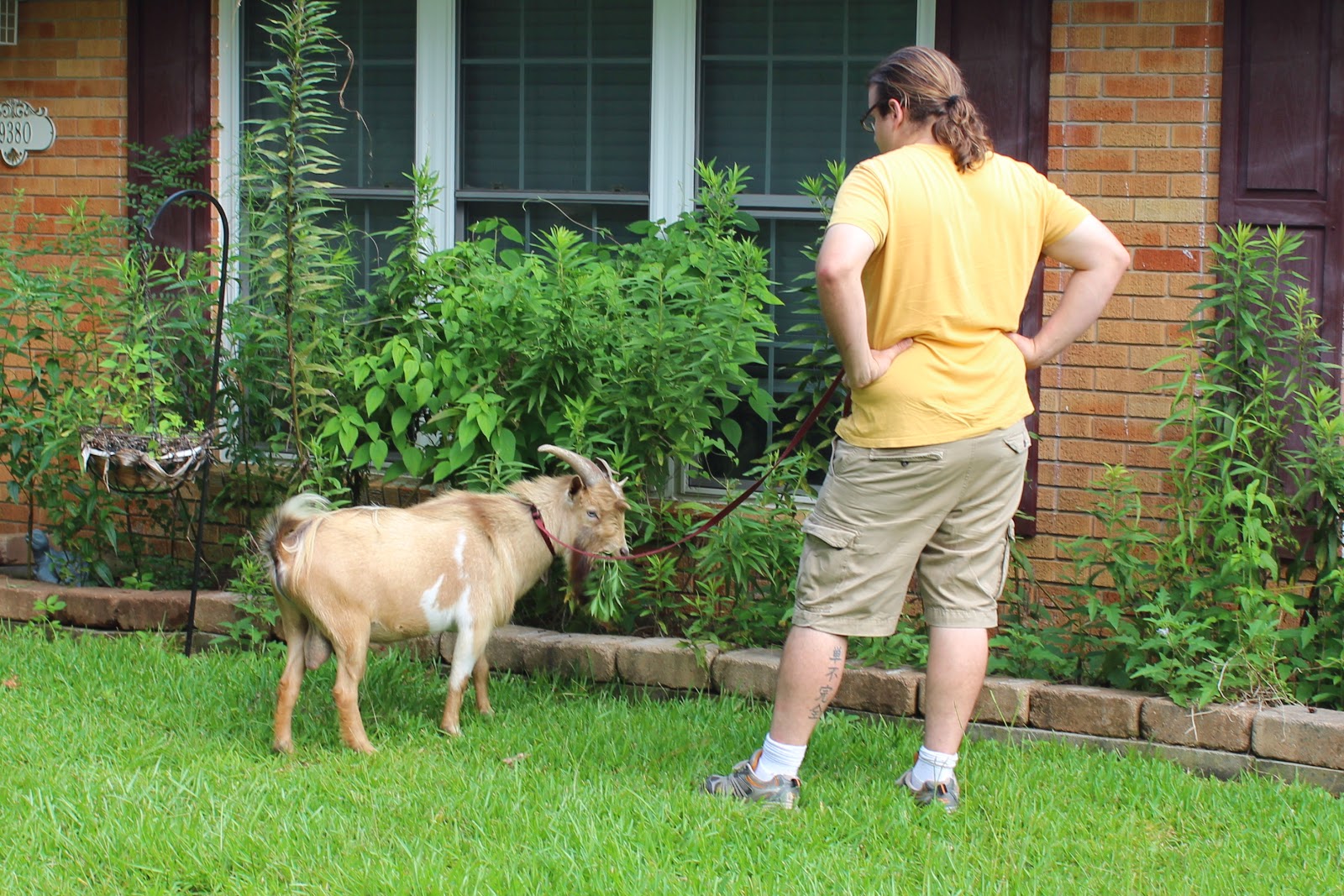 Big Onion brought him over to the "garden" in front of the house. Really it's just a flower bed that we don't maintain very well at all. Why waste time, money, and energy growing flowers when you can be growing goat food? He took no time at all to start chowing down on huge mouthfuls of everything in front of him. 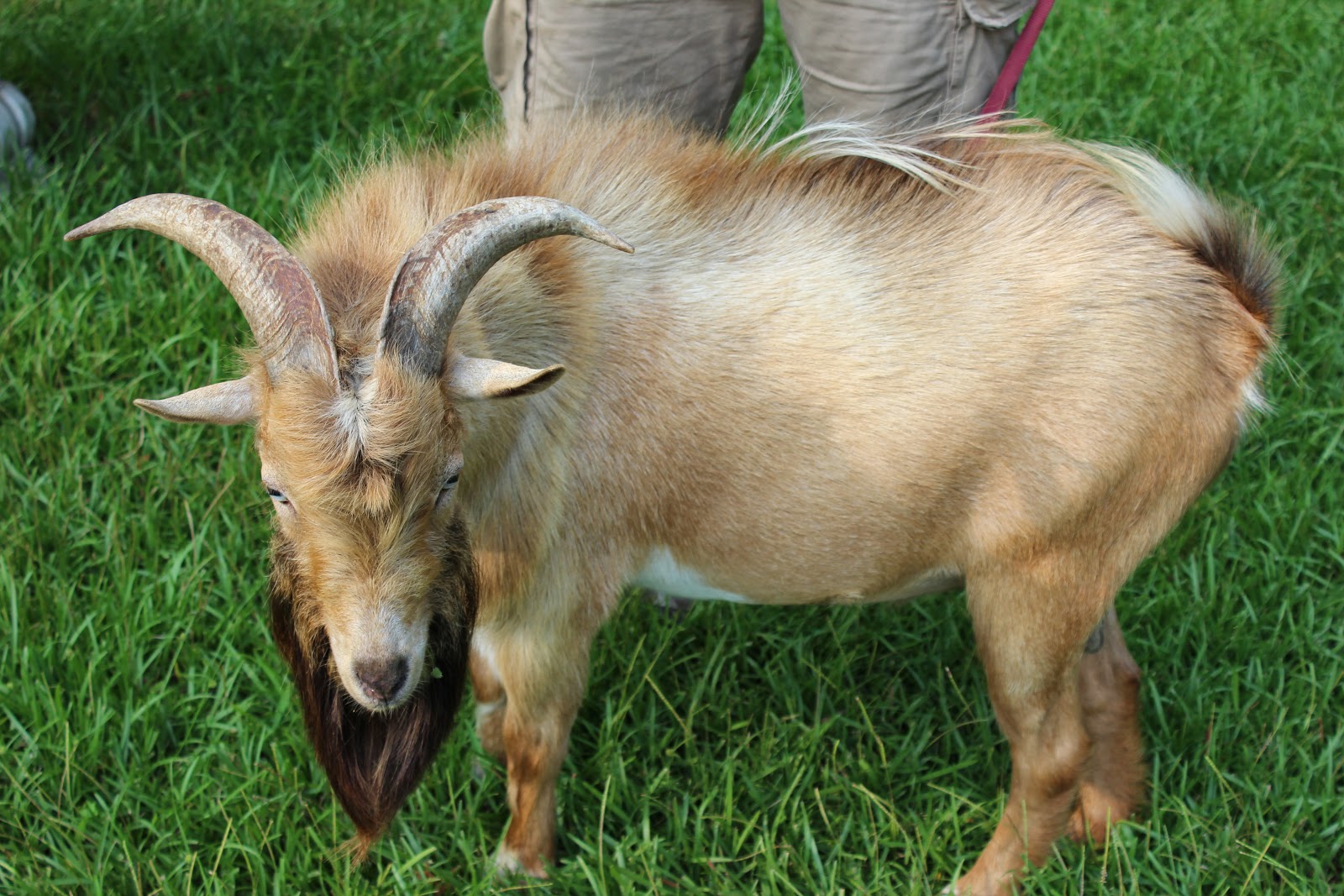 We have decided to call the little guy Gimli after the dwarf in Lord of the Rings. I think the name really suits him. I mean, would you look at that beard?! 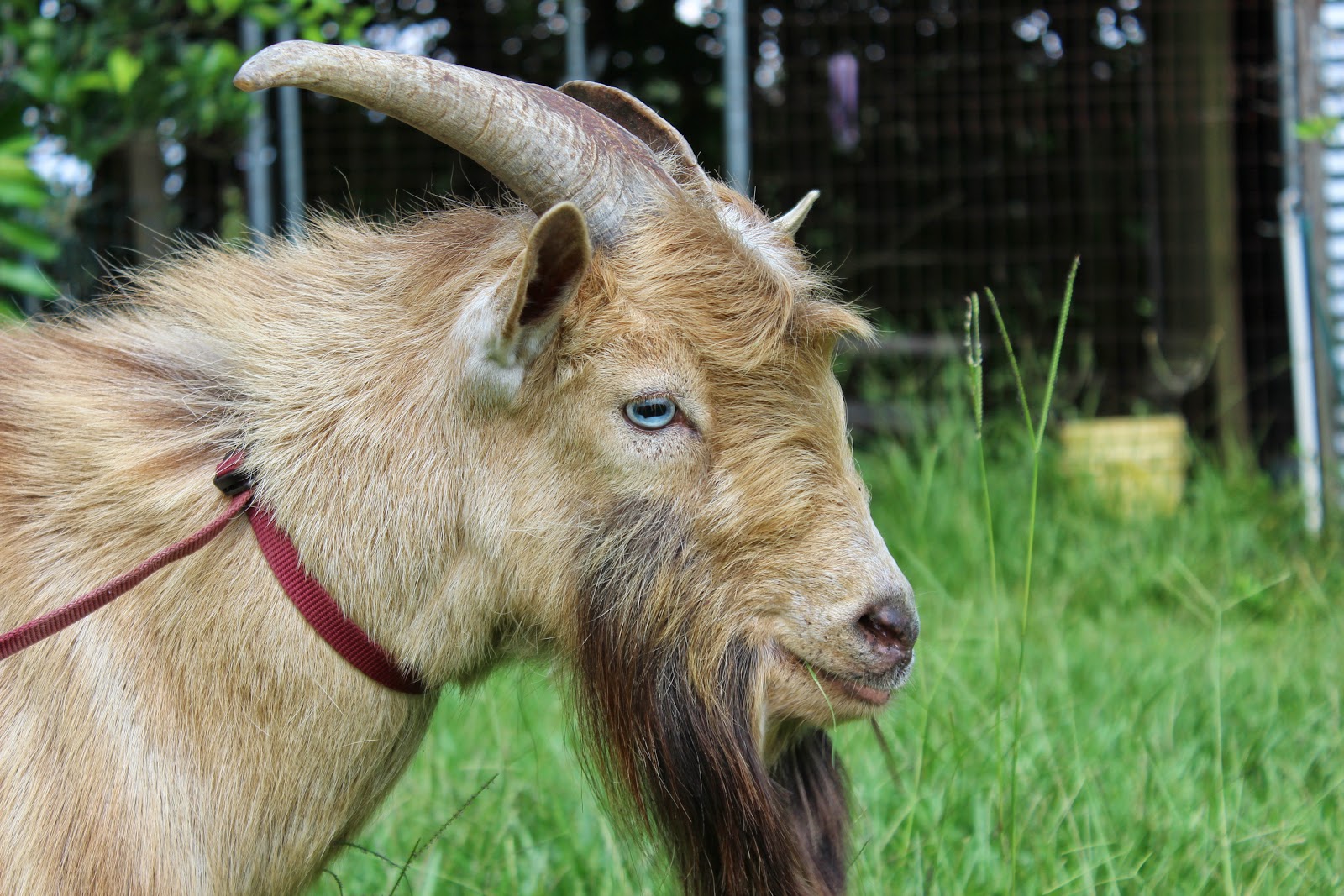 He also has blue eyes which is not something we were specifically looking for, but if we want to sell his kids (and we do) the blue eyed babies can often fetch a higher price.

For an adult buck, Gimli has been incredibly sweet so far. He walks well on leash and likes being around people. For these reasons, we suspect he was a bottle-raised baby. I may be a bit odd but I don't think he even smells bad. Of course all of this could change once he meets the girls and goes into rut. 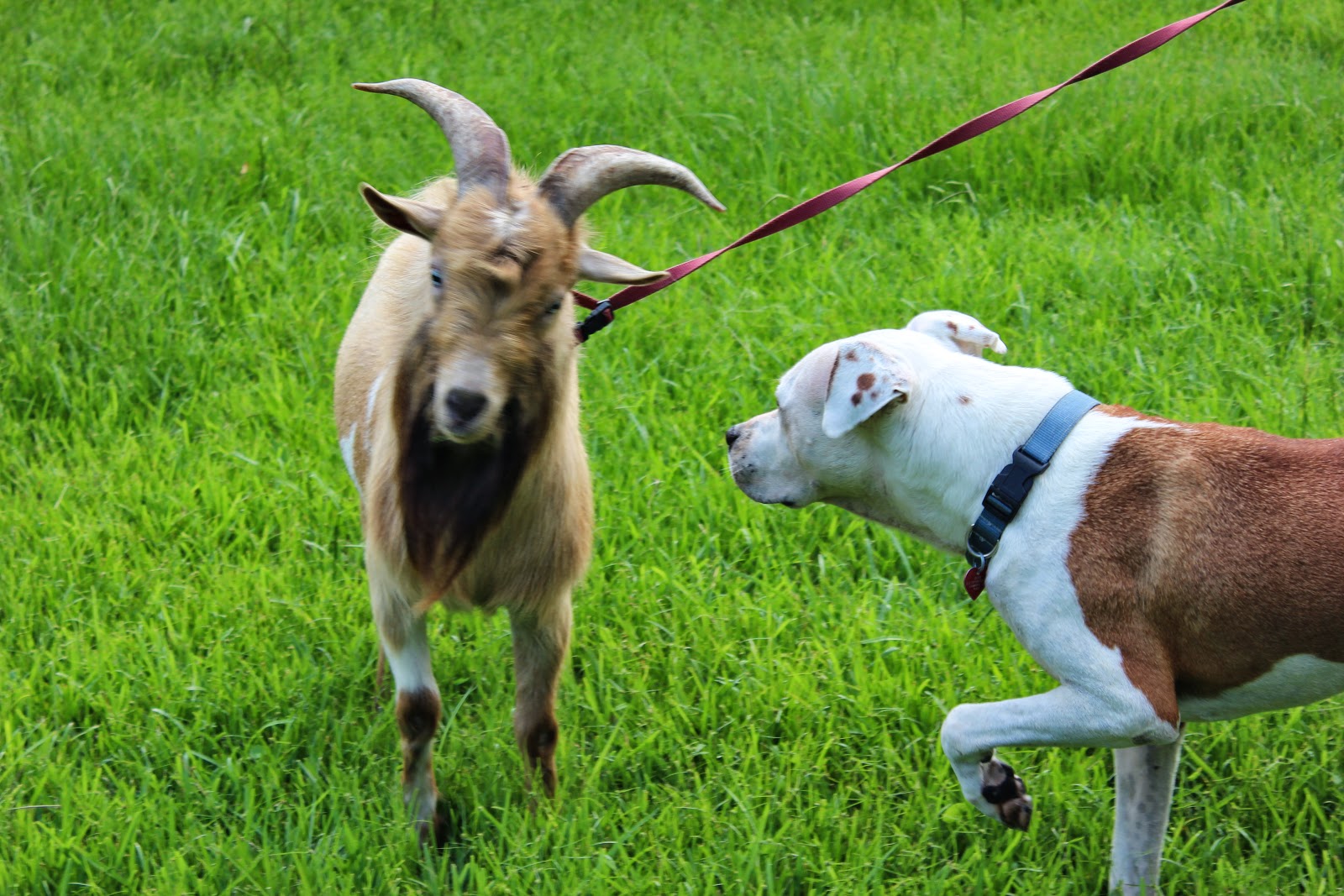 His first meeting with the dogs did not go so smoothly. Barley was being a bit pushy so Gimli dropped his head and gave him a little push back. I guess Rialey did not appreciate some new upstart of a goat threatening her friend so she ran in to defend Barley, circling with big barks and nipping at the goat's sides. Luckily we were able to diffuse the situation quickly, and no one was harmed in the scuffle. I'm sure it will take some time before Gimli will feel comfortable around the dogs, but at least he learned to have a healthy respect for them from the get go. 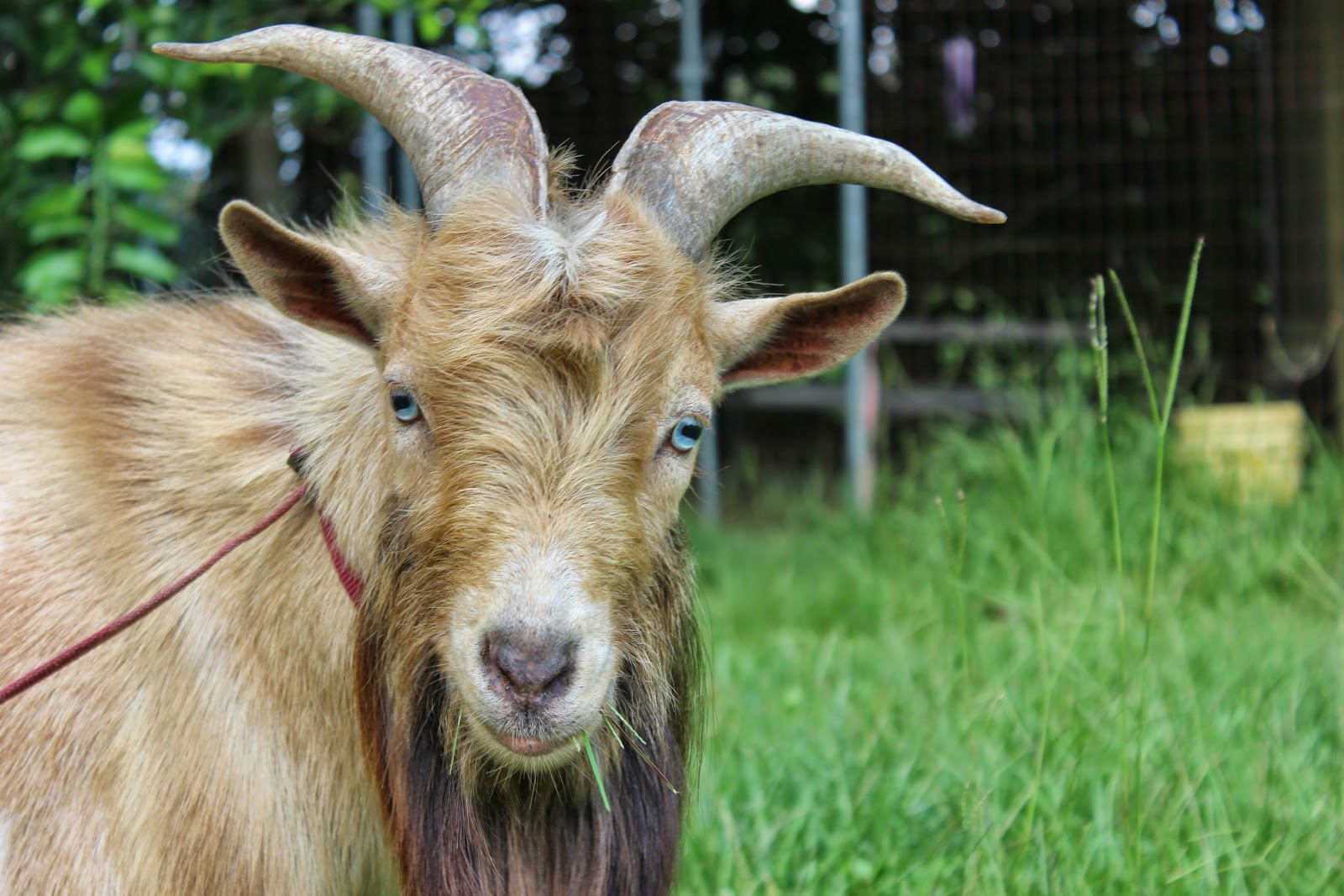 He will stay quarantined in the backyard pen for the next week so that we can get him cleared of parasites and make sure he isn't carrying any obvious illnesses. He is already causing a bit of a stir amongst the lady goats. Gwen was the first to catch a whiff of him. She spent the next several hours pressed against the backyard fence and making little goat love calls. I even caught her backed up to and peeing through the fence! The hussy!