I Didn't Know I was Pregnant: Barnyard Edition 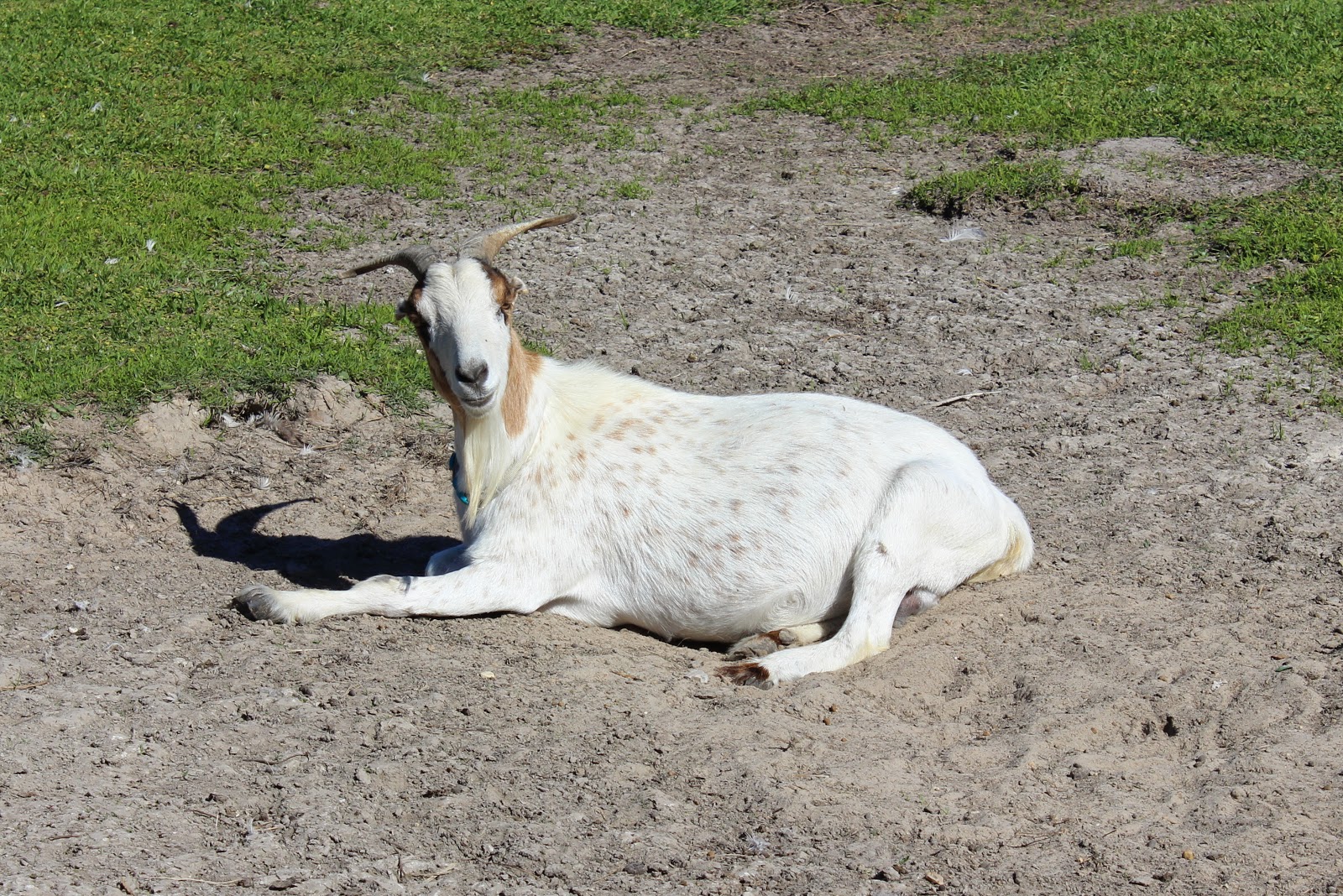 For the last couple months we had been watching Josie get bigger and bigger. Big Onion kept telling me he thought she was pregnant, but since we had neutered Luciano and the likelihood of a geep/shoat (that's a sheep/goat hybrid) is slim to none, I was sure she was just getting fat.

Well, last Monday evening I happened to see her walking by with a sharp lump sticking out of her right side. I'd seen that before. It was the shape of a tiny goat hoof pressing out from the inside. I grabbed her by the collar and started feeling around. Sure enough. There was at least one little creature inside our lady goat. Crap.

We got Josie on the milk stand and gave her a better look. Her udder (which always looks kind of full) was filling up more than normal and the ligaments above her tail were just starting to soften up. Not only was Josie pregnant, but she was due very, very soon!

Since Josie is CAE+, we had planned on not breeding her again. In order for her not to pass the potentially deadly virus on to her offspring, we would have to be there when the kids were born to keep them from nursing directly from her. Big Onion left work early Tuesday and planned on taking off Wednesday to keep an eye on Josie. He has never attended the birth of any of our goats, but we were both pretty confident in his abilities to handle the situation

Tuesday nothing really happened. Josie's udder got bigger and her ligaments got softer. She was laying down a little more than normal. Big Onion checked on her every few hours through the day and night. Wednesday I had to work so I had packed up my things and was headed out the door keys in hand when I got a message on my phone from Big Onion who was already out and checking on momma once again. It said, "She's laying down...now up...down again and pushing! Go time!"

I sighed, texted my coworker that I would be late, and headed out to the goat yard. When I walked in the room, Big Onion said, "Oh thank god!" I think he was little nervous about handling things on his own. 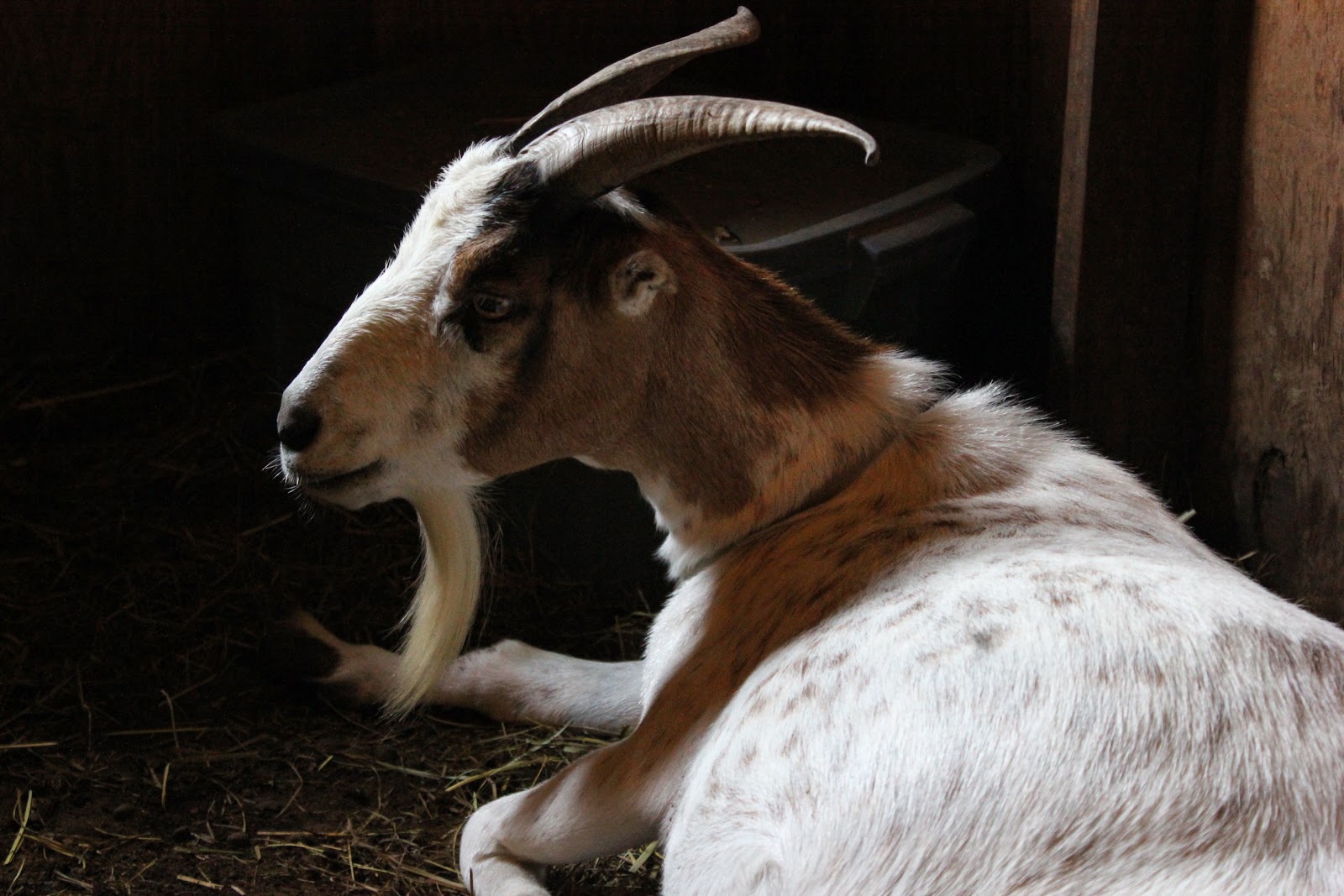 We watched Josie get up, lay down, push, mumble to herself, push some more. It seemed to take forever. About 40 minutes after her first push, we started started to see the bubble of the amniotic sac starting to emerge. Big Onion helped to break the sac, and it wasn't long before we caught a glimpse of a tiny white foot emerging then going back in with Josie's every push. After a few times of this, I told Big Onion to grab hold of the foot and don't let go!

Little did he know just how slippery unborn baby goats can be! It took a few tries, but he finally got a grip on the one foot and gently pulled while Josie pushed. Within a few seconds we realized what what wrong. Josie was giving birth to a kid with a head the size of a softball! It took some pulling on our part and some serious protesting on hers, but eventually the slimy little linebacker of a goat popped  out of her mother's backside.

I hardly had time to blink and Big Onion had that kid wrapped up in a towel and spirited out of the room. We've found that if you have to take a kid from a momma goat, it's best not to let her even lay eyes on it. The less time she has to bond, the less she will mourn for the lost babies. This is one of the many heartbreaking aspects of CAE. There is nothing we would love more than to let mother and baby stay together, but letting that baby nurse from its mother puts it at seriously risk of developing and dying from encephalitis at 2-4 months of age. That is not a risk we are willing to take.

While Big Onion was off drying off the baby, I stayed with Josie and started cleaning up. After seeing the size of that kid, I was pretty certain that Josie was only going to have the one. I was just starting to help Josie clean up her back end when she started pushing again. It is normal for the mother to have contractions to help her pass the afterbirth so I didn't think much of it...until I saw another intact bubble starting to emerge. I guess the way was cleared by that first behemoth of a kid because this second one all but flew out! Luckily I was there to catch it with another towel and had it out of the room lickity split! 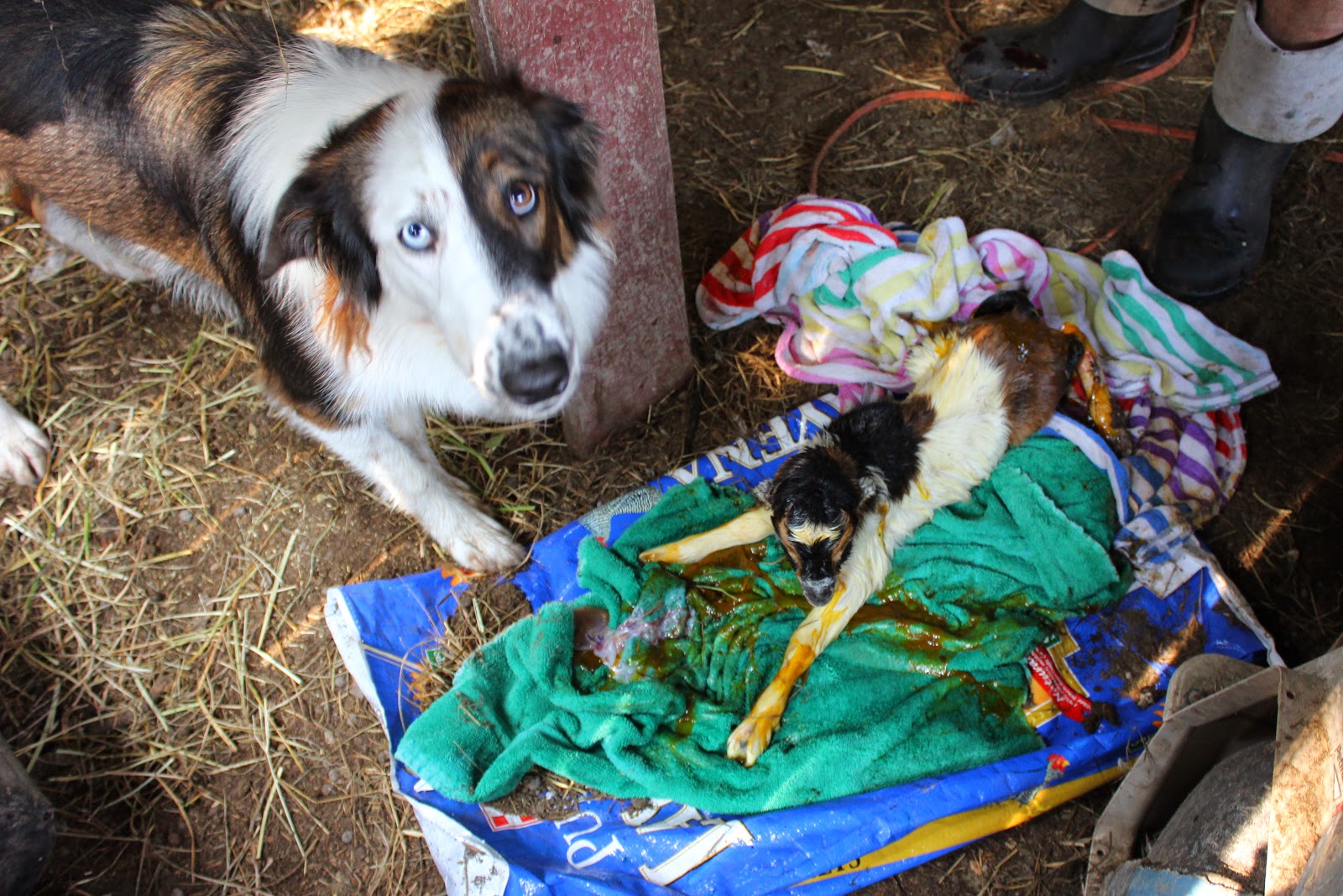 I found Big Onion and Rialey in the poultry house still cleaning and drying the first baby. He told me his was a girl! I plopped my slimy, wet bundle in front of Rialey for cleaning, took a quick peek to find out she was a girl too! Then I headed back to spend time with Josie. I think it's important that the doe not be left alone that this time. I sat close to her and quietly let her lick my hands and arms clean. 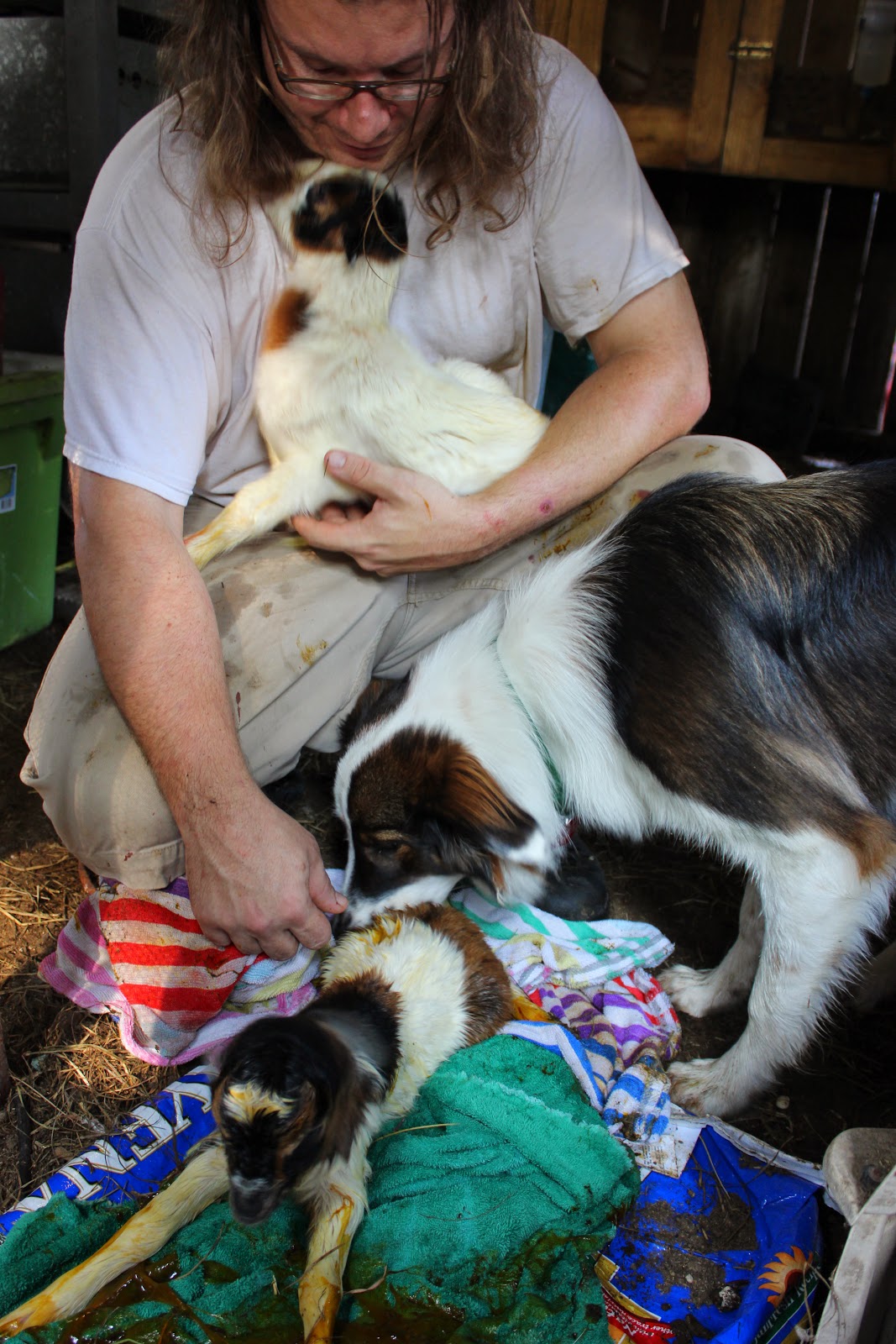 Once the babies were relatively clean, Big Onion headed to the house to prepare a bottle of powered colostrum and get the new little girls fed. I waitws for Josie to recover enough to get back up on her feet. With a little encouragement I got her up on the milk stand and milked out that all important first milk for the newborns. 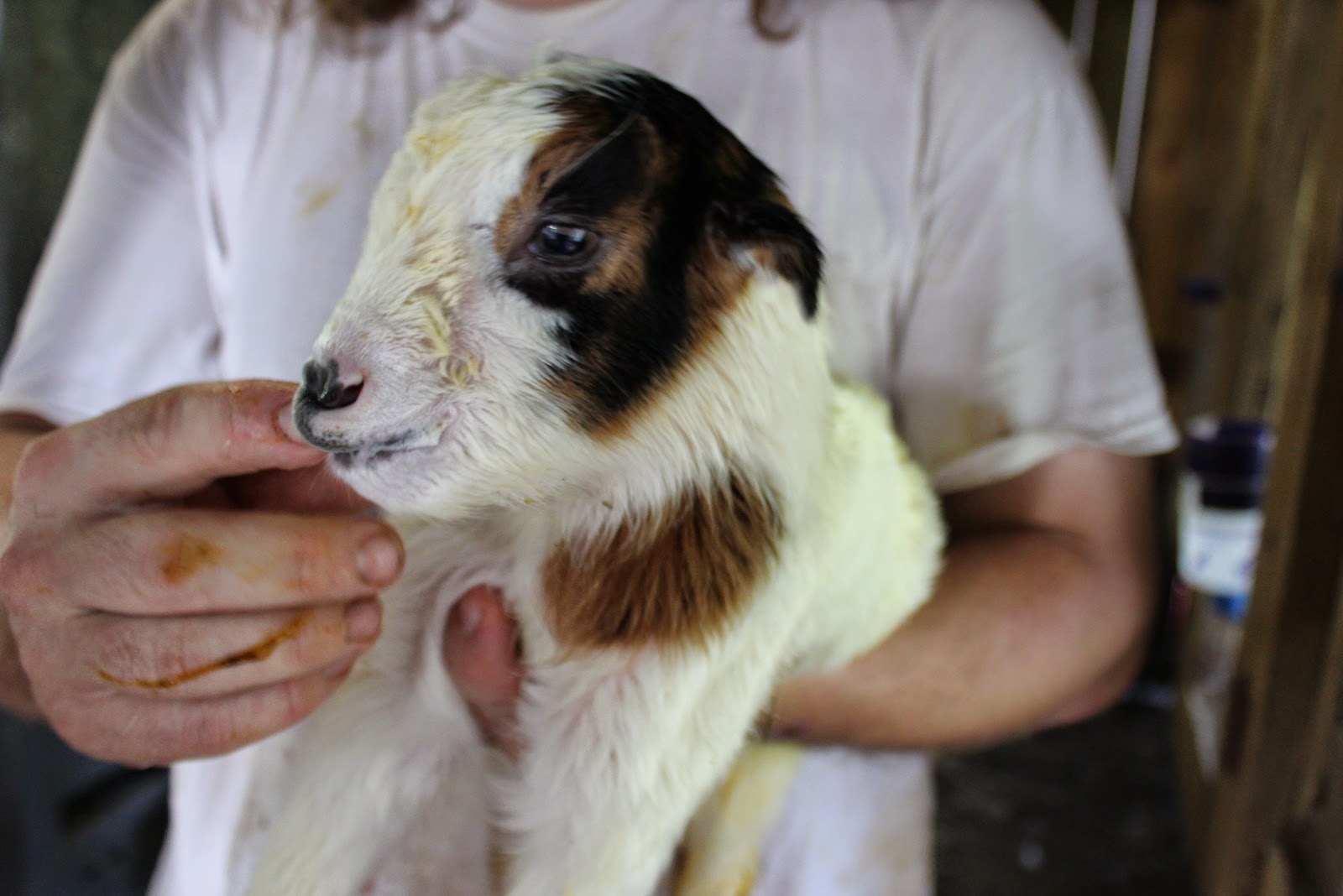 In order for it to be safe for the babies, CAE positive colostrum has to be heat treated. It needs to be carefully raised to 135 degrees and held there for one hour. We keep powdered colostrum on hand so that the babies don't have to wait for over an hour for their first meal. We learned last year that hungry newborns can stir up quite a ruckus. When I got back up to the house, both babies were clean, dry and snoozing with full bellies.

I handed off Josie's colostrum and gave my work clothes a once over. Miraculously, I had managed to keep my clothes clean through the whole messy process. I once again grabbed my bags and my keys and headed out the door leaving the twin doelings in Big Onion's more than capable hands.