A Baker's Dozen of Baby Sheeps

A few nights ago we got a call from the lady who sold us our original flock of Katahdin sheep. She had had a serious bout of bad luck. Her sheep decided to lamb during all that rain we had in the last few weeks, and she had been finding cold, abandoned lambs all over her fields. She was going out of town soon and asked if we would like to take the 13 surviving lambs. All she wanted in return was the money she had put into milk and supplies so far.

Big Onion and I talked about it. This would mean bottle feeding an entire flock of babies at least three times a day. Not to mention dealing with any health problems these babies were sure to have. It would also mean kicking the new goats out of the backyard pen way earlier than we were planning and trying to improvise some kind of shelter for them in less than a day.

In the end, we decided to go for it. Taking the lambs would effectively double our flock. It would also mean we would have lambs ready for market a lot sooner, and we are rather anxious to see some kind of return for our investment in sheep. My Element was still set up for livestock transport (with a tarp, bedding, and an x-pen in the back), so I made the hour and half drive to go pick up the babies on Thursday. 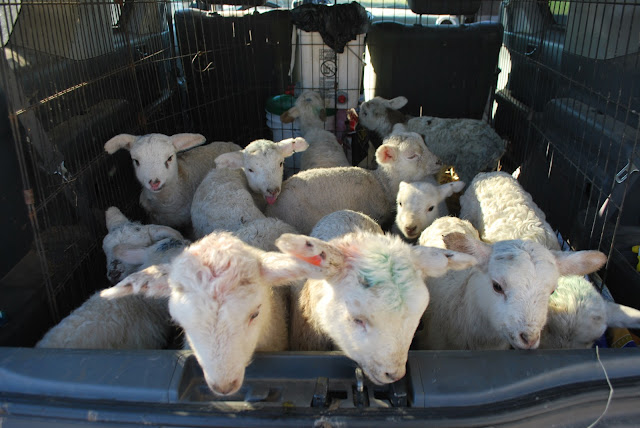 One car full of cute!

I particularly like the little tyke sticking her tongue out in the back there. 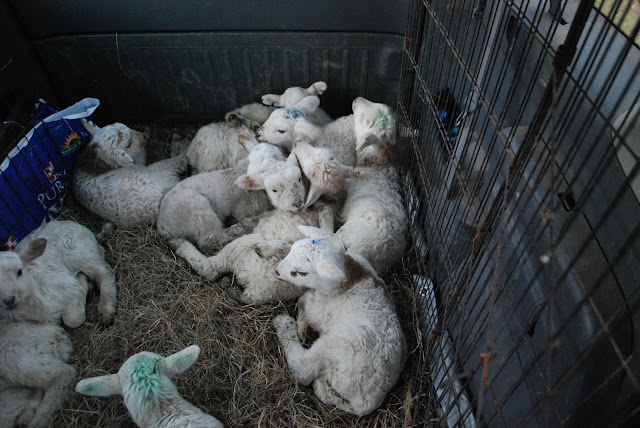 The lambs were little angels on the drive home. In no time they all snuggled down into the hay and napped peacefully while we drove. 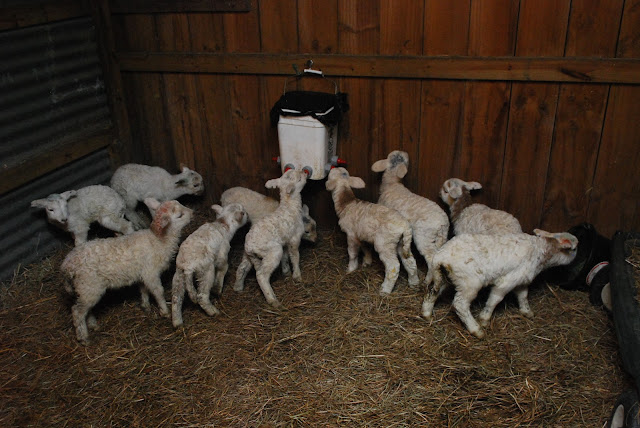 Belly up to the bar!

Behold, the lamb bar! The single greatest invention in raising bottle babies ever! Seriously, you fill this thing with milk and hang it a wall. That's it. 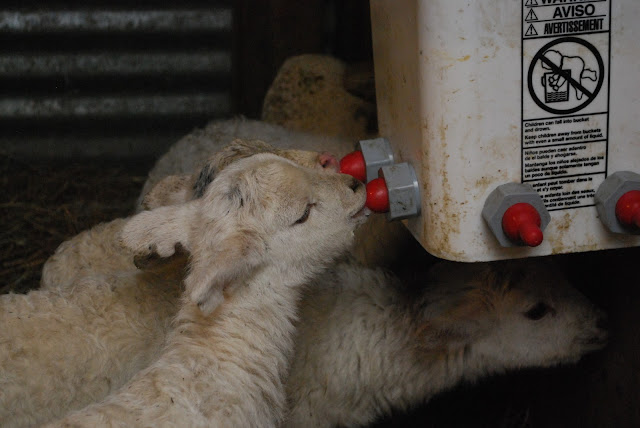 It is essentially a big plastic bucket with six nipples all around the bottom. The lambs are able to drink small amount whenever they want to just like they would with momma. 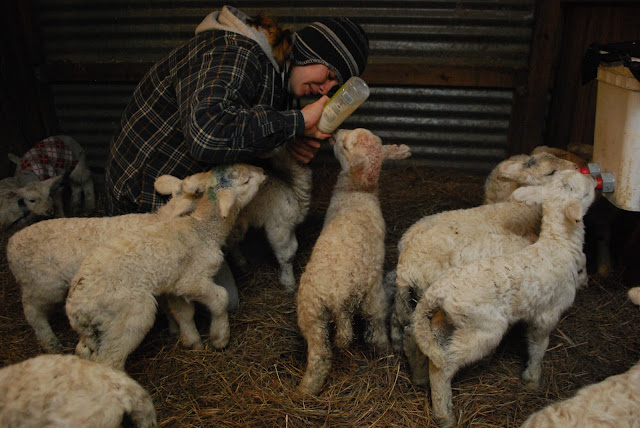 Unfortunately, not all the babies are used to or strong enough to use the bar quite yet, so there were still a couple that need bottle feeding. 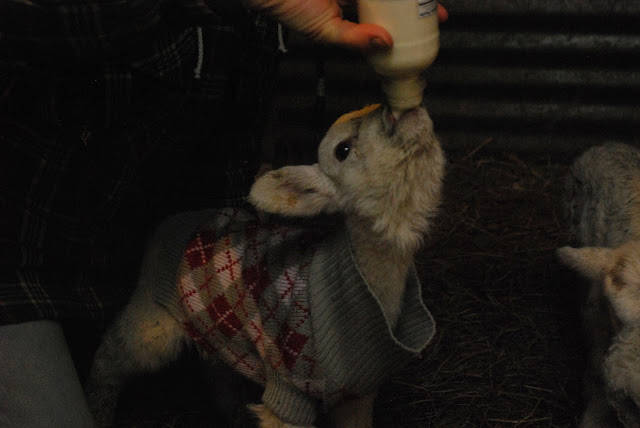 This poor little gal has almost no hair. She was standing around hunched up and shivering so she got to wear one of the dogs' sweaters. We are calling her Argyle for the time being. 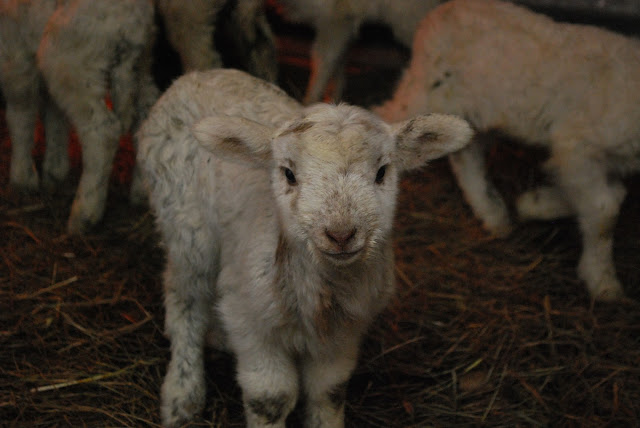 When I picked up this little girl, she was still being tube fed. I got a crash course on how to pass a flexible plastic tube down the throat and into the stomach to feed a baby who isn't strong enough to suck on a bottle. Thankfully, by the time we got home she was able to latch onto a bottle with a very soft teat and drink small amounts. 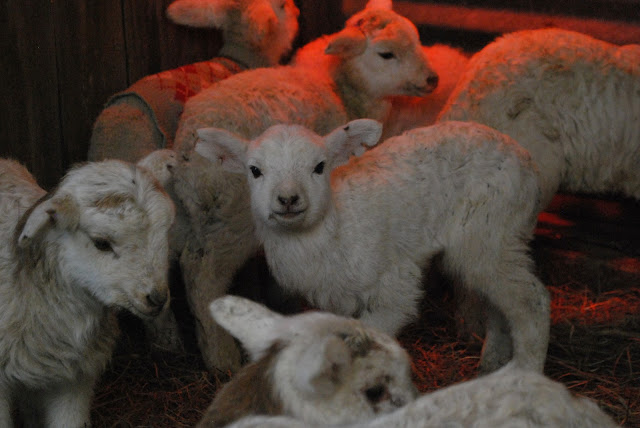 Most everyone else is doing well and fighting over the lamb bar every time we refill it. We still have a couple with dirty butts (a sign of loose poops) and a couple who are not as strong as we'd like, but every day we see improvements. 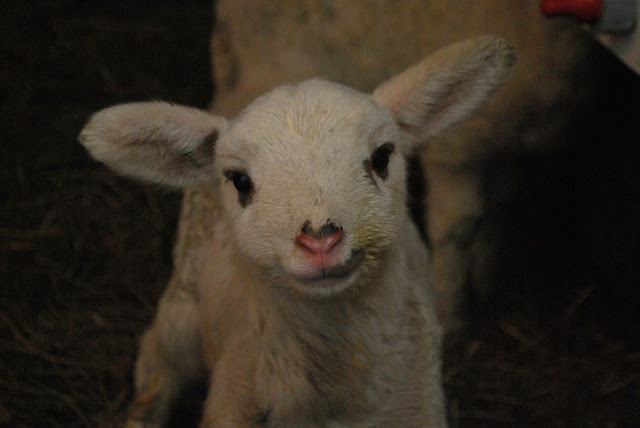 Doesn't this little gal have the cutest face!

There will be plenty more pictures soon, but for now here are a few videos that the Big Onion has taken in the last few days:  http://www.youtube.com/HighTailFarms
Posted by Kaela at 7:49 PM

Email ThisBlogThis!Share to TwitterShare to FacebookShare to Pinterest
Labels: lambs