With the press and craziness of the holidays, I have not had a chance to mention our recent losses here. A couple weeks ago, our poultry were under attack by what was probably a raccoon. It started with one of our remaining two turkey hens. She didn't seem right, was having trouble walking and breathing with an open mouth. We put her in a pen by herself with fresh food and water, but she steadily declined over then next 24 hours and ended up dying the following afternoon. At the time we thought she had fallen victim to our overly large tom's first attempts at breeding his hens.

Shortly after that I found a guinea dead in the pen with its head pulled through the wire and missing. The pen door had also come open and next to the pen was our remaining turkey hen with part of her neck and back missing and her detached head sitting next to the body. This was very upsetting because we had planned on keeping our two turkey hens with the hopes of getting hatching eggs from them in the spring. I was also rather fond of those girls.

The next night, we heard a commotion out back. I quickly pulled on my boots and called Luna, my right hand dog, and ran out to find a headless guinea still in the pen in the throws of death. That night I resolved to rewrap all the pens with an extra layer of chicken wire. I figured our nighttime bandit had had his meal for the evening and so would leave our poultry until morning. I was wrong.

The following morning, I was going through the normal chores of milking the goats, feeding the rabbits, and letting all the poultry out to forage for the day. I went into the chicken pen to see if any of the girls had laid that early in the day. I turned the corner and what I saw brought tears to my eyes and some seriously fowl language to my lips. Fernando. Fernando, our awesome rooster, was laying on the  floor of the pen without a head, white feathers everywhere.

This was a heart breaking loss. Fernando was everything you could ask for in a rooster: attentive and protective of his ladies, calm and gentle with humans, dogs, and other birds. He was also beautiful. He was huge, easily 15lbs, with beautiful white plumage and a huge red comb. He was our first rooster and had fathered many chicks for us.

At his point, I was spitting mad. I double wrapped every pen in chicken wire. I went to the feed store and bought a nasty looking trap. We locked up Hunter, our barn cat, for the night and put out the trap.

Unfortunately, we didn't catch anything, but the next morning we did see a big dead 'coon on the highway. We've had no more losses since Fernando, so maybe that was our culprit or maybe the extra layers of wire did the trick. Either way, deaths like these are always upsetting and hopefully we've seen the last of the nights of the headless poultry for a while. 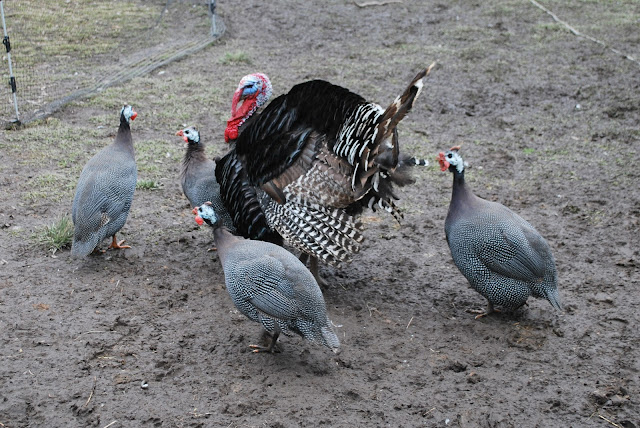 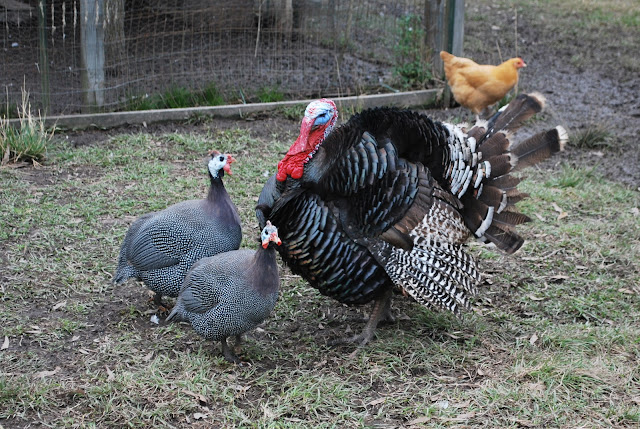 The last turkey standing is our giant tom. The remaining guineas follow him around like a celebrity and his entourage. Every morning they precede him out of the pen and run around the corner to announce his coming with chorus of "CAH! CAH! CAH! CAH! CAH!" I've even seen them out there preening him, fussing over his chest and tail feathers like a stylist at a fashion shoot. Hilarious.