I just recently posted about how our Josie is getting very large with her pregnancy, and I want to talk about her again. The beginning of this week we had a major scare with the poor girl.

It was Monday morning, my normal day off work, and I was out doing my chores when Gwen walked up to me asking for her breakfast. I noticed that there was something on her side. It looked kind of green and dry and crusty. I didn't think much of and went about letting out ducks and bringing feed to rabbits when I noticed Josie laying in the field. Now this is not unusual. The goats tend to laze around until they hear me open their feed bin for breakfast in the morning. What was unusual was that Josie's normally white beard looked kind of...green. 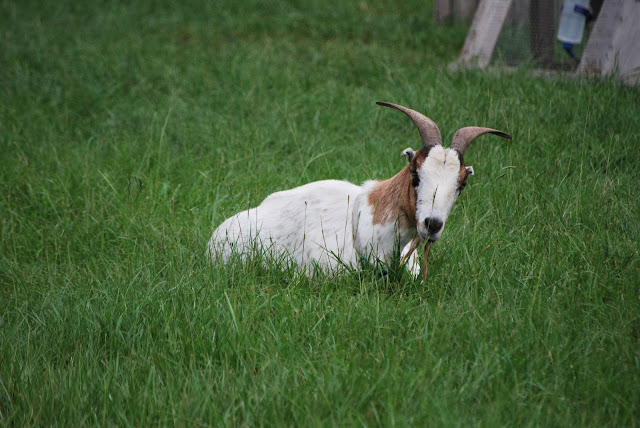 The day before, Big Onion and I spent most of the day cutting, de-stemming, coring, grinding, and juicing all those ground fallen pears from the tree in the back yard. So that morning, I brought out all the pear cores, stems, and ground leavings for all the animals to enjoy. I offered a small handful of ground pear to Josie. Normally, she loves the pears and will scarf down any she can get her mouth on. This morning, she gave it one sniff and backed away quickly. Totally not interested.

I shrugged and went about my day, resolving to check on her again that afternoon. Well, by the time I got back to checking on Josie again, she was looking really bad. It was now clear why Gwen was speckled with crust, and Josie had a green beard. Josie had apparently been vomiting since the night before. Now goats don't exactly vomit, not like we do. It's more like they bring their cud up into their mouths then open up and sling to glop all over the place. Trust me when I say that you do not want to be in the splash zone of a sick goat. 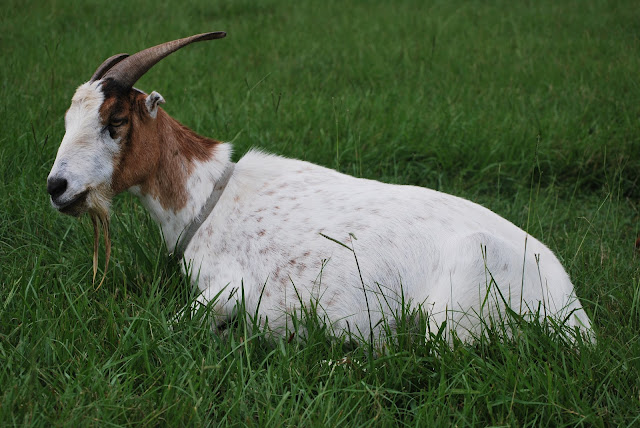 That afternoon Josie had covered herself in her own sick. She was hugely pregnant, slinging cud everywhere, grinding her teeth, squatting frequently, and making these terrible little distressed goat sounds.

I tried giving her baking soda and some cooking oil in case she was bloating. Both things seemed to make her feel worse. We were especially worried because she was so pregnant and seemed to be feeling really, really terrible. I finally called my wonderful local, large animal vet. After talking to him for a few minutes, we came to the conclusion that Josie had probably eaten too many ground fallen pears the night before and since she was so pregnant, the fermentation of the sweet fruit in her already compressed gut was making her sick. He suggested I give her a shot of Banamine, an anti-inflammatory, to help relieve some of the pain and bring her in the next morning for fluids if she hadn't improved. 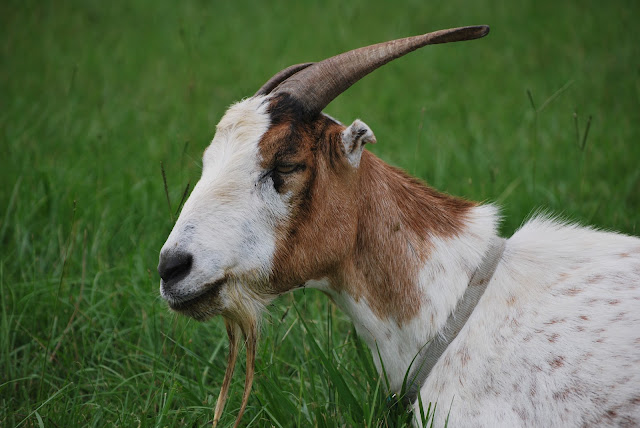 The shot seemed to help a little. Within an hour she was nibbling on some grass in the pasture and resting in the shade. That night she wasn't at all interested in eating dinner which was fine since the vet said no grains until she was feeling better, but she seemed to be feeling just ok.

Late in the evening, I went back out to check on her and as I walked out, I heard Rocky, our buck, calling and calling. He took one look at me and ran back to where Josie was standing in the corner of the goat room. I guess he was worried about his favorite lady. Josie was back to grinding her teeth, vomiting, and making those heartbreaking little sounds. I gave her another dose of Banamine and a mouthful of Pepto bismol. I texted my boss and coworkers and said that if my goat wasn't better by morning, I was going to take her to the local vet. My boss (who is a homeopathic vet, but primarily treats small animals) texted back suggesting that I give Josie a dose of the homeopathic remedy Sepia.

Now I don't know if it was the remedy, the pepto, or the second dose of Banamine, but by the next morning Josie was just about back to her old self. She met me at the back gate begging for breakfast. I gave her a small handful of alfalfa hay and a good grooming to clean all the sick off her coat. She had somehow gotten her cud on the BACK of her horns. Amazing.

By that evening, it was like nothing ever happened. She was back to beating up the other goats and waddling around the pastures like the queen of the barnyard that she is. She only has about two and half weeks until she is due and already her udder is filling with milk. We'll be on kid watch very soon and until then, you can bet I'll be picking up any extra pears that come within reach of the goats.
Posted by Kaela at 3:50 PM