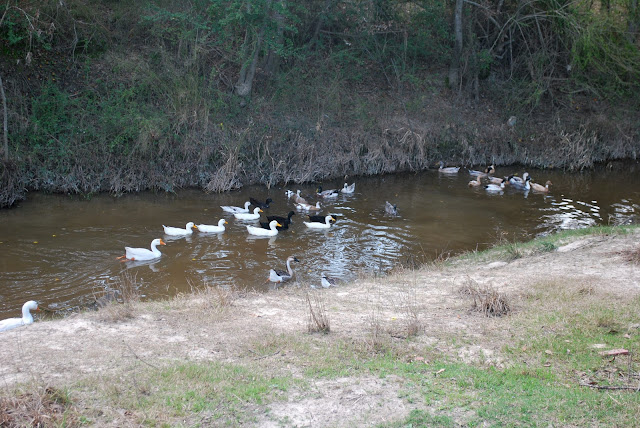 We have been having a problem with the ducks getting into the creek that crosses our property for quite a while now. We even tried putting up a fence to keep them out, but the holes in the fencing were big enough for the determined little waterfowl to slip through. Lately they have taken up the habit of swimming up the creek and getting into our neighbor's yard. It's not far from there to the very busy road in front of our houses so last weekend Big Onion put up a second layer of chicken wire in front of the existing fence.

This seemed to work like a charm. All was going well until a couple of nights ago when we were putting the birds away for the night, and Big Onion noticed a couple chickens on the wrong side of the fence unable to come back thru. He went over to investigate and found not only the two Buff Orpingtons pacing the fence line but also about 7 ducks happily swimming back and forth in the creek. Apparently these birds had crossed the bridge and gone down to the creek from the other side. We knew from experience that if we left those birds out overnight, all we would find of them the next morning would be a pile of feathers. 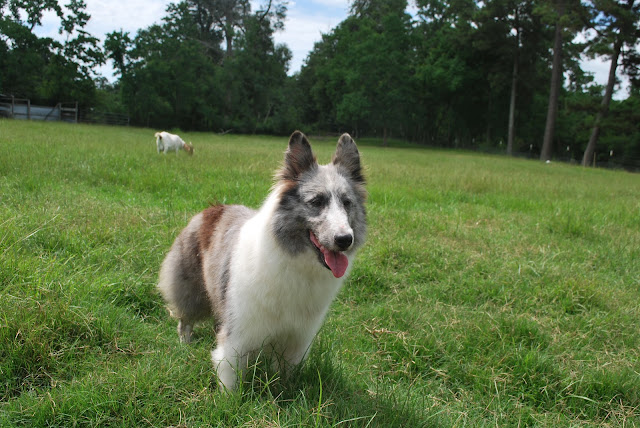 It was getting dark fast so I called over Luna, my right hand dog, and the three of us swung into action! Big Onion turned off the electric line that run over the top of the fence. I picked up Luna and tossed her over the fence (thank heavens for farm dogs in small packages) and hopped over it right behind her.

First order of business was the two chickens. Luna employed a very handy skill the two of us recently discovered and took no time in herding each chicken right into my hands. I handed them over the fence to Big Onion and then the fun really began.

By this time the ducks had made their way down stream all the way back to the third pasture. Luna and I made our way back there to try and cut off the ducks from going any further away while Big Onion opened up the fencing underneath the bridge and started calling and scattering feed.

Luna and I got to the back pasture and climbed over another length of thankfully un-electrified fencing and found ourselves in the evil enchanted forest of gigantic thorn bushes of doom. While I torn my clothes and skin, jumped a large drainage ditch, and swore a blue streak questioning the intelligence of ever getting ducks in the first place, Luna easily followed behind occasionally shooting me a bewildered look for all my complaining.

By the time we emerged to where the ducks had been, they had already gone back up the creek and were swimming in circle underneath the bridge while Big Onion waved a large stick at them to keep them from backtracking. Stupid ducks.

Luna and I ran back across the bridge, hopped the fence again, found another stick and started trying to shoo the duck up on shore and under the newly opened fencing. They were having none of it.

It was clear that we needed a third party on the other side of the creek to push the ducks out of the water. It was getting dark, and we were getting desperate so I decided to try and send Luna over there. On command she scooted under the fence, back around behind me, over the bridge, and down then steep banks on the other side. 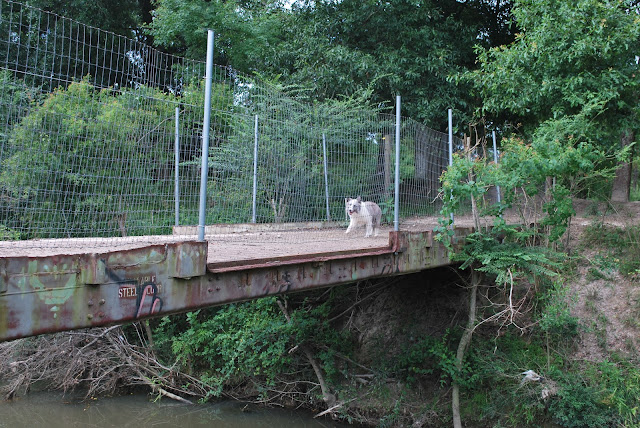 Luna tried her best to push on those ducks from the shore, but try as she might they just wouldn't budge. She looked at me and I looked at her and we both knew what had to happen. I said "OK" and my brave sheltie girl plunged into the water after her ducks! There should be a title for underwater duckie herding. 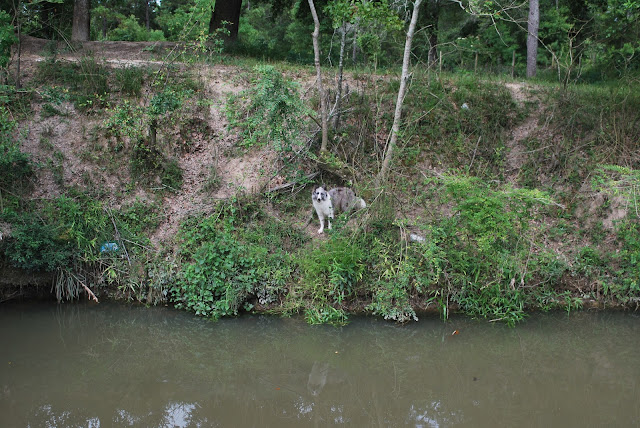 It took a few tries and in the end, me actually throwing a stick into the water, but Luna herded 5 of those ducks onto the shore opposite us then pushed them right across the bridge and back to the safety of their pen.

We still had two little black cayuga girls left swimming around and though we tried every trick in the book, there was no convincing them to come out of that creek and in for the night. It was dark, and Luna had jumped into and out of the creek, climbed up and down the steep backs, and run back and forth across the bridge god knows how many times so we threw in the towel and went back to finish up chores for the evening. I had to call Luna off those last two ducks 3 or 4 times. She was not happy about leaving any of her stock in danger.

While we were working we heard the unmistakable quacking of an upset female duck on the move. One of the cayuga girls had found the opening in the fence and made her way home on her own. To this day, we are still not sure what happened to the other girl.

Luna is the real hero in all of this. She worked as smart and as hard as any farm dog could. She took direction from me in a situation that there is no way we could have predicted or trained for. The first time she took off across that bridge on command, my jaw about hit the dirt. At the age of 8, she didn't hesitate for a second to do anything I asked, taking commands across a creek and even IN the water, climbing up and down steep embankments, jumping into and out of the creek over and over again. She even woke the next morning to help herd up and hold the sheep for a worming. 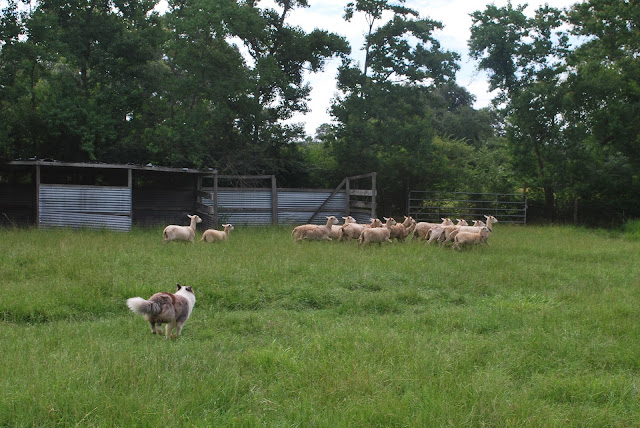 I know I've said it before, but I really don't know how we would run this place without her. As time goes by, she and I become a more and more seamless team. She is right where I need her when I need her from letting me know about an errant chick that needs saving to shooing the bottle lambs out from under my feet to protecting me from that stupid buck who thinks rearing up at me when I have the feed bucket is a good idea.

Since she is 8, soon it is going to be time to start training her successor. I don't know if I will ever find another dog as in tune with me. She is ready to work at my merest whim and just as happy to be by my side doing nothing. I have to give my thanks to Claire over at Golem Kennels for making this blue girl exactly to order 8 years ago down to the color of her eyes!


Hey Luna, how do you feel about them ducks getting in the creek?... 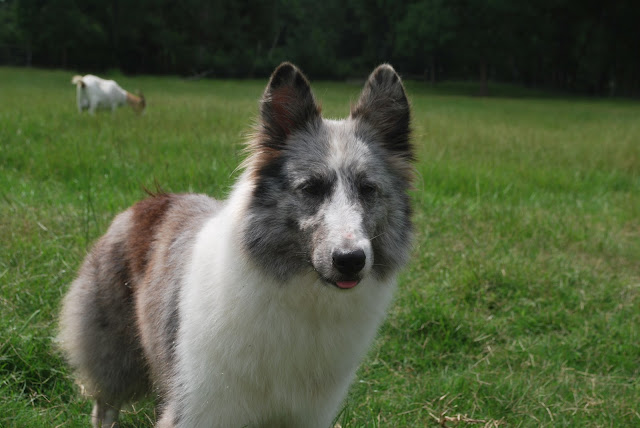