The other day I made my usual run to the feed store and picked up  several various bags of poultry, rabbit, and goat feed. Normally I use the four wheeler to move the feed from my car in front of the house to the farm buildings behind the house and backyard.

On this particular day, I gathered the bike and gate keys, pulled on my farm boots, and headed out back to the bike. I took minute to clear the small, round, brown presents the goats love to leave all over their favorite lounge chair and hopped up onto the bike. I should have known that something was amiss when the thing started up on my first try and didn't die once while I backed it out of the overhang and navigated across fields and through the pasture gate.

I parked the bike right behind my car in the driveway and left it running while I proceed to load it up with about 300lbs of feed. Just as I was dropping that last bag onto the back rail of the idling bike, the thing coughed once then died. Crap.

Not to worry, the four wheeler is a fickle thing that is prone to dying at random times if not properly warmed up. As my father says, "She's cold natured." No kidding, dad.

I hopped on the bike and tried to start it, no go. Sputter, sputter, sputter, but no turn over. I open the gas tank and stare down into a bottomless, gasless vacuum. Double crap.

Grab the key out of the bike and dash around the house, the backyard, and the farm hopelessly searching for a gas can that actually contains gas before someone noticed the unattended bike sitting out front. No luck. I run to the neighbors' place to borrow some. No one is home.

So now I have a huge, dead four wheeler loaded with 300lbs of feed that is dead and blocking my car in the driveway. Not to mention the fact that we needed all that feed that day, and I am in no shape to lug that kind of poundage that kind of distance, let me tell you!

I call Big Onion at work in a panic just certain that I cannot push this huge thing anywhere and if I leave the bike unattended in the front yard for even as long as it would take to run down the road to the gas station some ne're-do-well will happen upon it and somehow steal the dead thing right off our driveway. I had a brief vision of leaving Luna on the bike to guard it while I ran for gas. Like that would deter anyone.

Big Onion talks me off a ledge. He tells me to unload the 300lbs of feed, and just push the bike out of the way of my car. It's going to be fine, he says. I follow his instructions and the beast of a bike is mercifully easier to move than I had expected, toss a couple empty (why are they always empty?!) gas cans into my car, and hightail it to the nearest gas station where I somehow manage to splash gas all over the back of my drivers seat and myself while loading the gas cans back into the car. 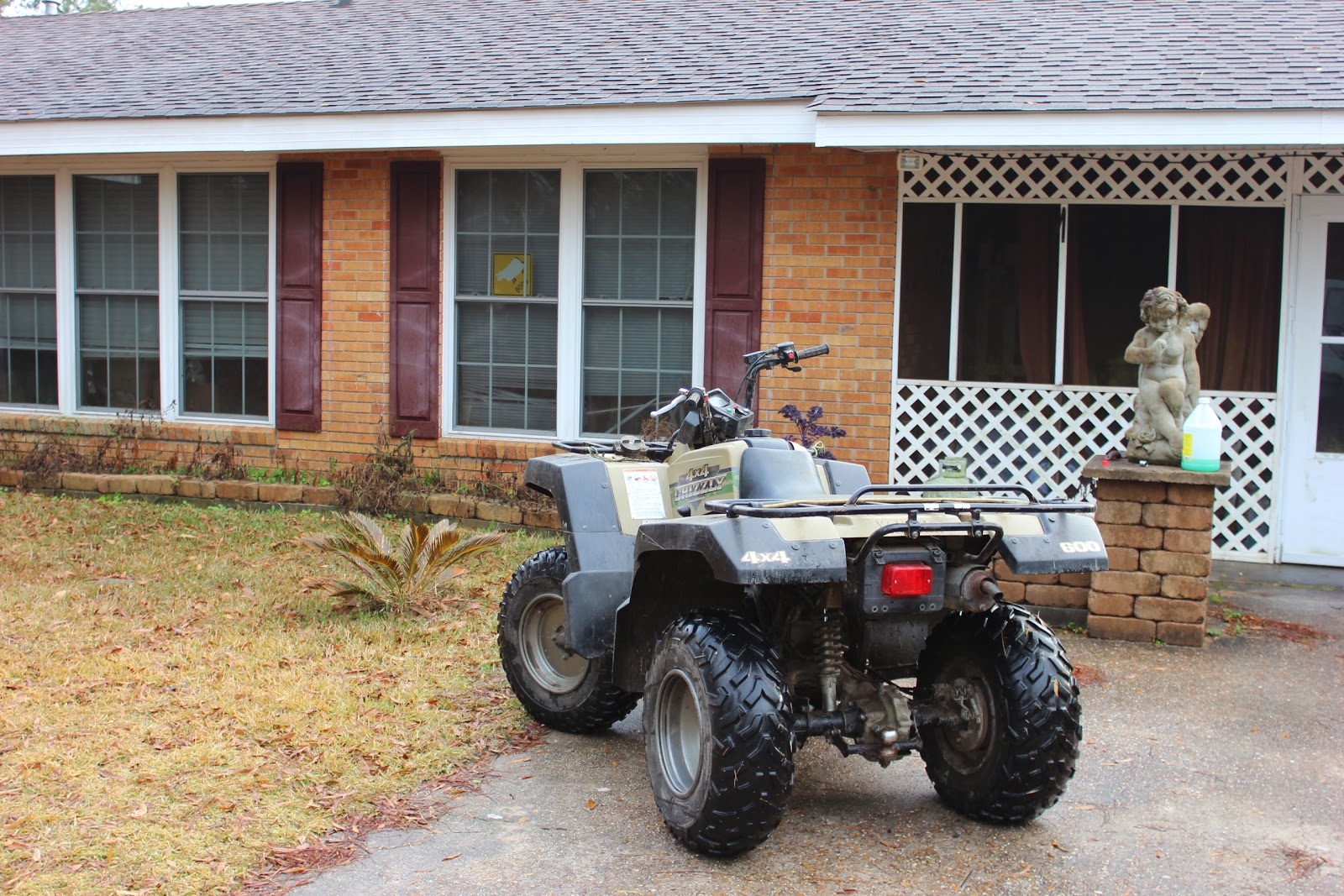 Speed back to the house to find that thank heavens the local ne're-do-well community is taking a day off. I empty one whole 5 gallon can into the bike and hop back on confident my problems for the day are over.

Sputter, sputter, sputter, cough, cough, nothing. Seriously?! Big Onion gets a second phone call, this one laced with expletives about where this bike can go stick it! Like that makes any sense at all.

From my description, Big Onion expertly diagnosed that the dohicky came off the thingamanbob and that I needed to loosen a lugsomthing and wiggle the whatsitsbucket back in place. I'm sure he used real words in there, in fact I distinctly remember the words carburetor and hose, but it might as well have been Latin for all I know about engine repair.

Once again, Big Onion patiently talked me through doing some minor repair during which I busted open at least one knuckle and found hidden reserves of goat turds deposited all over the bike. Loosen this, wiggle that, tighten this again and faith and begorrah the damn thing started!

I loaded that 300lbs of feed back on the bike AGAIN trying not to bleed on anything as fast as I could move and sped to the back, left the bike running while I unloaded it and didn't dare turn it off until it was safely parked under cover back where it belongs to take up its usual role as goat lounger and collector of pellets. Just to add insult to injury, can you believe, it started raining while I was unloading the feed!?

Just a typical day here on the farm.