O Mother, Where Art Thou?

Normally Kaela does the posting on our blog here (and an amazing job she does, at that) but after the events of a very cold evening last week, she asked that I recount my own story. I'll do my best to be brief ... but I can make no promises. 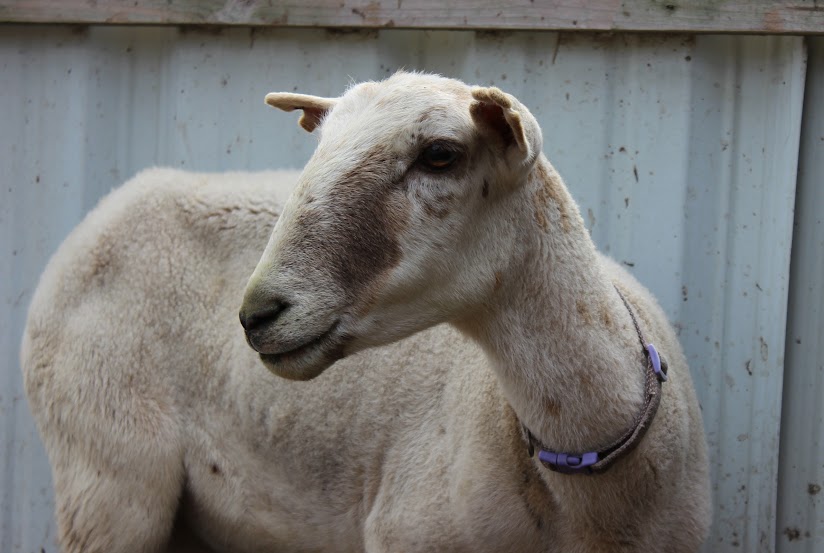 It was a dark and stormy night ... actually, it wasn't stormy and the sun had just set as I had finished putting away the birds so it wasn't really dark, but it was quite chilly. Kaela was at her day job so I was flying solo.  My normal order of operations is to put the birds away (which includes feeding, watering, and collecting eggs), feed and water the rabbits, drop something for the sheep to snack on since the winter has left little pasture for them, and then milk the goats. Since we've been expecting lambs I like to get a chance to do a headcount and a rear-end check. 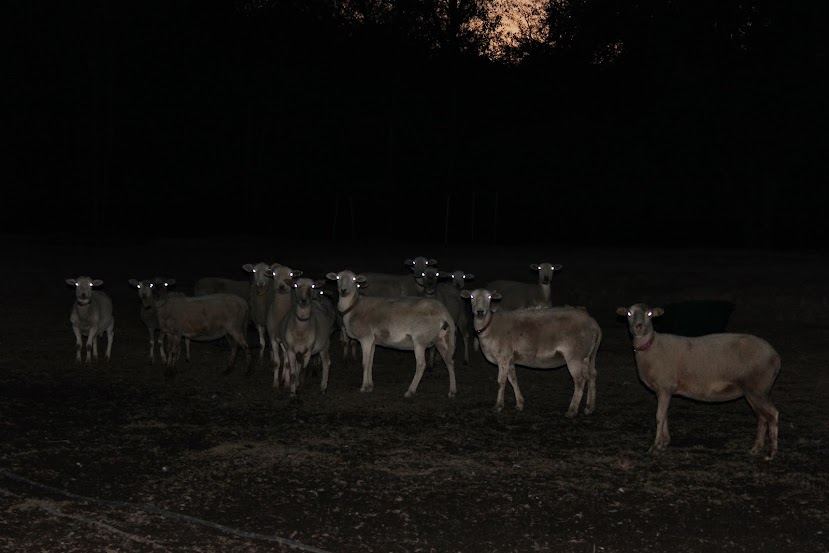 I dropped some feed in the sheep's usual spot and as the dusk turned to dark, I grabbed the spotlight to do my counting and check out some sheepbutts. I was halfway through counting when I spotted Bonita's (Bonnie's) backside ... with a bunch of blood on her legs and afterbirth hanging out. I've seen enough lambing and kidding to know what this meant: a baby was just born. Any lamb nearby? Nope.

Let's just say the string of profanity that came from my mouth would've made a sailor blush. It was getting cold, down in the 30s, and a lamb on its own wouldn't last very long. I had no idea how long ago she had lambed although it looked pretty fresh. The sheep have a spot along the fence they like to hang out at -- whether it was by luck or Divine Providence, I found him in the first place I thought to look. He was lying down on his side, covered in afterbirth, blood, and whatever else comes out with a newborn. I thought he was covered in dirt (although I'll find out later he was just born brown). He was breathing heavy -- I swore he was near death until I picked him up: sopping wet and still a little warm, which meant he had just been born. It was like she gave birth and took off running, screaming, "AHH! A BABY! RUN AWAAAAAY!"

He was breathing and his eyes were open but he was so freshly birthed that he hadn't really moved or anything yet. I immediately gathered him up, brought him over to where the sheep were gathered, put him on the ground and stepped back. Maggie, who has already birthed a couple lambs in the nearly two years since we've had her, immediately went over and started pawing at him, something mothers do to get their newborns to stand up. While he was getting his legs under him, Bonnie took a sniff and backed off. Behind her, Nina, our lead sheep, head butted her towards the baby. "Its yours, dummy. Go feed your baby!" She protested, "No, no! I don't want it!" and took some quick steps back.

Meanwhile, Maggie -- historically a terrible mother, I should note, but also very pregnant and due any day -- started responding to the baby's calls. Young lambs and their mothers learn to recognize each other by voice early on. The call and response is something you'll hear a lot in the pasture. To me, this was a problem: Maggie might establish herself as mother. While this was fine, I was unsure of the implications this might have on her current pregnancy but dammit I wanted to see Bonnie taking care of her own lamb. While Bonnie did her best to avoid any contact with the lamb, Maggie was all but thrusting her udder in the poor lamb's face. I grabbed her by the collar (there's a reason why we collar all of our ruminants) and struggled to hold her back while Nina kept butting Bonnie towards her offspring.

It wasn't working. The wind was picking up, the temperature was dropping, and this baby lamb was still soaked and needed to nurse. Babies need that first sip: the colostrum contains all sorts of good things to help build up the child's immunity and give it whatever nutritional boost it needs to be strong. If they miss this, we've found they end up weak, troublesome, and stunted in size: we still have three of the lambs we got last January who were all orphaned and, I presume, never got colostrum. The lambs that were born six months after them on our farm are already bigger than they are.

I had visions of bottle feeding baby lambs ... every couple of hours. All of that milk or milk replacer. The zombie calls of a hoard of lambs, swarming and nibbling and biting and suckling and eating my fruit trees and ... no. No, no, no. Not this time. She was gonna be a mom whether she likes it or not.


We happened to have an open pen so I scooped up the little wet and now shivering newborn, grabbed a leaf of hay from the feed shed, and set him up inside the pen while I spread some fresh hay. I needed to get my hands on Bonnie, who happens to be the most wild of our sheep. In the past this was an impossible task, but since the pasture is somewhat sparse she came over easy with the promise of some grain. I got her by the collar and half dragged her into the pen despite her best protests. Maggie was still calling outside and the baby was returning that call. I closed them up and went out to try and shoo away the others.

I finished up my chores and checked on them. The baby was in the corner, still a bit gooey and still shivering. I dried him off as best as I could with a towel and pushed him towards Bonnie. Any time he got close, she'd step away or butt him away. I grumbled amid visions of weak lambs and middle-of-the-night feedings and got serious: I put her head between my legs in a sort of headlock and shoved the baby under her. Still wobbly, he couldn't find his mark so I lent a hand. I felt like cheering when I heard that suckling sound I feel like I know so well and saw Bonnie do the instinctual crouching of the hips that these sheep and goat mothers seem to know how to do without any training. I kept her there while he drank and those terrifying visions of sleeplessness, milk replacer, and skeletoned lemon trees drifted away. At least tonight I'll sleep well knowing that he got that first sip from his own mother.

I made sure there was plenty of hay in the pen, I put out some extra feed for Bonnie, set up a bucket, and left them alone for a bit. The other sheep had wandered off so things were quiet: I heard the baby call, and Bonnie sort of grunt a response. That was a start.

Kaela finally made it home and apparently missed my frantic text messages and chats about the newborn. I breathlessly tried to recount everything that happened. We went into the pen with them and I held her again while the little boy nursed. We wanted a full belly on him if we were going to leave them overnight: in case he didn't get any nursing in on his own, I wanted to make sure he made it to morning. He drank until he was slightly milk-drunk and wobbly. Kaela took some of the placenta/afterbirth that was hanging from Bonnie (it takes awhile for them to pass that) and rubbed it on the little ram, trying to make it clear that this was little one was hers. Since Bonnie missed the bonding ritual of licking/cleaning the baby, we were hoping there might be some late reprise of it here, but she didn't seem too interested.

Content with the situation of the ram lamb, who we found was not dirty but colored a chocolate brown (not a typical color in our herd!), we decided to turn in for the evening and finish the rest of our indoor responsibilities: the milk was put away and the eggs stored. I've become accustomed to having to deal with a lot of odd things in these past two years, but the hilarity of some things doesn't always hit us until after it's happened. I told Kaela, rather matter-of-factly, "Honey, you have afterbirth on your forehead," and then carried on with whatever task I might have been doing at the time. We had a good laugh about it a good fifteen minutes later.

Brownie, as we named him, is doing well and Bonnie has accepted her role as mother. She seems to be doing an awesome job as the little guy is energetic and healthy. Maggie gave birth later that night to a little while ewe lamb we're calling Bumble Bee (it's a "B" year, after all!) -- we're hopeful that she will be a better mother (she was prone to wander off and forget where she parked her child) but it was nice to see that she was willing to take in a potential orphan.

Regardless, these moments humble me and remind me of how amazing life and nature and instinct can be, and make me proud to be doing the work that we do. However, I won't let us get careless with our successes: we've lost lambs in the past and it's always heartbreaking and devastating. Those failures have made us better as we've learned from our mistakes: we'll never know everything and there will always be loss, but for now, we will revel in the new life that spring brings.

We've got a few more sheep out there bagged up and seemingly ready to go any day. I hope their births are more uneventful than this, not for any lack of desire for adventure, but because we've never had to get involved with the sheep and I'd like to keep it that way. Hopefully we'll have some more lambs to keep these two company!
Posted by Big Onion at 11:05 AM