Barley vs the Cottonmouth

It seems that we have have been having a whole series of bad luck around the farm these days. In keeping with tradition, in the last week Gwen has managed to injure both her foot and her face. Poor thing is walking around with a limp and a swollen jaw. I whacked myself in the face with a crowbar then had the pleasure of being on the news with a shiner. But I think Barley wons the bad luck prize over the weekend by getting bitten in the face by a cottonmouth. 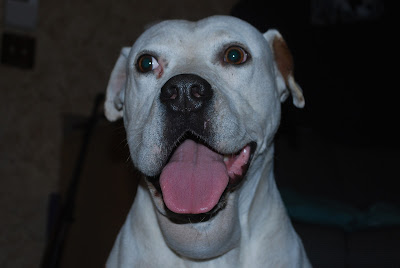 We had just come in from doing our evening chores when Big Onion noticed that his face looked a little odd. We brought him inside and found that half the poor guy's face was swollen and he had blood dripping from one side of his mouth. A closed inspection revealed several small puncture wounds inside the lip.

It was obviously painful so I got the vet on the phone and started treating him with homeopathics right away. We kept a very close eye on him for any breathing problems, but after getting a remedy he seemed to perk up and be feeling ok. 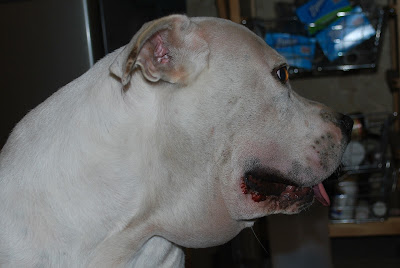 Meanwhile, Big Onion grabbed his trusty pellet gun and started shaking the bushes out back to find the culprit. He wasn't having much luck. Barley kept going to the back door so I let him out. He went straight to his dad and started helping with the hunt. Not 2 minutes later Big Onion saw him sniffing at some tall grass by the house then jump back and point. Our goofy dude actually pointed out the snake. That pellet gun made short work of the snake and we were able to confim that is was a cotton mouth. 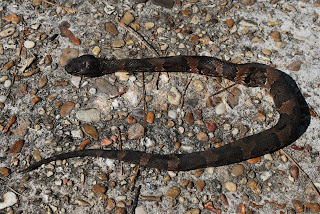 Thank goodness dogs aren't effected by snake bites in the same way as humans. By the end of the evening, most of the swelling had moved to a pocket under his chin. After a few days the swelling is pretty much gone, and he's left with just a couple little spots inside the lip that are slowly healing. 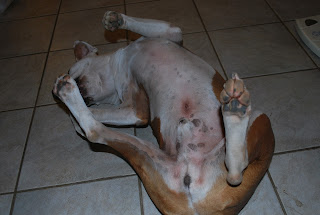 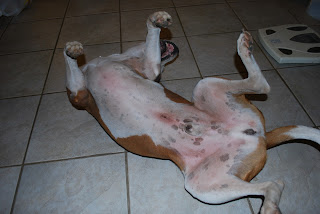 Barley's back to being his goofy self.
Posted by Kaela at 8:28 AM